Russian actress Lydia Johnson (1896 - 1969) made a few films in Russia, just before the revolution started. She fled to Turkey and finally settled in Italy, where she worked in vaudeville but also played small parts in films.

Vaudeville
Lydia (sometimes: Lidia) Johnson was born as Lydia Abramovic in Rostov, Russia in 1896. Before the revolution, she made some films like Doch Anny Kareninoi/Anna Karenina's Daughter (1916, Aleksandr Arkatov) and Litso Subdy/The Face of Fate (1917, V. Demert). Later in Italy she was mainly a vaudeville actress, though she had a lot of bit parts in Italian cinema from 1938 on, starting with Amleto Palermi's Le due madri/The Two Mothers (1938) with Vittorio de Sica. This continued also after the war, when she had small parts in Italian and Italo-British or Italo-French co-productions, such as Jean Renoir's French Cancan (1954), and Guardia, guardia scelta, brigadiere e maresciallo/Guard, Special Guard, Brigadier and Marshal (1956, Mauro Bolognini) with Alberto Sordi. Johnson was the mother of Neapolitan vaudeville actress Lucy D'Albert. Lydia Johnson died in 1969 in Naples. She was 73. 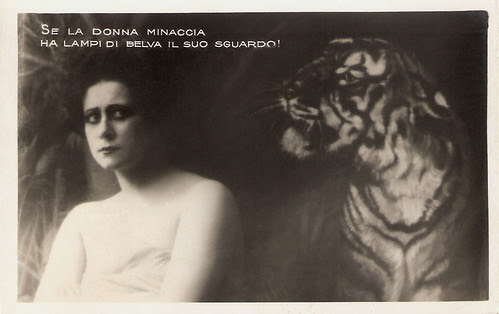 Italian postcard by G. Vettori, Bologna. Caption: When a woman menaces, she has the lights of a wild animal in her eyes. 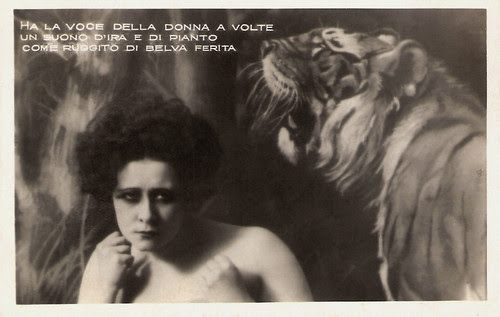 Italian postcard by G. Vettori, Bologna. Caption: A woman's voice sometimes has a sound of anger and sorrow like a growling wounded wild animal.

These are photos of my Grandmother..My mother, Joyce Culley, ran away from home at the age of 16 and came to America... . Only recently have I been able to see my Grandmother's face and hear her voice on the internet.


Thank you for posting these photos...they mean a lot to me.