Der Schatz im Silbersee/Treasure of Silver Lake (1962, Harald Reinl) was the most successful German film of the 1962/1963 season. Director Harald Reinl and producer Horst Wendlandt then created a series of Euro-westerns, all based on the novels by Karl May. Their next film, Winnetou - 1. Teil/Apache Gold (1963, Harald Reinl) was in fact a prequel to Der Schatz im Silbersee which introduced Apache chief Winnetou and told how he met Old Shatterhand. 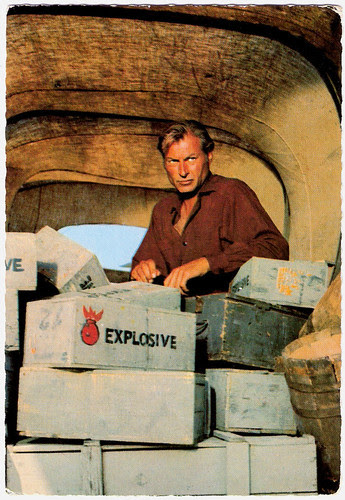 German postcard, E 9. Photo: Constantin. Still from Winnetou - 1. Teil/Apache Gold (1963) with Lex Barker as Old Shatterhand. Caption: "Old Shatterhand puts a rat in the ammunition and saves himself with a bold leap onto the horse. The remaining car, surrounded by Kiowas, explodes." 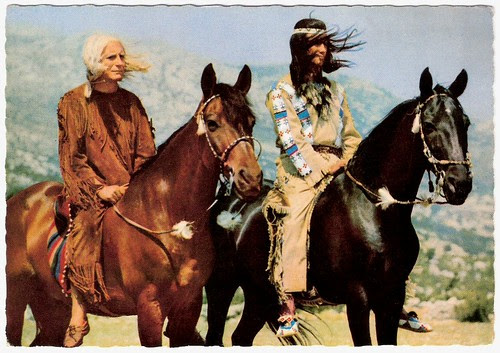 German postcard, no. E 14. Photo: Constantin. Still from Winnetou I/Apache Gold (1963, Harald Reinl) with Pierre Brice as Winnetou and Hrvoje Svob as Klekih-Petra. Caption: "Winnetou, outraged about all the atrocities of the invaders, rides with his white teacher Klekih-Petra to the final negotiations in the camp of the railway workers." 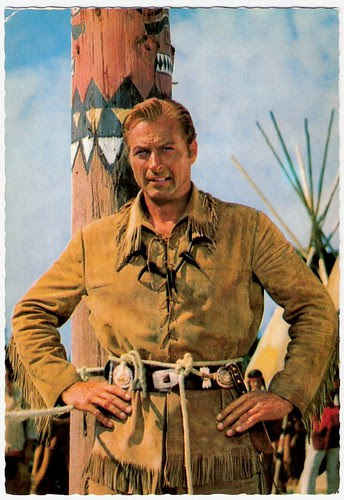 German postcard, no. E 23. Photo: Constantin. Still from Winnetou I/Apache Gold (1963, Harald Reinl) with Lex Barker. Caption: "Old Shatterhand has also been sentenced to die at the stake. He regrets emphatically, that he rescued Winnetou from the Kiowas. An ordeal by battle will decide."

Pierre Brice
The stars of Winnetou – 1. Teil were again Lex Barker as Old Shatterhand and Pierre Brice as Winnetou. They both came up with a fine performance and Brice became so popular that he would stay Winnetou throughout his whole life. First he played the native American chief in several film sequels during the 1960's. After the period of the Karl May films was over, Brice continued to perform the role on several stages in Germany and also in TV series. The cast of Winnetou – 1. Teil also included French actress Marie Versini as Winnetou’s sister Nscho-tschi, Mario Adorf as Frederick Santer - the bad guy who shoots Ntscho-tschi, Chris Howland as the comic Lord Tuff-Tuff, Ralf Wolter as Sam Hawkens, Mavid Popovic as Intschu-tschuna - Winnetou's father, and Dunja Rajter as Belle. Christian Wolff was the German voice of Winnetou. Principal shooting took place in national park Paklenica karst river canyon, Yugoslavia now Croatia. 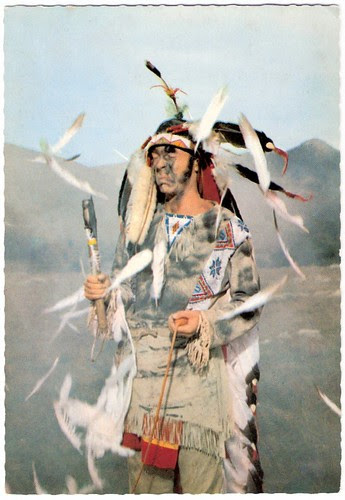 German postcard, no. E 21. Photo: Constantin. Still from Winnetou I/Apache Gold (1963, Harald Reinl) with Chris Howland. Caption: "What do you do as a reporter, when you get no Indian in front of your camera? You put on some make up and make a self portrait, here, unfortunately, it failed."

German postcard, no. E 22. Photo: Constantin. Still from Winnetou I/Apache Gold (1963, Harald Reinl) with Ralf Wolter as Sam Hawkens. Caption: "The conquering Apaches decide in the powwow to kill the white prisoners. The cranky Sam Hawkens just can't understand, why this is the way he has to go to the happy hunting ground."

Karl May
The storyline of every Karl May film is basically the same. The two friends Winnetou and Old Shatterhand try to solve the problems between red and white people and in the end they succeed, of course. According to Karl May's story, first-person narrator Old Shatterhand encounters Winnetou and after initial dramatic events, a true friendship between Old Shatterhand and the Apache arises. On many occasions they give proof of great fighting skill but also of compassion for other human beings. It portrays a belief in an innate ‘goodness’ of mankind. Karl May was with about 200 million copies worldwide one of the best selling German writers of all time. In the books of Karl May Winnetou became the chief of the tribe of the Mescalero Apaches (and of the Apaches in general, with the Navaho included) after his father Intschu-tschuna and his sister Nscho-tschi were slain by the white bandit Santer. He rode a horse called Iltschi (Wind) and had a famous rifle called Silberbüchse (The Silver Gun, a double-barrel rifle whose stock and butt were decorated with silver studs). Old Shatterhand became the blood brother of Winnetou and rode the brother of Iltschi, called Hatatitla (Lightning). Karl May's Winnetou novels symbolize, to some extent, a romantic desire for a simpler life in close contact with nature. In fact, the popularity of the series is due in large part to the ability of the stories to tantalize fantasies many Europeans had and have for this more untamed environment. 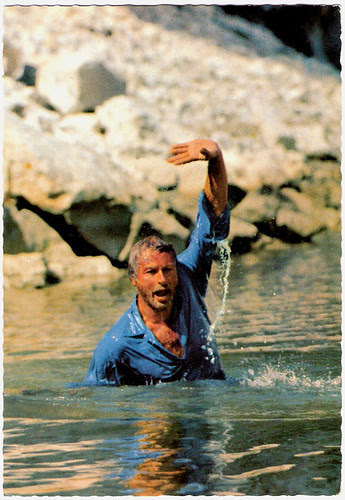 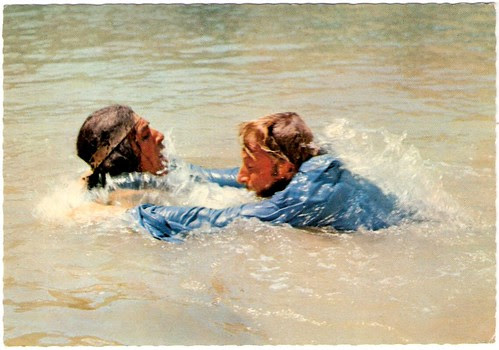 German postcard, no. E 25. Photo: Constantin. Still from Winnetou I/Apache Gold (1963, Harald Reinl) with Lex Barker and Mavid Popovic. Caption: "In the water there is a bitter fight between Old Shatterhand and Winnetou's father, the chief of the Apaches."

Karl May and the English Speaking World
"A thief, an impostor, a sexual pervert, a grotesque prophet of a sham Messiah!"..."The Third Reich is Karl May's ultimate triumph!" wrote Klaus Mann, son of Thomas Mann in 1940. To which Albert Einstein replied: "...even today he has been dear to me in many a desperate hour." Herman Hesse called his books "indispensable and eternal" and the writer and director Carl Zuckmayer even christened his daughter Winnetou in honor of May's great Apache chief. Yet, the English-speaking world is almost totally ignorant of May and his heroes Winnetou, Old Shatterhand or Kara Ben Nemsi and his Arab friend Hadji Halef Omar who shared many an adventure in what is now called Kurdistan just over a hundred years ago. The reason is simple. Almost none of May's books have ever been translated into English.

German postcard, no. E 31. Photo: Constantin. Still from Winnetou I/Apache Gold (1963, Harald Reinl) with Mario Adorf as Santer. Caption: "Santer and his gang are still looking for the Apache gold. Unnoticed they follow the course of the Indians to the hiding place of the treasure."