Singer ánd actor Jean-Claude Pascal (1927 - 1992) was one of the romantic lovers of the French cinema in the 1950’s. In 1961 he won the Eurovision Song Contest for Luxembourg singing Nous Les Amoureux. In 1981 he was less successful with the song C'est peut-être pas l'Amérique.

Passion for Acting
Jean-Claude Pascal was born as Jean-Claude Henri Roger Villeminot in Paris in 1927, into a family of textile manufacturers. In 1944, when he was 17, he voluntarily joined the 2e Division blindée (2nd Armored Division) with which he entered the still occupied Strasbourg. Pascal received the Croix de Guerre and later became a Commandeur des Arts et Lettres and Chevalier de la Légion d'honneur (Legion of Honor). After the Second World War, he first studied at the Sorbonne university, but he started his career as a fashion designer for Hermès. Later the handsome Pascal met Christian Dior and became his stylist and also his model. He designed the costumes for the stage production Don Juan by Molière, directed by Louis Jouvet. He then discovered his passion for acting. After attending the drama course of Arthur Ford, he made his stage debut in 1949, alongside Pierre Renoir and Edwige Feuillère in La Dame aux Camélias (Camille). Then he took the stage name Jean-Claude Pascal.

Romantic Lover
Tall, slender, dark eyed Jean-Claude Pascal became one of the romantic lovers of the French cinema in the 1950's. His first film as a jeune premier was in the Italian film Quattro rose rosse/Four Red Roses (1949, Nunzio Malasomma) opposite Olga Villi and Fosco Giachetti. In France he appeared with Pierre Fresnay in Un grand patron/Perfectionist (1951, Yves Ciampi). For this role his hair was coloured blond. The following years, he was often seen in costume opposite beautiful women in such films as Le rideau cramoisi/The Crimson Curtain (1953, Alexandre Astruc) and Les Mauvaises rencontres/Bad Liaisons (1955, Alexandre Astruc) both with Anouk Aimée, Le Chevalier de la nuit/Knight of the Night (1953, Robert Darène) with Renée Saint-Cyr, Le Grand Jeu/Flesh and the Woman (1954, Robert Siodmak) with Gina Lollobrigida, Le Salaire du péché/The Wages of Sin (1956, Denys de La Patellière) opposite Danielle Darrieux, and Die schöne Lügnerin/The Beautiful Lier (1959, Axel Von Ambesser) with Romy Schneider. Although he often played a romantic womanizer on screen, there was no woman in his private life, except for his beloved mother. The French site Hexagon Gay writes that Pascal was gay and liked men: "Only the artistic and gay at the time were aware because it is totally excluded to reveal such an orientation in a society where homophobia is still the rule. (...) The longest relationship he maintained, was with the actor Jean Chevrier, who died in 1975." 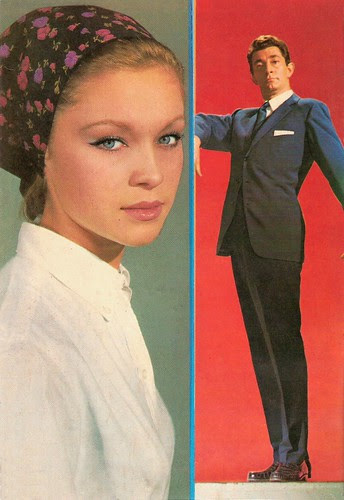 Eurovision
The filmmakers of the Nouvelle Vague were not interested in Jean-Claude Pascal. His film work diminished in the 1960's and he switched to singing chansons such as Lily Marlene in both German and French. His sultry, deep voice served sensitive interpretations of songs of such (then) young writers as Guy Béart, Serge Gainsbourg and Jean Ferrat. In 1962, he was awarded the Prix de l' Académie Charles-Cros for it. In 1961 he won the Eurovision Song Contest for Luxembourg singing Nous Les Amoureux (We the Lovers) with music composed by Jacques Datin and lyrics by Maurice Vidalin. Twenty years later he represented Luxembourg again at the Eurovision Song contest 1981 with C'est peut-être pas l'Amérique (It may not be America) but finished 11th of 20. He composed the words and music of this song himself along with Sophie Makhno and Jean-Claude Petit. In the meantime he incidentally played in such light entertainment films as Le Rendez-vous/Rendezvous (1961 Jean Delannoy) with Annie Girardot, the Spanish comedy Las 4 bodas de Marisol/The Four Marriages of Marisol (1967, Luis Lucia) opposite the young Spanish idol Marisol, and Angélique et le Sultan/Angelique and the Sultan (1968, Bernard Borderie) with Michèle Mercier. His last film was the German Krimi Unter den Dächern von St. Pauli/Under the Roofs of St. Pauli (1970, Alfred Weidenmann). In the 1970's he worked for television and the stage and in the 1980's he wrote detective novels and historical portraits, like L'Amant du roi (The King's Lover) and Marie Stuart (Mary Stuart). In 1986 he published his autobiography Le Beau Masque (The Beautiful Mask). In 1992 Jean-Claude Pascal died of lung cancer in Clichy-la-Garenne, near Paris. He was 64. There was not much media attention for the passing of this quite forgotten star, who had been so popular during the 1950's and 1960's.