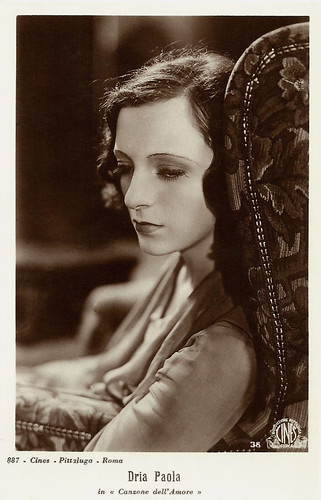 Exotic and Mysterious
Dria Paola was born Pietra Giovanna Matilde Adele Pitteo in Rovigo, Italy in 1909, as the daughter of Arturo Pitteo, owner of hunting arms store and Ione Volebele, a cafe owneress. Already at a young age, little Etra showed artistic temperament, dancing at he age of three and reciting when she was ten. She initially worked for he company of Carlo Lombardo. After adopting the exotic and mysterious name of Dria Paola, she managed to get a small part as Neda in the late silent epic Gli ultimi giorni di Pompei/The Last Days of Pompeii (1926, Carmine Gallone, Amleto Palermi) starring Victor Varconi, Rina De Liguoro and Maria Corda. A more substantial part Paola had in the late silent film Sole!/Sun! (1929), Alessandro Blasetti's debut as film director on the drainage and cultivation of the marshlands near Rome, the Agropontino. Unfortunately less than a quarter of the film remains, while the nazi’s destroyed the negative during the war. Sole! wasn’t a public success, but Paola was more fortunate with her successive film, La canzone dell’amore/The song of love (1930, Gennaro Righelli), the first Italian sound feature, entirely produced in Italy. The quite absurd story about a young woman who adopts the baby her mother gave birth to, was taken from a story by Luigi Pirandello, In silenzio (In Silence). While her mother dies giving birth, Lucia adopts little Ninni, pretending to her fiancé Enrico (Elio Steiner) and her landlady it is her own child. Lucia breaks up her engagement with Enrico, who is about to become a big musician. Lucia’s rival Anna, played by another upcoming star: Isa Pola, gets hold of Enrico. But when Lucia and Enrico meet again in the big record store where Lucia works and Enrico is making a record, he admits he still loves her. The father of the child (Camillo Pilotto) shows up and claims the child. Heartbroken, Lucia gives in but tries to commit suicide afterwards. Just in time Enrico saves her, the father gives the child to Lucia and all is well. The film opens and closes with images of Rome, and is actually one of the few Italian films from the 1930's showing the city repeatedly. Stylistically important are the different moments of double framing, when Lucia looks out from her rented rooms and mimics neighbours how to change diapers and feed the child. Interesting is also Righelli’s visualisaton of Lucia’s frenzy at her suicide attempt and his pans across the enormous set of the record store. La canzone dell’amore had its premiere on 7 October 1930 at the Supercinema in Rome (the actual Teatro Nazionale). The film was a popular success, not in the least because of the music composed by Cesare Andrea Bixio, whose well-known song Solo per te Lucia became a hit as well. The film also caused two foreign remakes, one in German Liebeslied/Love Song (1931, Constantin J. Davis) and one in French, La dernière berceuse/The last lullaby (1931, Jean Cassagne). 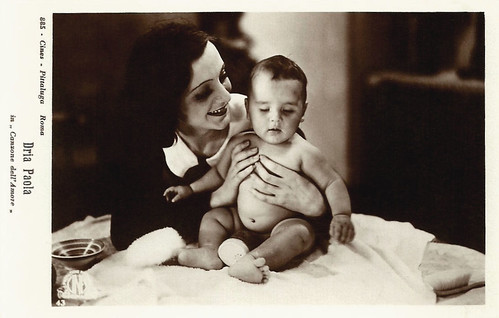 Clumsy Damsel in Distress
Dria Paola was a star overnight. By now the thin actress with the big head and fluttering hands was typecasted as the fragile and sometimes clumsy damsel in distress. At the death of her father in 1932 she moved to Rome with her mother. Her films included the avant-garde film Vele ammainate/Furled sails (1931)- the only sound film by Anton Giulio Bragaglia, the biopic Pergolesi (1932, Guido Brignone), and Fanny (1933, Mario Almirante), based on Marcel Pagnol’s famous play, the sequel of his Marius. While audiences liked Fanny, the press considered the film too stagey. The same happened with the original French adaptation, Fanny (1932, Marc Allégret). Then, Paola played a department store worker opposite a young Vittorio De Sica as a shoplifter in Il signore desidera?/Mr. Desire (1933, Gennaro Righelli). Her following leads were in La fanciulla dell’altro mondo/The girl from another world (1934, Gennaro Righelli) and La cieca di Sorrento/The Blind Woman of Sorrento (1934, Nunzio Malasomma), while she played supporting parts in Il colpo di vento/The blast (1936, Carlo Felice Tavano) starring Ermete Zacconi, and L’albero di Adamo/Adam's Tree (1936, Mario Bonnard) starring Elsa Merlini. Righelli gave Paola a lead again in the Pirandello comedy Pensaci, Giacomino!/Think It Over Jack (1936, Gennaro Righelli) starring Angelo Musco as a professor who marries his caretaker´s daughter, who is pregnant. After supporting roles in the Raffaele Viviani drama L’ultimo scugnizzo/The last urchin (1938, Gennaro Righelli), L’albergo degli assenti/The property of the absent (1939, Raffaele Matarazzo), and Lotta nell’ombra/Fight in the shade (1939) by former acrobat turned director Domenico Gambino, Righelli provided another female lead for Paola in the historical drama Il cavaliere di San Marco/The Knight of San Marco (1939, Gennaro Righelli), starring Mario Ferrari. After a bit part in La grande luce/The great light (1939, Carlo Campogalliani), Paola had a substantial part opposite Camillo Pilotto and Germana Paolieri in the naval spie story Traversata nera/Crossing the black (1939, Domenico Gambino). Paola also had a major supporting part in Guido Brignone’s musical comedy La mia canzone al vento/My Song to the Wind (1939) with Laura Nucci and the female lead in La notte delle beffe/The Night of Tricks (1939, Carlo Campogalliani), opposite Amedeo Nazzari. Paola’s last parts were in the drama Cuori nella tormenta/Tormented Hearts (1940, Carlo Campogalliani) and La pantera nera/The Black Panther (1942, Domenico Gambino) starring Leda Gloria. Dria Paola then retired. Later she published her autobiography and did sporadic performances on stage and on television. One last film appearance was in the drama Cortile/Courtyard (1955, Antonio Petrucci) starring Edoardo De Filippo. In 1993, Dria Paola died completely forgotten in Rome, at the age of 83. 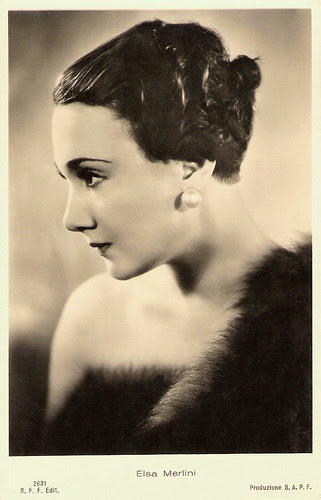