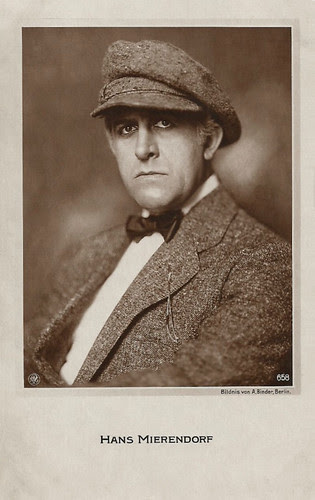 Tonbilder
Hans Mierendorff was born Johannes Reinhold Mierendorff in Rostock, Germany in 1882, as the son of the merchant Carl Mierendorff and painter Johanna Reinke. He frequented the Oberschule in Rostock and the grandducal gymnasium in Doberan. After an initial career as bookshop seller in Schwerin he had acting lessons at the Hoftheater in Schwerin, and soon switched to a stage career, performing in Hamburg, Halle and Breslau. Between 1911 and 1919 he worked in Berlin on various stages: at the Residenztheater, the Lessingtheater, the Deutsche Künstlertheater and the Meinhard-Bernauer-Bühnen. From 1909 on, Mierendorff was also appearing in the so-called Tonbilder or early sound films by Franz Porten, but thanks to the mediation of Henny Porten’s husband, director/actor Curt Stark, Mierendorff’s real first performance in a silent fiction film was in the Henny Porten-Film Das Adoptivkind/The adoptive child (1911, Rudolf Biebrach). In the same year he played next to Asta Nielsen as her father in Der fremde Vogel/The strange bird (1911, Urban Gad). Often Mierendorff performed as the elegant, distinguished gentleman. From 1916 his career took a new turn, when he started to perform as the gentlemen-detective Harry Higgs, cashing in on the popular trend of German detective films at the time. The films were scripted by E.A. Dupont, later by Rudolf Meinert. Mierendorff was also successful as Baron Murphy in the eight part adventure serial Die Herrin der Welt/Mistress of the World (1919), produced and partly directed by Joe May and starring Mia May.

Lucifer
Hans Mierendorff’s detective films were so successful, that he could found his own film company Lucifer-Film GmbH in 1919. He managed Lucifer-Film until its sellout in 1923. He directed some of the films as well, while others were directed by James Bauer. In his own productions, mostly adventure and crime films, he often played the leads, as in Teufelskirche/The Devil's Church (1919, Hans Mierendorff). In this film Mierendorff plays a priest who is seduced by a farmer’s wife (Agnes Straub), who acts on behalf of the devil (Paul Rehkopf) who wants to found a devil’s church on the place of German village chapel. In the end it proves to be just somebody’s nightmare. Remarkable was Mierendorff’s dual role in Ich bin Du/I am you (1921, Hans Mierendorff, Urban Gad). Other memorable roles were that of Fiesco in Die Verschwörung zu Genua/The Genoa Conspiracy (1921, Paul Len), co-starring Erna Morena and Fritz Körtner, Lee Parry’s father in Die Motorbraut/The Motor Bride (1925, Richard Eichberg), and the industrial in Der Mann der sich verkauft/The man who sells himself (1925, Hanns Steinhoff), co-starring Vivian Gibson and Olaf Fjord. In the mid-1920's, Mierendorff was often cast as banker, industrialist, consul, manager, or lawyer. In the sound film era Mierendorff only performed as supporting actor and in 1945 he completely withdrew from film acting. Subsequently, he ran a pension at the Ostseebad Scharbeutz. Since 1903 he was married to animal painter Gertrud Schmidt. In 1923 he remarried with singer and actress Auguste Herta Katsch. From this marriage their son Klaus (1923 - 1966) stemmed. In 1940 Mierendorff married for the third time with Auguste’s sister Antonie Katsch. Hans Mierendorff died in 1955 in Eutin, Germany. 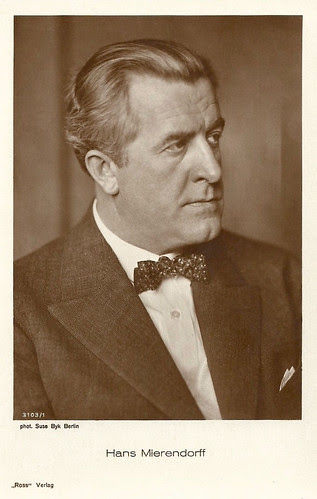