Thanks to his good looks and impressive physique, Italian actor Renato Salvatori (1933 - 1988) became a popular star of the European cinema of the 1950's and 1960's. He reached his apex as Simone in Luchino Visconti’s masterpiece Rocco e i suoi fratelli/Rocco and His Brothers (1960).

Italian postcard by Bromofoto, Milano, no. 1296.

Handsome and Muscular Baywatch
Renato Salvatori was born Giuseppe Salvatori in Seravezza, near Lucca, in 1933. He was the son of a marble mason. When he was 18 and bay-watching at a small seaside resort near Forte dei Marmi, Salvatori was discovered by Italian film director Luciano Emmer. The handsome and muscular baywatch landed a part in the romantic drama Le ragazze di Piazza di Spagna/Girls of the Spanish Steps (1952, Luciano Emmer) starring Lucia Bosé. Salvatori had his first lead opposite May Britt in the adventure Jolanda la figlia del corsaro nero/Jolanda, the Daughter of the Black Corsair (1954, Mario Soldati). Salvatori’s popularity grew enormously thanks to his part of Salvatore in Dino Risi’s trilogy Poveri ma belli/A Girl in Bikini (1956), Belle ma povere/Poor Girl, Pretty Girl (1957) and Poveri milionari/Poor Millionaires (1958), also with Maurizio Arena and Marisa Allasio. He also knew public success with the two-part comedy La nonna Sabella (1957, Dino Risi) and La nipote Sabella (1958, Giorgio Bianchi), next to Peppino de Filippo and Sylva Koscina. Succes was even bigger with the classic crime comedy I soliti ignoti/Big Deal on Madonna Street (1958, Mario Monicelli) about a gang of clumsy burglars (including Vittorio Gassman, Marcello Mastroianni, Salvatori and others), while Claudia Cardinale played Salvatori’s girlfriend. Its success propelled the sequel Audace colpo dei soliti ignoti/Hold up à la milanaise (1960, Nanni Loy), again with Gassman and Cardinale. 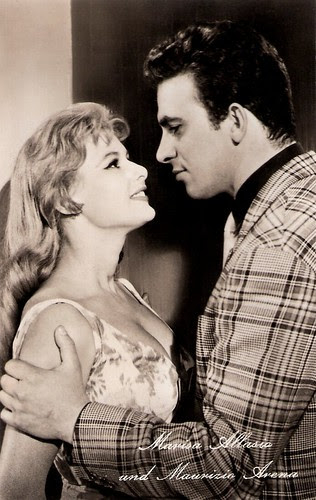 Rocco's Eldest Brother
Renato Salvatori was also a good dramatic actor in such films as I magliari/The Magliari (1959, Francesco Rosi) with Alberto Sordi, La ciociara/Two Women (1960, Vittorio De Sica) with Sophia Loren, and Era notte a Roma/Blackout in Rome (1960, Roberto Rossellini) with Giovanna Ralli, but Salvatori’s fundamental part was that of Simone in Rocco e i suoi fratelli/Rocco and his Brothers (1960, Luchino Visconti). Simone is the eldest brother of a fatherless and poor family from a village in southern Italy who come to Milan seeking a better life. When Simone’s girlfriend, the prostitute Nadia (Annie Girardot), prefers his younger brother Rocco (Alain Delon) to him, he rapes her in front of his brother. Reduced to an outcast and ridiculed by his former friends after his boxing career has faltered - while that of Rocco is summiting - Simone takes revenge on Nadia. In real life, Salvatori and Girardot treated each other quite differently. Salvatori met her on the set of the film, they fell in love and married two years after. Salvatori also became close friends with Delon. Other memorable performances of Salvatori’s film career were in Un giorno da leoni/A Day for Lionhearts (1961, Nanni Loy), La banda Casaroli/The Casaroli gang (1962, Florestano Vancini) and I compagni/The Organizer (1963, Mario Monicelli), or polemic and counter-cultural films such as Smog (1962, Franco Rossi), also with Girardot, the science-fiction comedy Omicron (1964, Ugo Gregoretti), and Una bella grinta/The Reckless (1965, Giuliano Montaldo), films that wanted to give an Italian answer to the French Nouvelle Vague. Salvatori’s last important roles were in Queimada/Burn (1969, Gillo Pontecorvo) starring Marlon Brando, and in La prima notte di quiete/Indian Summer (1972, Valerio Zurlini), again next to Alain Delon.