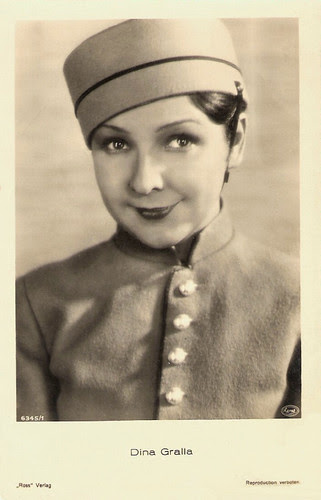 Naive and Sexy
Dina Gralla was born as Dina Sventen in Warsaw, Poland, Russian Empire (now Warsaw, Poland) in 1905. She had a dance training in 1919 and performed as a ballet dancer at the revue of the Wintergarten theater in Berlin. After some private acting lessons from Walter Steinbeck she appeared in the film drama Leidenschaft/Passion (1925, Richard Eichberg). From then on she was seen regularly in German silent films in roles as a naive, sexy girl, often appearing with Lilian Harvey, like in Die Kleine vom Bumme/The Little Girl from Bummel (1925, Richard Eichberg) and Prinzessin Trulala/Princess Trulala (1926, Erich Schönfelder, Richard Eichberg). Repeatedly she played dancers, most famously in the leading part of the hit revue film Das Girl von der Revue (1928, Richard Eichberg) with Werner Fuetterer. Other films included Die Tolle Komtess/The Crazy Countess (1928, Richard Löwenbein) with Max Ehrlich and Werner Fuetterer, Ein Kleiner Vorschuß auf die Seligkeit/A Small Down Payment on Bliss (1929, Jaap Speyer) opposite Paul Hörbiger, Wer wird denn weinen, wenn man auseinandergeht?/No Use Crying If Your Sweetheart Goes Away (1929, Richard Eichberg) with Paul Morgan. She also worked as a stage actress, for example at the Theater an der Behrenstraße. 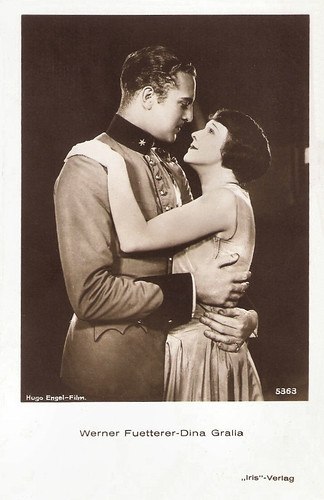 Tuberculosis
Despite her Polish accent Dina Gralla could continue her film career into the sound era. She appeared in such comedies as Keine Feier ohne Meyer/No Celebration Without Meyer (1931, Carl Boese) with Sig Arno, Der Liebesarzt/Doctor Love (1931, Erich Schönfelder) opposite Harry Liedtke, Der Liebesexpreß/Eight Days of Happiness (1931, Robert Wiene) with Georg Alexander, Die Schwebende Jungfrau/The Soaring Maiden (1931, Carl Boese) with Lissi Arna and Szöke Szakall, and Ein Auto und kein Geld/A Car and No Money (1932, Jacob Fleck, Luise Fleck) with Paul Kemp. Tragically, in 1933 tuberculosis developed in her lungs, and she had to retire. Her final role was in Grüß' mir die Lore noch einmal/Say Hello to Lore for me one more time (1934, Carl Heinz Wolff). In the following decade she worked as a stenotypist, and after 1945 as a cleaning lady and a waitress, and finally she worked at a Berlin library. Dina Gralla returned one last time for the cameras in the revue film An jedem Finger zehn/Ten on Every Finger (1954, Erik Ode). She died in 1994, in Berlin-Charlottenburg. 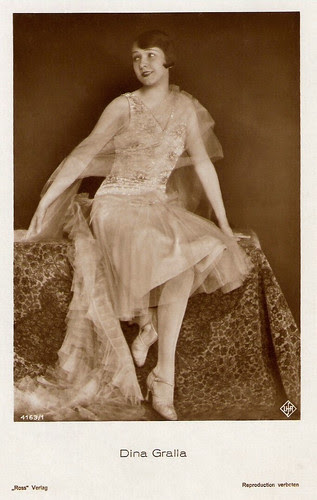