Glamorous German actress Erica Beer (1925) was hailed by the German press as a cross between Marilyn Monroe and Marlene Dietrich. She played seductive vamps in several German and international films of the 1950’s. Her private life was filled with tragedies. 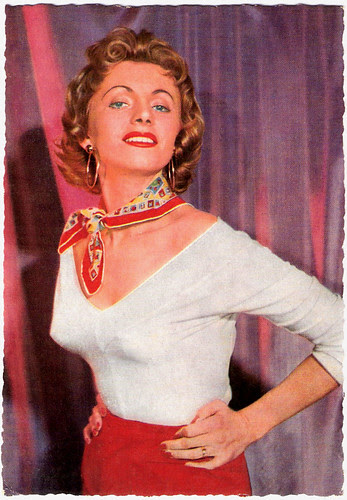 The New Blue Angel
Erica Konstanze Beer was born in Munich, Germany in 1925. She was the daughter of merchant Joseph Beer and his wife Katharina Konstanzia Faltermeier. Erica trained to become a nurse and also took acting lessons with Beate von Molo. She started her career on the Munich stage at the Kleine Komödie. In 1949 her son, Michael Konstantin, was born. His father was an American. Beer worked on stage in German cities as Bonn, Darmstadt, Frankfurt, Stuttgart, Wiesbaden, and in Munich, where she played at the famous Kammerspiele. She also appeared in Switzerland. Among her most successful plays were stage versions of the films Born Yesterday, Ninotschka and Der blaue Engel/The Blue Angel. The German press hailed her as a cross between Marilyn Monroe and Marlene Dietrich. In 1952 she made her film debut in the drama Gefangene Seele/Captured Soul (1952, Hans Wolff) with Attila Hörbiger. From then on, she played supporting parts in several German films, often as a seductive vamp. In 1954, it was announced that she would star in the remake of The Blue Angel. The part eventually went to May Britt. In 1956 she finally had her first lead role in a film, in the mediocre Heimatfilm Schwarzwaldmelodie/Black Forest Melody (1956, Géza von Bolváry) opposite Claus Biederstaedt. The film was not a success and Beer continued to play supporting parts. In 1957 she married internationally renowned, Austrian-born screenwriter Robert T. Thoeren. He was 21 years her senior and had a daughter, Nina, from a previous marriage to a French painter. Thoeren adopted Erica’s young son. Later that year Thoeren died at age 53 from a cardiac weakness following a car crash while driving from Munich to Zurich. The next year Erica visited Hollywood. Actor William Holden invited her to his pool, and producer Sam Spiegel escorted her to the theatre. She was considered to play in the upcoming The Guns of Navarone. Again, nothing came from it. 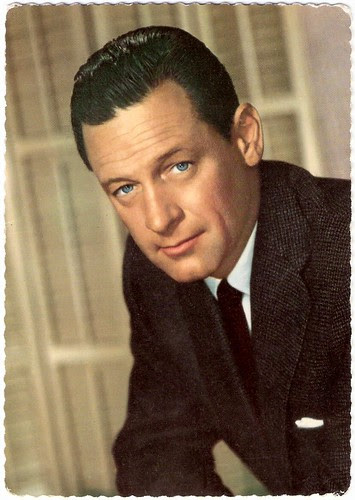 Child Kidnapper
In 1960, Erica Beer’s 18-year-old stepdaughter Nina was murdered by a sex offender, who gave her a ride home from her university in Los Angeles. Beer inherited the fortune, left by Thoeren to his daughter in 1957. She then received a phone call ordering her to pay 20,000 DM to prevent her son from being kidnapped. The threat turned out to be a hoax by her former astrologer, Wilhelm Grasmugg. She returned to Germany where she appeared on the Munich stage in Die Comtessa Coralli (Countess Coralli). She also played in more German films. In the Edgar Wallace Krimi Der rote Kreis/The Crimson Circle (1960, Jürgen Roland) she played a child kidnapper. On TV she was seen in the mini-series Das Halstuch/The Scarf (1962, Hans Quest), based on a thriller by Francis Durbridge. The series became a phenomenal success. Stephanie D’heil at Steffi-Line writes: “It was a real mass hypnosis. The six episodes each took only 35 to 40 minutes but the mystery kept the spectators at home. Towns and villages seemed deserted. Bar owners, club presidents, adult education school teachers, theater and cinema owners, all faced an empty house at the evenings the series was transmitted on TV. In modern words it was a blockbuster. The legendary Krimi blew up everything in the young history of television.” Then, Beer finally did co-star with William Holden in an American production, the spy thriller The Counterfeit Traitor (1962, George Seaton), shot in Germany and Scandinavia. Her later films include the comedy DM-Killer (1965, Rolf Thiele) starring Curd Jürgens, and Nicht fummeln Liebling/No Pawing, Darling (1970, May Spiels) with Gila von Weitershausen. More interesting were two English-language films she made with Polish director Jerzy Skolimowski. Deep End (1970, Jerzy Skolimowski) is a beautiful Coming-of-Age drama in which a teen-aged London bathhouse attendant (John Moulder-Brown) falls in love with an older colleague (Jane Asher). Hal Erickson writes at AllMovie: “Deep End observes how adolescent obsession can mushroom into disaster if one doesn't have the emotional equipment to cope”. In King, Queen, Knave (1972, Jerzy Skolimowski), young orphan Frank (John Moulder Brown) finds himself deep in the romantic clutches of the sensual wife (Gina Lollobrigida) of his uncle (David Niven). This satirical drama was based on a novel by Vladimir Nabokov. In all these films, Beer merely played supporting parts. Throughout the next decades she continued to appear on the Munich stages and incidentally on TV, most recently in the crime series Eurocops (1989). Erica Beer lives outside of Munich, Germany.