Lilly Jacobson (1893 - 1979) aka Lilly Jacobsson, was a Swedish actress who starred in Swedish and Danish silent films by a.o. Eric Malmberg, Mauritz Stiller and Holger-Madsen. She was the star of the popular Danish film The Maharaja's Favourite Wife (1917).

SS Lusitania
Lilly Jacobsson was born in Göteborg, Sweden, in 1893. She made her film debut at AB Svenska Biografteatern in 1911, and collaborated at various Swedish films until 1914. First she played in films by Eric Malmberg, with himself often in the male lead. Her first film was Opiumhålan/The Opium Den (1911, Eric Malmberg). It was shot in various Swedish cities such as her native town Göteborg, but also in Paris, Monte Carlo and aboard the SS Lusitania, going to New York. The next film Bränningar eller Stulen lycka/Burnings or Stolen Luck (1912, Eric Malmberg) repeated the pick of locations, again including a transatlantic trip with the Lusitania. The third film of Jacobsson and Malberg, Det gröna halsbandet/The Green Necklace (1912) all evolved in Göteborg. Jacobsson then played the female lead in a film by Georg af Klercker: Musikens makt/The Power of Music (1912), again partly shot in Göteborg. Next came the farce Kolingens galoscher/Kolingen’s Boots (1912, Eric Malmberg), in which Jacobsson played a millionair’s daughter. It was then time for another transatlantic trip, resulting in Samhällets dom/The Judgment of Society (1912), aboard the Lusitania to New York. The trip also resulted in a short documentary Med Lusitania till Amerika/Med 2.300 Passagerare ofver Atlanten. Samhällets dom was released in February 1912, two months before the sinking of the SS Titanic, sistership of the Lusitania. The documentary was released one week after the naval disaster. Malmberg and Jacobsson then exploited their ocean trip for Tva svenska emigranters äfventyr i Amerika/The Adventures of Two Swedish Emigrants in America (1912), which also included shots made in New York and at Niagara Falls.

Tell from the War Dogs School
Back in Sweden Lilly Jacobson played the female lead as the daughter opposite Anna Norrie as the mother, in Mauritz Stiller’s debut as film director: Mor och dotter/Mother and Daughter (1912). Next came Stiller’s När larmklockan ljuder/When the Alarm Bell Rings (1913, Mauritz Stiller). The film was partly shot in and around the Swedish town Solleftea. Officers and soldiers of the local regiment Kungl Västernorrlands collaborated as extras, while the Airdale terrier Tell from the war dogs school had also a part in the film. Stiller and Jacobsson worked together for a third time at Gränsfolken/Brother Against Brother (1913, Mauritz Stiller), based on Emile Zola’s Le débacle (The debacle). The film had a huge international release. For a long time Gränsfolken/Brother Against Brother was considered lost, until a print was found in Poland in 2009. Stiller and Jacobsson then did När svärmor regerar/When the Mother-in-Law Reigns (1914, Mauritz Stiller). It was based on a Finnnish play Stiller had directed on stage. In their next film, För sin kärleks skull/Because of her love (1914, Mauritz Stiller), Jacobsson had a secondary role – the female lead was for Lilly Bech - while the male lead was for Victor Sjöström. Jacobsson then acted in another Af Klercker film: För fäderneslandet/For the Fatherland (1914), shot in Svenska Bio’s film studio in Stockholm, and in a studio in Kopenhagen, while exteriors were filmed in Solleftea. Jacobson returned to Stiller for Stormfågeln/Stormy Petrel (1914, Mauritz Stiller), with again Bech in the female lead. It was shot both in Stocholm and in and around the train station of Åre. Lilly Jacobson’s penultimate Swedish film was Strejken/Strike (1915, Mauritz Stiller), again with Sjöström in the lead, while the last one was directed by Sjöström himself: En av de många/One of the Many (1915), which starred Gunnar Tolnaes and Lili Bech. 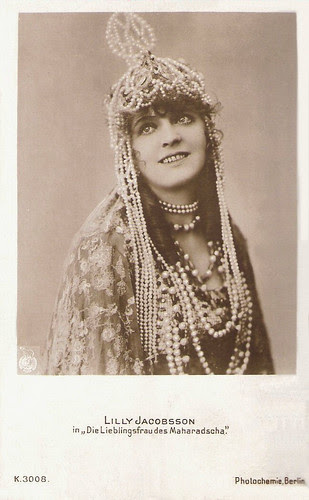 The Maharaja’s Favourite Wife
In 1916 the Danish company Nordisk was looking for a new star. Lilly Jacobson was chosen from hundreds of competitors and became the leading actress in Maharadjahens Yndlingshustru/The Maharaja’s Favourite Wife (1917, Robert Dinesen, Svend Gade), in which she performed as Elly who enters the harem of an Indian maharaja, played by Gunnar Tolnaes. The film was such a success that Nordisk made a sequel: Maharadjahens Yndlingshustru II/The Maharaja's Favourite Wife II (1919, August Blom). In between Jacobsson played in various Danish films, mostly directed by Holger-Madsen. These films included the science fiction-film Himmelskibet/400 Million Miles From Earth (1918, Holger-Madsen) starring Nils Asther, Folkets ven/Friend of the People (1918, Holger-Madsen), and Mod Lyset/Towards the Light (1918, Holger-Madsen) starring Asta Nielsen. She played a cold, partying woman who neglects religion, but later on repents and becomes the wife of a preacher man (Alf Blütecher) who takes care of the poor. The film eventually resulted in Jacobson playing Ophelia in Asta’s famous production of Hamlet (1921, Svend Gade, Heinz Schall), in which Nielsen played the title role herself. In 1919 Lilly Jacobson married director Corbett Edwards in Odense (Denmark), which ended her film career. She died in 1979 at the age of 86.