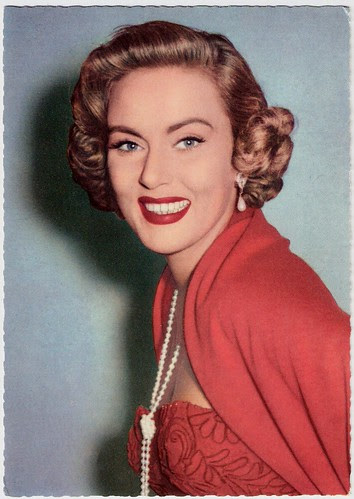 Anarchist Incident
Nadia Gray (sometimes Nadja Grey) was born Nadia Kujnir-Herescu in Bucharest, Romania in 1923. She came from an old Jewish family. Her father was a Russian refugee and her mother was Bessarabian. As a child she was such an admirer of King Carol of Romania that she threw down a bunch of flowers from her balcony on the royal cortege passing by. It was a time of anarchist terror and the incident caused her family some trouble. In 1946 she married the aristocrat Constantin Cantacuzino, a Romanian aviator and WWII fighter ace. They had met when she was a passenger on a commercial air flight at which he was the pilot. One of the engines had caught fire and Cantacuzino was forced to do an emergency landing. At the time, Gray had just started a career as a theatre actress. In 1947, the couple left Romania for Paris to escape the Communist regime after World War II. Her film debut was in the French-Austrian coproduction L'Inconnu d'un soir/Strangers on a night (1948, Hervé Bromberger) with Claude Dauphin. She played the leading role as a young waitress who yearns to be a star. Nadia enjoyed with her husband a cosmopolitan jet-set life and meanwhile she appeared on stage and in films. Early film roles that led to European stardom included her countess in Monseigneur/Monsignor (1949, Roger Richebe) opposite Bernard Blier, a woman in love with a master-safecracker (Guy Rolfe) in The Spider and the Fly (1949, Robert Hamer), and an opera diva in the Technicolor biopic Puccini (1953, Carmine Gallone) featuring Gabriele Ferzetti as the composer. Her English language films included the action-adventure Valley of Eagles (1951, Terence Young), the crime drama Night Without Stars (1951, Anthony Pelissier) opposite David Farrar, and the comedy The Captain's Table (1959, Jack Lee). Gray and her husband had eventually settled in Spain, but in 1958 Cantacuzino died. 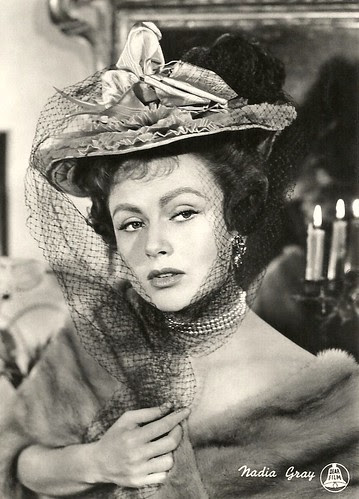 Bored and Decadent Socialite
Perhaps Nadia Gray’s best-known role was as the bored and decadent socialite Nadia in La Dolce Vita (1960, Federico Fellini) starring Marcello Mastroianni. In fact her part is only a cameo: toward the end of Fellini's masterpiece Nadia celebrates her divorce by performing a sensual mink-coated striptease during a wild party at her home. Gray specialized in aristocratic, jet-set roles. Among her scattered appearances in English-speaking productions were the comedy Mr. Topaze (1961, Peter Sellers) starring Peter Sellers, the Hammer horror thriller Maniac (1963, Michael Carreras) co-starring Kerwin Mathews, the thriller The Naked Runner (1967, Sidney J. Furie) starring Frank Sinatra, and a supporting role in the classic romance Two for the Road (1967, Stanley Donen) with Albert Finney and Audrey Hepburn. On TV, Gray played a.o. Number 8 in The Chimes of Big Ben (1967), an episode of the cult series The Prisoner (1967-1968) starring Patrick McGoohan. She had acquired the French nationality in 1964, but in 1967 she married Manhattan attorney Herbert Silverman, and they settled in the USA. She retired from films completely in 1976 and began headlining as a nightclub singer. Nadia Gray died of a stroke in 1994 in New York City. She was 70 and was survived by her second husband and their two stepchildren. 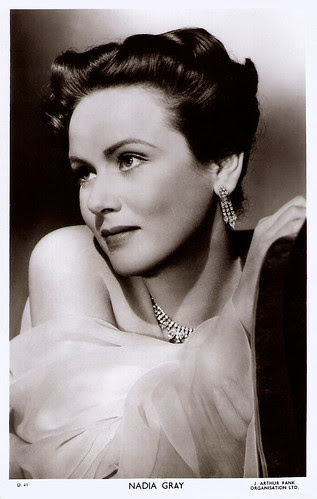 I remember her face from alot of movies and TV. Nice to know her background