Character actor Raymond Aimos (1891 – 1944) or simply Aimos was one of the familiar faces of the French cinema of the 1930’s and early 1940’s. During this golden age of Poetic realism, he was the quintessential 'titi parisien' (Parisian kid) in at least 105 films. His film characters generally corresponded with himself: humble, poor, colourful, cheeky but with a heart of gold.

Urban Legends
Raymond Aimos was born as Raymond Arthur Coudurier in La Fère in the North of France in 1891 (1889 (sic) according to IMDb and other sources). He was the son of a watchmaker-jeweler and was expected to work in the family business but young Raymond was uncontrollably attracted to show business. He managed to become an opera singer under the stage name Aimos. According to urban legends, retold by different sources, he made his first film appearance as a kid either in the Lumière brothers’ L’arroseur arose/The Sprinkler Sprinkled (1895, Louis Lumière) or in a film by another legendary film pioneer, Georges Méliès. (In the first film, the naughty boy is identified as Benoît Duval). However, officially Aimos made his cinema debut in the short silent western Pendaison à Jefferson City/Hanging at Jefferson City (1910, Jean Durand) with Joë Hamman and Gaston Modot. He appeared in more early silent shorts, like the comedies Onésime et le nourrisson de la nourrice indigne/Onesimus and the infant unworthy of the nurse (1912, Jean Durand), Onésime a un duel à l'américaine/Onesime has an American-style duel (1912, Jean Durand) and Onésime horloger/Onesime, Clockmaker (1912, Jean Durand), all starring Ernest Bourbon aka Onésime. A decade later, Aimos appeared in the Three Musketeers-sequel Vingt Ans après/Five Years Later (1922, Henri Diamant-Berger), based on the novel by Alexandre Dumas père. These film parts had all been modest, but Aimos’ lucky strike soon would come: sound film. 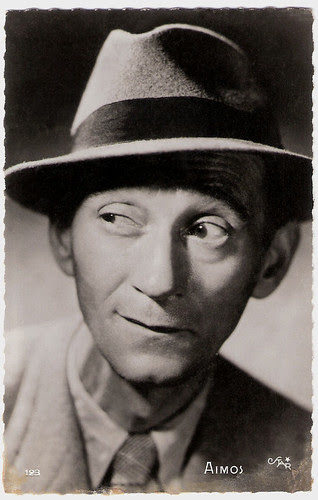 Gift of Gab
Aimos' physical appearance, his popular roots and mostly his gift of gab were in perfect harmony with the sound cinema of the 1930’s. He was wonderful as a humble man of the people in two masterpieces by René Clair, Sous les toits de Paris/Under the Roofs of Paris (1930) starring Albert Préjean, and Quatorze juillet/July 14 (1933) with Annabella. It lead to more work for important directors. He appeared for Raymond Bernard as a soldier in the war drama Les croix de bois/Wooden Crosses (1932) with Pierre Blanchar, and a clochard in Amants et voleurs/Lovers and Thieves (1935) with Arletty, for Sacha Guitry as another clochard in Ils étaient neuf célibataires/Nine Bachelors (1939), for Marcel Carné as Quart-Vittel, the wreck in Quai des brumes/Port of Shadows (1938), and for Jean Grémillon in Lumière d'été/Summer Light (1943) starring Madeleine Renaud. His most memorable roles were in the films by Julien Duvivier, such as Mulot, the legionary friend of Jean Gabin in La Bandera/Escape from Yesterday (1935), and Tintin, one of the five friends who build a riverside café after winning the jackpot in the lottery in La Belle Équipe/They Were Five (1936) with Jean Gabin and Charles Vanel. He also appeared in Duvivier’s Paquebot Tenacity/S.S. Tenacity (1934) and L’homme du jour/The Man of the Hour (1937). At IMDb, Guy Bellinger writes: “But even when he worked for less distinctive directors his presence was an asset for the film.” Some of these films now belong to the highlights of the Poetic realism, a French genre of the 1930’s of lyrical, stylized and studio-bound films which offered a fatalistic view of life with their characters living on the margins of society, either as unemployed members of the working class or as criminals. Raymond Aimos was a courageous man in life. In August 1944, he decided to take part in the uprising against the Nazis which would lead to the Liberation of Paris. He was unfortunately hit by a stray bullet in the 10th Arrondissement. The exact circumstances of his death remain unclear and undetermined. He was only 53. Raymond Aimos never married and had no children. But he left an impressive film legacy, according to some sources he even appeared in nearly 450 films (however, Yvan Foucart in his Dictionnaire des comédiens français disparus and IMDb 'only' mention 100 - 150 films)!


French trailer for Quai des brumes/Port of Shadows (1938). Source: Made in French (YouTube).