Actress Tilda Thamar (1917 – 1989) became known as the ‘Blonde Bombshell from Argentina’ in the French cinema of the 1950’s. She continued to make films in France till her death in a car accident. 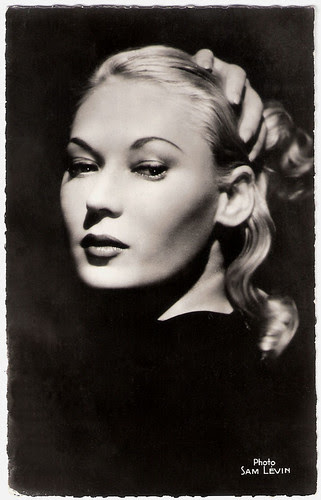 Sculptural Silhouette
Tilda Thamar was born Matilda Sofia Abrecht de Vidal Quadras in Urdinarrain, Argentina in 1917 (some sources say 1921). She was the daughter of the German immigrants Martha Nichoerster and Carlos Abrecht. Her father worked as a book seller and teacher in German language. In 1925 he opened a book, record and jewellery shop annex photo studio. Tilda started her career as a teenager with bit roles in Argentine films, such as Don Quijote del altillo/Don Quixote in the attic (1936, Manuel Romero). She took her stage name by transposing the syllables of the name of her mother Martha (tha-mar). In Segundos afuera!/Seconds out! (1937, Israel Chas de Cruz, Alberto Etchebehere) starred the boxer Pedrito Quartucci. Eva Duarte (the later Evita Perón) played a small part in it. The following years Thamar appeared as an extra or bit player in several Argentine films, including El Loco Serenata/The crazy musician (1939, Luis Saslavsky) with Pepe Arias, Ceniza al viento/Ashes to the wind (1941, Luis Saslavsky) with Tita Merello, and El espejo/The mirror (1943, Francisco Mugica) starring Mirtha Legrand. Her roles got bigger in such popular films as El muerto falta a la cita/The corpse breaks a date (1944, Pierre Chenal), the comedy La casta Susana/Chaste Susan (1944, Benito Perojo) based on a German operetta with music by Jean Gilbert, and La señora de Pérez se divorcia/Mrs. Perez and her divorce (1945, Carlos Hugo Christensen) featuring Mirtha Legrand. Tilda became increasingly popular thanks to her talent but also to her sculptural silhouette and blond hair. One of her most successful films was Adán y la serpiente/Adam and the Serpent (1946, Carlos Hugo Christensen), which was the first Argentine film forbidden for minors under 18. Thamar wore a bikini in the film and she was the first Argentine woman who dared to do so. According to Spanish Wikipedia, she appeared in these Argentine films of the 1940’s “not as a femme fatale but as a rogue vampire, who got into the lives of men, gave them a moment of solace and then draw the attention of their unsuspecting wives.” In 1947, Thamar was offered an attractive contract by the Lumiton studio to make film seven films as their main star. But after only one film, Novio, marido y amante/Boyfriend, husband and love (1948, Mario C. Lugones), her Argentine career stopped. The Peronist censors had cut several scenes from her film. She also had posed for the noted German-Argentine photographer Annemarie Heinrich, who was charged with exhibiting obscene works. Still in 1991, more than 40 years later, the Buenos Aires municipality declared the closing of an art gallery and police custody of his window, which displayed the same nude photo within the framework of the exhibition El espectáculo en la Argentina (1930-1970). 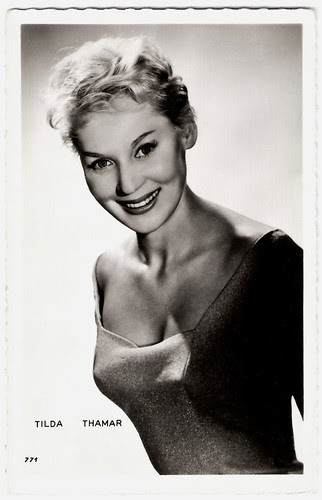 Exile in Paris
Tilda Thamar is quoted at Spanish Wikipedia: "Eva Perón had ruled that there was no further filming in Argentina." Thamar left the country and went into exile in Paris. There she was welcomed by the French film industry as the ‘Blonde Bombshell from Argentina’. She appeared in such French productions as the film noir L’ange rouge/The red angel (1948, Jacques Daniel-Norman) with Paul Meurisse, the crime film Ronde de nuit/Night Watch (1949, François Campaux), the musical Amour et compagnie/Love and Company (1949, Gilles Grangier) starring Georges Guétary, and Sérénade au bourreau/Serenade for the executioner (1950, Jean Stelli). She also married a certain Count Toptani, but only briefly. Her French films were mostly mediocre gangster films, including Porte d’Orient/Oriental Port (1950, Jacques Daroy), La femme à l’orchidée/The Woman with the Orchid (1951, Raymond Leboursier) with Georges Rollin, Massacre en dentelles/Massacre in Lace (1951, André Hunebelle) with Raymond Rouleau, and Monsieur Scrupule, gangster/Mr. Scrupule, Gangster (1953, Jacques Daroy). In Spain she made El cerco del Diablo/The siege of the devil (1952, Antonio del Amo, Edgar Neville, José Antonio Nieves Conde, Enrique Gómez, Arturo Ruiz Castillo) with Fernando Rey, and Sor Angélica/Sister Angelica (1954, Joaquín Luis Romero Marchent). After the fall of president Péron in 1955, she returned to Argentina to film La mujer desnuda/The Naked Woman (1955, Ernesto Arancibia) and other films. During the 1950’s, she also continued to make films in France and Spain, and alternated this with the direction of short films and a feature film in 16 mm. Thamar returned regularly to Argentina. She showed a passion for drawing and painting, and created colourful art works in the Argentine landscapes of her youth. Thamar studied at the Escuela Nacional de Bellas Artes. In 1956 she married the painter Alejo Vidal Quadras. From the 1960’s on, she only appeared incidentally in films. In 1989, Tilda Thamar died in a car accident in Clermont-en-Argonne in Northern France. She was 71. Her last film was the horror thriller Los depredadores de la noche/Faceless (1988, Jesús Franco) starring Helmut Berger. 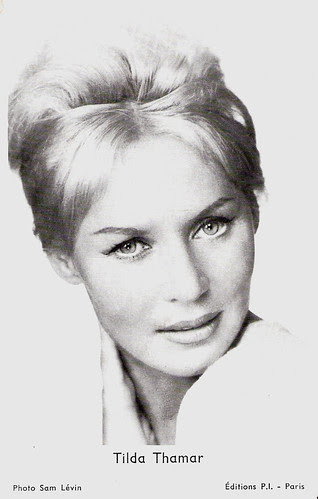