Russian actor Ivan Mozzhukhin (1889 - 1939) was a legendary star of the European silent film. He escaped from execution by the Soviet Red Army and made a stellar career in Europe, but he suffered in Hollywood. 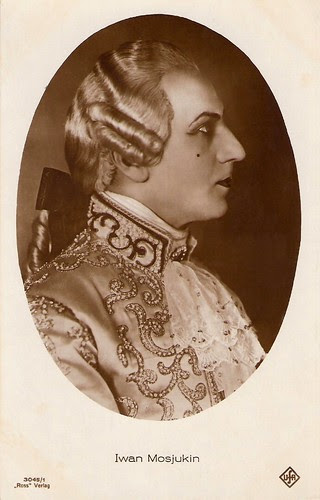 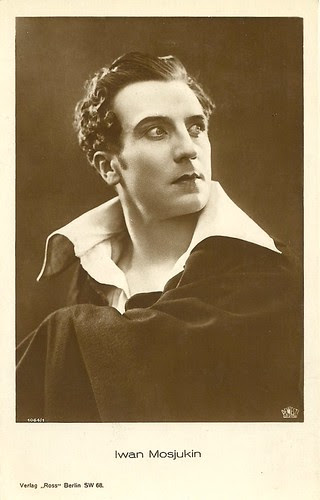 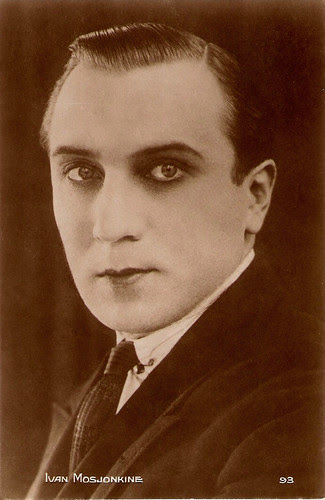 French postcard by Cinémagazine-Edition, no. 93. 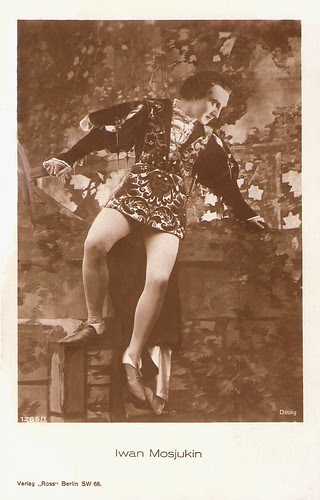 Tolstoy and Pushkin
Ivan Ilyitch Mozzhukhin (Иван Ильич Мозжухин in Russian, or Iwan Mosjukin, as he was called in Germany, or Ivan Mosjoukine in France) was born in the village of Kondol, Saratov province, Russian Empire (now Penza province, Russia) in 1889. His father was general manager of the large estate of Prince Obolensky. Mozzhukhin attended a Gymnasium in Penza, then studied law at the Moscow State University for two years. There he was active in amateur stage productions. He joined a touring troupe, then returned to Moscow and was member of Vvedensky Narodny Dom Theatre. He made his film debut in 1908. From 1911 to 1914 he worked in the silent films of producer Aleksandr Khanzhonkov. Mozzhukhin shot to fame after his leading role as violinist Trukhachevsky in The Kreutzer Sonata/Kreitzerova sonata (1911, Pyotr Chardynin), based on the eponymous story by Leo Tolstoy. He starred as Admiral Kornilov in Oborona Sevastopolya/Defence of Sevastopol (1911, Vasili Goncharov, Aleksandr Khanzhonkov). This was the first film ever that was shot by two cameras. Next he appeared in the delightful comedy Domik v Kolomne/The Kolomna House (1913, Pyotr Chardynin) after a poem by Alexander Pushkin. He would star in about thirty more silent Russian films made by Chardynin, Khanzhyonkov and Yevgeni Bauer. His film partners were Diaghilev's ballerina Vera Karalli and his wife Natalya Lyssenko (billed in France as Nathalie Lissenko). 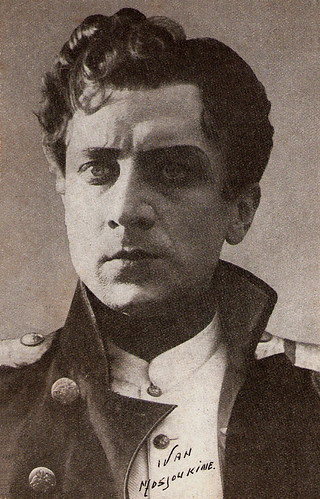 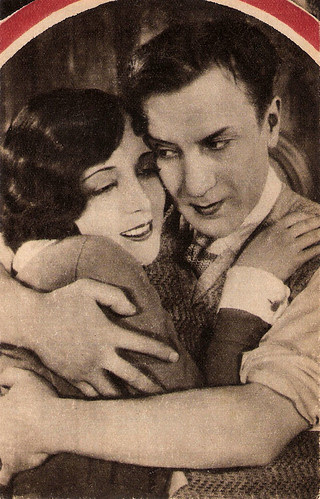 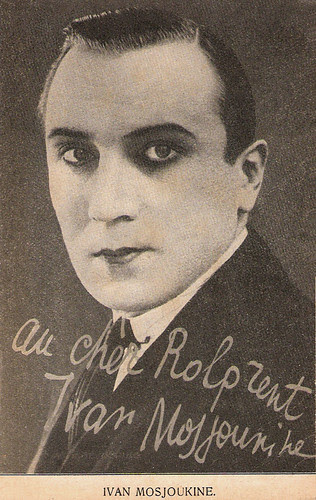 Numerous Love Affairs
By the mid-1910's Ivan Mozzhukhin had become the indisputable leading star of the Russian cinema. His facial expressions were studied by many actors and directors as exemplary acting masks. From 1915 till 1919 he worked in about 40 films by directors Yakov Protazanov and Viktor Tourjansky under the legendary Russian producer Joseph N. Ermolieff. His best known films of this period were Pikovaya dama/The Queen of Spades (1916, Yakov Protazanov) after Pushkin, Nikolay Stavrogin (1915, Yakov Protazanov) after Fyodor Dostoyevsky, and Otets Sergiy/Father Sergius (1917, Yakov Protazanov, Alexandre Volkoff). The reviewer at IMDb writes that the film "has many uncommonly modern characteristics. Besides the daring subject it has a rather strongly developed lead character, good storytelling and cinematography and a script which deals with human emotions without being exploitative or sentimental. Altogether it has a very modern touch to it for a movie made in 1917, (...) a prime example of the art film movement of pre-soviet Russia." Mozzhukhin's incredible popularity brought him significant wealth, that came with attendant pressure; he also became famous for his numerous love affairs with his admirers. 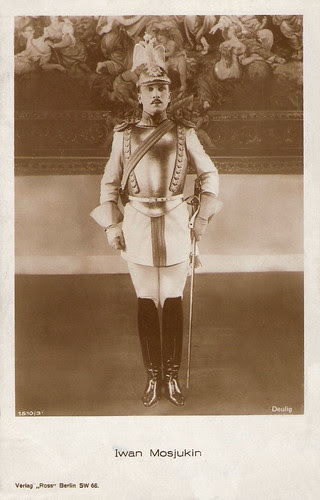 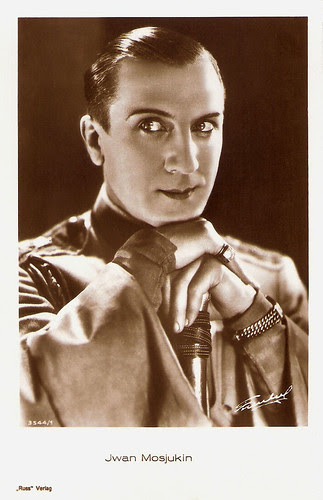 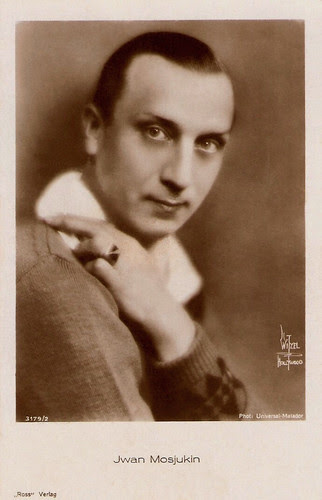 Handsome, Tall, and Possessing
In 1918, the Russian Communist Revolution already caused irreversible destruction of cultural and economic life, and Ivan Mozzhukhin moved under protection of the White Russians in Yalta, Crimea. Soviet director Lev Kuleshov assembled his revolutionary illustration of the application of the principles of film editing out of footage from one of Mozzhukhin's Tsarist-era films which had been left behind. Mozzhukhin's face in recurring representation of illusory reactions demonstrated in Lev Kuleshov's psychological montage experiment 'the Kuleshov Effect'. Meanwhile Mozzhukhin worked for the Ermolieff film company in Crimea. After the Revolution, in early 1920, he left Russia together with his wife Nathalie Lissenko and his partners from Ermolieff. They emigrated together to France, and started in Paris a Russian-French film company. Paris became the new capital for most of the exiled former aristocrats and other refugees escaping the civil war and Bolshevik terror gripping Russia. In France, Ivan Mozzhukhin changed his name into Ivan Mosjoukine. Handsome, tall, and possessing a powerful screen presence, he won a considerable following as a mysterious and exotic romantic figure. He starred in hits like the innovative murder mystery La maison du mystère/The Mysterious House (1923, Alexandre Volkoff), Kean/Edmund Kean: Prince Among Lovers (1924, Alexandre Volkoff), the lavish adventure spectacle Michel Strogoff/Michael Strogoff (1926, Victor Tourjansky) based on the Jules Verne novel, and the humourous and visually splendid Casanova/The Loves of Casanova (1927, Alexandre Volkoff). His face with the trademark hypnotic stare appeared on covers of film magazines all over Europe. He wrote the screenplays for most of his starring vehicles and directed two of them, L'Enfant du carnaval/Child of the Carnival (1921) and Le Brasier ardent/The Blazing Inferno (1923). 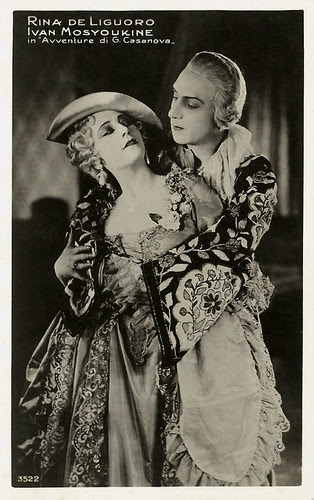 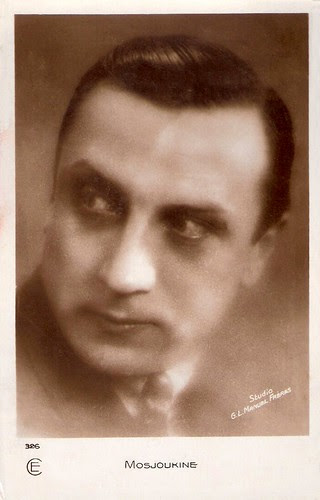 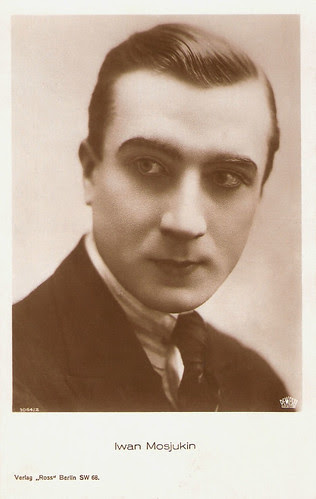 Hollywood Conspiracy
After the death of Rudolph Valentino, Ivan Mozzhukhin got a lucrative contract with Universal Pictures. He was cast as a male lead in Surrender (1927, Edward Sloman). However, his stint in Hollywood, was not a success, due to numerous pressures from producers who insisted on changing his name to John Moskin and on plastic surgery to shorten his nose. This operation caused a permanent change of his natural facial expression. In addition to the emotional pains of plastic surgery, and changes to his facial features, he suffered from the lack of chemistry with his non-responsive co-star, Mary Philbin. At that time Hollywood was already shifting to sound film, and Mozzhukhin, who did not speak English, was not offered any more roles. He returned to Europe. Artist and longtime friend Aleksandr Vertinsky commented later on Mozzhukhin's suffering in Hollywood, that it was "a conspiracy to destroy the strong competitor". 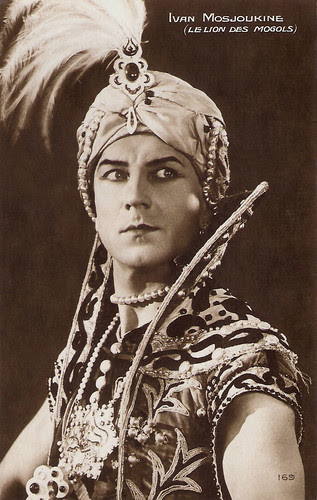 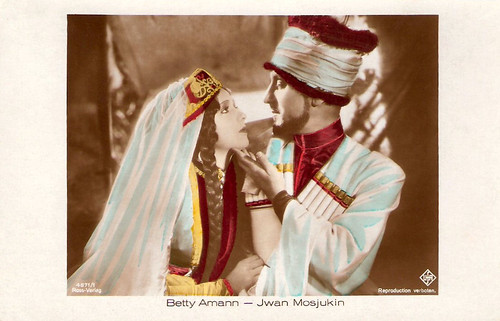 White Devil
The still for the postcard above of Betty Amann and 'Ivan Mosjukin' is from the Ufa production Der Weisse Teufel/The White Devil (1930), based on a novel by Leo Tolstoy. With great style and visual flare Alexandre Volkoff directed this film that represented the European silent tradition at it's finest and most dynamic. Mozzhukhin stars as a fiery Caucasian captain, Hadscht Murat. Der Weisse Teufel was his first film to include a synchronised soundtrack: existing of an effective score by Michael Lewin and others, some sequences of singing and whistling, and a range of sound effects, but no dialogue. The later director Michael Powell was apparently the stills photographer on the film and therefore probably was the maker of the photo used for this postcard. 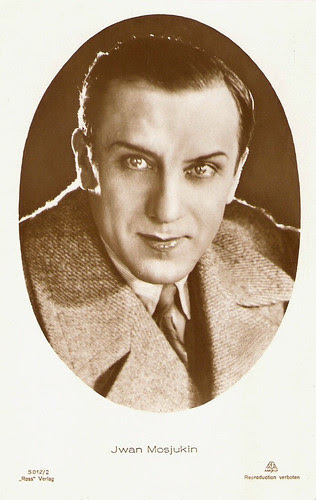 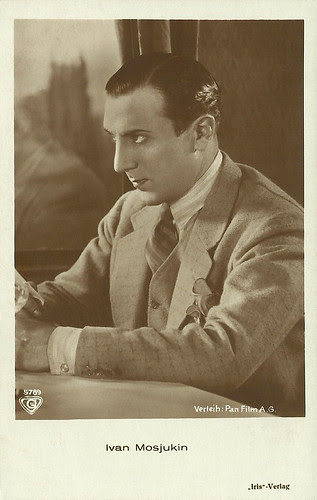 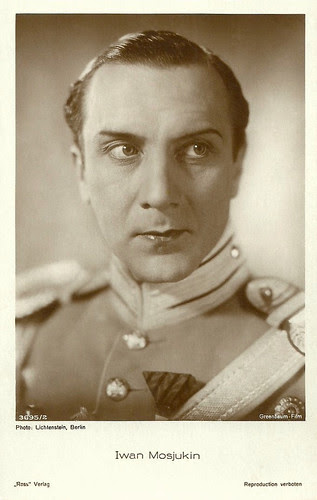 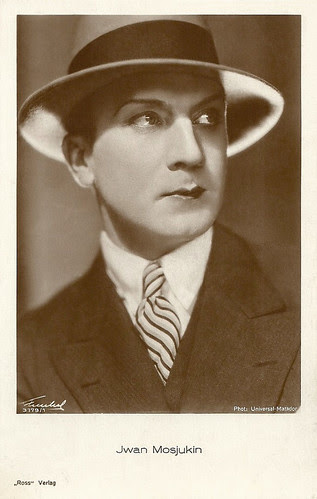 Tuberculosis
Ivan Mozzhukhin continued to star in sound films like Sergeant X (1932, Vladimir Strizhevsky), albeit with a smaller success. He also wrote screenplays for several of his films. His final film was Nitchevo (1936, Jacques de Baroncelli). By then his filmography included over 100 films made in Russia, France, Italy, United States, Germany and Austria. He planned to direct a film in France, but he contracted a severe form of tuberculosis. Ivan Mozzhukhin died in a Neuilly-sur-Seine clinic in 1939. He was laid to rest in the Russian Cemetery at Sainte-Geneviève-des-Bois in Paris. His home in Kondol, Russia is now restored as a public Memorial Museum of Ivan Mozzhukhin. Since the 1990's, the museum is having an annual Mozzhukhin film show also known as Mozzhukhin's Festivities.


Scene from Der Weisse Teufel/The White Devil (1930), including a vintage soundtrack made the same year to fit the film with sound. Source: GoldenSilents (YouTube).