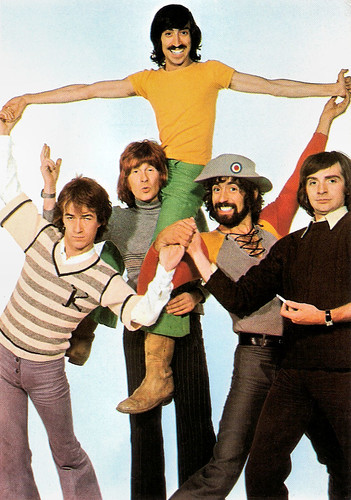 Just Fluff, Cute and Sugar Coated
In 1965, Les Charlots started as five musicians, who accompanied French singer Antoine under the name of Les Problèmes (The Problems). In 1966 they formed their own band, Les Charlots. The name means ‘the clowns’ rather than being a direct reference to Charlie Chaplin, who was generally called 'Charlot' in France. At the time, the group members were singer Gérard Rinaldi, base player Jean Sarrus, solo guitar player Gérard Filipelli, guitar player Luis Rego and drummer Donald Rieubon. Their manager was Christian Fechner. Because of his miltary service Rieubon had to leave the group. He was replaced by Jean-Guy Fechner the brother of the manager. They did the for program for French stars like Françoise Hardy (1965), Johnny Hallyday (1967) and Claude François (1968), but also at a concert of The Rolling Stones. The five boys became rather popular in France when they started to specialize in humoristic songs like L'Apérobic, Merci Patron or Le Chou Farci. Just like The Beatles before them, les Charlots started to make film comedies. Their film career was launched with the slapstick comedy Le Grand Java/The Great Java (1970, Philippe Clair). It was a success. Their next film, Les Bidasses en folie/Rookies Run Amok (1971) was made by Claude Zidi, whose directing debut it was. Les Bidasses en folie was with nearly 7.5 million visitors the most successful film released in France in 1971. Moviefreakgirl reviews at IMDb: “The actors have some good body language, and the gags are funny, but it lacks any link of decent storyline or characters. It's just fluff, cute and sugar coated, with a positive feeling. It can leave you with a smile on your face, as some of the moments are spot on.” After the comedy was released, Luis Rego officially stopped with Les Charlots. Nevertheless, he returned in several subsequent films of Les Charlots. 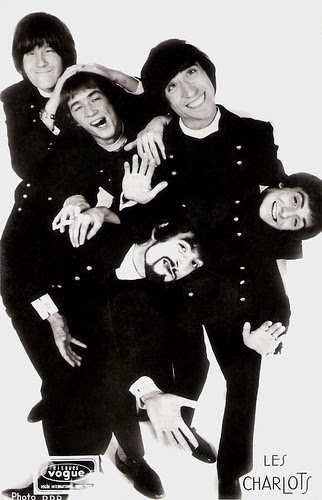 A Lack of Artistic Choices
The humor of Les Charlots (now only four) also exported very well abroad, especially to South-East Asia and India. Zidi would also direct their film hits Les Fous du stade/Stadium Nuts (1972, Claude Zidi), Le Grand Bazar/The Big Store (1973, Claude Zidi) with Michel Galabru, and Les Bidasses s'en vont en guerre/Sadsacks Go to War (1974, Claude Zidi) with Paolo Stoppa. Around 1975 Jean-Guy Fechner left the group after a fight with his brother and the other Charlots. During the rest of the 1970’s, Les Charlots (now just three) always had a high ranking at the French Box Office Top 10 with such films as Bons baisers de Hong Kong/From Hong Kong with Love (1975, Yvan Chiffre) with veteran Hollywood star Mickey Rooney and Et vive la liberté!/Long Live Liberty! (1978, Serge Korber). Around 1980 a new manager arrived, Bezu. A lack of artistic choices caused that the quality of the films of Les Charlots diminished. In the mid 1980’s they became too old to play the clowns and audiences became too bored. Gérard Rinaldi stopped and became an actor in films like the thriller Descente aux enfers/Descent into Hell (1986, Francis Girod) with Claude Brasseur and the TV series Marc et Sophie/Marc and Sophie (1987-1991). Rinaldi was replaced by Richard Bonnot. After the film Les Retour des Charlots/The Charlots Return (1992, Jean Sarrus) was released, Richard Bonnot, Gerard Filipelli and Jean Sarrus also stopped. Jean Sarrus became a TV host. Luis Rego worked as an actor, notably in the film Le coeur fantôme/The Phantom Heart (1996, Philippe Garrel). The third member, Gérard Filipelli, disappeared from the public eye. Former member Jean-Guy Fechner worked again with his brother, film producer Christian Fechner. This was provisionally the end of Les Charlots until Gerard Rinaldi and Jean Sarrus decided to restart the group in 2008 for the tour Âge tendre et Têtes de bois (Tender age and Wooden Heads), a new album and a TV show. In 2012, Gérard Rinaldi died of cancer at the age of 69.