Since 1972, French actress Emmanuelle Béart (1963) has appeared in over 50 film and television productions. Initially cast for her extraordinary beauty, Béart has emerged over the years as one of France's best actresses. The sapphire-eyed Béart has been nominated eight times for a César Award and she won for Best Supporting Actress in the film Manon des Sources (1986).


Emmanuelle Béart was born Emmanuelle Béhart-Hasson in St. Tropez (some sources say Gassin), on the French Riviera, in 1963. She was the daughter of Geneviève Galéa, a former model, and Guy Béart, a singer and poet. Following her parents' divorce, Emmanuelle was raised by her mother in Gassin, a remote mountain village in Provence.

In her late teens she spent her summer vacation with the English speaking family of a close friend of her father in Montreal. At the end of the summer the family invited her to stay with them and complete her baccalauréat at Collège international Marie de France. In Montreal, she met director Robert Altman, who encouraged her to become an actress. She took a screen test for him, but nothing came of it.

For both her roles in Un amour interdit/A Strange Passion (Jean-Pierre Dougnac, 1985) and the comedy L'amour en douce/Love on the Quiet (Édouard Molinaro, 1986), she was nominated for a César as Most Promising Actress.

In 1986 she achieved fame with as a beautiful blonde shepherd and also vengeful daughter of the late Jean de Florette in Manon des Sources/Manon of the Spring (Claude Berri, 1986) opposite Yves Montand. Manon des Sources is the critically acclaimed and commercially successful sequel to Jean de Florette, adapted from the 1966 two-volume novel by Marcel Pagnol, who wrote it based on his own earlier film of the same title. For her performance, she won the 1987 César Award for Best Supporting Actress.

Less successful was her Hollywood stint as an angel in the fantasy comedy Date with an Angel (Tom McLoughlin, 1987) starring Phoebe Cates and Michael E. Knight. 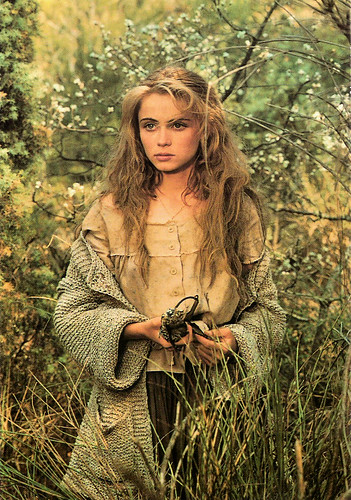 
In the mid-1980s, Emmanuelle Béart began a relationship with Daniel Auteuil, her co-star in L'amour en douce/Love on the Quiet, Manon des Sources/Manon of the Spring, Un cœur en hiver/A Heart in Winter and Une femme française/A French Woman. They married in 1993 but divorced in 1998.

She did another role in a Hollywood production, Mission: Impossible (Brian De Palma, 1996), produced by and starring Tom Cruise. The film was the third-highest-grossing of the year and received positive reviews from film critics, but her window-dressing role did not lead to more American films.

In the 5 May 2003 issue of the French edition of Elle magazine, Béart, aged 39, appeared nude with a younger man. The entire print-run of 550,000 copies sold out in just three days, making it the biggest-selling issue in the fashion glossy's long history.

In 2007, she participated in Les témoins/The Witnesses (André Téchiné, 2007) about the first outbreak of the AIDS epidemic.

In addition to her screen work, Béart is also known for her social activism. She is an ambassador for UNICEF, and is known for her opposition to France's anti-immigration legislation. In 1996, she made headlines when, defending the rights of the ‘sans-papiers’ (black illegal immigrants), she was forcibly removed from a siege in a Paris church.

She married twice and has two children. Her first husband was frequent co-star Daniel Auteuil (1993-1995), with whom she has a daughter, Nelly Auteuil (1993). Later, Béart was romantically linked to music producer David Moreau, with whom she has a son Johan Moreau (1996), and to film producer Vincent Meyer for two years until his suicide in May 2003. In 2008, she married actor Michaël Cohen.