George Formby (1904–1961) was Britain's most popular film comedian between 1934 and 1945, and one of the highest-paid stars. He appeared in 21 hit films, cut over 230 records, and entertained an estimated three million Allied Servicemen during World War II. His trademark was the banjo ukulele - along with his buck-toothed grin. 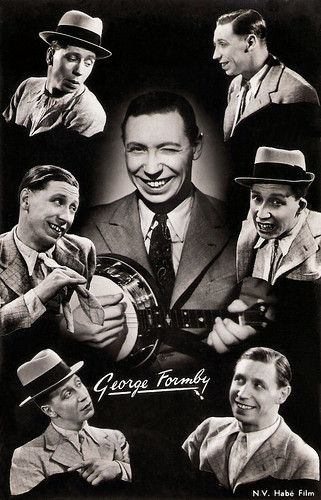 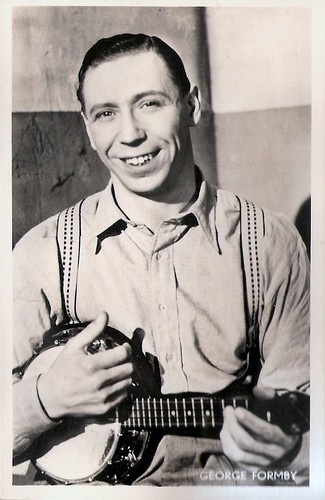 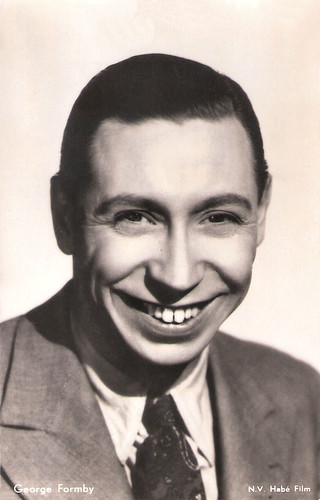 George Formby was born in Wigan, Lancashire, in 1905, as George Hoy Booth, the eldest of seven children. He was born blind due to an obstructive caul; his sight was restored during a violent coughing fit or sneeze when he was a few months old.

His father, George Formby Senior (real name James Booth), was a famous stage actor and comedian. He never wanted any of his family to enter show business and so George Jr., was apprenticed as a jockey when he was seven and rode his first professional race at ten.

On the death of his father in 1921, Formby jr. abandoned his career as a jockey and started his own music hall career using his father's material. In 1924 he married dancer Beryl Ingham, who managed his career until her death in 1960.

He allegedly took up the ukulele, for which he was later famous, as a hobby; he first played it on stage for a bet. In film and on stage, he generally adopted the character of the Cheekie-Chappy, an honest, good-hearted but accident-prone innocent who used the phrases: "It's turned out nice again!" as an opening line; "Ooh, mother!" when escaping from trouble; and a timid "Never touched me!" after losing a fistfight.

What made him stand out, however, was his unique and often mimicked musical style. He sang comic songs, full of double entendre, to his own accompaniment on the ukelele-banjo. He played it in a highly syncopated style, referred to as the 'Formby style'.

Some of his songs were considered too rude for broadcasting. His 1937 song, With my little stick of Blackpool Rock was banned by the BBC because of the lyrics, but Formby's cheerful, innocent demeanor and nasal, high-pitched Lancashire accent neutralized the shock value of the lyrics. 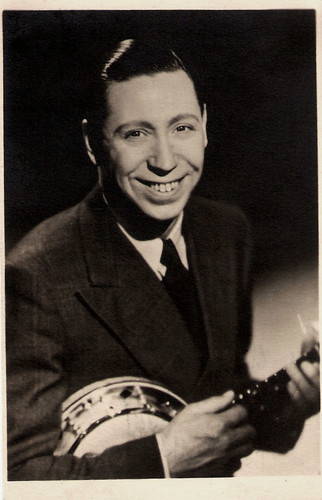 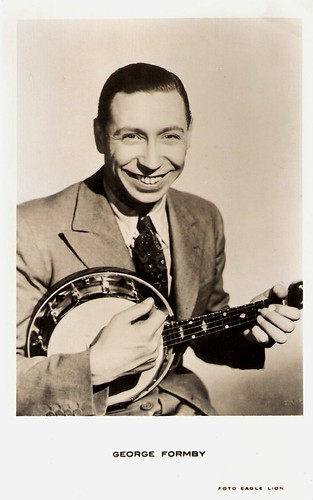 The film was successful and he signed a contract to make a further eleven with Associated Talking Pictures, which earned him a then-astronomical income of £100,000 per year.

In his films he played essentially gormless incompetents, aspiring to various kinds of professional success (as cyclist or jockey) and even more improbably to a middle-class girlfriend, usually in the clutches of some caddish type with a moustache.

Between 1934 and 1945 Formby was the top comedian in British cinema, and at the height of his film popularity, Let George Do It (Marcel Varnel, 1940) with Phyllis Calvert, was exported to America. This espionage comedy is still regarded as probably his best.

George is a member of a concert party, who takes the wrong ship by mistake during a blackout, and finds himself in Norway (mistaking Bergen for Blackpool) as a secret agent. A dream sequence in which he punches Adolph Hitler on the nose and addresses him as a 'windbag' is one of the most enduring moments in film comedy.

In the post-war years, the Formbys toured Australia and New Zealand, Scandinavia and Canada, and in 1951 George took the West End by storm in the new musical Zip Goes A Million.

A weak heart led to his official retirement in 1952 although he had since occasionally appeared on the stage and in pantomimes.

His final heart attack occurred at the home of his fiancée, Patricia Howson, 36. The announcement of their engagement was a surprise to many, coming as it did just two months after the death of Beryl. An estimated 100,000 mourners lined the route as George Formby's coffin was driven to the cemetery.