French actor Michel Piccoli (1925) has appeared in many different roles, from seducer to cop to gangster to Pope in more than 200 films and TV films. Among the directors he worked with are Jean Renoir, Jean-Pierre Melville, Jean-Luc Godard, Agnès Varda, Luis Buñuel, and Alfred Hitchcock. 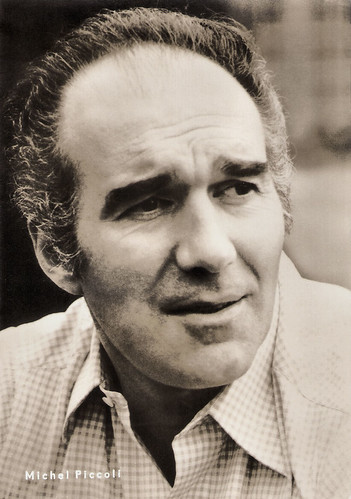 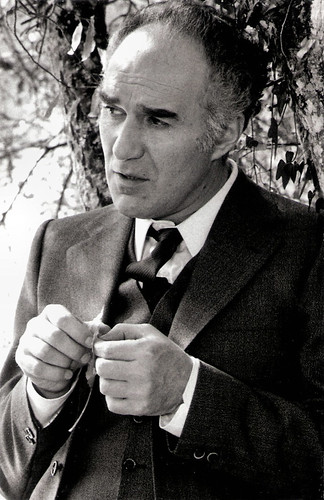 Michel Piccoli was born Jacques Daniel Michel Piccoli in Paris in 1925 to a musical family. His French mother Marcelle Piccoli was a pianist and his Italian father Henri Piccoli was a violinist.
At boarding school, the introverted teenager Michel developed a profound love for the stage. He later studied drama under Andrée Bauer-Thérond and then trained as an actor at the René Simon drama school in Paris.
In 1945, he began his stage career with the Renaud-Barrault theatre company at the Théâtre de Babylone in Paris. He made his film debut in Sortilèges (Christian-Jaque, 1945), but his first proper film role was in Le Point du jour/The Mark of the Day (Louis Daquin, 1949).
Piccoli subsequently lent his talents to Jean Renoir in French Cancan (1954) starring Jean Gabin, and René Clair in Les Grandes Manoeuvres/The great manoeuvres (1955) with Gérard Philipe.
It took six more years to become ‘box office’ as a film actor with the gangster film Le Doulos/The Finger Man (Jean-Pierre Melville, 1961), starring Jean-Paul Belmondo.
He then had his international breakthrough with his leading role opposite Brigitte Bardot in Jean-Luc Godard's Le Mépris/Contempt (1963). Hal Erickson at AllMovie: “Like Hollywood's Cary Grant, Jimmy Stewart, and Gary Cooper, Piccoli was possessed of that rare gift of being able to adapt himself to virtually any kind of material without altering his essential screen persona. And like those aforementioned actors, Piccoli's talents suited the prerequisites of a wide variety of directors.”
He worked with some of the best international film auteurs: Agnès Varda at Les Créatures/The Creatures (1966) opposite Catherine Deneuve, Alain Resnais at La Guerre est finie/The War Is Over (1966), Jacques Demy at Les Demoiselles de Rochefort/The Young Girls of Rochefort (1967), and Alfred Hitchcock (Topaz, 1969). 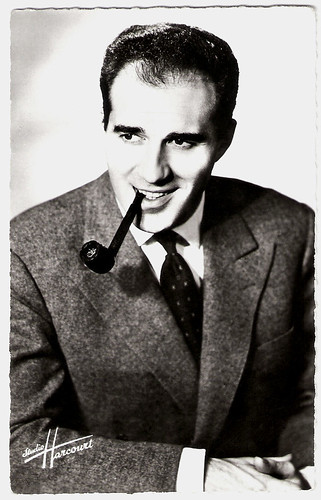 A Symbol of Bourgeois Respectability

Michel Piccoli starred in four of the best-known films of French director Claude Sautet, starting with Choses de la vie/The Little Things in Life (1969) with Romy Schneider. Invariably he was cast as a symbol of bourgeois respectability whose quest for personal fulfilment appears destined to end in failure.
James Travers at French Films.info: “Sautet did more to humanise Piccoli than perhaps any other filmmaker, particularly when the actor was cast alongside Romy Schneider (in Les Choses de la vie and Max et les Ferrailleurs), the actress who became one of Piccoli's dearest friends.”
A darker, more disturbing Piccoli can be seen in the films he made for Luis Buñuel, in particular Le Journal d'une femme de chamber/The Diary of a Chambermaid (1964), Belle de jour/Beauty of the Day (1967) and Le Charme discret de la bourgeoisie/The Discreet Charm of the Bourgeoisie (1972).
Throughout the 1970s and 1980s, Piccoli was one of the most visible faces in the European cinema, with films like Les Noces rouges/Wedding in Blood (Claude Chabrol, 1973), Themroc (Claude Faraldo, 1973), La Grande bouffe/The Big Feast (Marco Ferreri, 1973), Atlantic City (Louis Malle, 1980), and Salto nel vuoto/A Leap in the Dark (Marco Bellocchio, 1980), for which he won the Best Actor Award at the 1980 Cannes Film Festival.
In 1982, he won the Silver Bear at the 32nd Berlin International Film Festival for his chilling role in Une étrange affaire/Strange Affair (Pierre Granmier-Deferre, 1981).
Both as an actor and as a producer Piccoli supported such young filmmakers as Bertrand Tavernier (Des enfants gates/Spoiled Children, 1977), Jacques Doillon (La Fille prodigue/The Prodigal Daughter, 1981) and Leos Carax (Mauvais sang/Bad Blood, 1986).
In 1976, Piccoli recorded his remarkable career on the page when he co-wrote a semi-autobiography, Dialogue Egoistes (Egoist Dialogues). He has been married three times, first to actress Éléonore Hirt (1954-?), then for eleven years to the singer Juliette Gréco (1966-1977) and finally, from 1980 on to writer and actress Ludivine Clerc. He has one daughter from his first marriage, Anne-Cordélia. 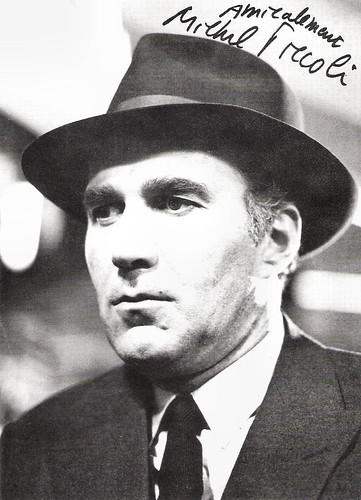 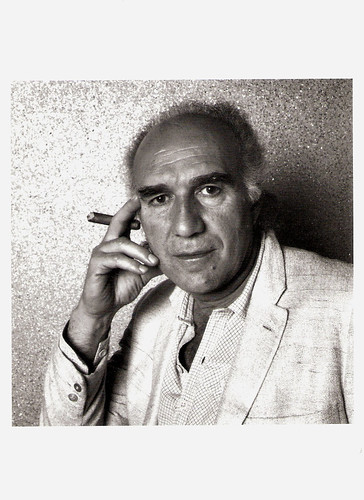 In the 1980s, Michel Piccoli resumed his stage career, starring in Peter Brook's acclaimed Paris productions of Anton Tchekhov's The Cherry Orchard (1981, 1983) and Patrice Chéreau's staging of Marivaux's La Fausse Suivante (1985).
He continued to star in films, such as in Milou en mai/Milou in May (Louis Malle, 1990) for which he was nominated for the César. In 1991, Piccoli again won international acclaim for his portrayal of an artist suffering from a creative block in La belle noiseuse (Jacques Rivette, 1991) with Emmanuelle Béart.
Piccoli turned his hand to film directing, starting with a segment for the Amnesty International film Contre l'oubli (1991). His first feature was Alors viola/So There (1997), followed by La Plage noire/The Black Beach (2001) with Dominique Blanc, and C'est pas tout à fait la vie dont j'avais rêvé (2005).
Not surprisingly, he was chosen to impersonate Mr. Cinema in Agnès Varda's Les cent et une nuits de Simon Cinéma/The One Hundred and One Nights of Simon Cinema (1995).
He subsequently continued to do steady work in pictures of varying quality, with highlights being the psychological thriller Généalogies d'une Crime (Raul Ruiz, 1997) with Piccoli as a doctor caught up in a murder mystery, and Je rentre à la maison/ I'm Going Home (Manoel de Oliveira, 2001) with Catherine Deneuve.
In 2001 he was the recipient of the Europe Theatre Prize. In 2002, he supported Lionel Jospin's presidential campaign. Piccoli is vocally opposed to the Front National.
In 2012, he won the David di Donatello (the Italian Oscar) for his role as the pope in the comedy-drama Habemus Papam/We Have a Pope (Nanni Moretti, 2012).
Since then he made again several films. James Travers at French Films.info: “There is something utterly seductive about Piccoli's screen portrayals, which comes from the actor's irresistible personal charm and his ability to project, very subtly, the inner neuroses, desires and venality of his characters. No wonder he is so well-loved by critics and audiences, and so eagerly sought after by filmmakers. Indefatigable, talented and generous, Piccoli deserves his reputation as one of the finest actors of his generation.”