Lucia Bosé (1931) is an Italian actress, famous for her films from the 1950s with a.o. Giuseppe De Santis and Michelangelo Antonioni. In the same years and after she also worked with other famous directors such as Juan Bardem, Luis Buñuel, the Taviani brothers, Liliane Cavani, Francesco Rosi and Ferzan Özpetek. 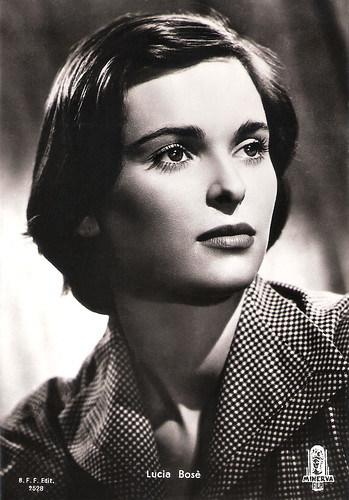 Lucia Bosè was born Lucia Borloni in Milan, Italy in 1931. She comes from a peasant and working-class family and began to work at the age of twelve years. She was first a messenger for a law firm, later a clerk in Milan's fine pastry shop Galli.

In 1947 she participated in the first Miss Italy pageant, where she was able to win against competitors like Gianna Maria Canale, Eleonora Rossi Drago and Gina Lollobrigida.

Had Giuseppe De Santis still preferred Silvana Mangano for Riso amaro/Bitter Rice (1949), he chose Bosè for his next film, Non c'è pace tra gli ulivi/No peace among the olive trees (Giuseppe De Santis, 1950), a typical Neorealist film about a poor shepherd (Raf Vallone) who tries steal back his sheep stolen from him while he was at war.

Numerous screen engagements followed. Antonioni cast her again in La signora senza camelie/The Lady Without Camelias (Michelangelo Antonioni, 1953) about a newly discovered starlet and her experiences of in the Italian cinema. Juan Bardem cast her in Muerte di un ciclista/Death of a Cyclist  (1955) about an adulterous couple which runs over a cyclist and leaves him to die. Bosé also acted in Francesco Maselli's debut Gli sbandati/The Abandoned (1955) and Luis Buñuel's Cela s'appelle l'aurore/That Is the Dawn (1956). 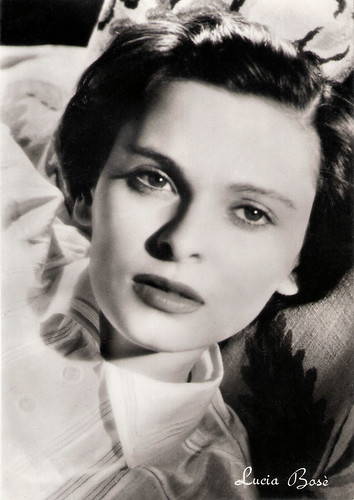 Italian postcard by Italfoto, no. 162.

In 1955 Luci Bosè married Luis Miguel Dominguín, a five years older, popular Spanish bullfighter and occasional actor. From the marriage, which ended in a divorce in 1967, sprang three children, two of whom - Paola Dominguin and Miguel Bosé - are also active as actors. Luchino Visconti was godfather to her son Miguel, Pablo Picasso to her daughter Paola.

At the time, Lucia Bosè lived in Spain and put her career on halt, except for a sporadic appearance in Le testament d'Orphée/Testament of Orpheus (Jean Cocteau, 1959).

In 1968 Bosé returned to film acting after almost a ten year break and worked first in Spain and afterwards in Italy. There she worked among others in Federico Fellini's Satyricon (1969), the Taviani Brothers' Sotto il segno dello scorpione/Under the Sign of Scorpio (1969), and Liliana Cavani's L'ospite/The Guest (1972).

Her most recent screen appearance was in Alfonsina y el mar/One more time (Pablo Benedetti, David Sordella, 2013), as an 80-year-old actress who returns to the small Chilean town of her youth to fulfill her father's dream of creating a TV channel in a place which has never known television. 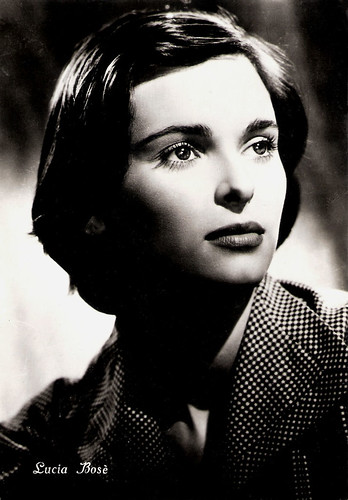 Italian postcard in the series Divi del Cinema by Vetta Traldi, Milano, no. 7.

She beat out Gina in a beauty contest? Now that's really an achievement!