Lively French entertainer Suzy Delair (1917) starred in many different films and was also famous in France as the singer of popular songs as Avec son Tra-la-la. For several years, the saucy star was the companion of film writer-director Henri-Georges Clouzot, in whose films of the 1940s she appeared, including the masterpiece Quai des Orfèvres/Quay of the Goldsmiths (1947). 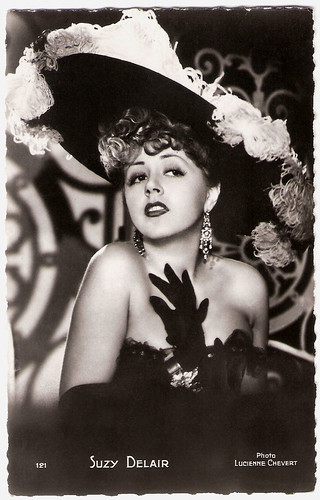 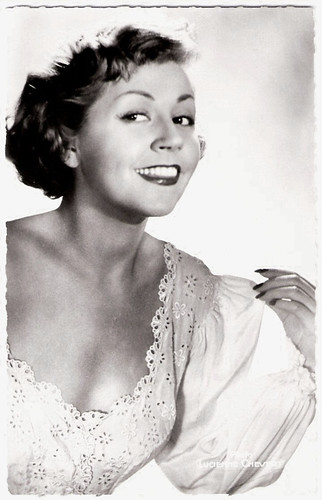 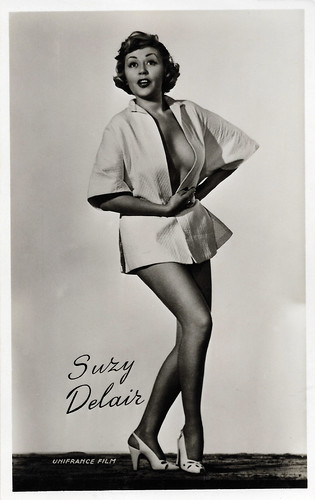 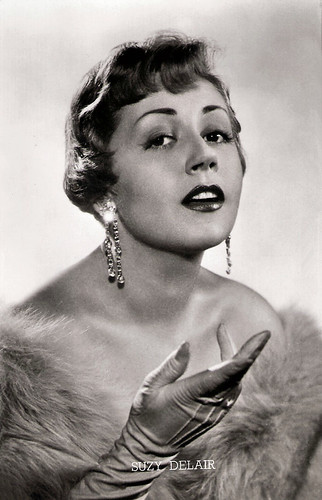 The prototype of the sexy cheeky French lady


Suzanne Pierrette Delaire was born in 1917, in Paris as the daughter of a seamstress and a saddleshop owner.

Her first job was as an apprentice for milliner Suzanne Talbot, but Delaire dreamed of the theatre. As a teenager she started playing bit parts in films and on stage.

Her film debut was Un caprice de la Pompadour/Madame Pompadour (Willy Wolff, Joë Hamman, 1930). She had her first success in the music-halls and appeared in the cabaret of Suzy Solidor and the revue of Mistinquett.

During the 1930s, she played small parts in films like La Dame de chez Maxim's (Alexander Korda, 1932) based on the play by farceur Georges Feydeau, Poliche (Abel Gance, 1934) with Marie Bell, and Prends la route/Hit the Road (Jean Boyer, 1936).

Finally, her breakthrough in the cinema came with Le Dernier des six/The Last One of the Six (Georges Lacombe, 1941). In this mystery thriller, she played cabaret singer Mila Malou, the unbearable girlfriend of the protagonist, inspector Wens (Pierre Fresnay).

The film was based on a script by Henri-Georges Clouzot, with whom Suzy Delair was living together. In 2003, the 85-year-old Delair told the New York Times about Clouzot: "He met me when I was a little debutante, working with Mistinquett. He adored Mistinquett, and he came to one of her shows, where I was singing one of her great successes, Valencia. And he put a cross next to my name. The next time he came to the show, he waited for me at the exit, and we went for a drink. And that lasted for 12 years."

When Clouzot became a director, he offered her two other big successes. First she returned in the popular sequel to Le Dernier des six, L'assassin habite au 21/The Murderer Lives at Number 21 (Henri-Georges Clouzot, 1942).

Then followed Quai des Orfèvres/Quay of the Goldsmiths (Henri-Georges Clouzot, 1947), which made him the 'French Alfred Hitchcock'. In this classic thriller, Delair played the frivolous music-hall singer Jenny L'Amour who is prepared to do anything to become famous, and makes thus her poor husband (Bernard Blier) insanely jealous.

With this great part she emerged to international stardom. At IMDb, Guy Bellinger describes her as the 'prototype of the sexy cheeky French lady'. She was a seductive, stunningly attractive actress with a natural acting style. Sadly, Delair and Clouzot separated and after their successes together, the rest of her film career seems a bit disappointing. However, there are some exceptions. 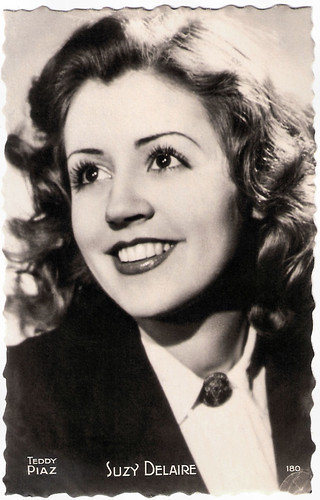 French postcard by Editions Continental, no. 128/A. Photo: Continental Films. 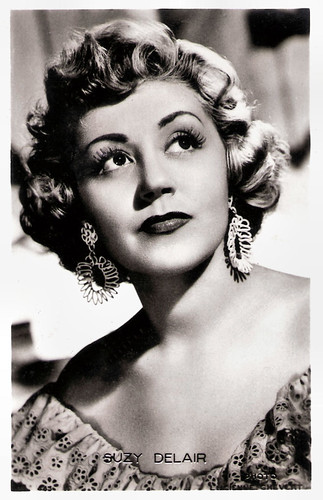 A highlight in her career and a milestone in the history of the cinema was Rocco e i suoi fratelli/Rocco and His Brothers (Luchino Visconti, 1960) starring Alain Delon and Renato Salvatori, even if her part in this operatic masterpiece is a minor one.

Delair covered all registers - from drama to comedy. Ironically, Suzy is probably best known to American filmgoers for what may well be her worst film. In 1950, she appeared as will-of-the-wisp chanteuse Cheri Lamour in the last comedy os the ageing Laurel & Hardy , the melancholy Atoll K/Utopia (Léo Joannon, 1951).

She was a dancer and a singer, and her chanson Avec son Tra-la-la is an evergreen in France. She introduced it in Quai des Orfèvres (1947). Delair also appeared in several operettas by Jacques Offenbach and Oscar and Johan Strauss.

Her last film was Oublie-moi, Mandoline/Forget Me, Mandoline (Michel Wyn, 1976). Since then Suzy Delair only appeared incidentally on television.

Guy Bellinger gives an interesting answer to why Delair is not more famous than she is: "Suzy Delair could hardly choose between her two careers. This may be the reason why she missed out on more great roles than she finally interpreted. Nevertheless, Mila Malou and Jenny Lamour are now part of the French film heritage. Not everybody can boast having left such an imprint on several generations of movie-goers."

Bob, this is the first time I've come across your blog - oo la la! I love it! I joined PFF a couple of weeks ago and I have a post up. but nothing as impressive as your post... :)