Beautiful Marie Prevost (1896-1937) was an American silent screen actress. She started out as one of Mack Sennett's bathing beauties, but after signing a contract with Universal she publicly burned her bathing suit. She became a popular star with sophisticated comedies as The Beautiful and the Damned (1922) and Ernst Lubitsch's The Marriage Circle (1924), but her life ended in tragedy. 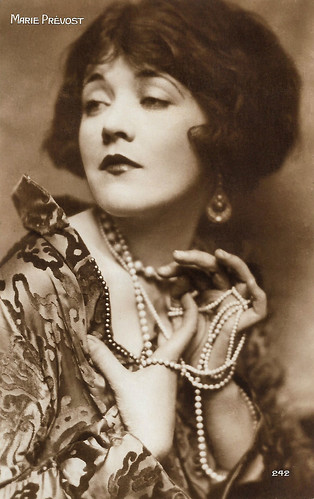 French postcard by Cinémagazine-Edition, no. 242.

Marie Prevost was born in 1896 in Sarnia, Ontario, Canada, but on her birth certicate, it is impossible to decipher the exact spelling of the birth name. She was the daughter of Hughlina Marion (née McDonald) and Arthur 'Teddy' Dunn. Her father worked as a railroad conductor. When Mary was an infant, he was killed when gas seeped into the St. Clair Tunnel. Hughlina later married Frank Prevost. Her sister was the future actress Peggy Prevost. Both were still children when the family moved to the US. First, the family settled in Denver, Colorado, then in Los Angeles.

By 1915, Mary landed a job as a  a stenographer at a law firm which represented the Keystone Film Company. While running an office errand at the Keystone Studios, Prevost was asked to appear in a bit part for the short film His Father's Footsteps (1915).  Keystone's owner, Mack Sennett, also of Canadian origin, entrusted her with the role of an exotic 'French girl' and inserted her into his Bathing Beauties, with the stage name of Marie Prevost.

In 1919, Marie was secretly married to Sonny Gerke, a young man from high society, but the marriage failed after only six months, because Gerke did not have the courage to tell his mother that he had married an actress. Fearful of the bad publicity resulting from a divorce, Marie remained married until 1923, always keeping everyone unaware of her marriage.

At Keystone, Marie appeared in  series of small roles as a young, innocent sexy girl. In 1919, Sennett cast Prevost in her first bigger role in Yankee Doodle in Berlin (Frank Richard Jones, 1919). The film was a hit and helped to solidify Prevost's career. Another successful film was Love, Honor, and Behave (Richard Jones, Erle Kenton, 1920), alongside another Sennett protege, George O'Hara.

In 1921, Marie signed a contract with Universal after getting the attention of Irving Thalberg. Thalberg decided to make her a star and organised a great advertising hype for her. He announced that Marie would star in two films, The Moonlight Follies (King Baggot, 1921) and Kissed (King Baggot, 1922), and sent her to Coney Island. There the actress publicly burned her bathing suit, signifying the end of her 'bathing' days. 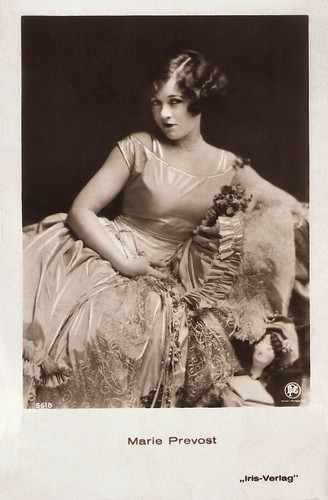 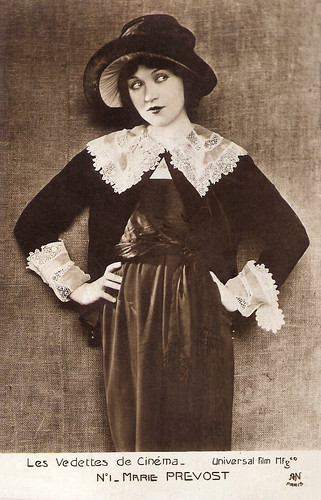 At Universal, Marie Prevost only got light comedy roles. When the contract expired, Jack Warner had her signed for Warner Bros, recognising $ 1,500 a week. Alongside actor Kenneth Harlan as Tony, Marie played Gloria in The Beautiful and the Damned (Sidney Franklin, 1922), based on F. Scott Fitzgerald's bestseller on two idle spendthrifts who do not know how to cope with money running out.

To publicise the film, the production company announced that the actors would get married during filming on the set. The advertising launch worked and the studios were flooded with letters and gifts for the spouses. But when in the Los Angeles Mirror the story of Prevost's earlier secret marriage appeared: "Marie Prevost will become bigamist if she marries Harlan", Warner immediately took charge of the annulment of that marriage, so Harlan and Marie could marry.

Despite the bad publicity, The Beautiful and Damned was successful. By consequence, Ernst Lubitsch wanted Marie as  the beautiful seductress for his film The Marriage Circle (1924), with Adolphe Menjou. Lubitsch said that Prevost was one of the few actresses in Hollywood who knew how to underplay comedy to achieve the maximum effect. He also cast her in  Three Women (Ernst Lubitsch, 1924) with May McAvoy and Pauline Frederick, and Kiss Me Again (Ernst Lubitsch, 1925) with Monte Blue, and Clara Bow.

At Warner's in the mid-1920s, Prevost would star in comedies and dramas with Harrison Ford [the silent actor], Monte Blue, Matt Moore, Douglas Fairbanks jr., and Harlan. In 1926, Warner decided not to prolong the contracts of Harlan and Marie Prevost.

Marie also lost her mother, who was travelling to Palm Beach, Florida, with actress Vera Steadman and producer Al Christie, when their car overturned. Hughina was crushed by the vehicle and died at the scene. Steadman and Christie both sustained serious injuries, but survived. Devastated by her mother's death and losing her work, Marie's marriage deteriorated, she began to drink and soon slipped into alcoholism. 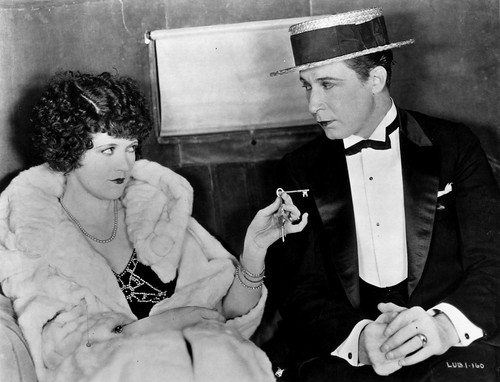 Photo of The Marriage Circle (Ernst Lubitsch, 1924) with Monte Blue. Collection: The Island of Cinema @ Flickr.

She was a winner/Who became her doggie's dinner

In 1927, Marie Prevost separated from her second husband, and despite a reconciliation in between, she divorced him altogether in 1929. To overcome the crisis, Prevost threw herself completely at work. After seeing her in The Beautiful and Damned, in 1928 Howard Hughes wanted her to star in The Racket. The two had a brief relationship but Hughes soon left her and Marie fell into a deepening depression. The Racket (Lewis Milestone, 1928) would be her last leading role in a feature film.

With the advent of sound her thick New England accent didn't lend itself well to the 'demon microphone'. Hal Erickson at AllMovie: "Talking pictures forced Prevost to alter her image; her nasal, high-pitched voice was more suited to wisecracking chorus girls or gum-chewing receptionists than pampered society wives."

In 1929, Cecil B. DeMille offered her a co-starring role in his final silent film The Godless Girl, starring Lina Basquette. Prevost received generally good reviews for her role in the film. In 1930, she appeared in Paid (Sam Wood, 1930), starring Joan Crawford. While Prevost's role was secondary, she still garnered good reviews.

At MGM, Prevost played Academy Award winner Helen Hayes' loyal friend in The Sin of Madelon Claudet (Edgar Selwyn, 1931), and was one of the three leads in the film Three Wise Girls (William Beaudine, 1932), with Jean Harlow. She began to gain weight and could no longer control either food or alcohol.

By 1934, Marie had no work at all and her financial situation deteriorated dramatically. She did a last good supporting part as Carole Lombard's manicurist chum in Hands Across the Table (1936). Her final film appearance was a bit part as a waitress in the action-drama Ten Laps to Go (Elmer Clifton, 1936-1938). To find work again, she faced drastic diets that further weakened her. In 1937, Marie Prevost died of a heart attack due to malnutrition and acute alcoholism. She was only 38.

Her body was found only two days later, due to the continuous and insistent barking of her dachshund dog. A bellhop came into the house and found her lying face down on the bed. Prevost's death was featured in Hollywood Babylon by Kenneth Anger. In the book, Anger falsely claimed Prevost's dachshund consumed her remains to survive. Musician Nick Lowe used details of her life and Anger's account of her death for his song Marie Prevost (1978) including the lyric in the chorus "She was a winner/Who became her doggie's dinner". According to IMDb however, Prevost only had some scratches on her hand where her dog had been pulling at her, probably to try to get her attention.

The funeral at the Memorial Cemetery in Hollywood was paid by Joan Crawford: in addition to Crawford, Clark Gable, Wallace Beery and Barbara Stanwyck participated. Her poor case prompted the Hollywood community to create in the early 1940s the Motion Picture & Television Country House and Hospital to provide medical care for employees of the television and motion picture industry. 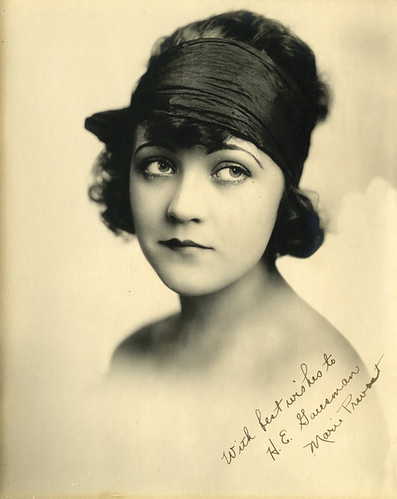 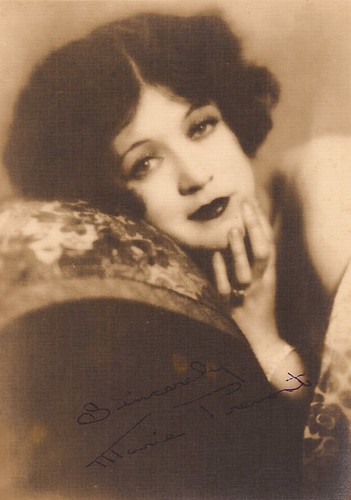