Young Mary Miles Minter (1902-1984) was an American silent screen actress. Between 1912 to 1923, she appeared in over 50 silent films. The popular, innocent looking Miles Minter was the main rival of Mary Pickford. In 1922, she was involved in the major scandal surrounding the murder of director William Desmond Taylor. Her reputation was tarnished, and she gave up her film career at the age of 21. 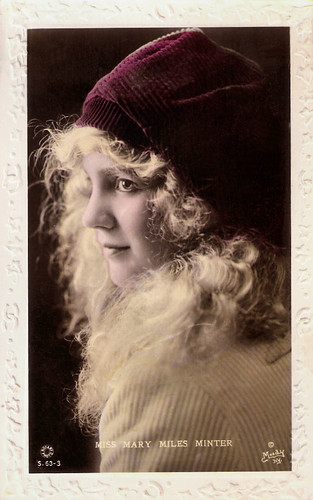 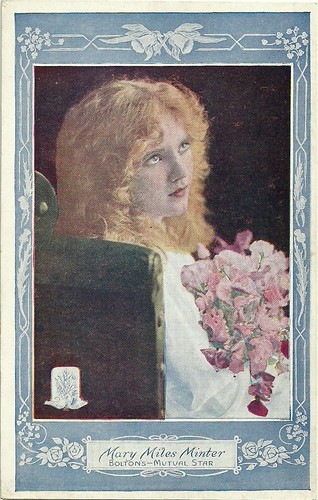 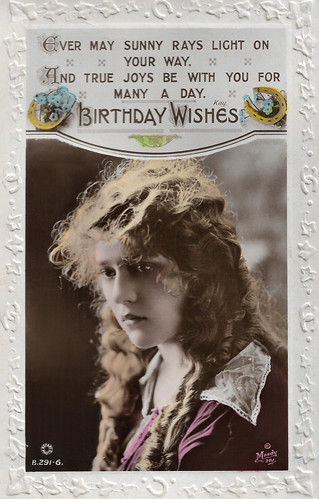 The Rival of Mary Pickford

One night when there was no babysitter available, the 5-year-old Juliet accompanied her sister to an audition, and was discovered. She got her first stage role in the play Cameo Kirby. She soon became noted for both her talent and visual appeal. Her greatest stage success was in The Littlest Rebel, with William Farnum and Dustin Farnum.

She made her cinema debut in the short film The Nurse (Pat Powers, 1912) credited as Juliet Shelby. In order to avoid the Child Labor Act, she took the name 'Mary Miles Minter' from an aunt who, along with her daughter, had died after unknowingly consuming apple cider contaminated with snake's venom. The aunt's daughter's birth certificate was passed off as Minter's own, allowing the ten-year-old to masquerade as a 17-year-old.

Under her new stage name, she got her first substantial lead in a feature film, The Fairy and the Waif (Marie Hubert Frohmann, George Irving, 1915). She played Viola Drayton, the fairy.

Minter's career steadily grew after that. She specialised in playing demure young women. She started to work for Metro Pictures, and in 1916 she moved on to Mutual Pictures. Minter always played the leads in her films, despite her young age. Her early pictures carried this theme with such titles as Lovely Mary (Edgar Jones, 1916), Faith (James Kirkwood, 1916) and Dimples (Edgar Jones, 1916).

With her innocent appearance, her photogenic features, blue eyes and curly blonde hair, Minter became popular and grew into a rival of Mary Pickford. In 1917 she moved to the American Film Company, where Henry King often directed her, and in 1918 she traded American for Paramount. 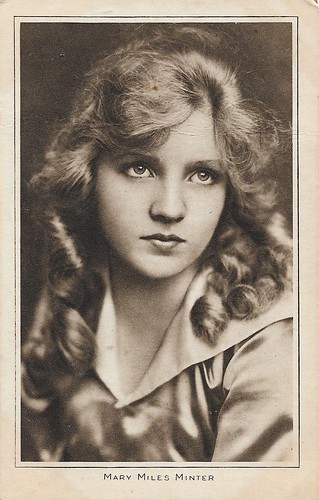 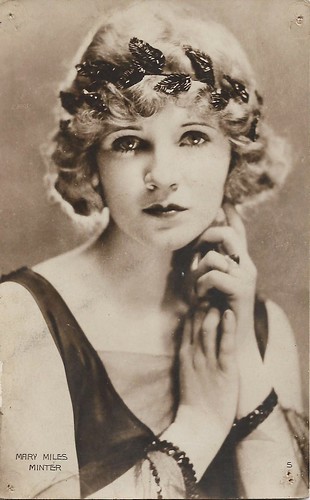 French postcard by Editions Cinémagazine, no. 5.


In 1919 Mary Miles Minter made her most famous film, the comedy-drama Anne of Green Gables with director William Desmond Taylor. It is considered lost now. The film became a huge success. Mary quickly fell in love with Taylor against her domineering mother's openly hostile objections. According to Miles Minter, a romantic relationship developed between the 16-year-old star and her 30-years-older director. But Taylor had reservations from the outset and later curtailed the romance, citing the age difference.

William Desmond Taylor started to promote his young actress, so that she would grow into a legendary star. Several films with Miles Minter in the lead were made by their newly founded production company Realart Pictures, but distributed by Paramount. Taylor initially directed her there, but after a few films various other directors stepped in, such as Paul Powell and Joseph Henabery. Her films included Judy of Rogue's Harbor (William Desmond Taylor, 1920), Jenny Be Good (William Desmond Taylor, 1920) and The Little Clown (Thomas N. Heffron, 1921). Her salary, which started at $150 per week in 1915, increased to $2250 per week.

In 1922 Taylor was murdered in his bungalow in the Westlake area of Los Angeles. The ensuing scandal was the subject of widespread media speculation. Newspapers reported that coded love letters written by Minter had been found in his bungalow after his death. She had written them three years earlier, in 1919. Minter was at the height of her success, having starred in more than 50 films, but the newspaper revelations of the 20-year-old star's association with the 49-year-old murdered director effectually killed her film career.

The murder case was the third major scandal to present itself in Hollywood. The first two were the drug-related suicide of beautiful young actress Olive Thomas in 1920 and the Roscoe 'Fatty' Arbuckle sex party outrage that ended in the death of actress wannabe Virginia Rappe.

In 1970, Miles Minter told in an interview that she collapsed when she saw the body of William Desmond Taylor in the morgue. In the long investigation of his murder, there were several suspects. Mary's mother Charlotte Shelby was long known as a suspect, but the perpetrator could not be found. In 1937, when the case was still unresolved, Minter demanded that she be given a prison sentence or that the case would be left alone.

After Mary's contract at Paramount was bought out for $350,000 in June of 1923, she was broached by other studios such as Ufa and Pathe with film offers, but the scandal took its toll on Mary and she emotionally wanted out of the public eye. She later said she was never happy in the times that she was an actress. In the late 1920s, Mary and her sister Margaret sued their mother Charlotte over mismanagement of their money and won substantial settlements. They eventually reconciled with their mother.

In 1957, Miles Minter married real estate developer Brandon O. Hildebrandt. They remained together until Hildebrandt's death in 1965. Minter told in interviews that she was much happier after her Hollywood years, although she was brutally beaten and robbed in her home in 1981. A former servant was charged with the crime. The 79-year-old Mary managed to recover.

In 1984, Miles Minter died of a stroke in Santa Monica, California, at the age of 82. All in all she had starred in some 53 films of which just a dozen survives. And in 1999 it was announced that one Ella Margaret Gibson admitted on her deathbed in 1964 that she had committed the murder of William Desmond Taylor. Not much later she died of a heart attack. 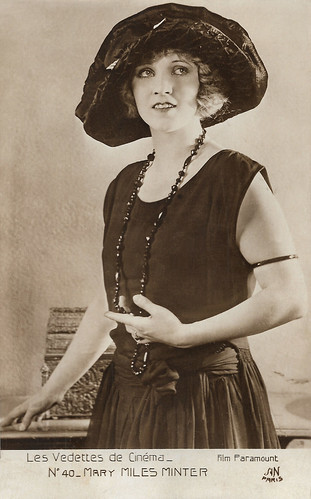