French actress Hélène Rémy (1932) was active in the French and Italian cinema from the early 1950s till the late 1960s. She was also a popular pin-up and cover girl and worked for television and stage. 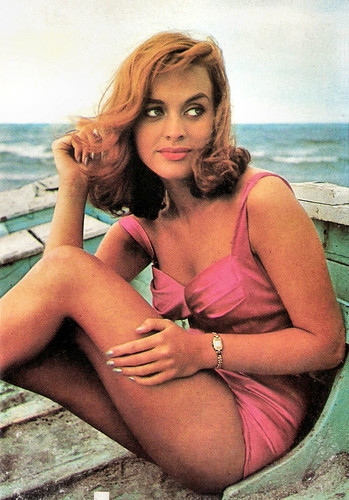 Spanish postcard by Postal Oscarcolor, no. 514.

Hélène Rémy was born in 1932 in Paris, France, where her father was a butcher. She studied dance and at eight, she danced at the Théâtre du Châtelet. Only 15, Roland Petit committed her to the Ballets des Champs-Elysées to replace a failing dancer.

But her mother changed her direction when she sent a picture of her beautiful, blonde daughter to the magazine Cinémonde for a competition. Hélène perfectly personified the Parisian girl and became second at the Miss Cinémonde contest. The jury included Orson Welles and director Julien Duvivier. Welles offered her a part in his stage production La langouste qui ne pense à rien (The Unthingking Lobster) at the Théâtre Edouard VII in 1950.

She had supporting parts in the lesbian-themed Olivia/The Pit of Loneliness (Jacqueline Audry, 1951) starring Edwige Feuillère, and the Italian comedy Parigi è sempre Parigi/Paris Is Always Paris (Luciano Emmer, 1951) as a fresh and cute French newspaper seller who falls in love with Italian Franco Interlenghi. The film was a huge success in Italy.

Like several other French actresses - Catherine Spaak, Jacqueline Sassard, Lise Bourdin, Isabelle Corey and Myriam Bru - she moved to Rome where she found bigger and more rewarding film roles than in her home country. 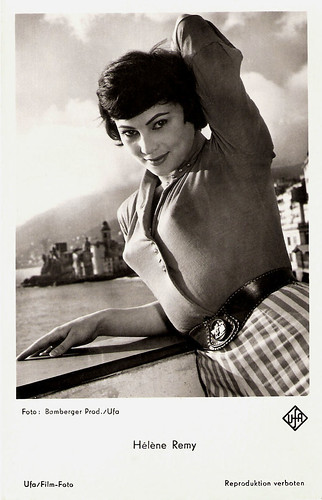 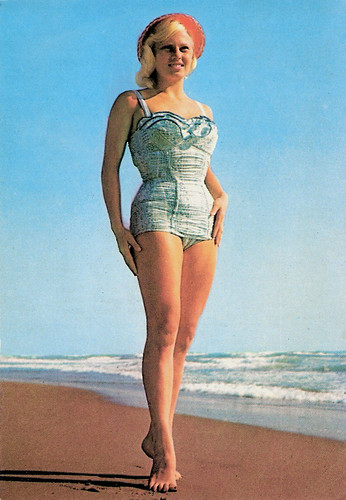 Spanish postcard by Postal Oscarcolor, no. 511.

A popular pin-up and cover girl

In Italy, Hélène Rémy played the female lead in the comedy Un ladro in paradise/A thief in paradise (Domenico Paolella, 1952) and she appeared with Eduardo de Filippo in the comedy-drama 5 poveri in automobile/The Lucky Five (Mario Mattoli, 1952).

After a series of mediocre films in which she had leads, she played a supporting part in Dino Risi's great comedy A porte chiuse/Behind Closed Doors (1961) starring Anita Ekberg.

During the 1960s, she only incidentally appeared in films, such as in the Bourvil comedy Les cracks/The Hotshots (Alex Joffé, 1968). She worked often in the Italian theatre and starred in Italian stage versions of Mam'zelle Nitouche and The Lady from Maxim's.

She also appeared for French and Italian TV in such series as Les dossiers de l'agence O/The records of the agency O (1968). Her final film part was as Lydia, the madam of a brothel in the memorable crime drama Borsalino (Jacques Deray, 1970) with Jean-Paul Belmondo and Alain Delon.