Emilia Vidali was an actress in the Italian silent cinema. Her best known role is Lucia in the silent version of I promessi sposi (1922). She was also an extremely popular opera singer in South America, and performed in international opera houses all over the world. 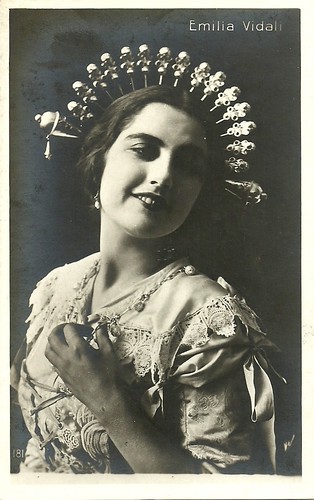 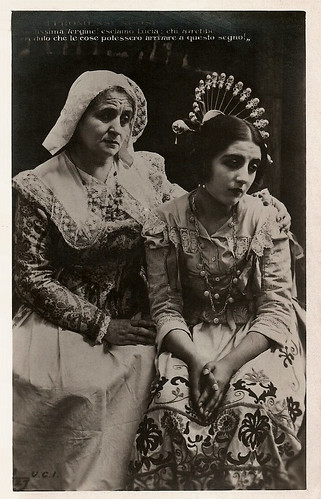 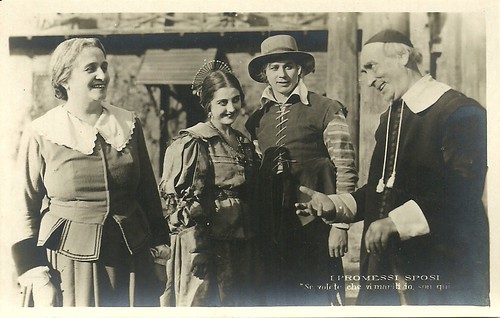 Italian postcard by U.C.I. G. Vettori, Bologna. Photo: Domenico Serra as Renzo, Ida Carloni Talli as Agnese and Emilia Vidali as Lucia in I promessi sposi (Mario Bonnard, 1922). Caption: If you want me to marry you, I'm here. The scene depicts the final scene of the story.


Emilia Vidali was the daughter of actor/director Giovanni Enrico Vidali and his wife Lina Gandini. She was also the younger sister of actress Maria Gandini.

Her sister and her father started in 1911 resp. 1912 at the Turin based film company Pasquali and quickly became leading actors there. Gandini and Vidali sr. for instance played in Sui gradini del trono/On the Steps of the Throne (1912) by Pasquali’s main director Ubaldo Mari Del Colle, and Per il babbo/For Daddy (Umberto Paradisi, 1913).

Immediately hereafter, Vidali made another lavish epic: Spartaco/Spartacus (1913), with strong men Mario Guaita-Ausonia and Luciano Albertini in the leading parts. Vidali went on to make more modest dramas, often with his daughter Maria as one of the leading actresses, such as I promessi sposi/The Betrothed (Enrico Vidali, 1913), which starred Cristina Ruspoli as Lucia and Giovanni Ciusa as Renzo, while Gandini played the Nun of Monza. Again, this film also competed with a homonymous Ambrosio production (1913).

In 1913 Emilia Vidali debuted at Pasquali too. First, she played in films by Del Colle, such as Il principe mendicante/The Beggar Prince (Ubaldo Mari Del Colle, 1913), in which her sister and father co-acted as well. The three played together again in I due sergenti/The Two Sergeants (Eugenio Perego, 1913). The leading actor in these films was Alberto Capozzi.

In 1914/1915 Enrico founded his own company Vidali Film, for which he directed Lo straniero/The Stranger (Enrico Vidali, 1915) with his two daughters and himself. After 1915 Enrico Vidali continued to direct many films featuring himself and his daughter Maria for Vidali Film. They also worked for Italica, Edison and other companies.

Apart from one film in France in the 1920s, Maria Gandini would retire from the film business in 1918. Her father replaced her with an actress called Lydianne. Vidali Film went broke in 1922. 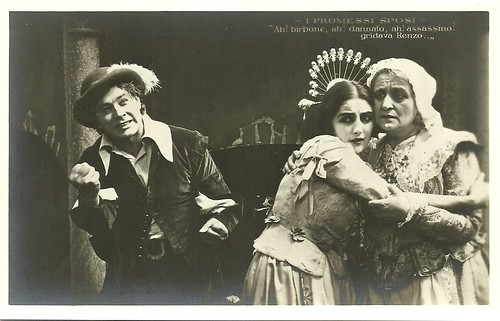 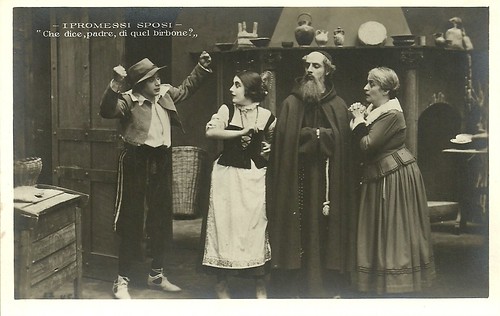 
In 1915, Emilia Vidali took a long break from the screen. In 1922 she had an impressive comeback as Lucia in Mario Bonnard’s adaptation of I promessi sposi/The Betrothed (1922). Domenico Serra played Renzo.

Probably it was at the set of this film that she met her future husband Mario Parpagnoli, who played the evil Don Rodrigo. While Italian critics considered the film 'too grey', audiences loved it. I promessi sposi was awarded a golden medal at a film festival in Turin in 1923.

It didn’t mean a full comeback for Emilia Vidali though. After one more film, Amore e destino/Love and Fate (Mario Parpagnoli, 1923), she left the Italian screen again. Vidali and Parpagnoli had married in the meantime.

Because of the crisis in the Italian cinema, the couple fled to Argentine. There they played in the film Galleguita (Julio Irigoyen, 1924). Parpagnoli himself directed Adios Argentina (1930). He made it as a silent film, but later added a soundtrack.

In the meantime Vidali didn’t sit still in Argentine. She made a career as a singer and stage actress. She became extremely popular and toured the world. In 1927 Emilia Vidali performed on Broadway in the two-act musical revue A Night in Spain, first at the 44th Street Theatre and subsequently at the Winter Garden Theatre, in a grand total of 174 performances. Director was Charles Judels. 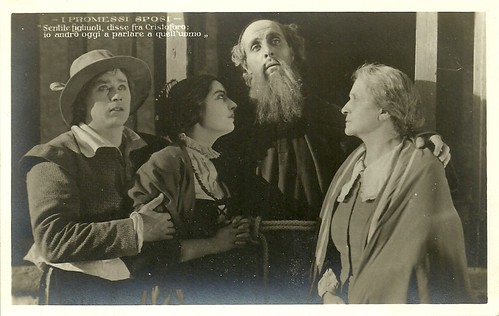 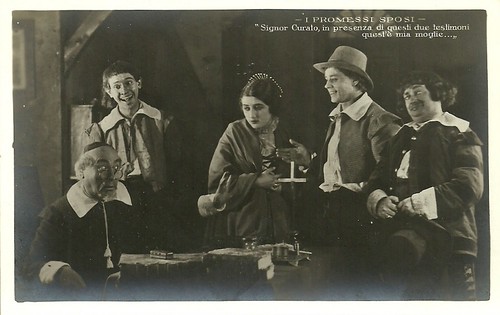 Italian postcard by U.C.I. G. Vettori, Bologna. Photo: Domenico Serra as Renzo and Emilia Vidali as Lucia in I promessi sposi (Mario Bonnard, 1922). Here also with Umberto Scalpellini as don Abbondio. Caption: Curate, in presence of these two witnesses, this is my wife...


In May 1930, Emilia Vidali’s smiling face was on the cover of the Italian theatre magazine Il dramma, announced as a celebrity in Europe, North and South America, and even Australia. The same year she returned to Italy for a tour with La veglia dei lestofanti, the Italian version of the Three Penny Opera by Bertold Brecht and Kurt Weill, and directed by Anton Giulio Bragaglia.

She played a small part in La canzone dell’amore/The Song of Love (Gennaro Righelli, 1930), the first Italian sound feature, starring Dria Pola. In July 1934 Vidali was again on the cover of Il dramma. The magazine wrote that she was by now a famous opera singer, stage and film actress, who had performed and had been acclaimed at the Berlin Wintergarten, the 44 Street Theatre in New York, the Princesa theatre in Buenos Aires, and theatres in Chile, Peru, Havana, Spain and Holland.

After a large Summer tour she would return to the cinema in a film which was constructed all around her. Nothing happened, but she did play another small part in the opera film Casta diva (Carmine Gallone, 1935), starring Marta Eggerth. Her final film role was in the comedy Bertoldo, Bertoldino e Cacasenno/Bertoldo, Bertoldino and Cacasenno (Giorgio Simonelli), 1937.

In the mid-1930s Vidali performed with the Autori Associati all around Italy, singing popular songs like Mariastella, Prigioniera and Quanta neve è caduta. She also recorded songs for La voce del padrone, the Italian version of His Master’s Voice.

Vidali dedicated herself to opera. In 1939 she sang in Margherita da Cortona at the Roman Opera, and in 1940 in L’Amico Fritz in Ancona and in Le donne curiose in Rome. During the war years she sang L’amoroso forfante (1941) at the theatre festival in Bergamo and in Claudio Monteverdi’s L’incoronazione di Poppea (1943) at the Teatro dell’Opera in Rome.

In 1943 she also sang in Nina o la pazza per amore, conducted by Tullio Serafin at the Teatro delle Arti in Rome. The war time, was a strenuous time for the Vidali’s. According to the site of Emilia’s son, Aldo Vidali, the family experienced frightful moments. The family was at risk of being arrested and shot.

After the war, they moved to Brazil. Emilia Vidali would again perform there and sang pieces from La Bohème, Il Trovatore and Andrea Chenier in the Teatro Colombo in Sao Paulo in 1952. In 1954 she also directed Madame Butterfly at the Teatro Colombo.

Neither Emilia Vidali's birthdate and birthplace nor the place and the year of her death are known. 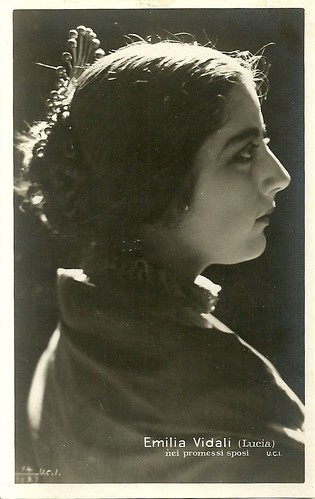 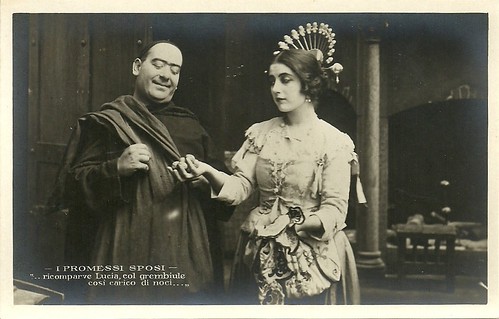 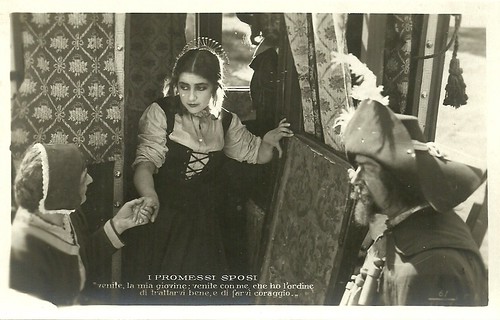 Italian postcard by U.C.I. G. Vettori, Bologna. Photo: Emilia Vidali as Lucia in I promessi sposi (Mario Bonnard, 1922). Lucia's kidnapping by Nibbio, the bravo of the Innominato, with the help of Gertrude, the nun of Monza (Niní Dinelli). Caption: Come, my child, come with me, as I have orders to treat you well and give you courage.