Before Hollywood: The Flying "A"

The American Film Manufacturing Company, also known as The Flying "A", was an influential and prolific American film studio between 1912 and 1921. In 1915, the formal name was changed to the American Film Company. The studio, located in Santa Barbara, produced nearly one thousand silent films before it was closed. 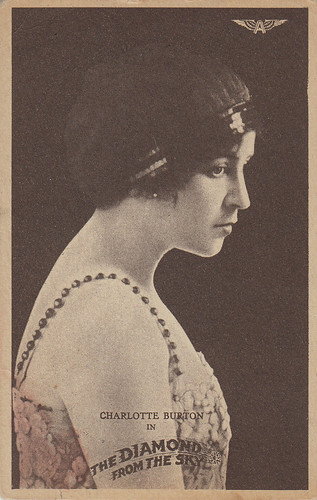 Charlotte E. Burton (1881-1942) was an American silent film actress. She worked for such pioneering studios as Flying A and Essanay. Her films for Flying A included the short drama The Rose of San Juan (Sydney Ayres, 1913) with Sydney Ayres and Louise Lester, and the short drama Her Big Story (Allan Dwan, 1913) starring J. Warren Kerrigan, and Jail Birds (Sydney Ayres, 1914) starring William Garwood and Jack Richardson. She appeared opposite Lottie Pickford in the serial The Diamond from the Sky (Jacques Jaccard, William Desmond Taylor, 1915), which told the story of the diamond heirloom of the Stanley family. 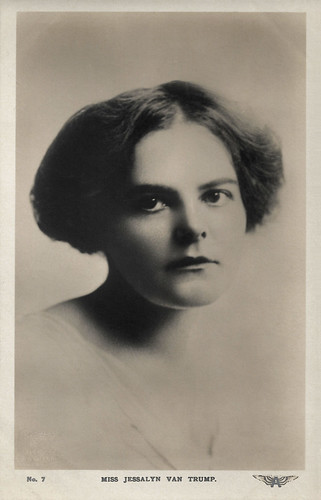 American postcard by Flying A, no. 7. Photo: Flying A.

American silent film actress Jessalyn Van Trump (1887-1939) starred and supported in over 110 films between 1911 and 1928. Jessalyn starred opposite the legendary cowboy star J. Warren Kerrigan in many short Westerns produced by the American Film Company (or Flying A), including Three Daughters of the West (Allan Dwan, 1911), and The Smoke of the .45 (Allan Dwan, 1911). The following year, she played in Geronimo's Last Raid (John Emerson, 1912), opposite J. Warren Kerrigan, Pauline Bush, and Jack Richardson. The film is set around the capture and escape of Geronimo, a prominent Native American leader of the Chiricahua Apache. 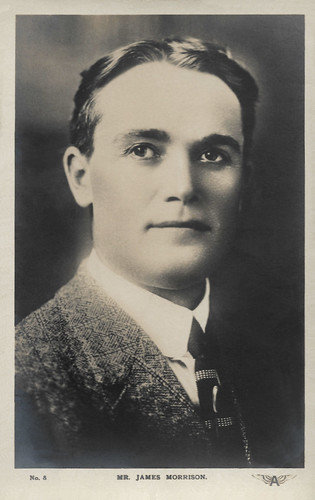 American postcard by Flying A, no. 8. Photo: Flying A.

James Morrison (1888-1974) was an American silent film actor and author. As one of the Vitagraph company's first matinee idols, he starred in countless one and two-reel melodramas and remained with this company for six years. He later returned to Vitagraph often as a freelance actor as well. He appeared in 187 films between 1911 and 1927. 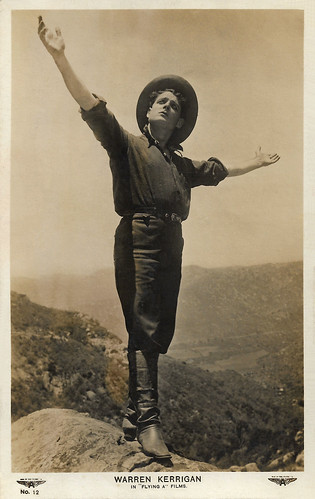 American postcard by Flying A, no. 12. Photo: Flying A.

J. (Jack) Warren Kerrigan (1879-1947) started to act as a leading man in short films for Essanay Studios from 1910 onwards. In 1910 he already acted in some 20 short films at Essanay: Westerns, comedies, etc., quite a few directed by ‘Broncho Billy ‘ Gilbert M. Anderson. In the very same year, Kerrigan shifted to the Flying A, where Kerrigan was often cast as a modern man of the age. His nickname was The Gibson Man. Some of his films at American were directed by Allan Dwan. At American, the production must have had killing time schedules, as according to IMDb some 90 short films were produced in 1911, almost 100 in 1912, some 75 in 1913, so basically two every week. During 1913 both Dwan and Kerrigan shifted to the Victor company (later Universal). 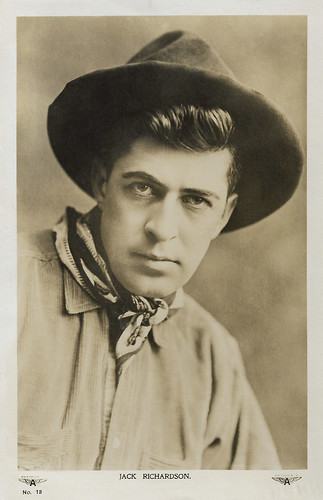 American postcard by Flying A, no. 13. Photo: Flying A.

Jack Richardson (1870-1960) was a star of early American cinema. In 1911, he was signed to a contract in silent films by the American Film Manufacturing Company and appeared in dozens of short (10 minutes) Westerns such as The Boss of Lucky Ranch (Allan Dwan, 1911), A Cowboy's Sacrifice (Allan Dwan, 1911) and The Sheriff's Captive (Allan Dwan, 1911), all with J. Warren Kerrigan and Pauline Bush. Richardson worked at Flying A for several years. His short films there include the Western Geronimo's Last Raid (John Emerson, 1912), the historical drama In the Days of Trajan (Lorimer Johnston, 1913), A Story of Little Italy (Lorimer Johnston, 1914) with Sydney Ayres, The Black Ghost Bandit (Tom Ricketts, 1915) in which he starred, and The Awakening (William Bertram, 1916) with Art Acord. 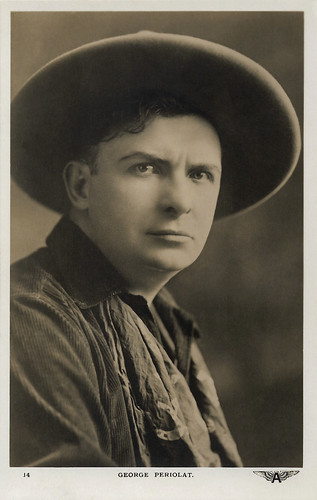 American postcard by Flying A, no. 14. Photo: Flying A.

George Periolat (1874-1940) was a versatile American actor, who acted in 170 mostly silent films. From 1910 he acted for the American Film Manufacturing Company (The Flying A). In 1911, he moved to California and continued to play in several short films by director Allan Dwan for The Flying A. In late July 1913, Dwan visited Universal's offices in New York City. Carl Laemmle offered Dwan and his colleagues double their pay from The Flying A if they would come to Universal. In the following weeks, J. Warren Kerrigan, Pauline Bush, and George Periolat moved to Universal and would work together with Dwan on The Restless Spirit (Allan Dwan, 1913). 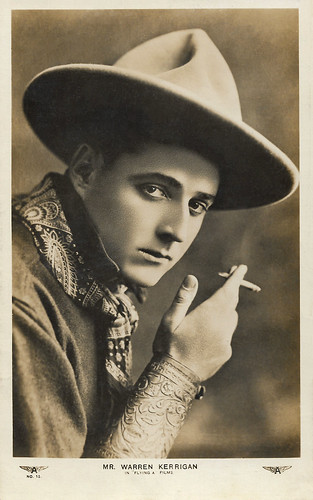 American postcard by Flying A, no. 15. Photo: Flying A.

J. (Jack) Warren Kerrigan (1879-1947) was an American star of the silent screen. From 1910, he had a most active career first in shorts at Essanay, American at Victor, then in features at Universal. After a gap in the early 1920s, he came back with a bang in James Cruze's The Covered Wagon (1923) but stopped acting in 1924 after a car accident.

Santa Barbara as a filmmaking center rivaled only by Hollywood


The American Film Manufacturing Company was founded in Chicago in the fall of 1910 by Samuel S. Hutchinson, John Freuler, Charles J. Hite, and Harry Aitken, four Midwestern businessmen who joined forces and capital to create the company.

Flying "A" Studios was located in La Mesa, California, from August 1911 to July 1912, using filming locations in La Mesa and other East County areas such as Lakeside, in addition to sites around San Diego.

Under the leadership of Allan Dwan, Flying "A" made over 150 films in San Diego County. The films were usually Westerns, comedies, or an occasional local documentary. The Flying A Westerns were popular with the public and kept Dwan and his crew extremely busy. The Dwan Westerns gave the Flying A the ability to mount large advertising campaigns, create additional films, and become a player in the motion picture industry.

While mostly filming in the backcountry near La Mesa, some sets were built behind the Flying A Studios. Dwan would occasionally film a cowboy chase scene and then build a plot around that chase. Dwan's troupe of actors became very popular with the public.

In August 1912, Flying "A" Studios established its Western branch in Santa Barbara. Prior to this, three shooting companies were created. Two would work at the studio or surrounding locales of Chicago, while it was the third unit that was sent out to concentrate on Westerns. This Western unit would move through the southwest with stops in New Mexico, Arizona, and finally California.

The third unit would eventually settle in the town of La Mesa before moving Northwest to Santa Barbara. California was chosen for its sunny weather, and to avoid the constraints of the Edison Trust (The Motion Picture Patents Company or MPPC) operating in Chicago and New York.

The main reason for choosing Santa Barbara before La Mesa was that the American Film Company wanted to have urban backdrops in some of its films. During its operation between 1912 and 1917, Flying "A" Studios was one of the largest motion picture studios in the United States. At the time, this made Santa Barbara a filmmaking center rivaled only by Hollywood.

When the American Film Company was formed in 1910, it culled many performers, directors, scenario writers, and crew members from Essanay Studios. Among the directors and writers that worked for American were Frank Beal, Allan Dwan, J. Warren Kerrigan, and Tom Ricketts. In 1913, Wallace Reid directed several society dramas for the company.

In mid-1918, American Film Company lost its primary distributor when Mutual Film folded. The company signed with a new distributor, Pathé, and continued to produce features. Over the next three years, the company's output decreased significantly. In 1921, one of American's most prominent contract players, Margarita Fischer, left the company. American Film Company was dissolved shortly thereafter. 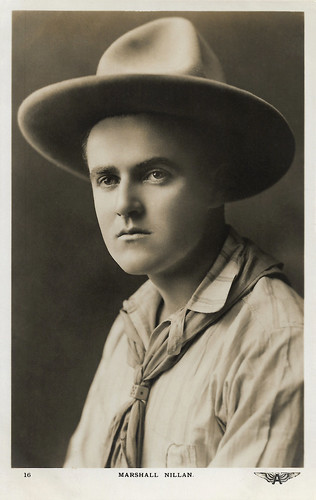 American postcard by Flying A, no. 16. Photo: Flying A.

In the early days of silent pictures, legendary director Marshall Neilan (1891-1958) started his film career as an actor. In 1912, Neilan worked as a car salesman at a dealership in La Mesa when he was instructed to deliver a car to a nearby film location, whose director had just purchased it. Neilan delivered the car to the director, Allan Dwan, at the Flying A. Since Dwan didn't know how to drive, Neilan took him out and taught him. The two hit it off and Dwan asked Neilan if he wanted to be an actor in his film The Stranger at Coyote (Allan Dwan, 1912), starring J. Warren Kerrigan and Pauline Bush. When Neilan discovered that the job would pay twice as much as his car salesman job, he took it, beginning his long career as an actor, writer, and director. 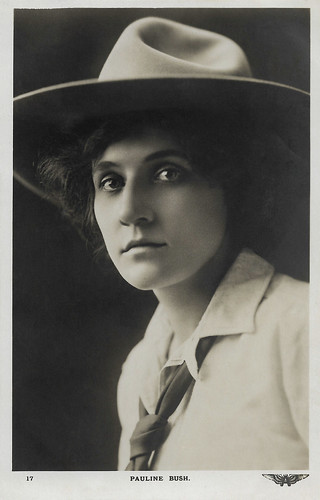 American postcard by Flying A, no. 17. Photo: Flying A. 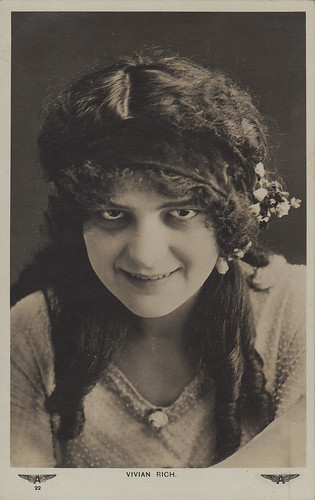 American postcard by Flying A, no. 22. Photo: Flying A. Collection: Marlene Pilaete.

American actress Vivian Rich (1893-1957) was a prolific silent screen star. She was a leading lady for such pioneering studios as Flying A and Nestor. From 1912 on, she starred in almost 200 films. 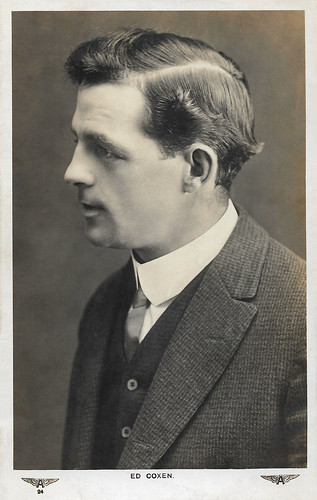 American postcard by Flying A, no. 24. Photo: Flying A.

Edward Coxen (1880-1954) was an English-born American actor. He started his film career at Flying A in 1912 and appeared in over 200 both silent and sound films during his career. Much of his work was in melodramas and Westerns. 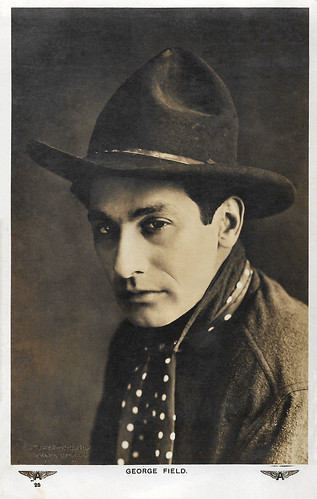 American postcard by Flying A, no. 25. Photo: Flying A. 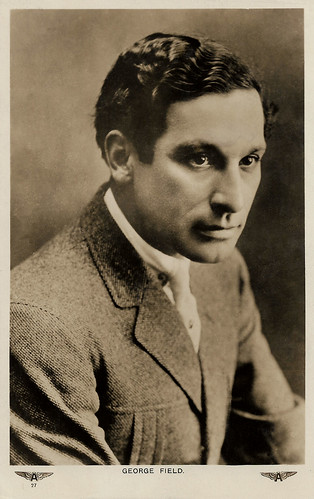 American postcard by Flying A, no. 27. Photo: Flying A. 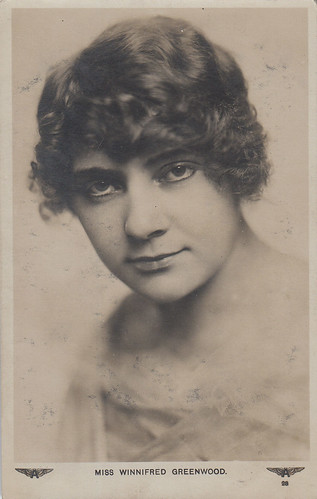 American postcard by Flying A, no. 28. Photo: Flying A. Collection: Marlene Pilaete.

Winifred Greenwood (1885-1961) was an American silent film actress. She starred in a number of films with Charlotte Burton including The Shriner's Daughter (Thomas Ricketts, 1913). She played a child model in The Beggar Child (William Desmond Taylor, 1914). Between 1910 and 1927, she starred in over 200 films. 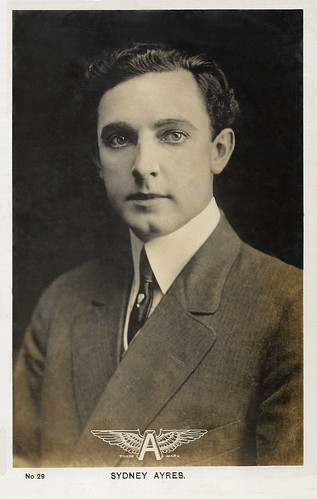 American postcard by Flying A, no. 29. Photo: Flying A.

American actor Sydney Ayres (1879-1916) was a handsome, dark wavy-haired leading man who appeared on the New York stage and starred in early silent films. Ayres also directed and wrote scenarios. He worked for various studios including Flying A. 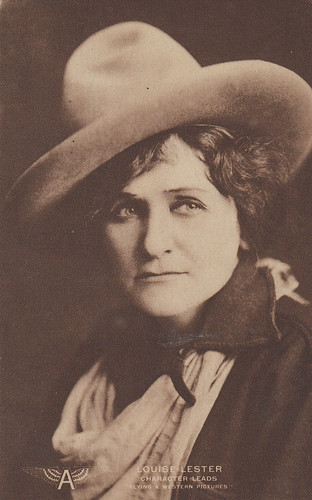 American silent film actress Louise Lester (1867-1952) was the first female star of the Western. She starred in over 150 films before her retirement in 1935. She made her film debut at the Flying A Company in Santa Barbara, California. She was the first actress to play Calamity Anne on screen in a series of short Westerns made between 1912 and 1914.

Check out our earlier Before Hollywood posts: Vitagraph, Essanay, Biograph, and Lubin.

Thank you for this wonderful presentation of American Film Company postcards. I suggest revising the character title for Louise Lester's substantial series of one-reelers from "Calamity Jane" to Calamity Anne. Also, any Calamity Anne films dated after 1914 are re-releases.

Thank you. It's revised.