The 1950s brought Austria the largest film production boom in its history, but without a neorealist or New Wave school, which had revitalised other European cinemas during this era, and with no national subsidies. It was the age of musical comedies, which had already become popular in the 1930s, and of Heimatfilme, sentimental films with a rural setting. The postcards of the Austrian publisher Kellner-Fotokarten illustrate this boom of the Austrian commercial cinema and its stars but they also present many other popular European film stars of the 1950s. Nowadays, Kellner still exists as 'Verlag Kellner Scholtyssek KEG' in Korneuburg, Austria, and the firm still publishes postcards. 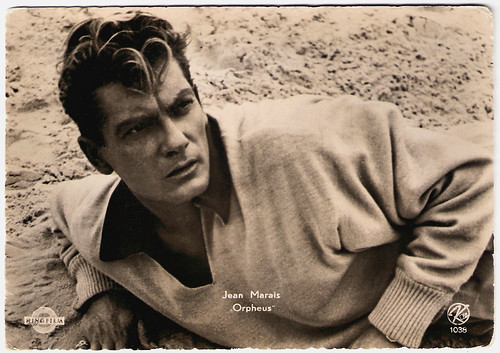 With his heroic physique, Jean Marais (1913-1998) was France’s answer to Errol Flynn, the epitome of the swashbuckling romantic hero of French cinema. The blonde and incredibly good-looking actor played over 100 roles in film and on television and was also known as a director, writer, painter and sculptor. His mentor was the legendary poet and director Jean Cocteau, who was also his lover. 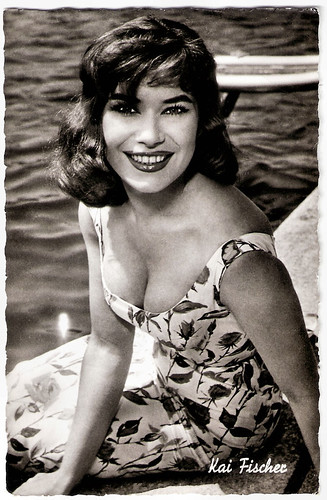 Austrian postcard by Kellner-Fotokarten, Wien, no. 287.

Red-haired and spirited German actress Kai Fischer (1934) appeared in 54 films between 1955 and 2004. She was the naughty bad girl of the Wirtschaftwunder cinema, and also appeared in sexy roles in international productions, either as a prostitute or a gangster girl. Later she worked with famous directors such as Wim Wenders and Ingmar Bergman. 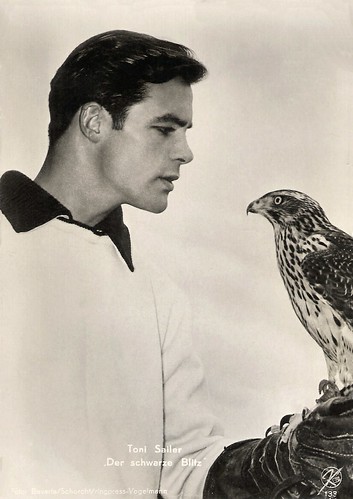 Toni Sailer (1935-2009) was a legendary Austrian alpine ski racer, one of the best the sport has ever produced. The ‘Black Blitz from Kitz’ appeared as an actor and singer in several films and TV series. He was a national hero and matinee idol rolled into one. 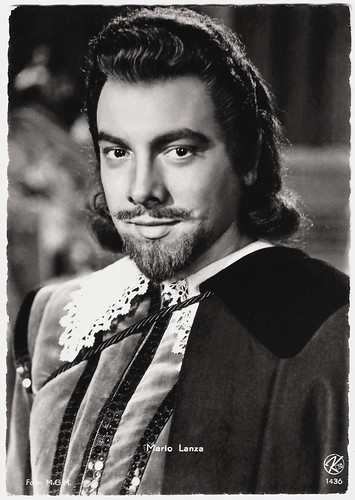 Mario Lanza (1921-1959) was an American tenor, actor and Hollywood film star of the late 1940s and the 1950s. His masterpiece was The Great Caruso (Richard Thorpe, 1951), the top-grossing film in the world in 1951. Lanza's voice was so dazzling that an awestruck Arturo Toscanini called it the "voice of the century". 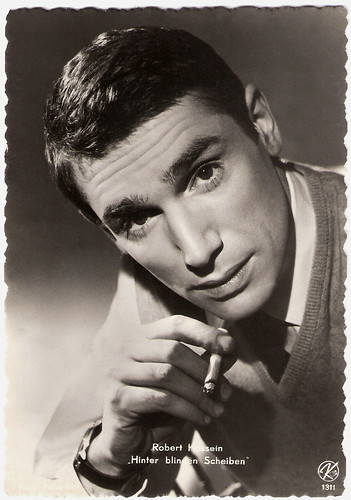 French film actor, director and writer Robert Hossein (1927-2020) was generally cast as a tough guy beside such gorgeous actresses as Brigitte Bardot, Sophia Loren and Marina Vlady. He is most famous though as Michèle Mercier's husband in the wildly popular Angélique series of the 1960s.

Austria's cities were devastated and filmmakers set their works in the countryside to show the population the "good and beautiful" Austria.

The Heimatfilm genre came to life and remained popular from the late 1940s to the early 1960s. The films suggested a whole, romantic world untouched by war and the hazards of real life. More than three hundred Heimatfilme were produced in Germany, Austria and Switzerland during the 1950s.

Heimatfilme were usually shot in the Alps, the Black Forest, or the Lüneburg Heath, and always involved the outdoors. Their characteristics were their rural settings, sentimental tone and simplistic morality, and they centred on love, friendship, family and non-urban life.

They also involved the difference between old and young, tradition and progress, and rural and urban life. The typical plot structure involved both a good and bad guy wanting a girl, conflict ensuing, and the good guy ultimately triumphing to win the girl, making all (except the bad guy) happy. 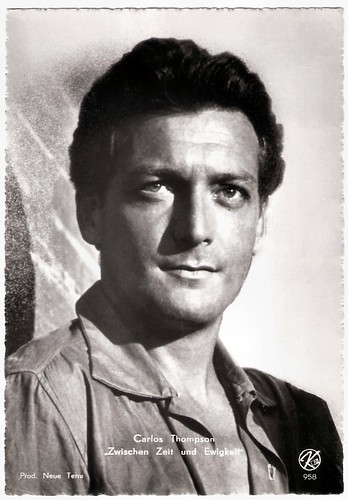 Handsome Carlos Thompson (1923-1990) was an Argentinian heartthrob of German-Swiss parentage. He started his career in Argentina playing leading roles on stage and in films. In the 1950s, he went to Hollywood and was typically cast as a European womaniser opposite such stars as Lana Turner and Yvonne De Carlo. He moved to Europe and appeared in a large number of German-language films. In the late 1960s, Thompson left acting to become a writer and TV producer. 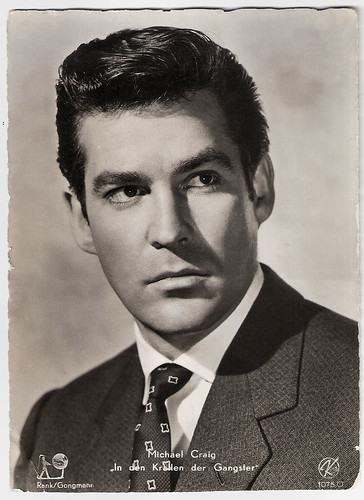 British actor Michael Craig (1928) is known for his work in theatre, film and television both in the United Kingdom and Australia. He also worked as a scriptwriter, such as for The Angry Silence (1960). In Italy, Luchino Visconti directed him in Vaghe stelle dell'Orsa.../Sandra (1965). 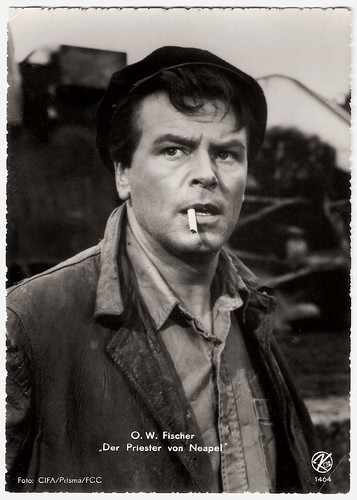 Austrian actor O.W. Fischer (1915–2004) was one of the most popular and highest-paid actors in German-language films in the 1950s. He played the lead in dozens of light romantic comedies and historical pieces. Unlike countrymen Curd Jürgens, Maria Schell and Romy Schneider, he never made it internationally. 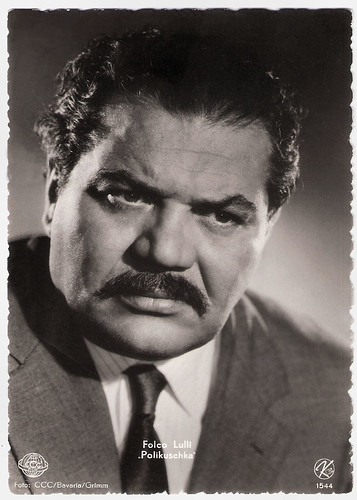 Acclaimed Italian film actor Folco Lulli (1912–1970) appeared in 104 films between 1946 and 1970, mainly in strong character roles. He was very active in both Italian and French cinema. Now he is best known as one of the four nitro-glycerine truck drivers in Henri Georges Clouzot‘s classic nail-biter La Salaire de la Peur/The Wages of Fear (1953). 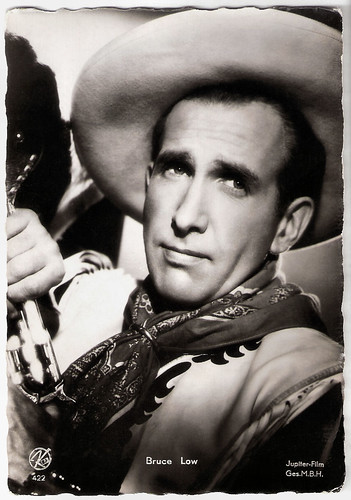 Bruce Low (1913-1990) was a Dutch Schlager and gospel singer and actor who had an impressive career in West Germany and Austria.


During the age of the Wirtschaftswunder, there was little popular call in Austria for serious or critical films.

These imperial epics were set at the time of the Austro-Hungarian Empire as this period is identified with luxury, elegance, romance and a vision of Austria as large, powerful and peaceful. Extremely popular were Ernst Marischka's Sissi films starring Romy Schneider as Empress Elizabeth which found not only domestic but international success.

These films were the model for many other Austrian films of the period, such as Franz Antel's imperial-era musicals. The highly prolific Franz Antel became a household name with these films and with his popular comedies. These films rivalled Hollywood entertainment at the international box office. 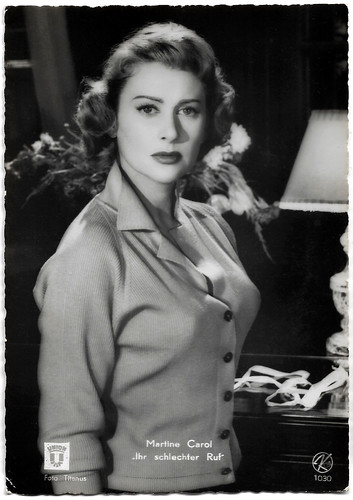 Sex symbol Martine Carol (1920–1967) was one of the most beautiful women in French cinema. During the early 1950s, she was a top box office draw as an elegant blonde seductress. Her private life was filled with turmoil including a suicide attempt, drug abuse, a kidnapping, and mysterious death. 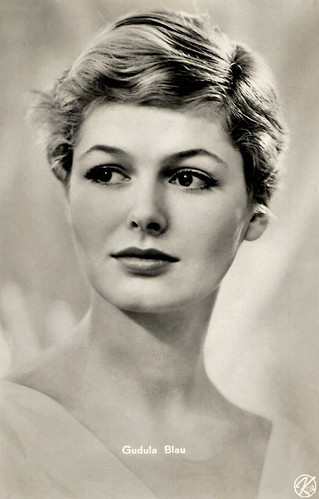 Austrian postcard by Kellner-Fotokarten, Wien, no. 81066.

Beautiful blonde Gudula Blau (1940) was a German actress who briefly appeared in German and Austrian entertainment films of the late 1950s. Later, she worked as an author, singer, and politician and incidentally played guest roles on television. 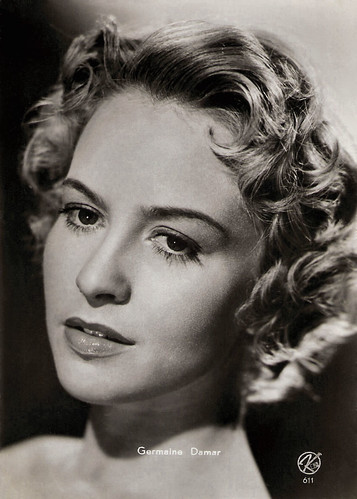 Austrian postcard by Kellner-Fotokarten, Wien, no. 611.

Luxembourg actress and dancer Germaine Damar (1929) started her career as an acrobat. She played in nearly 30 German films, including three films in which she was the partner of Peter Alexander. 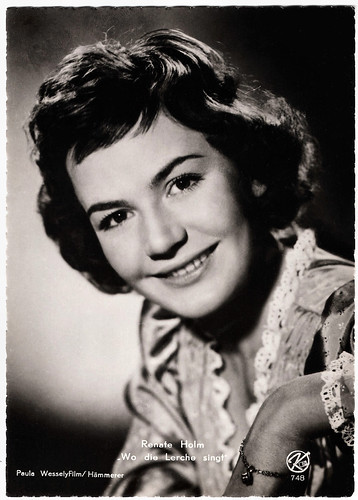 Renate Holm (1931-2022) is a German-Austrian film actress and operatic soprano. During the 1950s she was a popular star of Schlager films and operettas. In the 1960s, she became a star at the Vienna State Opera under the direction of Herbert von Karajan. 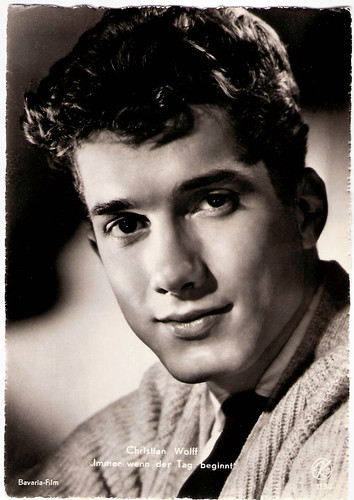 Handsome Christian Wolff (1938) was a young lover of many German films of the late 1950s. He started out in the controversial 'gay' film Anders als Du und Ich/The Third Sex (1957) and later became a popular TV star in the long-running family series Forsthaus Falkenau (1989-2006). 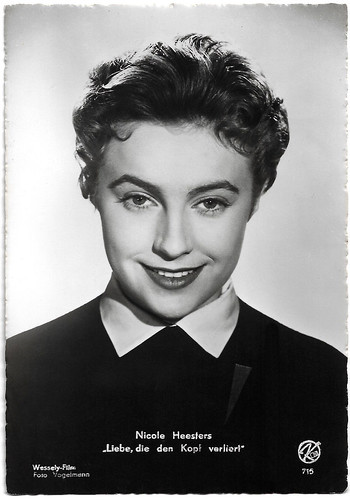 Austrian actress Nicole Heesters (1937) is the daughter of Dutch-born film star Johannes Heesters. With a rich film and stage career, she stepped out of the shadow of her famous father. As a film actress, she became known in the 1950s for such films as Dieses Lied bleibt bei Dir/Cabaret (Willi Forst, 1954). Later she played in dozens of TV films and series. 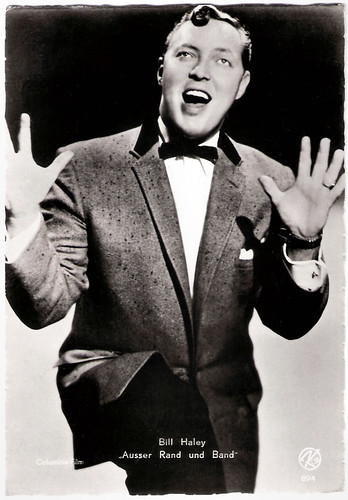 Bill Haley & His Comets was an American rock and roll band that was founded in 1952 and continued until Haley's death in 1981. The band, also known by the names Bill Haley and the Comets and Bill Haley's Comets (and variations thereof), was the earliest group of white musicians to bring rock and roll to the attention of white America and the rest of the world. 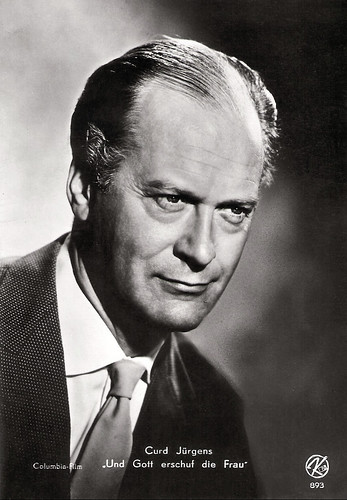 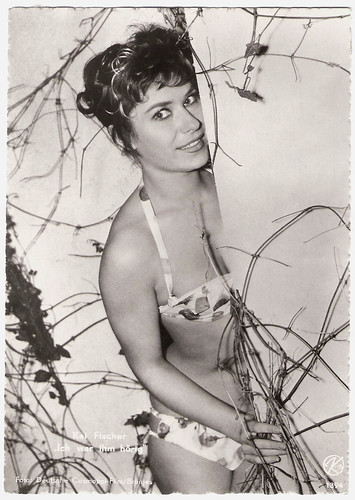 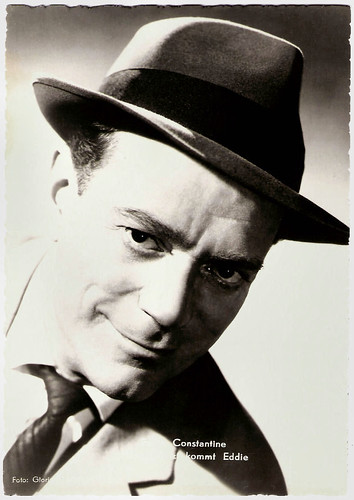 Craggy-faced Eddie Constantine (1917-1993) was an American actor and singer who spent his career as a tough guy in European films. He became famous for a series of French B movies in which he played private eye Lemmy Caution, based on the hero of the detective novels by Peter Cheyney.