Three years ago, EFSP did a post on Ed. G. Vettori which published stage and film star postcards in Italy during the 1910s and 1920s. The Bologna-based publisher made thousands of black and white postcards which showed film stills and studio portraits, often made in their own photo studio. The subjects were well-known national actors but also international stars. Recently, Ivo Blom acquired a series of Vettori postcards that offers a panorama of the now mostly forgotten male stars of the Italian stage and cinema in the 1910s and 1920s. 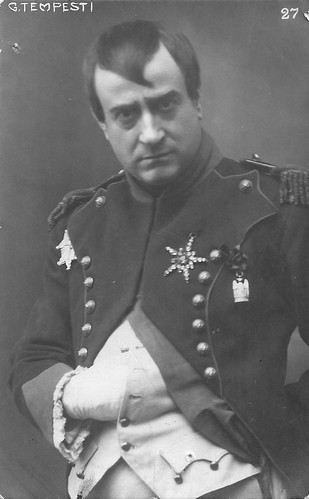 Between 1934 and 1943, Italian stage and screen actor Giulio Tempesti (1875-?) acted in twenty Italian sound films, starting with La cieca di Sorrento (Nunzio Malasomma, 1934). In this film the son (Corrado Racca) of a man falsely executed for killing an aristocratic woman returns to Italy after studying medicine in England, and operates on the woman's daughter (Dria Paola) who had become blind after witnessing the crime. Tempesti played the girl's father. Afterward, he played mostly small supporting parts. Substantial were his parts as courtroom president in La grande luce - Montevergine (Carlo Campogaliani, 1939) and as Don Lorenzo in Giacomo l'idealista (Alberto Lattuada, 1943), an adaptation of Emilio De Marchi's novel on the resistance against the injustices of the aristocracy, starring Marina Berti, Massimo Serato, and Andrea Checchi. 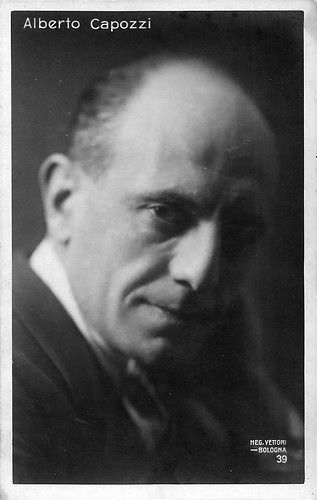 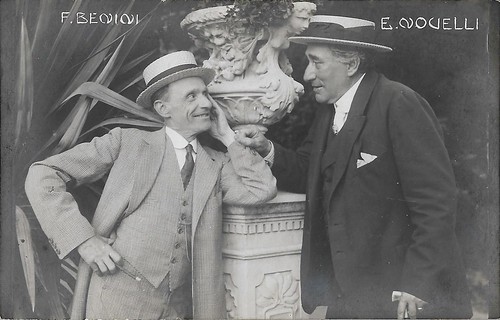 Ferruccio Benini and Ermete Novelli collaborated on the propaganda film project Per la patria! (Ugo Falena, 1915), which combined nonfiction footage of the battlefields with footage of stage actors filmed in their famous roles. It was Benini's sole film part. He died soon after the film was made. Ermete Novelli (1851-1919) was a legendary monstre sacré of the theatre. In the 1910s he appeared in films by Film d'Arte Italiana, Ambrosio and Raggio Film. 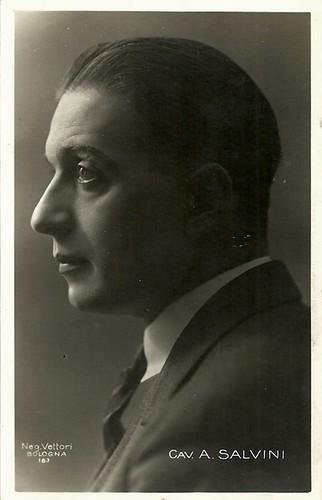 Sandro Salvini (1890-1955) was an actor and director of Italian dubbing. He made his film debut in 1917 in a Cines film with Lyda Borelli: La storia dei tredici (Carmine Gallone, 1917). After a few more Cines films Salvini shifted to Caesar Films, where he acted opposite Francesca Bertini in Anima allegra (1919), La contessa Sara (1919), La serpe (1920), and Lisa Fleuron (1920), all directed by Roberto Roberti. He then acted in two films by Herbert Brenon shot in Italy: Il colchico e la rosa/Little Sister (1921) and Beatrice/The Stronger Passion (1921). He also had leads in J. Gordon Edwards' films Nero (1922) and The Shepherd King (1923), shot for Fox in Italy. Apart from one film in 1927, Salvini's film career stagnated after 1923 and was only revived when sound cinema arrived in Italy. 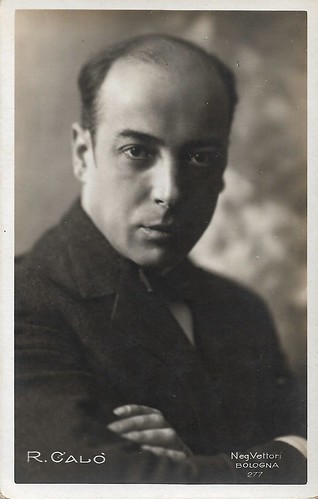 Romano Calò (1883-1952) was an Italian stage, screen, and radio actor and director, who was active in film since the silent film era. Calò's film debut was a minor part in Lucio D'Ambra's Napoleoncina (1918), starring Mary Corwin. With D'Ambra and Corwin, Calò did two more films in 1919, La valse bleue and Il girotondo degli undici lancieri, plus one without Corwin, L'arcolaio di Barberina. In 1919, he also played at Caesar Film Francesca Bertini's lover in Spiritismo by Camillo De Riso. Calò acted at Nova Film opposite Diana Karenne in such films as Miss Dorothy (Giulio Antamoro, 1920), La campana dello scandalo (Giulio Antamoro, 1920), and Smarrita! (Giulio Antamoro, 1921). At Nova Film, he also acted with Carmen Boni in the Pirandello adaptation Ma non è una cosa seria (Augusto Camerini, 1921). Then Calò was away from the film sets for years until sound cinema brought him back. 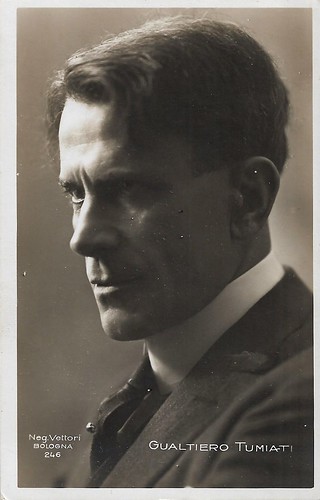 Gualtiero Tumiati (1876–1971) was an Italian stage and screen actor. In 1910 he was a big success on stage in 'Cyrano de Bergerac'. At the outbreak of the First World War, Tumiati devoted himself to shows to entertain the troops. In 1920 the period of his great theatrical works began including 'The Twelfth Night' by William Shakespeare and 'Liliom' by Ferenc Molnár. In 1924, he founded the Sala Azzurra in Milan, one of the first avant-garde theatres. From 1935 on, Tumiati also acted in numerous successful films. 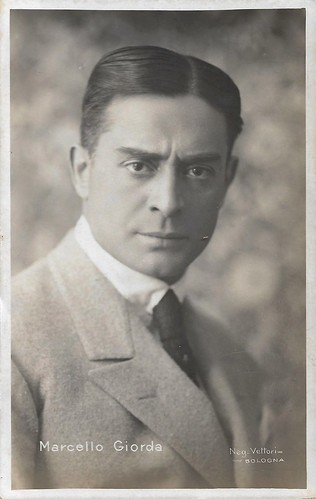 Marcello Giorda (1890-1960) was an Italian stage, film, radio, and TV actor. He made his silent film debut in Turbine rosso (Oreste Gherardini, 1916), That same year, it was followed by Notte di tempesta (Guglielmo Zorzi, 1916) with Italia Almirante Manzini. In 1920 he did two more silent films: Mister Wu (director unknown, 1920), and Il principe idiota (Eugenio Perego, 1920), with Fernanda Fassi, Lamberto Picasso and Paola Borboni. After an absence of over a decade, Giorda returned to the sets in the sound film era. 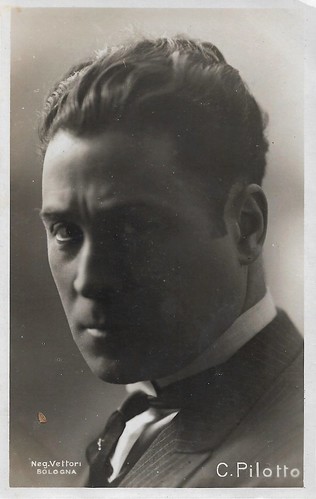 Camillo Pilotto (1888-1963) was an Italian stage and screen actor. Pilotto made his film debut in Il sopravissuto (Augusto Genina, 1916) after which a handful of films followed, among which some directed by Eugenio Perego. In the 1920s Pilotto was hardly visible in the cinema, but his career as a film actor really set off in the 1930s, when the sound film set in. 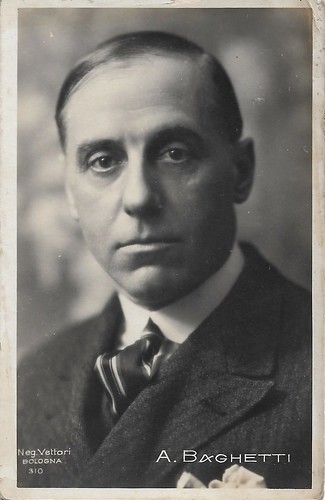 Italian stage and film actor Aristide Baghetti (1874-1955) made his debut in the cinema in 1916 when he was directed by Mario Caserini in L'ombra accanto, starring Vittoria Lepanto. He found his consecration on the screen from 1930 when he took part in Resurrectio by Alessandro Blasetti. Baghetti played posh gentlemen, aristocrats, and butlers in two dozens of films, both light comedies, and melodramas, such as Mille lire al mese (Max Neufeld, 1939), L'onorevole Angelina (Luigi Zampa, 1947) and I figli di nessuno (Raffaele Matarazzo, 1951). Baghetti's last substantial part was in Il sole negli occhi (Antonio Pietrangeli, 1953). 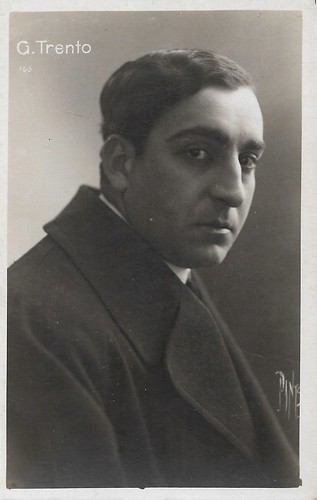 Guido Trento (1892–1957) was an Italian stage and screen actor. In 1919-1921 he acted for Gladiator Film in various films by Gian Paolo Rosmino, Alfredo Masi, Giuseppe De Liguoro etc. In the same years, he also worked at Tiber Film, Chimera Film, and Global. In 1922-1923 he acted at Medusa Film with Helena Makowska in such films as Idillio tragico and Rabagas by Gaston Ravel. Parallel, he acted in two international productions shot in Italy by J. Gordon Edwards, Nero (1922), and The Shepherd King (1923), produced by Fox. Trento's Italian film career ended in 1924 but he continued in the USA at Fox. Trento thus played Police Sergeant Neri in Frank Borzage's Street Angel (1928), starring Janet Gaynor. 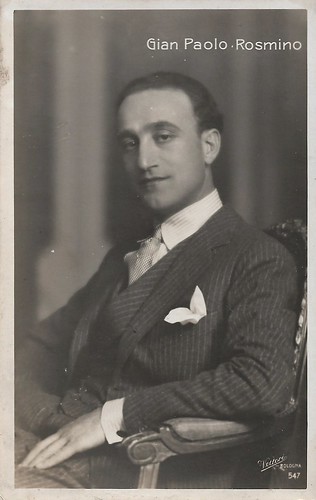 Gian Paolo Rosmino (1888-1982) was an Italian actor, director, and screenwriter. He started his film career first as an actor and shortly after also as a director, in the Turin studios. For the Gloria Film company, he was the slick spy in Lyda Borelli's film debut Ma l'amor mio non muore (Mario Caserini, 1913), and Brittanicus in Nerone e Agrippina (Mario Caserini, 1914). With Leda Gys, his later wife Suzanne Fabre and Maria Caserini, he became one of the Caserini regulars in the mid-1910s, when the latter started his own company and also made some films in Spain. Between 1918 and 1921 Rosmino would also direct a series of 10 films at Gladiator Films, with Helena Makowska and Suzanne Fabre, such as La dame en gris (1919). After 1922 he stopped film acting for years, no doubt due to the collapse of the Italian film industry around 1922-1923. 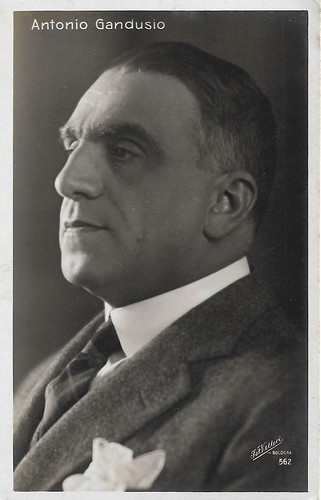 Antonio Gandusio (1873-1951) was an Italian stage and screen actor, who had a rich career in the 1930s and 1940s Italian cinema. He had a supporting part in the silent film Il romanzo di un giovane povero (Amleto Palermi, 1920) starring Pina Menichelli and Luigi Serventi, but Gandusio's film acting career really set off when the sound film had set in. 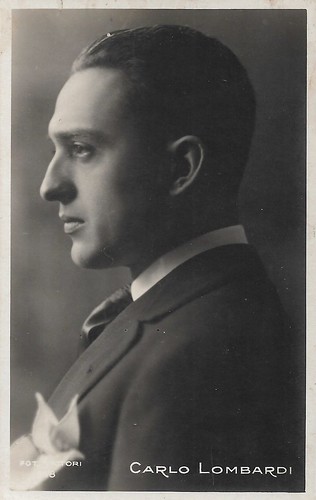 Italian actor Carlo Lombardi (1900-1984) made his debut in theatrical prose as a young actor. In the early twenties, he moved to the stage company directed by Guglielmo Giannini, where he acted alongside Emma Gramatica. Subsequently, he entered as the first actor in the company of Luigi Carini and Antonella Petrucci, then worked with Camillo Pilotto and Kiki Palmer. In 1930 he was hired by Jack Salvatori for the versions of American films in Italian that were being shot at the Paramount studios in Joinville, near Paris. In 1932 Cines offered him a contract for supporting parts in a series of films to be shot in the Rome studios. 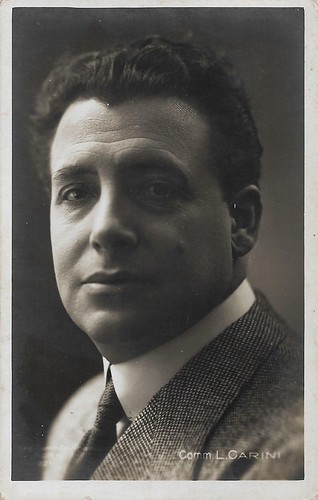 Italian stage and screen actor and company manager Luigi Carini (1869-1943) played in several films since the silent era such as Mario Bonnard's L'amica (1920) with Vittoria Lepanto. In the sound era, Carini was the president of the court in the courtoom drama Corte d'Assise (Guido Brignone, 1931), the writer in Pierpin (Duilio Coletti, 1935), and the aristocratic father of Elisa Cegani in the romantic period piece Cavalleria (Goffredo Alessandrini, 1936). He also acted in two films by Gennaro Righelli, starring Vanna Vanni: Fuochi d'artificio (1938) and Le educande di Saint-Cyr (1939). 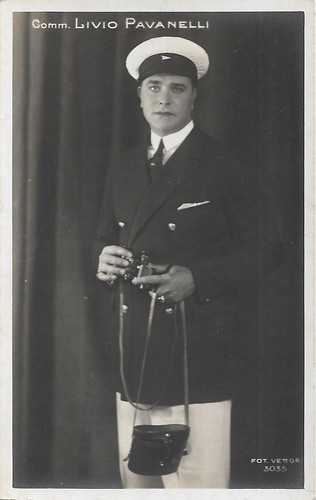 Livio Pavanelli (1881-1958) was a star of the Italian and German silent cinema. He also worked in Italian sound cinema as an actor and as a production manager. He directed four Italian films, both in the silent and the sound era. 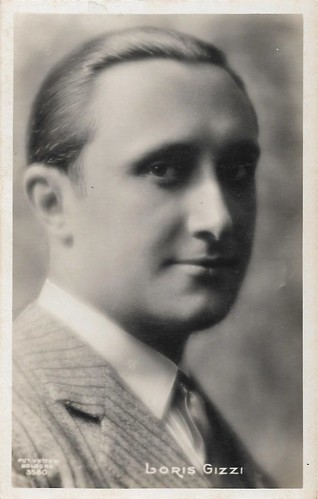 Even if not tall in stature, burly, and certainly not handsome, Italian actor Loris Gizzi (1899-1986) worked a lot in the cinema as a character actor. He made his screen debut in T'amerò sempre (Mario Camerini, 1933) with Elsa De Giorgi, Nino Besozzi, and Mino Doro. Gizzi was immediately noticed for his peaceful and friendly air. Exceptionally, Camerini asked him again for the same role in the remake of ten years later, with Alida Valli, Gino Cervi, and Antonio Centa. For Camerini, he also played the lawyer in Darò un milione (1934), and the captain of the guard in I promessi sposi (1941).