Michael Bohnen (1887-1965) was a German bass-baritone opera singer who performed at Covent Garden, the Bayreuth Festival, and the Metropolitan Opera in New York. He was also popular as a stage and screen actor, but a false testimony against him caused that Bohnen died in poverty. 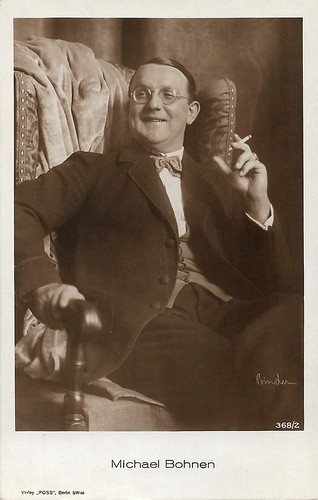 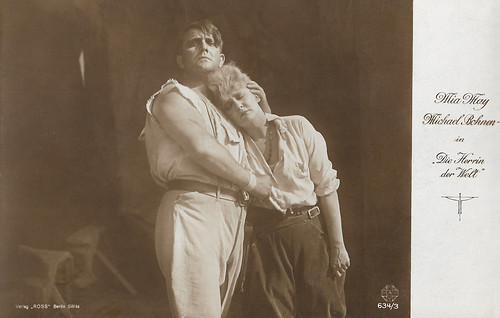 German postcard by Ross Verlag, no. 634/3. Photo: May Film. Mia May as Maud Gregaard and Michael Bohnen as Consul Madsen in Die Herrin der Welt/Mistress of the World (Joe May and others, 1919).

His massive voice and imposing stature


Franz Michael Bohnen was born in Cologne, Germany, in 1887. He trained as an opera singer (bass-baritone) at the Conservatory in Cologne and through private lessons.

He made his debut at the Stadttheater Düsseldorf in 1910 and performed at the Hoftheater Wiesbaden in 1912. Since 1912 he was a member of the Hofoper Berlin, where his star status as an opera singer was confirmed in 1914 when replacing a colleague as Gurnemanz in Wagner's 'Parsifal'.

In 1914 he also made an impression in Wagner operas at Covent Garden and the Bayreuth Festival. He was called to military service but after an illness in 1916, he could continue at the Berlin Hofoper.

When Richard Strauss, interim at the Hofoper, moved to Berlin, Bohnen joined him and successfully sang the part of Baron Ochs von Lerchenau in Strauss' 'Rosenkavalier', a part he would later repeat in the film version Der Rosenkavalier (Robert Wiene, 1925-1926), starring Huguette Duflos as the Marschallin.

Bohnen often performed at the Metropolitan Opera in New York from 1922 to 1933, and from 1933 to 1934 he made guest appearances in Buenos Aires. His massive voice and imposing stature impressed many. 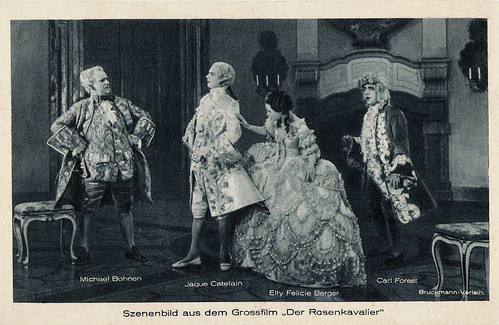 Then he had a major part as he-man and love interest of Mia May in the first five episodes of Die Herrin der Welt/Mistress of the World (Joe May and several others, 1919-1920), which gave him his breakthrough.

He temporarily owned his own film company, Bohnen-Film GmbH (1920–1922), although most titles are forgotten films now, such as Präsident Barrada/President Barrada (Erik Lund, 1920).

In 1922 he acted in the opera adaptation Tiefland/Lowlands (Adolf Licho, 1922) while in 1926 he acted opposite Ellen Richter in Kopf hoch, Charly/Heads Up, Charley (Ludwig Wolff, 1926).

His muscle strength, which he already displayed as the bare-chested savior in Die Herrin der Welt, became legendary. His colleague Lil Dagover describes in her autobiography how, among other things, he fought a living bull and he held a boy out of the window with outstretched arms in August der Starke. 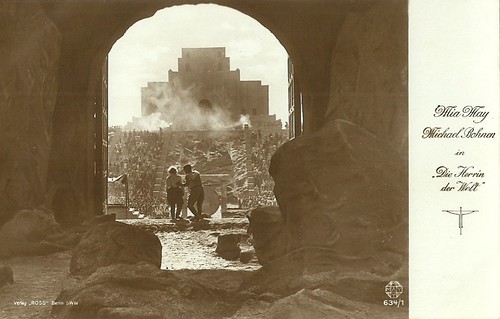 German postcard by Ross Verlag, no. 634/1. Photo: May Film. Mia May and Michael Bohnen in Die Herrin der Welt/Mistress of the World (Joe May and others, 1919). Maug Gregaard (Mia May) and Consul Madsen (Michael Bohnen) at Ophir, the City of the Past. 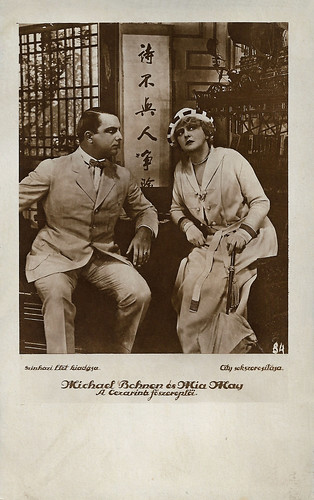 Hungarian postcard, no. 84. Photo: Színházi Élet Kiadási / City Sokszorositása. Michael Bohnen and Mia May in Herrin der Welt/Mistress of the World (Joe May, 1919-1920).


In 1934, Michael Bohnen had returned to Berlin after his foreign tours, initially sang again at the State Opera, and from 1935 to 1945 at the Deutsche Oper.

During the war years, Bohnen also had major film parts e.g. as a factory manager suffering from foreign spies in Achtung! Feind hört mit! (Arthur Maria Rabenalt, 1940), as the Austrian Emperor in Der liebe Augustin/Beloved Augustin (E.W. Emo, 1940), and as Duke Karl von Braunschweig in Münchhausen (Josef von Baky, 1942/43) starring Hans Albers - even if the scene with him was cut on orders of Goebbels.

IMDb writes that when Bohnen refused to play in propaganda films he was confronted with a fateful consequence. His son Wolfgang, who was a priest, was called up as a front priest to put Michael Bohnen under pressure. Wolfgang Bohnen was killed in the Caucasus two years later; a bad blow for Michael Bohnen.

After the end of the Second World War he was director of the Deutsche Oper until 1947, and president of the Chamber of Artists. As a result of the denazification process, he had to give up the post at the Deutsche Oper because of a deliberate false testimony from his student, the tenor Hans Beirer. Bohnen, named the 'German Chaliapin, stopped singing in 1951.

The tenor's lie was soon proven, but Michael Bohnen's rehabilitation took place only hesitantly. He won the Goethe award in 1952 and  the award of the 'Grosses Verdienstkreuz des Verdienstordens der Bundesrepublik Deutschland' in 1957. However, Bohnen was only provided with a small salary from the city of Berlin and lived in complete poverty at the time of his death.

Michael Bohnen was first married to Maria Greven (1913-1926), from which he had two sons. His second marriage was with American soprano and beauty queen Mary Lewis (1927-1933). They separated after three years, the divorce followed three years after. After that, Bohnen had a serious affair with La Jana, as the long correspondence between them proves, but by 1939/1940 they broke up. In 1953 he married for the third time, with draughtswoman and fan Ingeborg Behrend, but they separated in 1963.

In 1965 Michael Bohnen died in his home in Berlin, due to heart failure. He was 77. Bohnen is buried in the Friedhof Heerstraße in Berlin-Westend. 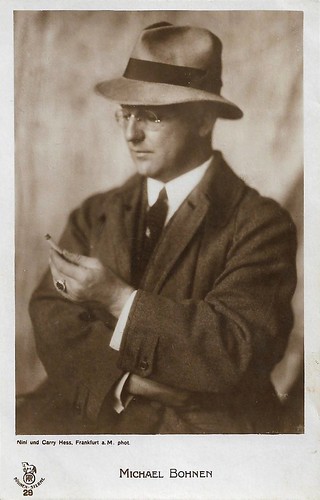 German postcard by Rotophot in the Bühnen-Sterne Series, no. 29. Photo: Nini and Carry Hess, Frankfurt am Main. 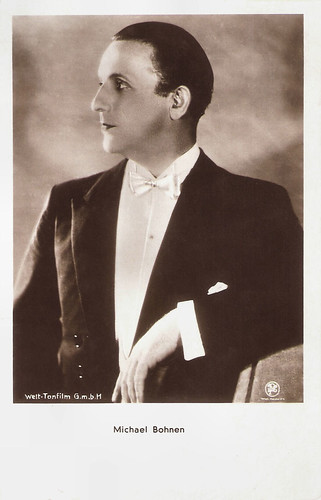 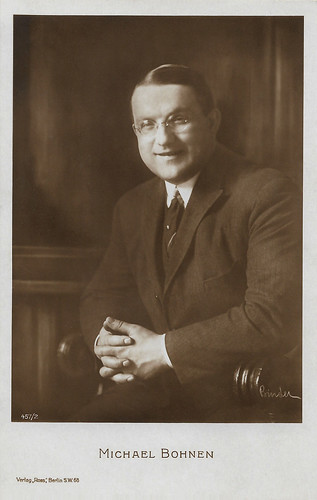