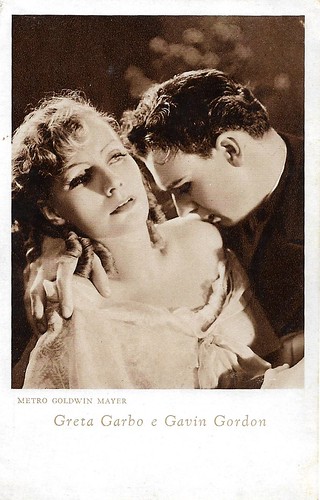 Italian postcard by Cinema-Illustrazione, Milano, Series 2, no. 1. Photo: Metro-Goldwyn-Mayer. Greta Garbo and Gavin Gordon in the early sound film Romance (Clarence Brown, 1930). It was also issued as a silent film. 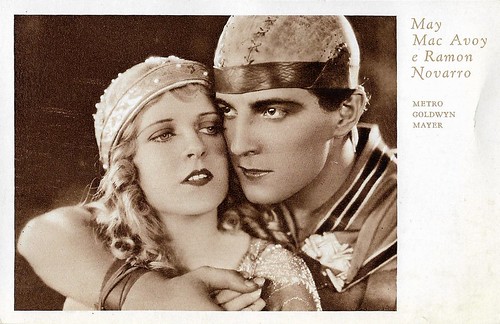 May McAvoy (1899-1984), also written as MacAvoy and Mac Avoy, was an American actress of the silent screen, best known as Esther in the classic epic Ben-Hur (Fred Niblo, 1925). 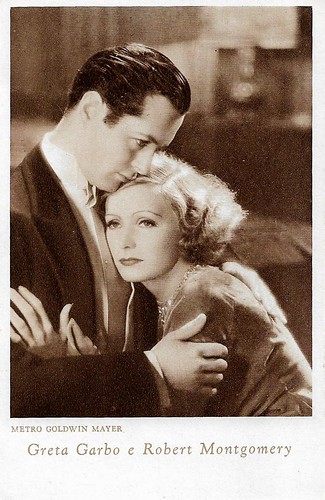 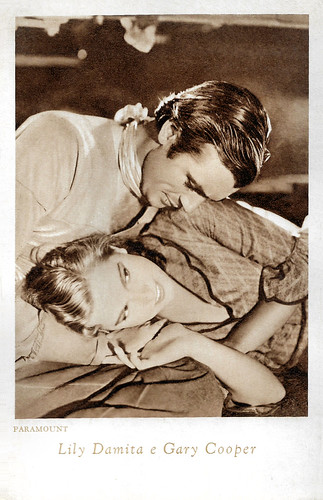 Beautiful and seductive French actress Lily Damita (1902-1994) appeared in 33 French, Austrian, and Hollywood films between 1922 and 1937. Her marriage with Errol Flynn was rather tempestuous and led to her nickname 'Dynamita'.

American screen legend Gary Cooper (1901-1961) is well remembered for his stoic, understated acting style in more than one hundred Westerns, comedies and dramas. He received five Oscar nominations and won twice for his roles as Alvin York in Sergeant York (1941) and as Will Kane in High Noon (1952). 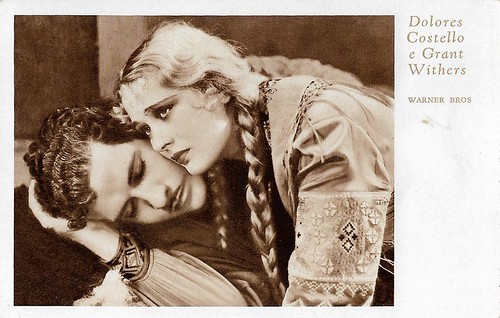 American film actress Dolores Costello (1903-1979) was 'The Goddess of the Silent Screen'. She was Hollywood royalty: the daughter of popular matinee idol Maurice Costello, wife of John Barrymore, and grandmother of Drew Barrymore. 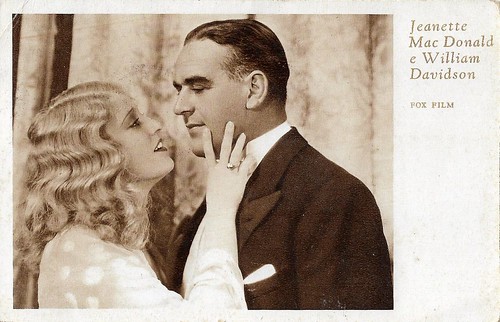 Red-headed and blue-green-eyed operatic singer Jeanette MacDonald (1903-1965) was discovered for the cinema by Ernst Lubitsch, who cast her opposite Maurice Chevalier in The Love Parade (1929). Later 'the Iron Butterfly' co-starred with Nelson Eddy in a string of successful musicals and played opposite Clark Gable in San Francisco (1936).

Joan Crawford's (1905-1977) Hollywood career spanned many decades, studios, and controversies. In her silent films, she made an impact as a vivacious Jazz Age flapper and later she matured into a star of psychological melodramas. 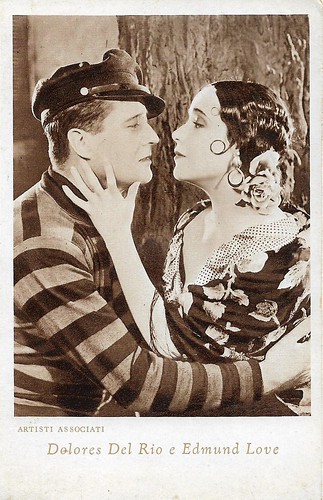 Mexican and American actress Dolores del Río (1905–1983) was a Hollywood star in the 1920s and 1930s, and one of the most important female actresses of the Golden Age of Mexican cinema in the 1940s and 1950s. Del Río was the first major Latin cross-over star in Hollywood and was considered one of the most beautiful faces that have emerged in Hollywood cinema. She also appeared in several European films.

Edmund Lowe (1890-1971) was an American actor of silent and sound cinema, best known for his parts in Raul Walsh's WWI drama What Price Glory (1926) in which he rivals with Victor McLaglen over the love of Dolores del Rio, in the bittersweet comedy Dinner at Eight (George Cukor, 1933) in which Lowe has an affair with Jean Harlow, and in Dillinger (Max Nosseck, 1945). From 1915 to 1960 he starred in some 100 films. 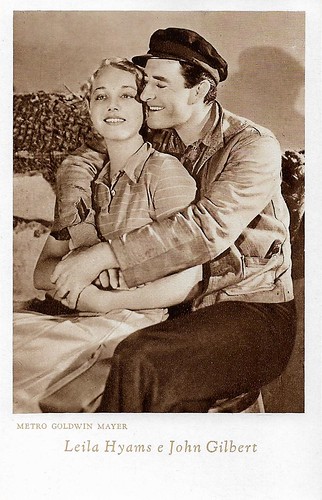 American actor, screenwriter, and director John Gilbert (1899-1936) rose to fame during the silent film era and became a popular leading man known as 'The Great Lover'.

Charming American model, vaudeville, and film actress Leila Hyams (1905-1977) was one of Hollywood's top leading ladies of the early talkie pre-code years. She had spark, personality, and charisma, and a touch of down-to-earthiness and naturalness that won over movie fans; they could relate to her. She is best known for her roles in the classic horror features Freaks (1932) and Island of Lost Souls (1932). Her career lasted little more than a decade. 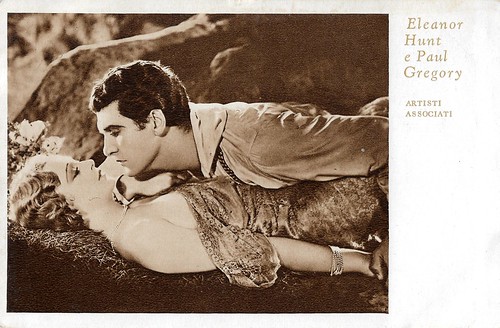 Italian postcard by Cinema-Illustrazione, series 2, no. 21. Photo: United Artists. Eleanor Hunt (1910-1981) and Paul Gregory (1904-1942) in a romantic scene from the film Whoopee (1930), an early sound musical directed by Thornton Freeland and produced by Sam Goldwyn Studios. 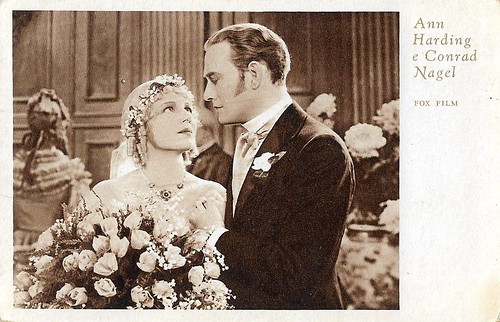 Ann Harding (1902–1981) was an American film actress. She was signed by Pathe and made her debut in Paris Bound (1929), with Fredric March. She became a leading lady, and the roles that she played were always the same, but her co-stars changed. She was the gentle, refined heroine as in The Animal Kingdom (1932), wherein she played Daisy, the rejected fiancée of Leslie Howard. 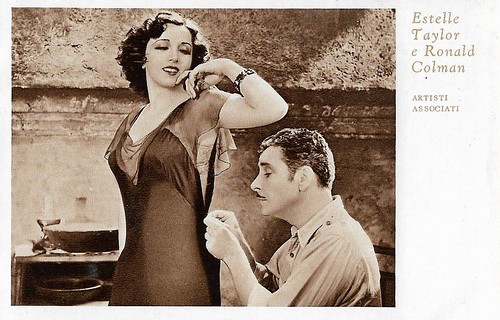 English gentleman-actor Ronald Colman (1891-1958) was a top box office draw in Hollywood films throughout the 1920s, 1930s, and 1940s. ‘The man with the velvet voice’ was nominated for four Academy Awards. In 1948 he finally won the Oscar for his splendid portrayal of a tormented actor in A Double Life.

Estelle Taylor (1894-1958) was an American actress, singer, model, and animal rights activist. With "dark-brown, almost black hair, and brown eyes," she was regarded as one of the most beautiful silent film stars of the 1920s. After her stage debut in 1919, Taylor began appearing in small roles in World and Vitagraph films. She achieved her first notable success with While New York Sleeps (1920). She was a contract player of Fox and later Paramount, but for the most part of her career, she freelanced. She became famous and was commended by critics for her portrayals of historical women in important films: Moses' sister Miriam in The Ten Commandments (1923) starring Theodore Roberts, Mary, Queen of Scots in Dorothy Vernon of Haddon Hall (1924) starring Mary Pickford, and Lucrezia Borgia in Don Juan (1926) starring John Barrymore. Although she made a successful transition to sound films, she retired from film acting in 1932 and decided to focus entirely on her singing career. She was also active in animal welfare before her death from cancer in 1958. 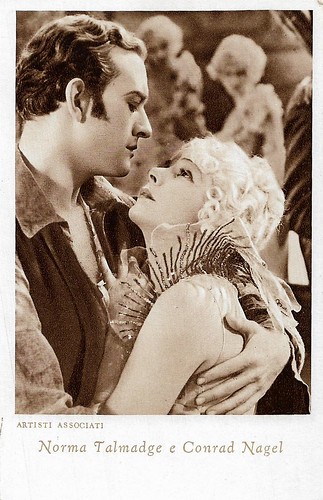 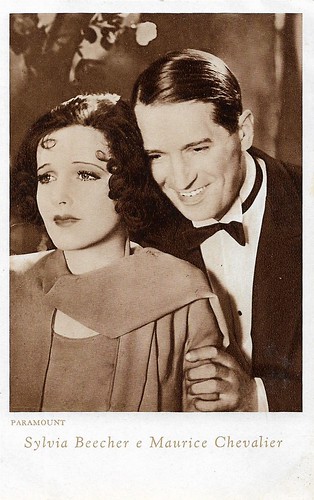 Maurice Chevalier (1888-1972) was a French actor, singer, and entertainer. His trademark was a casual straw hat, which he always wore on stage with a cane and a tuxedo. 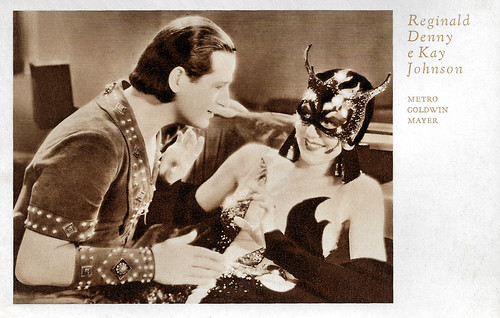 Kay Johnson, originally Catherine Townsend Johnson (1904-1975), was an American stage and screen actress, who peaked on screen in the early 1930s.

English stage, film, and television actor Reginald Denny (1891-1967) was also an aviator and a pioneer in the field of radio-controlled, pilotless aviation. He appeared in more than 200 films, both in Great Britain and in the United States, first as a lead in silent films and later as a character actor in sound films and TV productions. 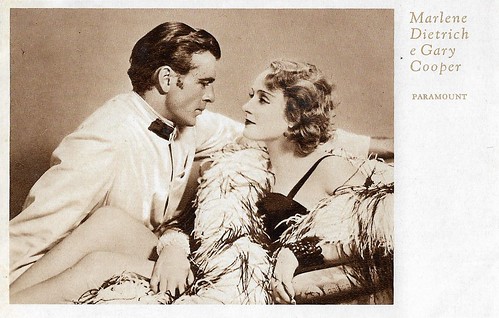 Marlene Dietrich (1901-1992) is regarded as the first German actress to become successful in Hollywood. Throughout her long career, she constantly re-invented herself, starting as a cabaret singer, chorus girl, and film actress in 1920s Berlin, she became a Hollywood movie star in the 1930s, a World War II frontline entertainer, and finally an international stage show performer from the 1950s to the 1970s, eventually becoming one of the entertainment icons of the 20th century. 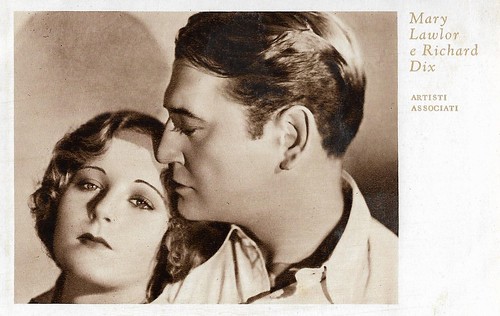 American film actor Richard Dix (1893–1949) achieved popularity in both silent and sound film, first as the rugged and stalwart hero in countless Westerns, then dramatic features such as Cecil B. DeMille's The Ten Commandments (1923). After his years of silent film at Paramount, and thanks to his deep voice and commanding presence, he became a well-known star at RKO in the 1930s. He was nominated for the Academy Award for Best Actor for his lead role in the Best Picture-winning epic, Cimarron (1931). 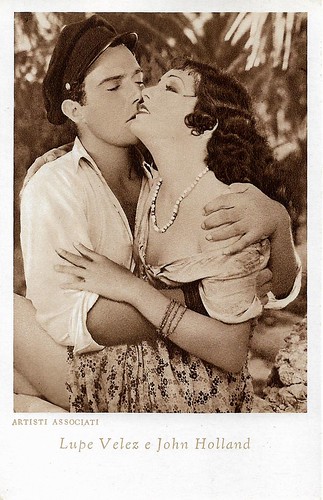 Lupe Velez (1908-1944), was one of the first Mexican actresses to succeed in Hollywood. Her nicknames were 'The Mexican Spitfire' and 'Hot Pepper'. She was the leading lady in such silent films as The Gaucho (1927), Lady of the Pavements (1928), and Wolf Song (1929). During the 1930s, her well-known explosive screen persona was exploited in a series of successful films like Hot Pepper (1933), Strictly Dynamite (1934), and Hollywood Party (1934). In the 1940s, Vélez's popularity peaked after appearing in the Mexican Spitfire films, a series created to capitalise on Vélez's well-documented fiery personality. She had several highly publicised romances and a stormy marriage. In 1944, Vélez died of an intentional overdose of the barbiturate drug Seconal. Her death and the circumstances surrounding it have been the subject of speculation and controversy. 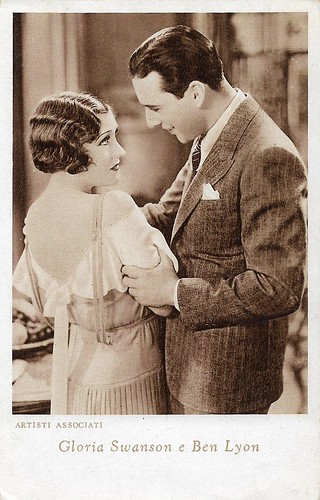 Italian postcard by Cinema-Illustrazione, series 2, no. 35. United Artists. Gloria Swanson and Ben Lyon in Indiscreet (Leo McCarey, 1931). The film was remade in 1958 with Ingrid Bergman and Cary Grant.

Gloria Swanson (1899-1983) was one of the biggest Hollywood stars of the silent era. She transformed from a typical Mack Sennett comedienne into a lively, provocative, even predatory, star in films by Cecil B. De Mille. She received Oscar nominations for Sadie Thompson (1928), The Trespasser (1929), and Sunset Blvd. (1950). 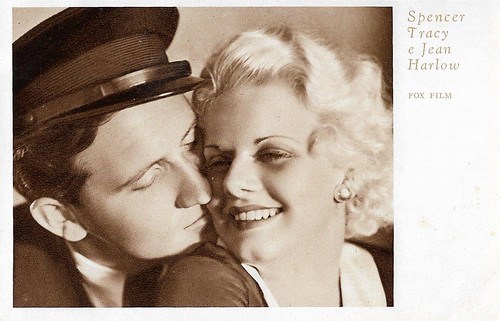 Italian postcard by Cinema-Illustrazione, series 2, no. 36. Spencer Tracy and Jean Harlow in Goldie (Benjamin Stoloff, 1931), a remake of Howard Hawks' silent film A Girl in Every Port (1928).

American film actress Jean Harlow (1911–1937) was one of the sex symbols of the 1930s. With her come-hither body, platinum blonde hair, and a keen sense of humour, she had her breakthrough in Howard Hughes' World War I epic Hell's Angels (1930). Frank Capra's Platinum Blonde (1931) cemented her role as America's new sex symbol. In 1932, she signed with Metro-Goldwyn-Mayer and became the leading lady in a string of hit films. These included Red Dust (1932), Dinner at Eight (1933), Reckless (1935), and Suzy (1936). Among her frequent co-stars were William Powell, Spencer Tracy, and, in six films, Clark Gable.

American actor Spencer Tracy (1900-1967) was one of the major stars of Hollywood's Golden Age. He was the first actor to win back-to-back Oscars for Captains Courageous (1937) with Freddie Bartholomew, and for playing Father Edward Flanagan in Boys Town (1938) with Mickey Rooney. Considered by his peers as one of the best Hollywood actors, Tracy was noted for his natural performing style and versatility. 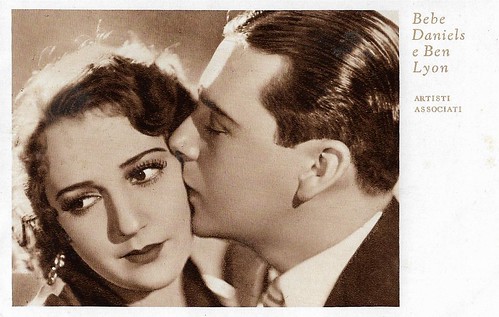 Bebe Daniels (1901-1971) began her career in Hollywood during the silent film era as a child actress. She later became the love interest of Harold Lloyd in dozens of short comedies. Cecil B. de Mille made her a silent star and later she sang and danced in early musicals like Rio Rita (1929) and 42nd Street (1933). In Great Britain, she gained further fame on stage, radio, and television. In her long career, Bebe Daniels appeared in 230 films.