For the new issue of the international magazine The Italianist, film historian Ivo Blom wrote an article on the production of the film Tosca (1941), a curious and intriguing case in film history. It was originally begun by French director Jean Renoir, but finished by his German screenwriter-turned-director Carl Koch. Koch’s wife Lotte Reiniger and the young Luchino Visconti contributed to the film, while its producer was the grand old man of Italian silent film, Arturo Ambrosio. But the leading role of Tosca was played by only one person, the enigmatic Imperio Argentina (1906-2003). Although the famous actress and singer was born in Buenos Aires, Argentina, was successful all over South America and worked in Spain, France, Italy and Germany, she was a Spanish citizen. 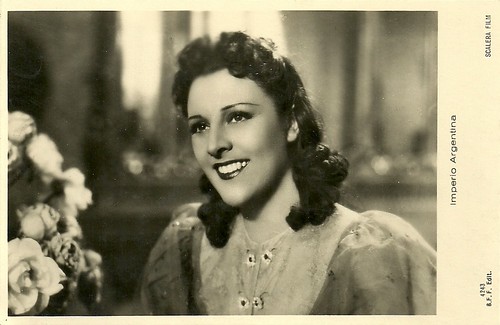 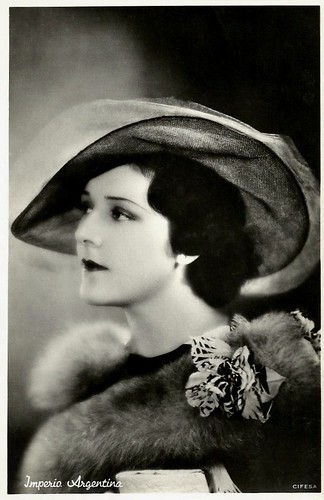 Until the age of 12 she lived in Malaga, where she studied dance. Thanks to Pastora Imperio, she debuted at the age of 12 at the comedy theatre of Buenos Aires. Imperio called her 'Petite Imperio', her artistic name in those years, when she was successful all over South America.

When she came back to Spain in 1926, she adopted the artistic name of Imperio Argentina, singing in the main theatres of the country. Film director Florián Rey discovered her at the Romea theatre in Madrid and enabled her to play in the silent film La Hermana San Sulpicio/Sister San Sulpicio (Florián Rey, 1927).

Eventually she also married Rey, who was the first of her three husbands. In Spain and Germany, Argentina performed in the late silent Corazones sin rumbo/Herzen ohne Ziel/Hearts Without Soul (Benito Perojo, Gustav Ucicky, 1928), which costarred Betty Bird and Livio Pavanelli.

At Paramount she worked with Carlos Gardel in the short La casa es seria/Love Me Tonight (Lucien Jacquelux, 1931), which is considered as lost, and Melodía de Arrabal/Suburban Melody (Louis Gasnier, 1932), singing rare duets with him.

Adolf Hitler asked her to play in a film about Lola Montes, which she declined but instead she played in both the Spanish and the German version of Carmen, la de Triana/Andalusische Nächte (Florian Rey, Herbert Maisch, 1938), shot around Malaga. In the German version Friedrich Benfer (a.k.a. Enrico Benfer) costarred as Don José, while in the Spanish version Rafael Rivelles played this part.

Imperio Argentina is said to have had an affair with Rafael Rivelles before she had divorced her second husband Ramón Baillío. Her divorce caused a scanald, as she was married for the Catholic church. 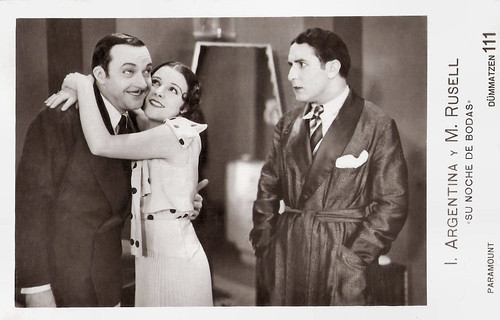 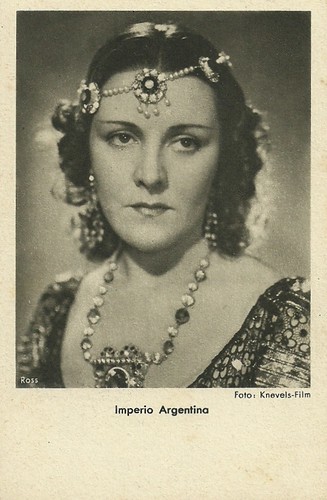 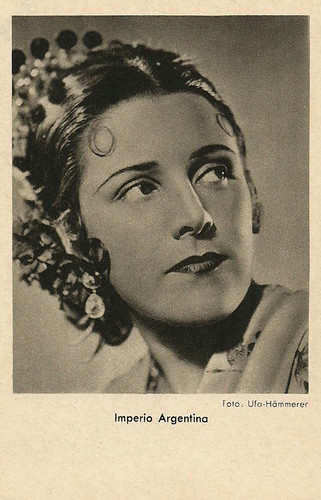 
In 1940 Imperio Argentina travelled to Rome to star opposite Rossano Brazzi in Tosca/The Story of Tosca (Carlo a.k.a. Carl Koch, 1941), an adaptation of the story by Victorien Sardou. The film was originally directed by Jean Renoir, but when war between France and Italy was at hand and Renoir was knocked down by fascists one day, he fled to France and his assistant Carl Koch took over directing.

In his memoirs, Michel Simon, who played her antagonist Scarpia in the film, recalls how he rehearsed the rape scene of Tosca too vividly, unveiling one of her breasts. Fascinated, he tried the same the next day, but Imperio had taken measures, firmly tying up her robe.

The film was partly shot on location, at the Castel Sant’Angelo, the Palatine Hill and in front of the Palazzo Farnese (the French embassy). A young Luchino Visconti collaborated as a first assistant and learned the tricks of the trade here.

In the 1950s she focused on big musical shows while in the 1960s she did Ama Rosa (León Klimovsky, 1960) and Con el viento Solano/With the East Wind (Mario Camus, 1966) as the mother of Antonio Gades. After years of little activity she was rediscovered at Festival Internacional de Cine in San Sebastián. From then on a new golden age started, full of honors.

Argentina became a citizen of Spain in 1999. In the following decades, she appeared in Tata Mía/Dear Nanny (José Luis Borau, 1986) opposite Carmen Maura and in El polizón de Ulises/The stowaway of the Ulises (Javier Aguirre, 1987), her last film. She also performed in the stage play of the Expo 92, Azabache.

In 1996 she was elected 'pregonera' at the Festa del Pilar at Saragozza, to celebrate the centenary of the cinema. In 2001 she published her memoirs, Malena Clara, written by Pedro Villora.

At the age of 92, Imperio Argentina died of natural causes in 2003 in her house in Torremolinos in Andalucia. She lies buried nearby at Benalmádena near Málaga. In 2011 she was honoured with a star in the Spanish Walk of Fame, the Paseo de la Fama in Madrid. In 1994 she already was honoured as 'Ciudadano Ilustre de la Ciudad de Buenos Aires' (Illustrious Citizen of the City of Buenos Aires).