The Pisorno Studios in Tirrenia

The Tirrenia Studios or in Italian 'Tirrenia, Stabilimenti cinematografici', also known at one point as the Pisorno Studios, is a film studio complex located in the Italian coastal town of Tirrenia in Tuscany. The studios, constructed in 1933-1934, were intended, along with the Fert Studios in Turin, to provide northern competition to the increasingly dominant Cines Studios in Rome. Like Latina, Littoria, and Pontinia, Tirrenia was a new town that had grown with the support of Italy's Fascist regime. Italian film production was booming following an early 1930s slump, but Tirrenia quickly faced increasing competition from the large Cinecitta studios in Rome which were opened in 1937 as part of the Fascist's attempt to centralise film production in the capital. The Roman Scalera studios (1938) added to this competition. Nonetheless, the Pisorno studios continued to be used, sometimes facilitating location shooting nearby. 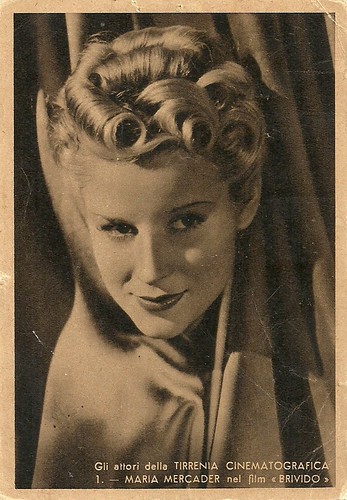 María Mercader (1918-2011) was a Spanish actress who acted in Spanish and Italian films, largely between 1939 and 1952. She was the second wife of Vittorio De Sica and mother of Christian and Manuel De Sica. 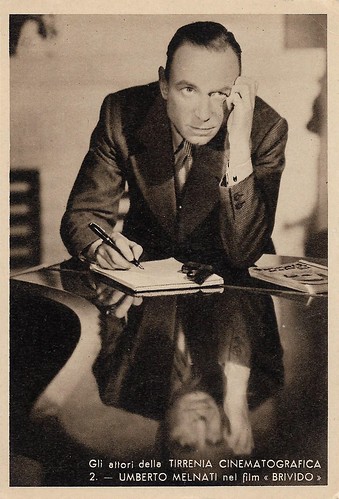 Though he also had various parts in dramas and precursors of the Giallo, Umberto Melnati (1897-1979) is mostly known for his screen comedies, in particular, the 'Telefoni Bianchi' comedies of the 1930s and 1940s. In these films, he often acted with Vittorio De Sica (Due cuori felici, Il signor Max, etc.), Alida Valli (Mille lire al mese), and others. Before, he had longtime acted on stage with De Sica and Checco Rissone. After the war, Melnati acted e.g. the lead in La valigia dei sogni (1953) by Luigi Comencini. 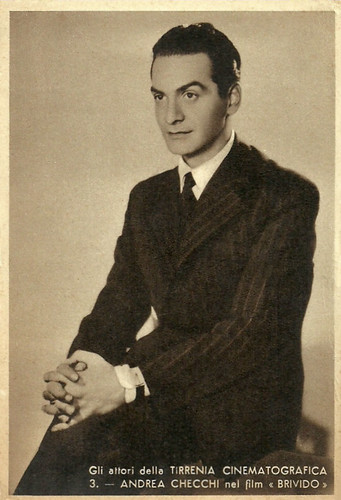 Andrea Checchi (1916-1974) was a prolific Italian film and television actor, who peaked in the early 1940s as a leading actor, while he had important supporting parts in post-war Neorealism and beyond.

The start of Mario Monicelli and the Tavianis


Initiators of the Tirrenia Studios were Giovanni and Edoardo Agnelli, grandfather and father of the more famous Gianni Agnelli (FIAT), together with director-producer-playwright Giovacchino Forzano. Forzano had made his claim with a blatant fascist propaganda film, Camicia nera (1933).

Sources differ what his first film at Pisorno was, some say Camicia nera, others claim it is Campo di maggio (1934), also shot in a German version. Afterward followed Forzano's Fiordalisi d’oro (1936), with Fosco Giachetti and Marie Bell, also shot in a French version by Forzano and Marc Cravenne as Sous la terreur, Colpo di vento (1936), with Ermete Zacconi and Dria Paola.

After that Forzano did films based on original scripts: Sei bambini ed il Perseo (1940), with Elena Zareschi and Augusto Di Giovanni, and Il re d’Inghilterra non paga (1941), with Silvana Jachino and Andrea Checchi. His last film, Piazza di San Sepolcro (1943), with Vivi Gioi and Rossano Brazzi, was never released.

Mario Zampi, who had produced Forzano's WWI drama Tredici uomini e un cannone in 1936, two years after he also directed at Pisorno an all British version of this, 13 Men and a Gun (1938). It was his calling card to the British film industry, where he was particularly active as a producer and director in the late 1940s to early 1960s.

Thanks to a friendship with Forzano's son, future director Mario Monicelli started his career at Pisorno, while the Taviani brothers knew the studio in their youth as well. Meanwhile, other directors worked too at the vast territory of the Tirrenia studios, which offered all the necessary modern equipment. 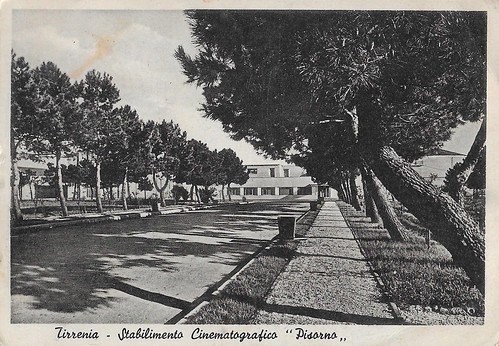 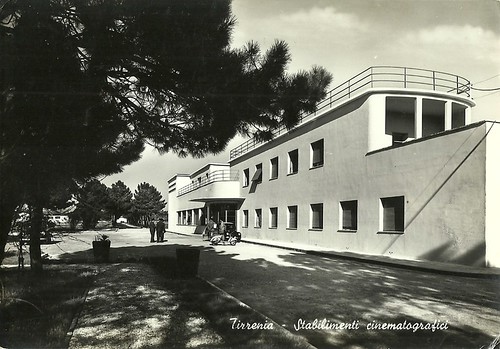 Italian postcard by Alterocca, Terni / Ed. Tabacchi Torelli, no. 20881. The Pisorno film studios at Tirrenia, between Livorno and Pisa.

Carlo Ponti and his Cosmopolitan


During the later stages of the Second World War, the Tirrenia Studios were requisitioned for other use first by the Germans and later by the Allies.

In the post-war years, the studios returned to film production, although this has been sporadic. Forzano's son, Andrea Forzano, meanwhile had taken over the studio and made a few films there himself, such as Imbarco a mezzanotte (1952), with Paul Muni and Luisa Rossi.

In the 1960s the producer Carlo Ponti took over the studios with his company Cosmopolitan. His first film there was Madame Sans-Gêne (Christian Jaque, 1961), with Sophia Loren and Robert Hossein.

Still, film production became scarce at the Tirrenia studios. Ponti preferred other studios and thought the studio was too expensive, so by the late 1960s, the complex closed down.

Despite attempts to turn it into TV studios of the RAI, a tourist resort, or a sports center, nothing came of the ideas. The Taviani brothers made a tribute to the studios in their film Good Morning Babilonia (1987). In 2016 an exhibition on the Tirrenia Studios was made in Pisa, at Palazzo Blu. All in all some 160 films were made at the Tirrenia studios, the last one being L'assoluto naturale (1969) by Mauro Bolognini. 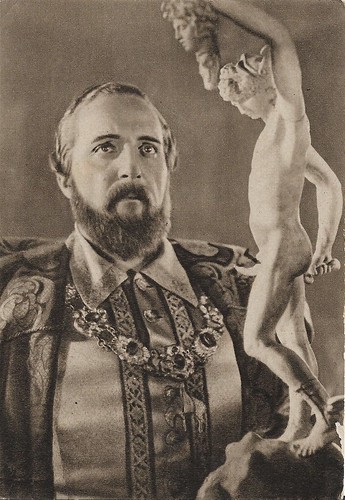 Italian postcard. Postcard for Sei bambine ed il Perseo (Giovacchino Forzano, 1939), shot at the Pisorno studios at Tirrenia and based on the life of Benvenuto Cellini. Produced by Pisorno Cinematografica and distributed by S.A. Cinematografica Tirrenia. The actor depicted here may be Manlio Mannozzi, who plays Cosimo De' Medici. He wears the Order of the Golden Fleece, which Cosimo De' Medici obtained in 1546. 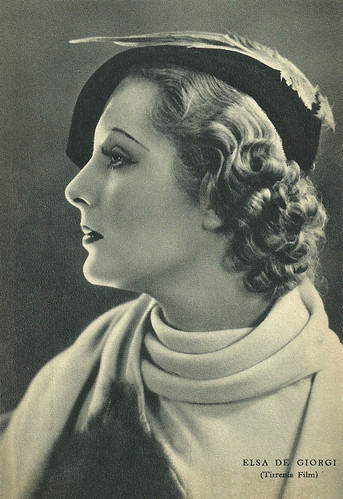 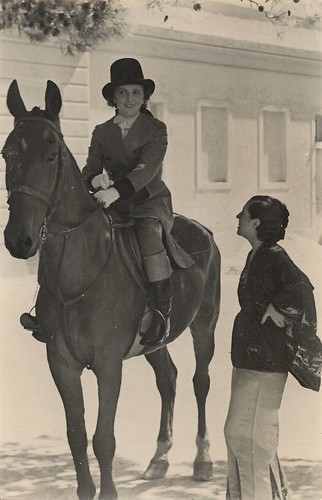 Vintage photo-postcard. Marie Bell horse riding while acting at the Pisorno film studios at Tirrenia, near Livorno. August 1935. The photo may have been taken during the shooting of the multi-version film Sous la terreur/Fiordalisi d'oro, shot in 1935-1936 at the Tirrenia studios. The Italian version was shot by Giovacchino Forzano, the French one by Marc Cravenne and Forzano.