Foulsham & Banfield was a British photographic portrait studio, which was active between the 1900s and the 1920s. The studio was first located in Wigmore Street and later in Old Bond Street, London. The two photographers were Frank Foulsham (1873-1930) and Arthur Clive Banfield (1875-1965). They marketed themselves as specialists in glossy pictures of so-called matinée idols of the West End theatre. We selected 20 postcards with these pictures of stage idols, published by Rotary, and also later pictures of film stars, published in the Picturegoer Series. 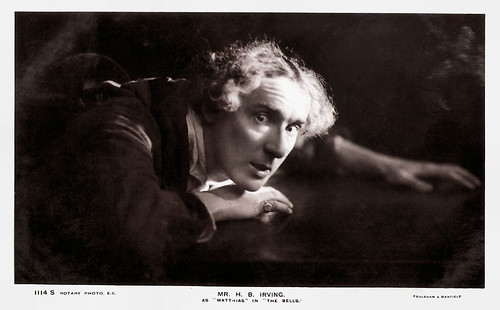 British postcard by Rotary Photo, no. 1114 S. Photo: Foulsham & Banfield. Photo: publicity still for the stage production of 'The Bells' (ca. 1905) with H.B. Irving as Matthias.

H.B. Irving (1870-1919) was a British stage actor and actor-manager. He was the eldest son of Sir Henry Irving. Despite his many roles on stage and in the silent cinema, Irving is now best known for 'A Book of Remarkable Criminals' (1918), which he wrote as a legal expert. 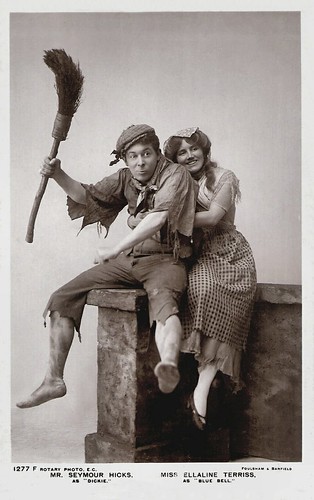 British postcard by Rotary, no. 1277 F. Photo: Foulsham & Banfield. Seymour Hicks as Dickie and Ellaline Terriss as Blue Bell in the play 'Bluebell in Fairyland' (1901).

Suave Seymour Hicks (1871-1949) was a successful British actor, music hall performer, playwright, screenwriter, actor-manager and producer. He became known, early in his career, for writing, starring in and producing several Edwardian musical comedies, often together with his famous wife, Ellaline Terriss. His most popular role was that of Ebenezer Scrooge in Charles Dickens's A Christmas Carol. He repeated this role on screen in a silent and in a sound version. 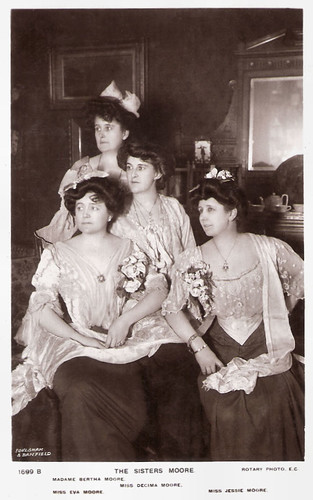 English actress Eva Moore (1870–1955) had a career on stage and in the cinema which spanned six decades. She was active in the women's suffrage movement, and from 1920 on she appeared in over two dozen films. 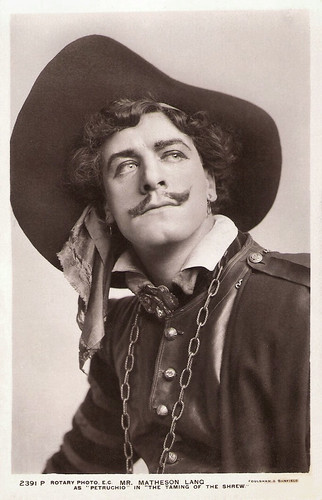 British postcard by Rotary, no. 2391 P. Photo: Foulsham & Banfield. Matheson Lang as Petruchio in the play 'The Taming of the Shrew'.

Tall and good-looking Matheson Lang (1879-1948) was a Canadian-born stage and film actor and playwright in the early 20th century. He is best known for his Shakespearean roles in British productions of 'Hamlet', 'Macbeth', and 'Romeo and Juliet' and for his role as Mr. Wu. He was one of the first major stars of the British theatre who acted in a silent film and during the 1920s, he became a popular film star in Great Britain. 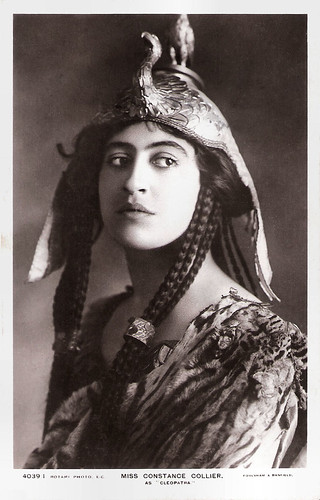 British postcard by Rotary Photo, no. 4039 I. Photo: Foulsham & Banfield. Publicity still for the stage production 'Antony and Cleopatra' (1906) with Constance Collier as Cleopatra. 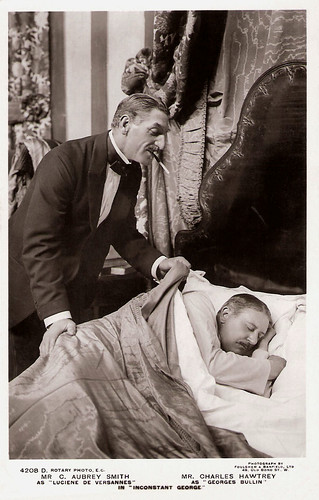 British postcard in the Rotary Photographic Series, no. 4208D. Photo: Foulsham & Banfield, London. Publicity still for the play 'Inconstant George' with Charles Hawtrey as Georges Bullin and C. Aubrey Smith as Luciene de Versannes. The play written by Gladys B. Unger and directed by Charles Hawtrey was performed during the 1910-1911 season at the Prince of Wales Theatre in London.

C. Aubrey Smith (1863–1948) was an English cricketer and actor, who started his film career in the British silent cinema. He went to Hollywood where he had a successful career as a character actor playing stereotypical Englishmen with a stiff upper lip and a stern determination. His bushy eyebrows, beady eyes, and handlebar moustache made him one of the most recognisable faces of the cinema. 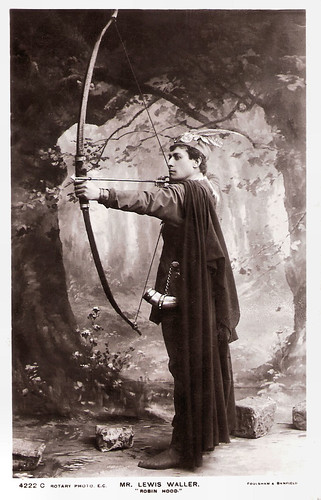 Lewis Waller (1860-1915) was best known as a matinee-idol in the popular romantic plays of his day. He also worked as a playwriter and a stage manager and appeared in several films. 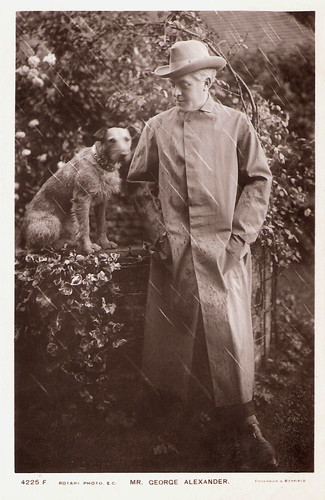 British postcard by Rotary, no. 4225 F. Photo: Foulsham and Banfield.

Sir George Alexander (1858-1918) was an English actor and theatre manager, who produced and starred in Oscar Wilde's plays 'Lady Windermere's Fan' and 'The Importance of Being Ernest'. He also acted in two silent films and is the great, great uncle of Hugh Laurie. 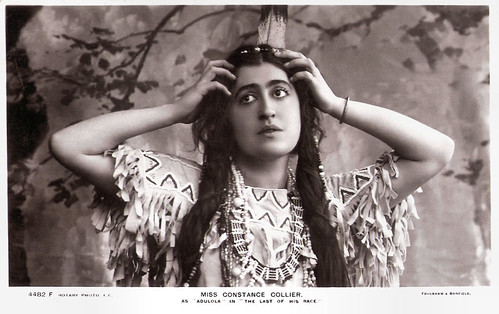 British postcard by Rotary Photo, no. 4482 F. Photo: Foulsham & Banfield. Publicity still for the stage production The Last of His Race (1907) with Constance Collier as Adulola. 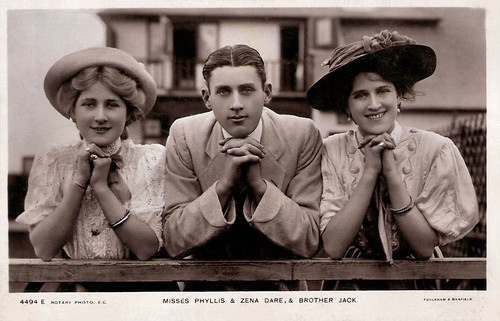 English singer and actress Phyllis Dare (1890-1975) was famous for her performances in Edwardian musical comedy and other musical theatre in the first half of the 20th century. She appeared occasionally in films and was one of the leading Picture Postcard beauties of the Belle Epoque. English singer and actress Zena Dare (1887–1975) was famous for her charming, graceful and vivacious performances in Edwardian musicals and comedies in the first decade of the 20th century. Decades later she again enjoyed great success with her role as Mrs. Higgins in the long-running original London production of 'My Fair Lady'. She also made several appearances on film and television. 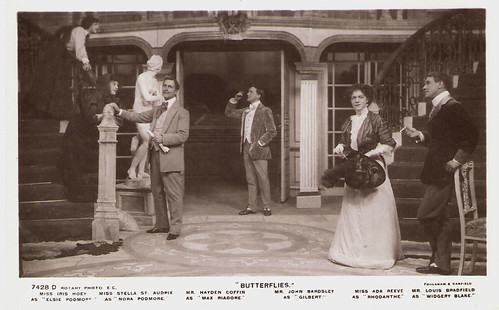 British stage and film actress Ada Reeve (1874-1966) was much loved on three continents. She was one of the most popular British singing comediennes of all time and considered to be a headliner in variety and vaudeville. She was endowed with a softness of voice and delicacy of performance that quite set her apart from virtually all of her more raucous contemporaries in the music halls and popularised many memorable songs. 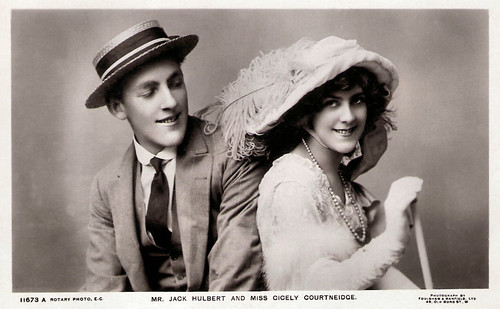 British postcard in the Rotary Photographic Series, no. 11673 A. Photo: Foulsham & Banfield.

British actor Jack Hulbert (1892-1978) was a popular comedian of the 1930s with a trademark chiselled chin. In his musicals, he often appeared with his wife Cicely Courtneidge. British actress Cicely Courtneidge (1893–1980) was an elegantly knockabout comedienne. For 62 years, she formed a husband and wife team with comedian Jack Hulbert on stage, radio, TV and in the cinema. During the 1930s she also starred in eleven British films and one disastrous American production. 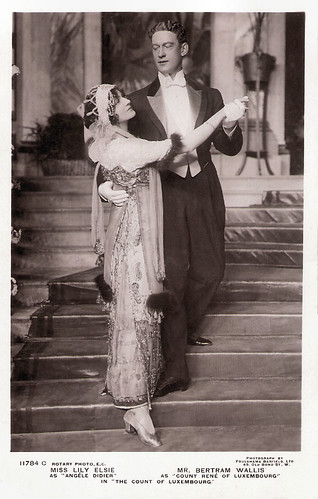 British postcard by Rotary Photo, E.C., no. 11784 C. Photo: Foulsham & Banfield, Ltd. Bertram Wallis and Lily Elsie in 'The Count of Luxembourg', an operetta in two acts with English lyrics and libretto by Basil Hood and Adrian Ross, music by Franz Lehár, based on Lehár's three-act German operetta 'Der Graf von Luxemburg' which had premiered in Vienna in 1909. The original production opened at Daly's Theatre in London in 1911 and ran for 345 performances, starring Lily Elsie, Huntley Wright, W. H. Berry, and Bertram Wallis.

Tall and handsome Bertram Wallis (1874-1952) was a renowned English actor and singer. He was a glamorous matinée idol in popular plays and musical comedies in the early 20th century. Between the two wars, he also appeared in several films. Lily Elsie (1886-1962) basically was an Edwardian music hall singer and actress, who conquered British audiences overnight in 1907 with her role in 'The Merry Widow', but she also performed in two films: The Great Love (1918) by D.W. Griffith and the British film Comradeship (Maurice Elvey 1919). 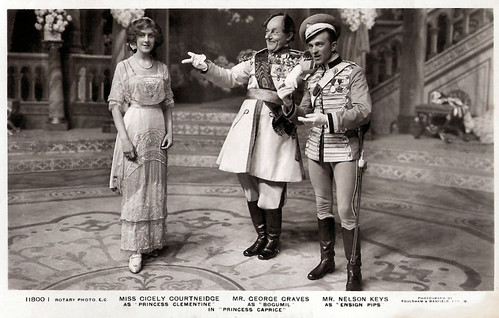 British postcard by Rotary Photo, no. 11800 I. Photo: Foulsham & Banfield Ltd. Cicely Courtneidge as Princess Clementine, George Graves as Bugumil, and Nelson Keyes as Ensign Pips in 'Princess Caprice' (1912). 'Princess Caprice' is a comedy with music, in three acts, with music by Leo Fall. The original production opened at the Shaftesbury Theatre, London, on 11 May 1912, running for 265 performances until January 1913. It was produced by Robert Courtneidge. 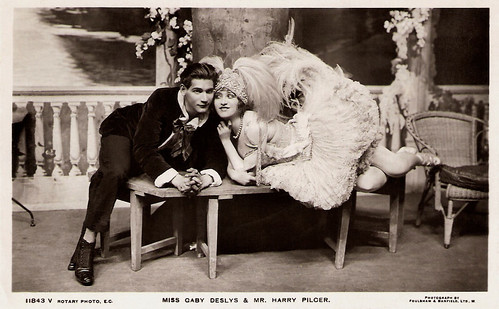 American actor, dancer, choreographer, and lyricist Harry Pilcer (1885-1961) is mainly remembered for his association with French diva Gaby Deslys (1881-1920). He composed a waltz for her, 'The Gaby Glide', which they danced together on Broadway in 'Vera Violetta' (1911-1912). They appeared in three more Broadway musicals together. 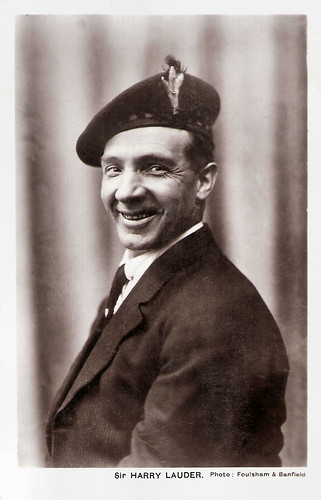 Scottish music hall and vaudeville theatre singer and comedian Sir Harry Lauder (1870-1950) was perhaps best known for his long-standing hit 'I Love a Lassie' and his other simplehearted Scottish songs. With his performances, he promoted the kilt and the 'cromach' (walking stick) worldwide, especially in America. By 1911, Lauder had become the highest-paid performer in the world and was the first Scottish artist to sell a million records. He raised huge amounts of money for the war effort during World War I, for which he was subsequently knighted in 1919. He appeared in several films. 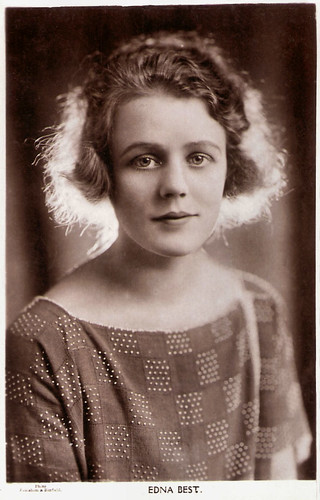 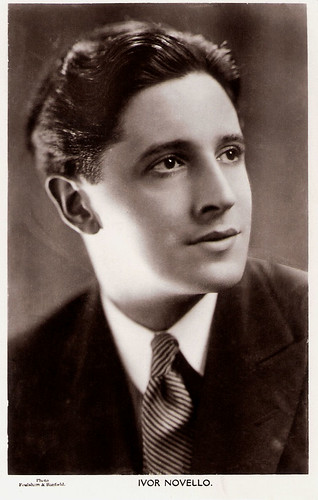 Ivor Novello (1893-1951) was one of the most famous matinee idols, writers and composers of the British stage during the early part of the 20th century. 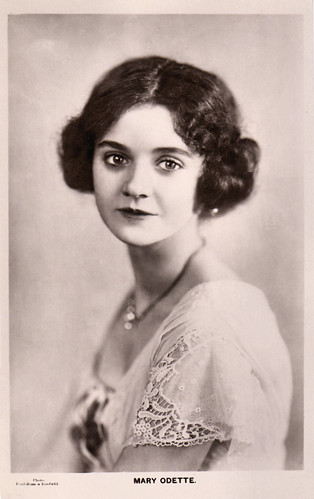 Mary Odette (1901-1987) was a French actress who starred in British, Dutch, German and French silent films. 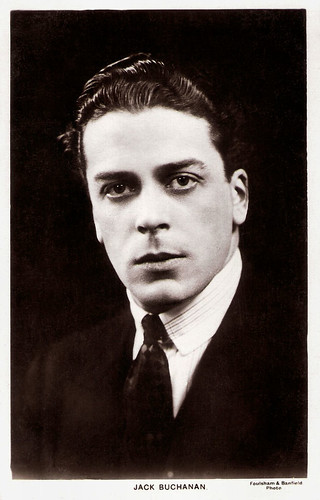 Tall and slim actor and singer Jack Buchanan (1891-1957) was known for three decades as the embodiment of the quintessential Englishman, despite being a Scot. During his career, he was one of the major British screen stars of his day and incarnated the elegant, always immaculately clothed man about town in about three dozen films. In America, he is best known for his role opposite Fred Astaire in the classic Hollywood musical The Band Wagon (1953).