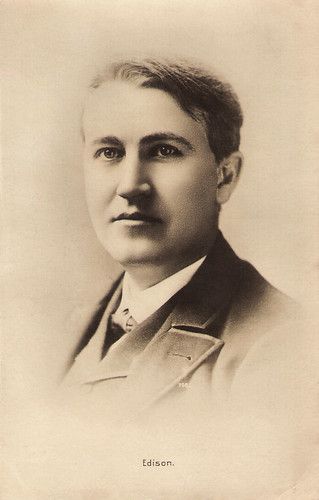 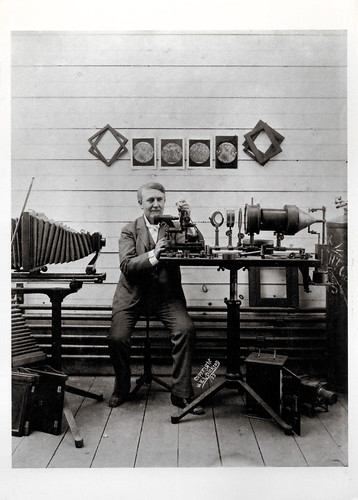 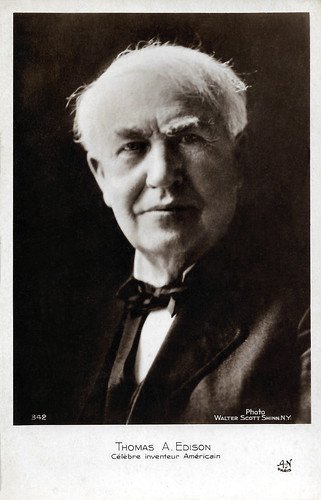 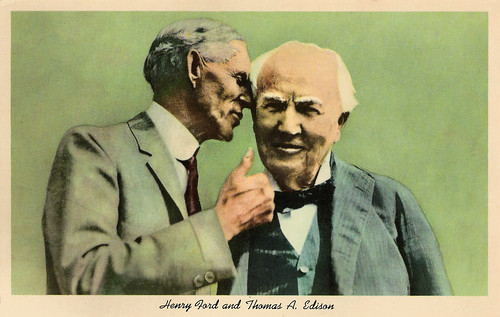 American postcard by Art Creation for the Henry Ford Museum and Greenfield Village, Dearborn, Michigan. Caption: Henry Ford and Thomas A. Edison in conversation at Greenfield Village, in 1928. Their friendship had begun in 1896 when Edison encouraged the then young and unknown Ford's automobile experiments. The deafness, which had afflicted the inventor since childhood, is evident in this pose, as Henry Ford speaks loudly in his ear.

The instigator of the exodus to Hollywood


Thomas Alva Edison was born in 1847 in Milan, Ohio, USA. His father, Samuel Edison, was of Dutch ancestry and his mother, Nancy Elliot, was of English descent. Thomas was home-schooled. He used a primitive cylinder and foil device to create the first known recording of a human voice (his own, reciting the poem 'Mary Had A Little Lamb'). Although he invented the cylinder recorder (phonograph), it was Emile Berliner who created the flat disc. Edison licensed the patent(s) from him.

Other inventions to his credit include cellophane tape, waxed paper, an improved version of the typewriter keyboard, and 'the electric pencil', a forerunner to the fax machine. He is often credited with the invention of the incandescent light bulb, but that is untrue; he only perfected it. Similar bulbs were already in existence but they were expensive, did not last long, and gave off a bad smell. By developing a low-cost, long-lasting, carbonized cotton filament, Edison made electrical light cheap enough to be financially practical.

Thomas Edison is credited with the invention of sprocketed cinema film. He also invented the Kinetograph camera and the peephole kinetoscope viewer. The Edison Manufacturing Company's earliest films were produced solely to demonstrate the use of the peephole viewer. The studio made several experimental short films, some lasting only several seconds, mostly to test his equipment. One film, Edison Kinetoscopic Record of a Sneeze (1894), features a man sneezing, runs for 1-1/2 seconds.

Many of Edison's experimental films were made in a small wooden building dubbed 'The Black Maria' because it resembled a police wagon of the same name. Edison's Black Maria was built on a lot next to his lab and office. The building, essentially a large wooden shed covered with tar paper, was small enough that it was mounted on circular tracks so it could be turned to accommodate sunlight through an opening in the roof. The original has long since burned down, but a reproduction of the structure is located at the Edison National Historic Site, a museum with a preserved laboratory facility in West Orange, New Jersey.

Edison himself played virtually no role in the production of individual films by his company which produced the first American film version of Frankenstein (J. Searle Dawley, 1910). Edison formed the Motion Picture Patent Company (MPPC), and teamed up with a few other prominent figures in film production, giving them a sort of monopoly on filmmaking. They wouldn't let other filmmakers use their technology, and they controlled the different steps of production. Supposedly, they even hired goons to enforce their monopoly. His attempts to force independent filmmakers to use his patented movie equipment resulted in an exodus of the film industry from the East Coast, where almost all films were produced, to California and a little town called Hollywoodland, now known as Hollywood.

The last years of Edison's life were plagued by financial failures, including plans to make houses out of poured formed concrete (it never caught on with the public) and making rubber from goldenrod (it decomposed too quickly). In 1928, he was awarded a Congressional Gold Meda. Thomas Edison was married to Mina Miller and Mary Stilwell. He died in 1931 in West Orange, New Jersey, USA. When he lay dying at his home in New Jersey, newspaper reporters were anxiously awaiting a sign from his wife of Edison's death. She signaled Edison's passing by turning a light ON, not off, in his bedroom. Edison's son allegedly captured his last breath in a glass jar. The jar is on display at the reconstructed Menlo Park at Greenfield Village in Dearborn, Michigan. 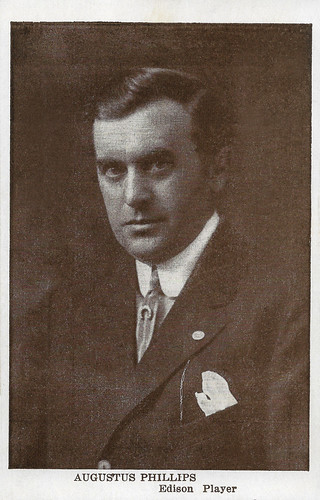 American actor Augustus Phillips (1874-1944) appeared in 134 films between 1910 and 1921. He played Victor Frankenstein, as a young medical student in Frankenstein (J. Searle Dawley, 1910), the very first adaptation produced by the Edison company. 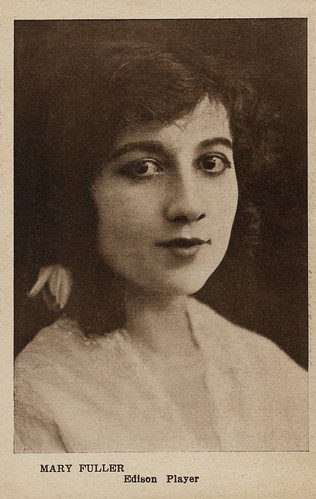 American actress Mary Fuller (1988-1973) started her film career at Vitagraph and had her breakthrough at Edison. At Universal, Fuller became a major early film star who rivaled Mary Pickford in popularity. In 1917, she left the film industry and ended her life in a mental hospital. 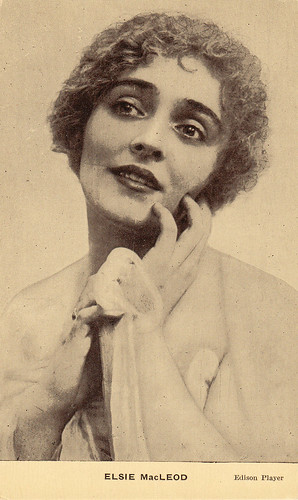 Elsie MacLeod was an American film actress who worked in Hollywood in the 1910s and early 1920s. She was primarily known for her starring roles in short Edison comedies. 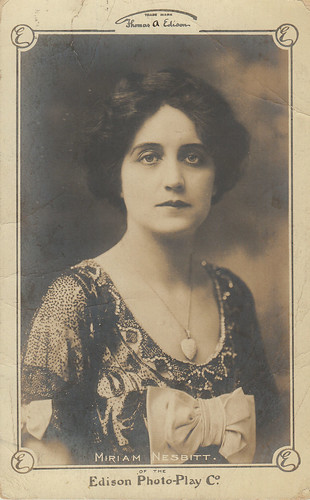 
Probably the best-known film of the Edison Manufacturing Company is the short silent horror film Frankenstein (1910). This film paved the way for modern-day horror as we now know it. It was directed by J. Searle Dawley, who also wrote the one-reeler's screenplay, broadly basing his 'scenario' on Mary Shelley's 1818 novel 'Frankenstein; or, The Modern Prometheus'.

This short film is generally recognised by film historians as the first screen adaptation of Shelley's work. The small cast, who are not credited in the surviving 1910 print of the film, includes Augustus Phillips in his film debut as the young medical student Victor Frankenstein, Charles Ogle as Frankenstein's monster, and Mary Fuller as the doctor's fiancée.

Searle Dawley, working in his third year for Edison Studios, shot the film in three days at the company's Bronx facilities in New York City on 13, 15, and 17 January 1910. In the following years, Augustus Phillips and Mary Fuller became two of the brightest stars of the Edison studio. Both acted in dozens of short silent Edison films.

Mary Fuller starred in Edison's first popular series, What Ever Happened to Mary (Ashley Miller, Charles Brabin, 1912). Twelve one-reel episodes were released monthly beginning July 1912, coinciding with the literary serial of the same name published in McClure's The Ladies' World magazine. In addition to the films and regular magazine installments, What Happened to Mary was also adapted as a stage play, followed by a novelisation, making it an early precursor of the multimedia franchise.

For many years, Frankenstein (J. Searle Dawley, 1910) was believed a lost film. In the early 1950s, a print of this film was purchased by a Wisconsin film collector, Alois F. Dettlaff, from his mother-in-law, who also collected films. Its existence was first revealed in the mid-1970s. Although somewhat deteriorated, the film was in viewable condition, complete with titles and tints as seen in 1910. In 2018, in recognition of Mary Shelly's bicentennial, the Library of Congress completed a full restoration of the short film, having purchased the Dettlaff collection in 2014. 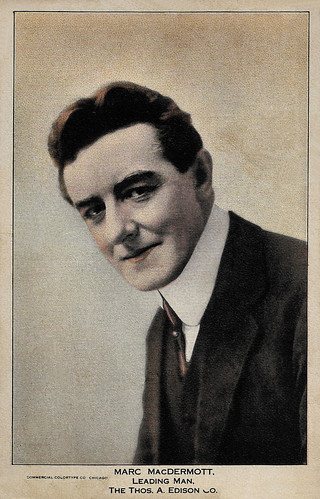 The Australian-born actor Marc McDermott (1881-1929) was one of the most popular leading men of the Edison company. From 1909 through the summer of 1916, he starred in over 140 films for Edison. In A Christmas Carol (J. Searle Dawley, 1910), he featured as Ebenezer Scrooge opposite Charles S. Ogle as Bob Cratchit. Appearing frequently in popular early film magazines like Photoplay, Motion Picture, and Moving Picture World, he was voted as one of the most popular leading men during these years. In 1911, Marc costarred with Mary Fuller in Edison's first popular series What Ever Happened to Mary (Ashley Miller, Charles Brabin, 1912). In 1914, Marc appeared in the first-ever 'chapter' series, The Man Who Disappeared (1914). Each printed chapter story was featured in Popular Magazine as each filmed chapter simultaneously appeared on the screen. 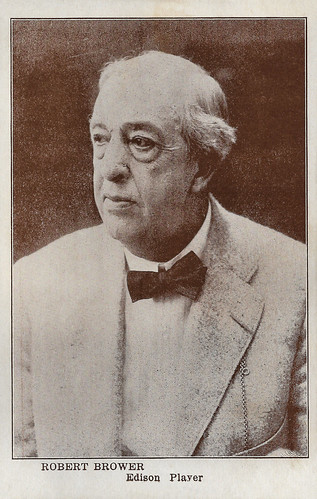 Tall, mustachioed Robert Brower (1950-1934) was an American character actor of the silent cinema. The elderly gent joined Edison in 1911. He remained prolific during the 1920s and was still seen in small roles in early sound films. 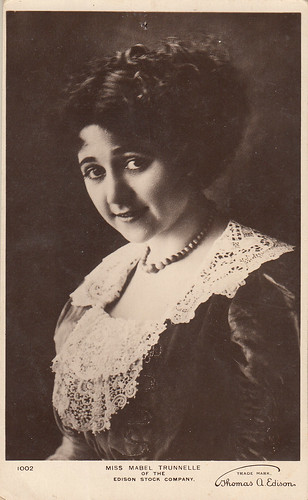 American actress Mabel Trunnelle (1879-1981) was a prominent star in the early silent films of the Edison company. She frequently co-starred with Herbert Prior. Between 1908 and 1923, Trunnelle appeared in 194 films. 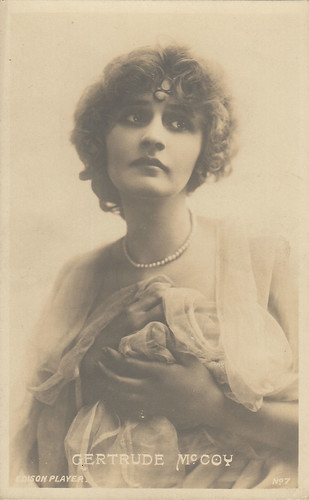 Brunette Gertrude McCoy (1890-1967) was an American film actress of the silent era. She signed up with the Edison Company in 1910 and for at least the next five years appeared in scores of one- and two-reel comedies and melodramas. 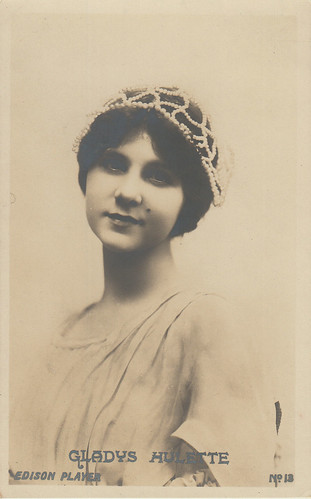 Gladys Hulette (1896-1991) was an American silent film actress who started her career at the age of three as a child player on stage. She began her film career as a 7-years-old in the early years of silent movies and continued until the mid-1930s. During the 1910s and 1920s, she appeared variously in films with Edison, Biograph, Thanhouser, Vitagraph, Astra, and First National. Hulette was also a talented artist.


The restoration of Frankenstein (1910). Sources: Cranked Up Films (YouTube).

Check out our earlier Before Hollywood posts: Vitagraph, Essanay, Biograph, Lubin, Flying A, and Kalem.