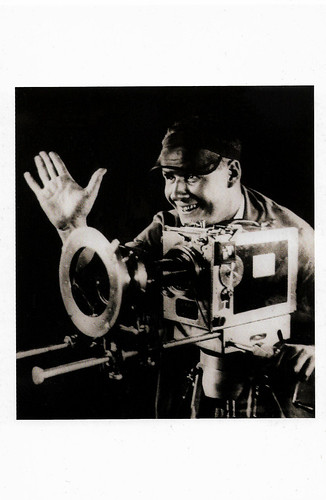 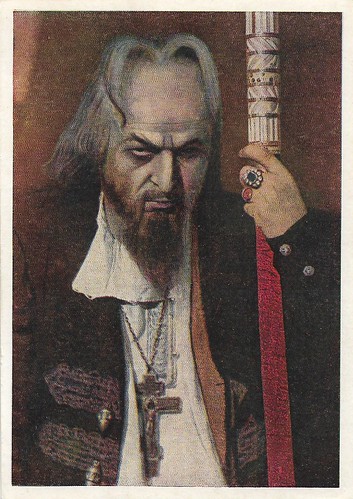 Russian postcard. Nikolay Cherkasov in the title role of Ivan the Terrible/Ivan Grozny (Sergei Eisenstein, 1944-1958). Probably made for the 1958 release of Part 2, although the year 1951 is mentioned at the back. Tirage: 50.000 cards.

The Montage of Attractions


Sergei Mikhailovich Eisenstein (Russian: Сергей Михайлович Эйзенштейн, tr. Sergey Mikhaylovich Eizenshteyn) was born in 1898 in Riga, Latvia (then part of the Russian Empire in the Governorate of Livonia).

He was the son of the famous architect Mikhail Osipovich Eisenstein. Eisenstein was raised as an Orthodox Christian but became an atheist later in life.

As a young man, Eisenstein attended the Institute of Civil Engineering in Petrograd. With the fall of the tsar in 1917, he worked as an engineer for the Red Army.

In 1920, Eisenstein joined up with the Moscow Proletkult Theater as a set designer and later as a director. The Proletkult's director, Vsevolod Meyerhold, became a big influence on Eisenstein, introducing him to the concept of biomechanics, or conditioned spontaneity.

Eisenstein furthered Meyerhold's theory with his own 'The Montage of Attractions, written for art journal LEF. He briefly attended the film school established by Lev Kuleshov and the two were both fascinated with the power of editing to generate meaning and elicit emotion. The 'montage of attractions' is a sequence of pictures whose total emotional effect is greater than the sum of its parts.

Eisenstein's and Kuleshov's individual writings and films are the foundations upon which Soviet montage theory was built, but they differed markedly in their understanding of its fundamental principles. Eisenstein's articles and books, particularly 'Film Form' and 'The Film Sense', explain the significance of montage in detail. He later theorised that this style of editing worked in a similar fashion to Marx's dialectic. 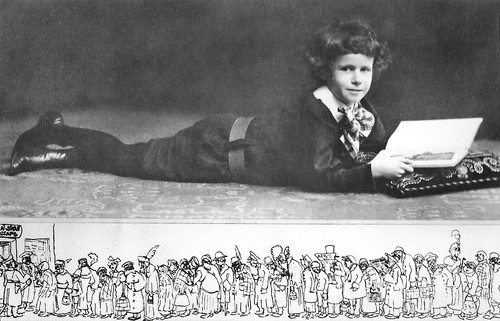 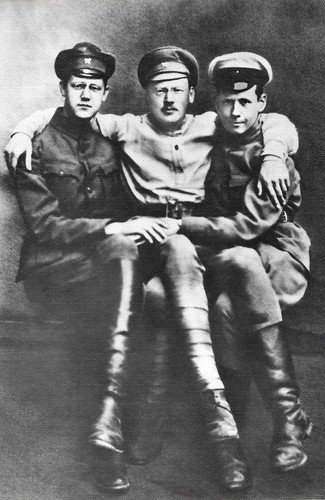 
In 1923, Sergei Eisenstein made his first film, the short Dnevnik Glumova/Glumov's Diary. It was part of the theatre production 'Enough Stupidity in Every Wise Man' (Na vsyakovo mudretsa dovolno prostoty), an 1868 comedy by Alexander Ostrovsky made for the Proletkult organisation. Glumov's Diary marked Eisenstein's transition from theatre stage director to film director.

Eisenstein's next film, Stachka/Strike (1925) was his first full-length feature film. The film depicts a strike in 1903 by the workers of a factory in pre-revolutionary Russia, and their subsequent suppression. The film is most famous for a sequence near the end in which the violent suppression of the strike is cross-cut with footage of cattle being slaughtered.

Bronenosets Potyomkin/Battleship Potemkin (1925) was critically acclaimed worldwide. It presents a dramatised version of the mutiny that occurred in 1905 when the crew of the Russian battleship Potemkin rebelled against its officers.

Mostly owing to this international renown, he was then able to direct Oktyabr': Desyat' dney kotorye potryasli mir/October: Ten Days That Shook the World (1928), as part of a grand tenth-anniversary celebration of the October Revolution of 1917.

Then he directed Staroye i novoye/The General Line/Old and New (Sergei Eisenstein, Grigori Aleksandrov, 1929), a celebration of the collectivisation of agriculture. In these films, Eisenstein did not use professional actors. His narratives eschewed individual characters and addressed broad social issues, especially class conflict. He used groups as characters, and the roles were filled with untrained people from the appropriate classes; he avoided casting stars.

While critics outside Soviet Russia praised these works, Eisenstein's focus in the films on structural issues such as camera angles, crowd movements, and montage brought him and like-minded directors such as Vsevolod Pudovkin and Alexander Dovzhenko under fire from the Soviet film community. Though Eisenstein wanted to make films for the common man, his intense use of symbolism and metaphors in his 'intellectual montage' sometimes lost his audience.

Though he made only seven films in his career, he and his theoretical writings demonstrated how the film could move beyond its nineteenth-century predecessor, the Victorian theatre, to create abstract concepts with concrete images. The attacks of the Soviet film community forced him to issue public articles of self-criticism and commitments to reform his cinematic visions to conform to the increasingly specific doctrines of socialist realism. 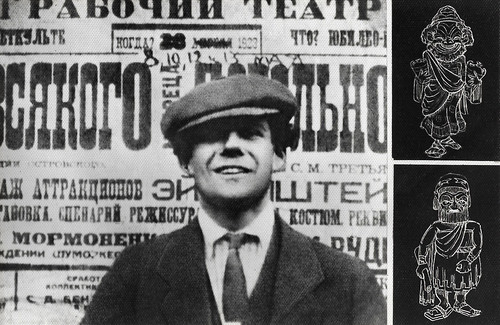 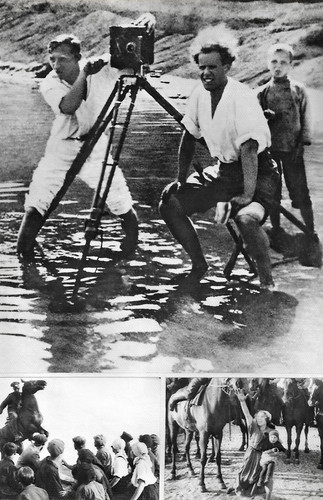 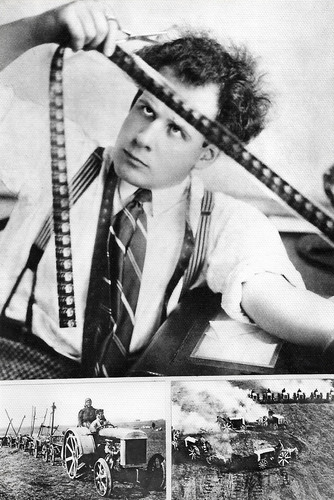 
In the autumn of 1928, with October still under fire in many Soviet quarters, Sergei Eisenstein left the Soviet Union for a tour of Europe, accompanied by his perennial film collaborator Grigori Aleksandrov and cinematographer Eduard Tisse. Officially, the trip was supposed to allow the three to learn about sound film and to present themselves as Soviet artists in-person to the capitalist West.

For Eisenstein, however, it was an opportunity to see landscapes and cultures outside the Soviet Union. He spent the next two years touring and lecturing in Berlin, Zürich, London, and Paris. In Switzerland, Eisenstein supervised an educational documentary about abortion, Frauennot – Frauenglück/Women's Misery - Women's Happiness (Eduard Tissé, 1929).

In late April 1930, film producer Jesse L. Lasky, on behalf of Paramount Pictures, offered Sergei Eisenstein the opportunity to make a film in the United States. Paramount proposed a film version of Theodore Dreiser's 'An American Tragedy'. Eisenstein completed a script but Paramount disliked it and, Paramount and Eisenstein annulled their contract.

Charles Chaplin recommended that Eisenstein would meet with American socialist author Upton Sinclair. Sinclair's works were widely read in the USSR and were admired by Eisenstein. Sinclair secured permission for Eisenstein to travel to Mexico to make a film produced by Sinclair.

Whilst in Mexico, he mixed socially with Frida Kahlo and Diego Rivera. However, ¡Que viva México! met many problems and Sinclair shut down production before the film was finished. In 1978, Grigori Aleksandrov released his own version of ¡Que viva México!, which was awarded the Honorable Golden Prize at the 11th Moscow International Film Festival in 1979.

Eisenstein's foray into the West made the staunchly Stalinist film industry look upon him with a suspicion that would never completely disappear. He spent some time in a mental hospital in Kislovodsk in July 1933, ostensibly a result of depression born of his final acceptance that he would never be allowed to edit the Mexican footage. He was subsequently assigned a teaching position at the State Institute of Cinematography where he had taught earlier, and in 1933 and 1934 was in charge of writing the curriculum. 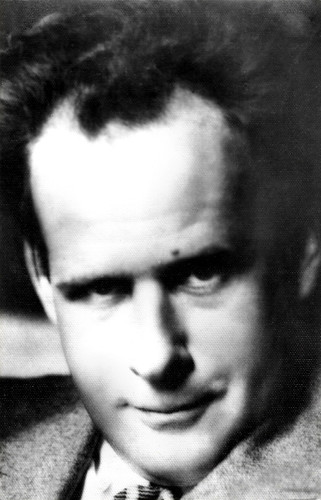 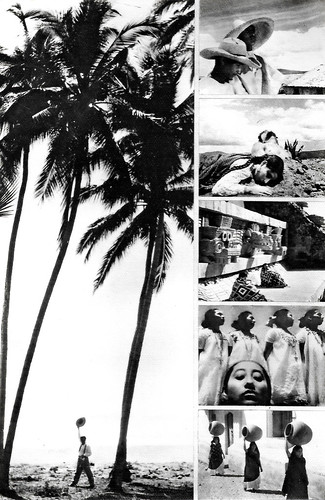 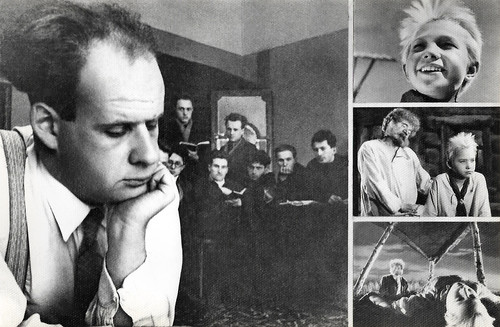 Soviet postcard by Izdatelʹstvo 'Planeta' Fabrika Fotopečati, Moscow, no. 32, 1978. This postcard was printed in an edition of 25.000 cards. The price was 8 kop. Captions: Sergei M. Eisenstein with his students at the All-Union State Institute of Cinematography, 1934. Scenes from Bezhin lug/Bezhin Meadow (Sergei Eisenstein, 1937).


Finally, Sergei Eisenstein was able to ingratiate himself with Stalin for 'one more chance', and he chose, from two offerings, the assignment of a biopic of Alexander Nevsky, with music composed by Sergei Prokofiev. He was assigned a co-scenarist, Pyotr Pavlenko, to bring in a completed script; professional actors to play the roles including Nikolai Cherkasov in the title role, and an assistant director, Dmitri Vasilyev, to expedite shooting.

The result, the historical drama Alexander Nevsky (1938) was critically well-received by both the Soviets and in the West and won him the Order of Lenin and the Stalin Prize. It depicts the attempted invasion of Novgorod in the 13th century by the Teutonic Knights of the Holy Roman Empire and their defeat by Prince Alexander, known popularly as Alexander Nevsky (1220–1263).

Eisenstein returned to teaching and was assigned to direct Richard Wagner's 'Die Walküre' at the Bolshoi Theatre. With the war approaching Moscow, Eisenstein was one of many filmmakers evacuated to Alma-Ata, where he first considered the idea of making a film about Tsar Ivan IV. Eisenstein corresponded with Prokofiev from Alma-Ata and was joined by him there in 1942. Prokofiev composed the score for Eisenstein's film epic Ivan Grozniy/Ivan the Terrible and Eisenstein reciprocated by designing sets for an operatic rendition of 'War and Peace' that Prokofiev was developing.

In 1934, in the Soviet Union, Eisenstein married filmmaker and screenwriter Pera Atasheva. There have been debates about Eisenstein's sexuality, with a film covering Eisenstein's homosexuality allegedly running into difficulties in Russia. According to film critic Vitaly Vulf, the 10-years-long Eisenstein-Aleksandrov "friendship is still a subject of speculation and gossips, although there is no evidence they had had a sexual relationship".

Eisenstein suffered a heart attack in 1946 and spent much of the following year recovering. He died of a second heart attack in 1948, at the age of 50. His body had lain in state in the Hall of the Cinema Workers before being cremated and his ashes were buried in the Novodevichy Cemetery in Moscow. 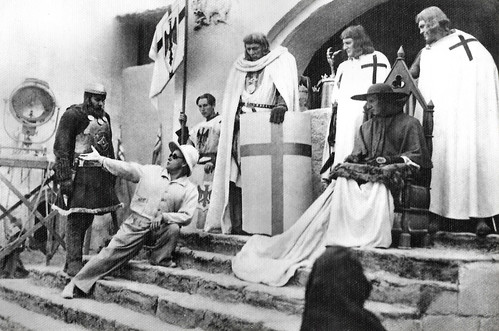 Soviet postcard by Izdatelʹstvo 'Planeta' Fabrika Fotopečati, Moscow, no. 32, 1978. Photo: V. Trohačeva. This postcard was printed in an edition of 25.000 cards. The price was 8 kop. Caption: Sergei Eisenstein at the set of Aleksandr Nevskiy/Alexander Nevsky (Sergei Eisenstein, Dmitri Vasilyev, 1938). 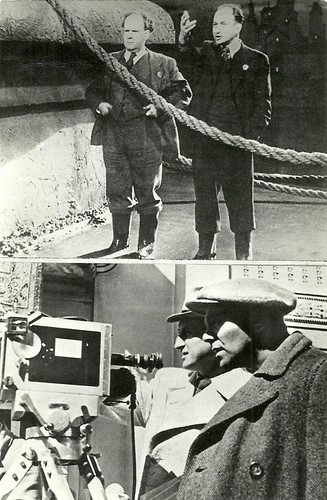 Russian combined postcard. Russian filmmakers Sergej Eisenstein and Michael Romm at the Mosfilm studio. On top Eisenstein and Romm, bottom Romm and his director of photography Boris Volcheck, "1940". The card itself dates of 1981, "Planeta", Moscow. Tirage 20.000. Romm was the artistic leader of Mosfilm in 1940-1943. The picture of Romm and Volchek refers to the film Dreams/Mechta, which was finished in 1941 but released only in 1943. The picture of Eisenstein may have been made on the set of Ivan the Terrible, shot between 1941 and 1944, or on the set of Romm's film. 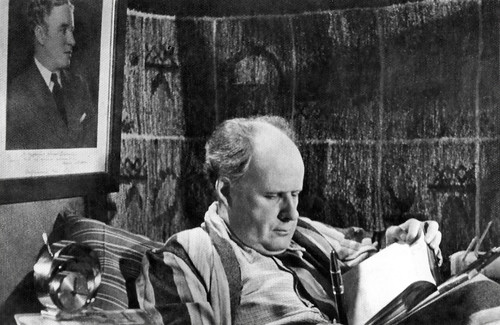 Soviet postcard by Izdatelʹstvo 'Planeta' Fabrika Fotopečati, Moscow, no. 32, 1978. Photo: V. Dombrovskogo. This postcard was printed in an edition of 25.000 cards. The price was 8 kop. Caption: Sergei Eisenstein, 1942. 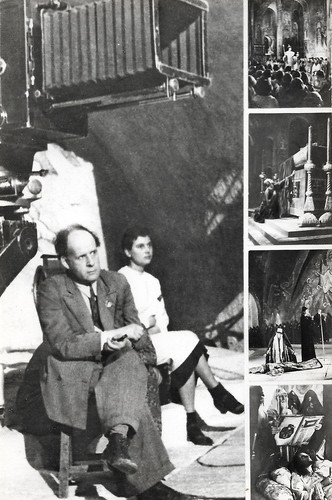