The 18th Disney animated feature film, The Sword in the Stone (Wolfgang Reitherman, 1963) is a take on King Arthur's legend, scripted by Bill Peet. It was the final Animation feature to be released before Walt Disney's death and the first solo directorial effort of famous animator Wolfgang Reithermann. 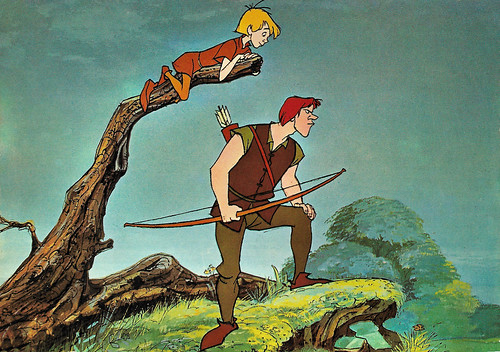 Italian postcard by Grafiche Biondetti S.R.L., Verona, no. 116. Image: Disney. Publicity still for The Sword in the Stone (Wolfgang Reitherman, 1963). 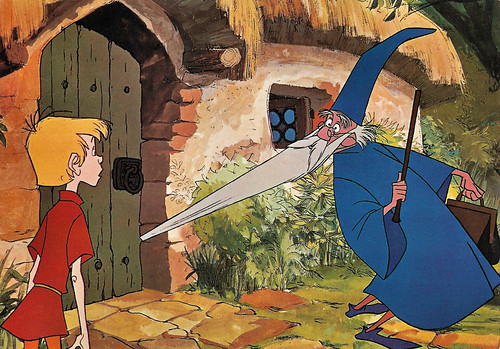 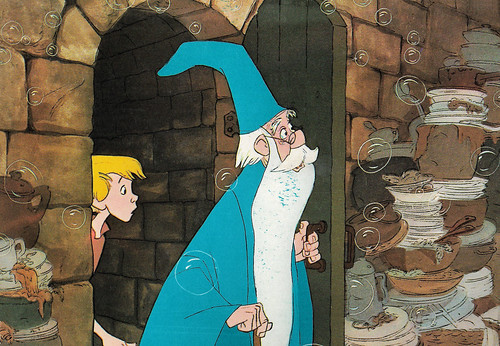 A screamingly funny bit of nonsense


The Sword in the Stone (Wolfgang Reitherman, 1963) is based on the novel by T.H. White, which was first published in 1938, and was republished in 1958 as the first book of the tetralogy 'The Once and Future King'. In 1939, Walt Disney first obtained the film rights to White's novel, and the initial storyboards were produced in 1949. When work on One Hundred and One Dalmatians was completed in 1960,  The Sword in the Stone was in development by veteran story artist Bill Peet.

After Disney had seen the 1960 Broadway production of 'Camelot', he approved the project to enter production. The Sword in the Stone, was released to theatres on 25 December 1963 to mixed reviews. The songs in the film were written and composed by the Sherman Brothers.

The King of England dies, and no heir to the throne is named, leaving England threatened to be torn apart by war. Miraculously, the 'Sword in the Stone' appears inside an anvil in London, with an inscription proclaiming that whoever can pull it out is the rightful King of England. Many try to remove the sword, but none succeed, and the sword is eventually forgotten, leaving England in the Dark Ages.

Years later, a 12-year-old orphan named Arthur, commonly called Wart, meets Merlin the wizard, and his talking pet owl Archimedes. Merlin declares himself Arthur's tutor. Sir Pellinore announces that the annual jousting tournament will be held in London, and the winner will be crowned king. Sir Ector, Arthur's foster father, decides to put his son, Kay through serious training for the tournament and appoints Arthur as Kay's squire.

Bosley Crowther of The New York Times praised the film: "Adapting T. H. White's beloved novel of King Arthur's boyhood, the Disney unit has shaped a warm, wise and amusing film version. The unorthodox source, with its artful earthiness, was certainly no snap undertaking as a movie cartoon. To the credit of the scenarist, Bill Peet, the director, Wolfgang Reitherman, and their colleagues, the picture makes an eye-filling package of rollicking fun and thoughtful common sense. The humor sparkles with real, knowing sophistication."

"Just as flavorsome, visually, are several droll caricatures of English nobility, a temperamental, educated owl named Archimedes and, for good measure, a perky, self-spooning little sugar bowl. But the most beguiling of the lot is Merlin's arch rival, a harum-scarum old sorceress named Madam Mim. Their 'magicians' duel', a screamingly funny bit of nonsense, is pure Disney gold. This sequence alone should be enough Christmas for anybody."

Aubry Anne D'Arminio at AllMovie: "The lackluster animation and unimpressive musical numbers disappointed audiences upon the film's initial opening, but its tale of a stout-hearted child destined for greatness proved timeless as it lured scores of Disney fans to theaters upon its several re-releases."

"If the movie's animation is not up to par, the remarkable and eccentric characters well make up for it. The skinny, bowlegged Wart is as much a hero as his predecessors, the wooden Pinocchio and the big-eared Dumbo. Moreover, Merlin's skeptical sidekick, the scholarly owl Archimedes, as well as his wacky nemesis, the sorceress Mad Madam Mim , make the film as colorful as any of its state-of-the-art cartoon counterparts."

The Sword in the Stone was a box office success and became the sixth highest-grossing film of 1963. A live-action adaptation of the film directed by Juan Carlos Fresnadillo is scheduled to be released later in 2019.

This was the last post in our Walt Disney week, but more posts on Disney Classics will follow soon. 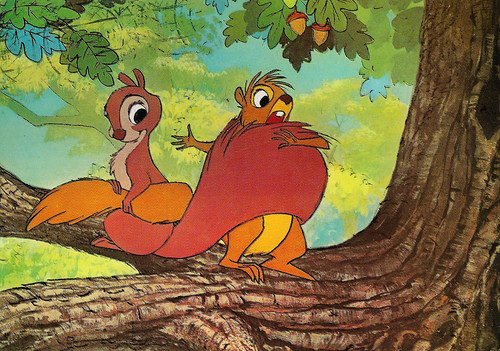 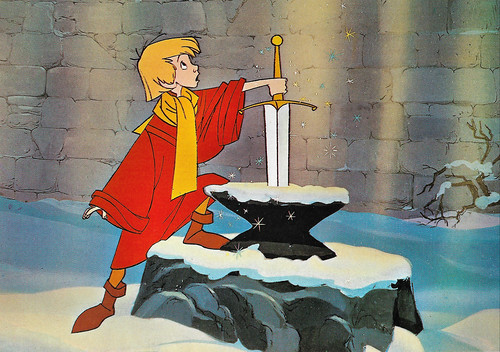 Italian postcard by Grafiche Biondetti S.R.L., Verona, no. 116/1. Image: Disney. Publicity still for The Sword in the Stone (Wolfgang Reitherman, 1963). 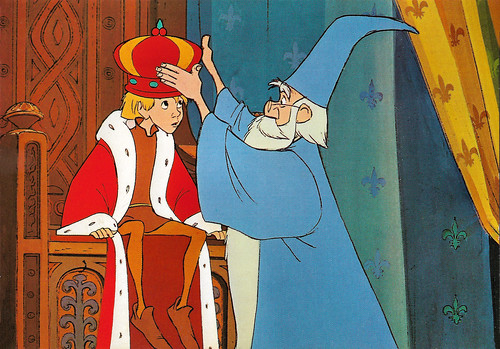 Italian postcard by Grafiche Biondetti S.R.L., Verona. Image: Disney. Publicity still for The Sword in the Stone (Wolfgang Reitherman, 1963). Sent by mail in 1998.