EFSP continues its series on directors with a post on the influential Soviet filmmaker Andrei Tarkovsky (Андрей Тарковский, 1932-1986). Director Ingmar Bergman once called Tarkovsky the greatest of them all. His films explored spiritual and metaphysical themes, and are noted for their slow pacing and long takes, dreamlike visual imagery, and preoccupation with nature and memory. Tarkovsky directed his first five features in the Soviet Union: Ivanovo detstvo/Ivan's Childhood (1962), Andrei Rublev/Andrei Roublev (1966), Solyaris/Solaris (1972), Zerkalo/The Mirror (1975), and Stalker (1979). After years of creative conflict with state film authorities, Tarkovsky left the country in 1979 and made his final films abroad. The documentary Tempo di Viaggio/Voyage in Time (1983), and the features Nostalghia/Nostalgia (1983), and Offret/The Sacrifice (1986) were produced in Italy and Sweden. In 1986, Tarkovsky also published a book about cinema and art, 'Sculpting in Time'. He died of cancer later that year, only 54 years old. It's hard to find vintage postcards of Tarkovsky's films, so for this post, we focussed on postcards of his actors. 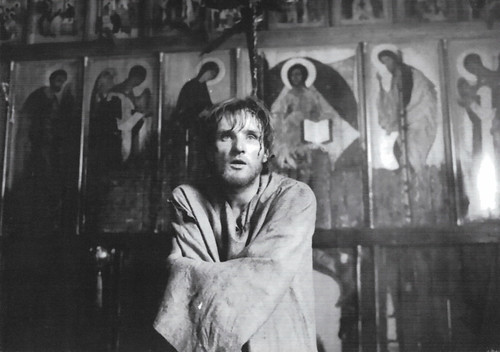 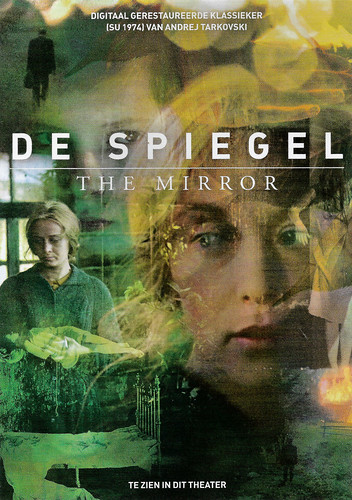 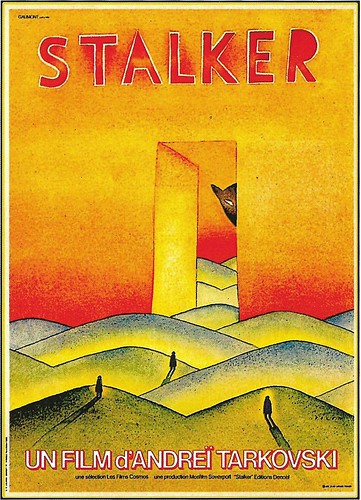 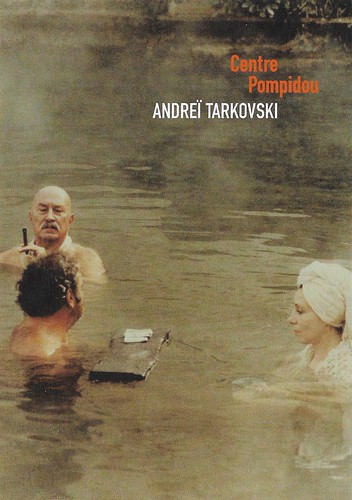 French postcard for the Andrei Tarkovsky retrospective at the Centre Pompidou, Paris, 9-27 October 2002. The card shows a still from Nostalghia (Andre Tarkovsky, 1982-1983), depicting the healing bath at Bagno Vignoni in Tuscany. 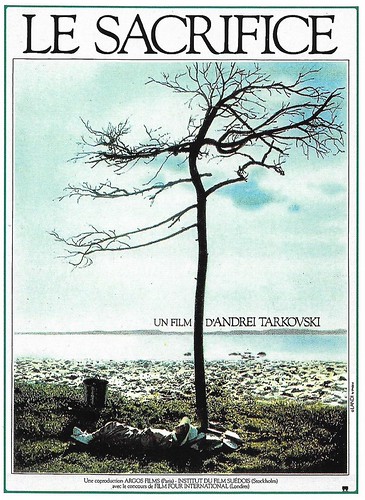 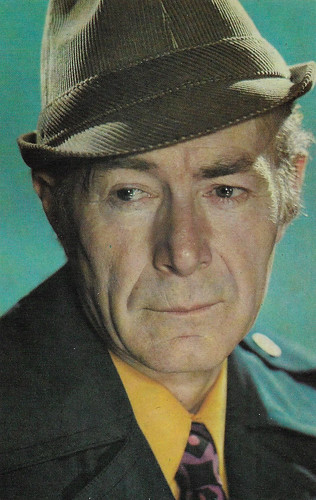 Nikolai Grigoryevich Grinko or Mykola Hryhorovych Hrynko (Микола Григорович Гринько or Никола́й Григо́рьевич Гринько́; 1920-1989) was a Soviet and Ukrainian actor, well known for his roles in the Soviet films of Andrei Tarkovsky, Ivanovo detstvo/Ivan's Childhood (1962), Andrei Rublev (1966), Solyaris/Solaris (1972), Zerkalo/The Mirror (1975), and Stalker (1979). Andrei Tarkovsky shot to international attention with his first feature, Ivanovo detstvo (1962), which won the top prize at the Venice Film Festival. This resulted in high expectations for his second feature, Andrei Rublev (1966), which was banned by the Soviet authorities for two years. It was shown at the 1969 Cannes Film Festival at four o'clock in the morning on the last day, in order to prevent it from winning a prize. It won an award nonetheless and was eventually distributed abroad partly to enable the authorities to save face. 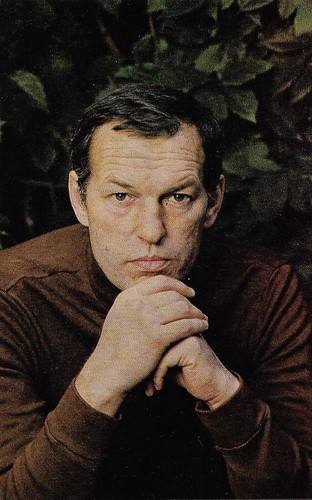 Lithuanian film and stage actor Regimantas Adomaitis (1937) played the title role of the Communist leader Lazo in the historical drama Sergey Lazo (Aleksandr Gordon, 1968), which was co-written by Andrei Tarkovsky, although he did not receive official credit for it. 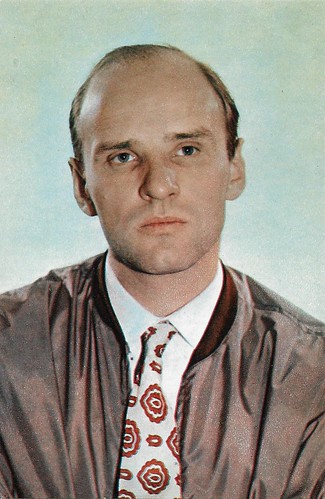 Soviet and Russian actor Anatoly Solonitsyn (Анатолий Солоницын; 1934-1982) was 'discovered' by Tarkovsky in the casting process for Andrei Rublev (1966), in which he played the title role. Solonitsyn was an unknown provincial theater actor from Sverdlovsk at the time, but he took the opportunity to go to Moscow and try himself in the casting for the Andrei Rublev role. The historical consultant of the film saw the photos of actors from the casting, pointed to a photo of Solonitsyn, and said to Tarkovsky: "This one is Rublev". Solonitsyn later also played Dr. Sartorius in Solaris (1972), the physician in Zerkalo/The Mirror (1975), and the Writer in Stalker (1979).

In his book 'Sculpting in Time', Tarkovsky calls him his favourite actor and writes that Solonitsyn was also intended to play the lead roles in Nostalghia (1983) and The Sacrifice (1986), but the actor died before their production. Tarkovsky admired Solonitsyn's ability to fully embody the ideas of the director. When Tarkovsky was considering making a film adaptation of Dostoyevsky's famous novel 'The Idiot', Solonitsyn was even ready to do the plastic surgery to look more like the iconic Russian writer. Allegedly, according to Victor Sharun, the sound editor on Stalker, Solonitsyn, Tarkovsky, and Larisa Tarkovskaya became ill due to exposure to toxic chemicals during filming on the location of the film. Solonitsyn died from cancer in 1982, at the age of 47. 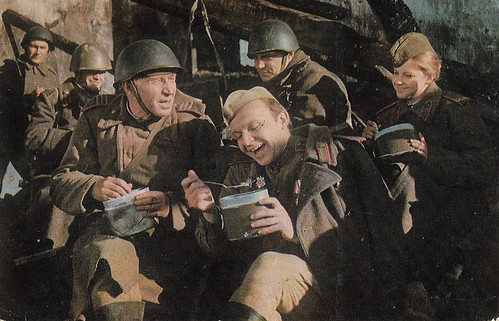 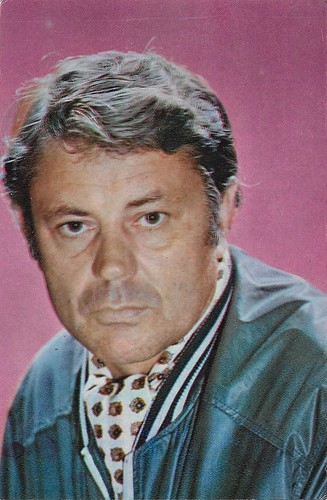 Lithuanian and Soviet actor Donatas Banionis (1924-2014) played the lead role of Kris Kelvin in Solaris (1972), based on Stanislaw Lem’s novel. Kelvin, a psychologist, is sent to a space station placed in orbit around the planet Solaris, where the two surviving scientists of five (three committed suicide) tell him the ocean of the planet is capable to fulfill their wishes. Kelvin meets his dead wife Hari (Natalya Bondarchuk), tries to kill this phantom but fails to do so, and she becomes more and more real, even if lacking a memory. The phantoms prove to be the products of the planet, communicating with humans. In the end, Kelvin returns to Earth. Or is this Earth also a simulation?

Tarkovski thus stressed the limits of knowledge, the reality behind reality, and the subjectivity of perception. The film premiered at the 1972 Cannes film festival, won the Grand Prix Spécial du Jury, and was nominated for the Palme d'Or. It premiered in the Soviet Union in 1973. In 2002 a remake of the film was made by Steven Soderbergh, starring George Clooney. Dreading the making of this remake, in 2002 Salman Rushdie praised Tarkovski’s original as an “exploration of the unreliability of reality and the power of the human unconscious, the great examination of the limits of rationalism and the perverse power of even the most ill-fated love”. 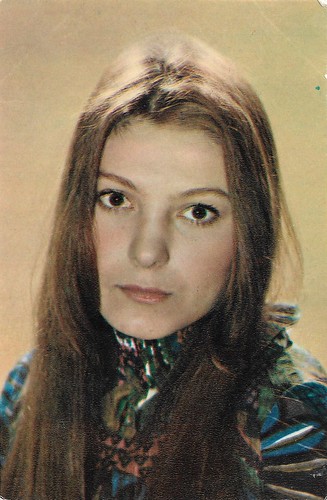 Natalya Bondarchuk (Наталья Бондарчук, 1950) is a Soviet and Russian actress and film director. She is the daughter of the Ukrainian director and actor Sergei Bondarchuk. In Andrei Tarkovsky's remarkable Science-Fiction film Solaris (1972) she played Hari Kelvin. She was Tarkovsky's favourite of the film, as he wrote in his diary that "Natalya B. has outshone everybody". On the set of the film Kak zakalyalas stal/How the Steel Was Tempered (Nikolai Mashchenko, 1973) she met her future husband, actor Nikolai Burlyayev, who had worked with Tarkovsky too. He had been the principal actor in Tarkovsky's Ivanovo detstvo/Ivan's Childhood (1962) and also had a major part in Tarkovsky's Andrei Rublev (1966). 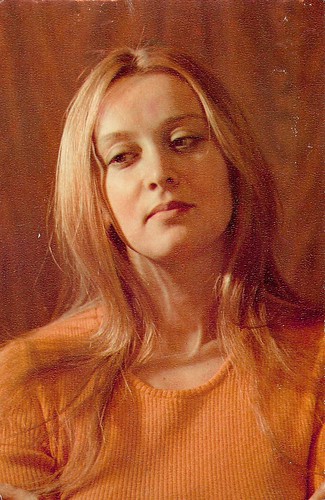 Soviet-Russian postcard. Photo: Bondareva, Caption on the back: "The Wonderful Artist of the RSFSR", 1978.

Margarita Terekhova (Маргари́та Те́рехова; 1942) played a dual role in Andrei Tarkovsky's film Zerkalo/The Mirror (1975) as the young Maria/Masha/Maroussia (Alexei's mother) and Natalia (Alexei's wife). Zerkalo is loosely autobiographical, unconventionally structured, and incorporates poems composed and read by the director's father, noted poet Arseny Tarkovsky. Mirror depicts the thoughts, emotions, and memories of Alexei, or Alyosha (Ignat Daniltsev), and the world around him as a child, adolescent, and forty-year-old. Mirror draws heavily on Tarkovsky's own childhood. Memories such as the evacuation from Moscow to the countryside during the war, a withdrawn father, and his own mother, who actually worked as a proofreader at a printing press, featured prominently. Its cinematography slips between color, black-and-white, and sepia. The film's loose flow of visually oneiric images has been compared with the stream of consciousness technique in modernist literature. Tarkovsky also directed Terekhova on stage as Gertrud in 'Hamlet' (1977). 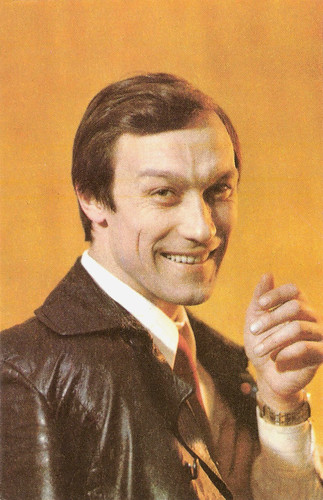 Russian postcard by Izdanije Byuro Propogandy Sovietskogo Kinoiskusstva, no. 2114221, 1977. This postcard was printed in an edition of 186.000 cards. The price was 6 kop.

Acclaimed Russian actor Oleg Yankovsky (1944-2009) excelled in psychologically sophisticated roles of modern intellectuals such as in two of Andrei Tarkovsky's most haunting and poetic films, Zerkalo/The Mirror (1975) as Alexei's father, and Nostalghia (1983) in the main role. In Nostalghia, Yankovsky plays a Russian writer who visits Italy to carry out research about an 18th-century Russian composer but is stricken by homesickness. The film uses autobiographical elements drawn from Tarkovsky's own experiences visiting Italy and explores themes surrounding the untranslatability of art and culture. Several scenes of the film were set in the countryside of Tuscany and northern Lazio; such as the Abbey of San Galgano, the spas of Bagno Vignoni, the Orcia Valley, in the Province of Siena, and the mysterious crypt of the Chiesa di San Pietro (Tuscania). 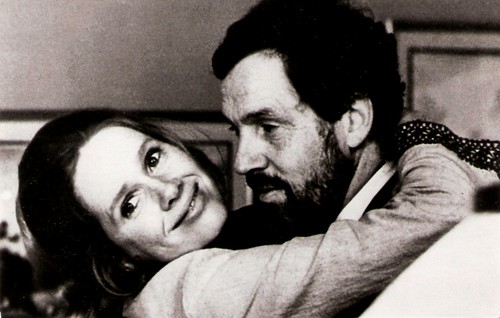 Swedish actor and author Erland Josephson (1923-2012) was best known for his work in films directed by Ingmar Bergman and Andrei Tarkovsky. He starred in Tarkovsky's last two films, Nostalghia (1983) and Offret/The Sacrifice (1986). The latter film was shot in Sweden with many of Ingmar Bergman's regular collaborators and won an almost unprecedented four prizes at the Cannes Film Festival. In Offret, Josephson played a middle-aged intellectual who attempts to bargain with God to stop an impending nuclear holocaust. It was Tarkovsky's final film, as he died shortly after its completion.