Blonde, green-eyed bombshell Christine Norden (1924-1988) was Britain’s first post-war screen sex goddess. The ex-dancer, actress and singer won in the late 1940s and early 1950s two prestigious film awards, but she was best known for her 39 inch breasts and her racy image. 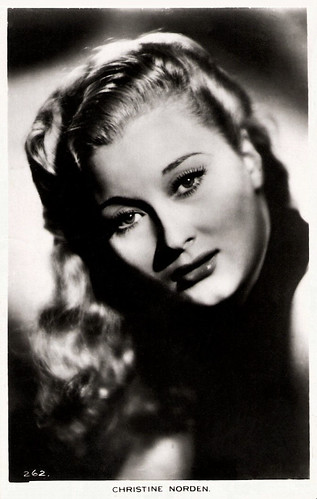 
Christine Norden was born Mary Lydia Thornton in Sunderland, Great Britain on Christmas day in 1924. She was the daughter of Charles Hunter; a bus driver, and Catherine (McAloon) Thornton.

Christine performed as a dancer and a singer since her teens. She made her London stage debut as Molly Thornton in Tell the World in 1942. She became the first entertainer to land on Normandy beaches in 1944 to perform for Allied troops after D-Day.

The story goes that she was ‘discovered’ in 1947 by agents of the distinguished film mogul Sir Alexander Korda while waiting outside a theatre ticket line. Korda promptly signed her to a seven-year contract, and Christine also became his mistress.

She made her film debut in the melodrama Night Beat (Harold Huth, 1947) as an alluring temptress. She was known for her 39 inch breasts which made her a prime pin-up attraction.

Korda placed her in stark, dark-edged films as fetching, sometimes singing femmes, appearing in a surprising number of quality films including Mine Own Executioner (Anthony Kimmins, 1947) opposite Burgess Meredith and An Ideal Husband (Alexander Korda, 1948) starring Paulette Goddard.

She won a Venice Festival award for most promising actress in 1947, and the British National Film Award in 1949 for her performance in Saints and Sinners (Leslie Arliss, 1949). 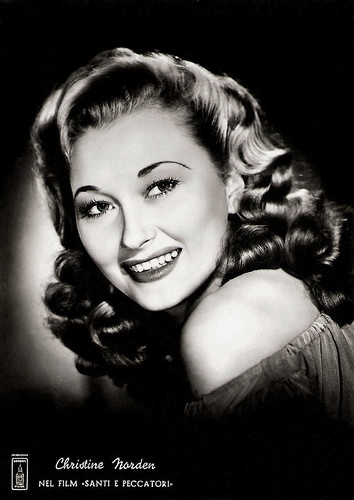 
By the early 1950s the film career of Christine Norden was over. Her last British film was the thriller The Black Widow (Vernon Sewell, 1951), and the following year she went to New York.

Her Broadway debut was in the musical Tenderloin in 1960 and later she appeared in such productions as Marat/Sade. She was the first actress to appear topless on Broadway in Scuba Duba (1967).

Although she became an American citizen, she returned to London in 1979 and acted in plays, films and television shows during the 1980s, including the musical Little Shop of Horrors (Frank Oz, 1988) and in an episode of the popular TV series Inspector Morse (1987).

Christine Norden admitted to many affairs (both men and women) over the years, and she is reported to have had affairs with Richard Burton and Ava Gardner, along with Prince Philip.

She was married five times (including with director Jack Clayton). One of the craters of the planet Venus has been named after her as a tribute to her being a ‘forerunner of the modern sex symbol.’ Her last husband, George Heselden, a retired mathematician, developed and named a mathematical formula in her honour.

After a bypass surgery, she died of pneumonia in 1988, in Isleworth, England. She was 63, and had one child, Michael Glenn, from her first marriage. Her memoirs were discovered after she died, but were considered too racy to be published at the time. Her friend, and royal biographer, Michael Thornton, to whom they were left, has now made parts of the story public. 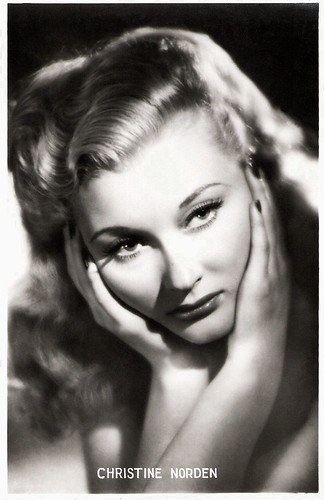 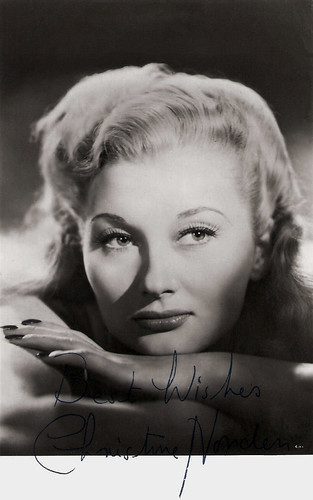