There are several definitions of a “caricature”. Here is one I’ve found especially interesting: “A caricature of someone is a drawing that exaggerates their appearance or behavior in a humorous or critical way”. Yes, caricatures can range from rather benevolent to cruel or unflattering. But most of the time, being caricatured meant that you had achieved a certain degree of fame. So, the celebrities could accept it more easily, as it was proof of their prominence.
Here is a selection of caricature postcards from my collection. I hope you will enjoy them as much as I had fun selecting them. 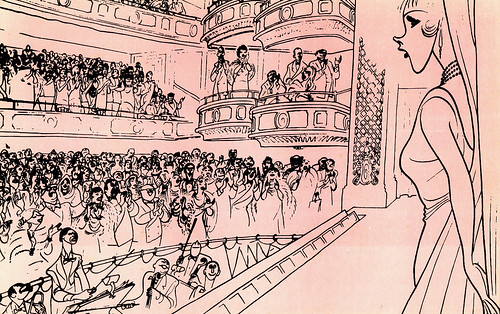 Vintage American postcard. Caricature by Al Hirschfeld. Caption on the back: “JULIE ANDREWS as the STAR! Drawn by the distinguished American artist, Al Hirschfeld, during a visit to the set of the Robert Wise Film, STAR !, directed by Robert Wise, produced by Saul Chaplin and released by 20th Century Fox.” Collection: Marlene Pilaete.

Al Hirschfeld (1903-2003) was a major 20th Century’s American illustrator, famous for his caricatures of celebrities, including Broadway and movie stars, singers, and politicians. 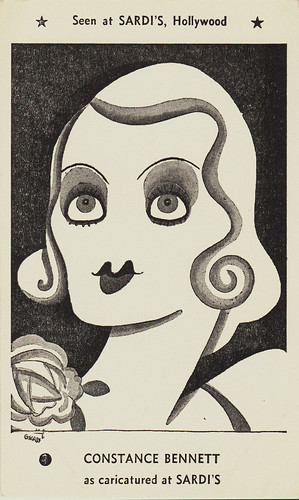 Sardi’s is the name of a famous restaurant. The original Sardi’s opened in New York in 1927 and quickly became a Broadway institution. In 1932, a Sardi’s restaurant opened in Hollywood but was destroyed in a fire in 1936.

Joe Grant (1908-2005) worked as a caricaturist before joining the Walt Disney studios, where he became a celebrated writer and character designer. 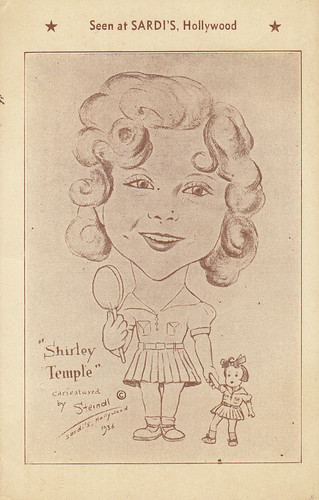 After he had emigrated to the U.S.A., Hungarian-born Charles R. Steindl first worked as a photographer. Later, in the 1930s, he wisely turned to the art of caricature, which brought him recognition. 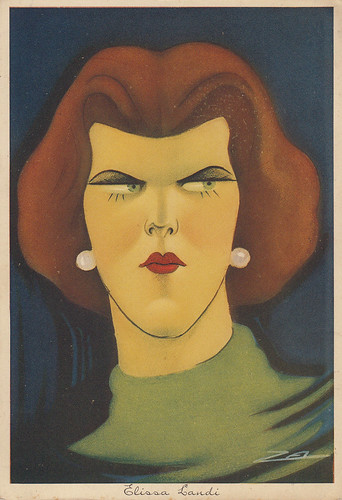 This card comes from a first series of caricature postcards. They were published in the first half of the 1930s and were devoted to international and some Italian film stars. 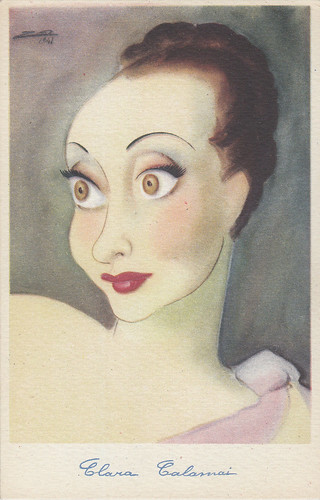 This card comes from a second series of caricature postcards. They were published at the beginning of the 1940s and were devoted to Italian film stars. 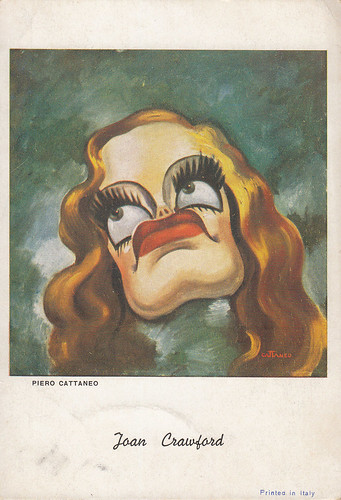 Piero Cattaneo (1894-1984) was a well-known Italian sculptor, ceramist, and caricaturist. 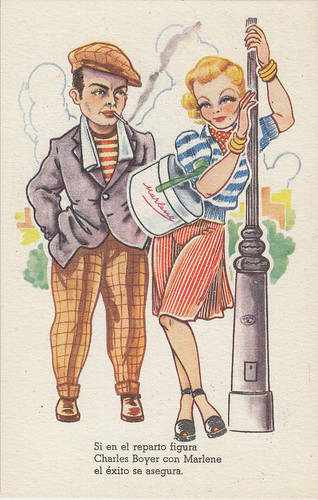 Spanish postcard by PD or DP (series 1091). Caption: “If the film features Charles Boyer and Marlene, it will surely be a hit”. Collection: Marlene Pilaete.

It’s a pity that this card is not signed, as it is an especially cute one. With his cap, his striped shirt, and a cigarette in his mouth, Boyer is turned into a perfect example of the underworld Frenchman, and Marlene Dietrich is quite easily recognizable with her high cheekbones, plucked eyebrows, and long eyelashes. Dietrich and Boyer co-starred in The Garden of Allah (1936) but the action of the film takes place in the Sahara Desert, which is not the case with this postcard. For the scenery, maybe the artist has been inspired by a scene from the film Arch of Triumph (1947) showing Charles Boyer and Ingrid Bergman around a streetlight. 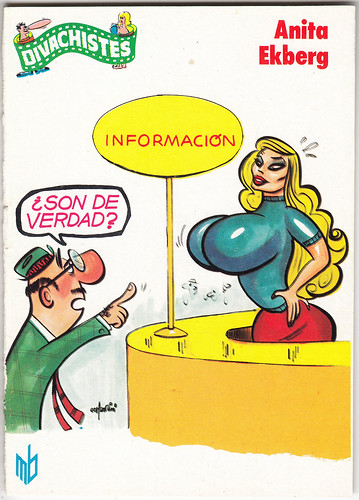 The postcards in this series were produced in the mid-1970s for the Spanish men’s magazine 'Divachistes' and always emphasized the female stars’ sexy side. All of them have one uneven border, which indicates that they were bound to the magazine and that they were tear-off postcards. Unfortunately, I’ve not been able to decipher the caricaturist’s name which looks like Mongini or Mancini. 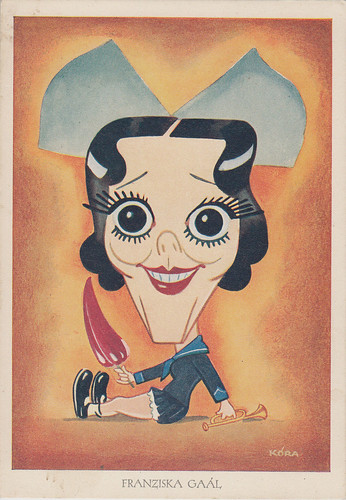 Ferdinand Körber a.k.a. Kora (1897-1953) notably worked for the communist Austrian newspaper 'Volkstimme'. On a lighter side, he also made funny caricatures of film stars in the 1930s. 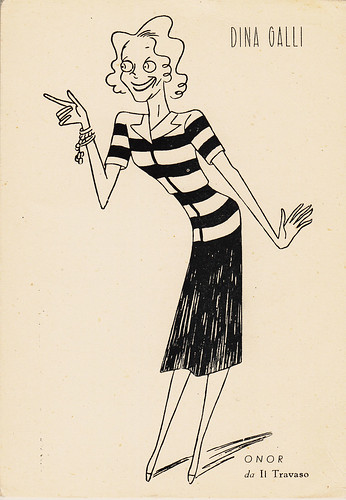 Umberto Onorato a.k.a. Onor (1898-1967) was a noted Italian caricaturist of stage and movie stars and notably worked for magazines such as 'Il Dramma' and 'Il travaso delle idee'. 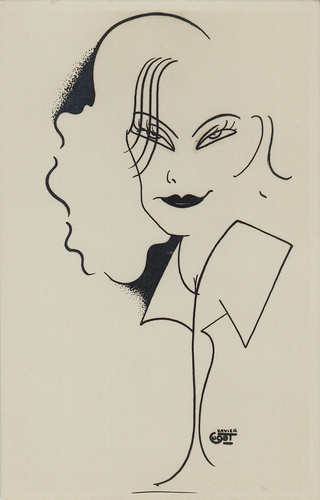 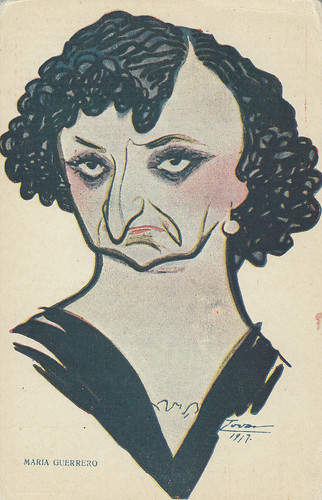 Spanish artist Manuel Tovar Siles (1875-1935) won fame as a caricaturist and notably worked for magazines such as 'La Novela Teatral'. 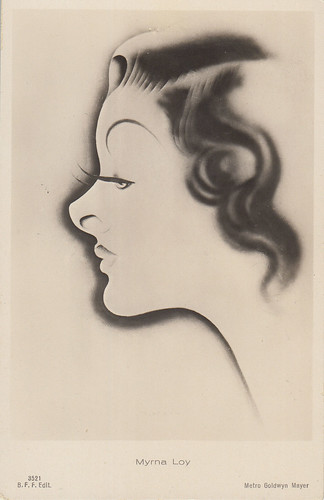 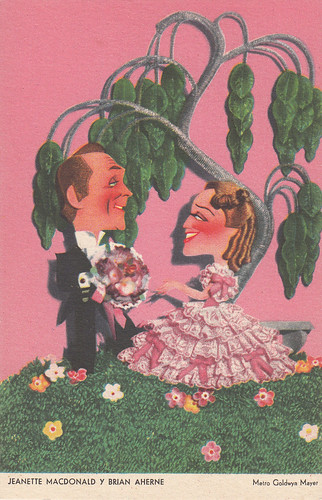 Born in Romania, Jacques Kapralik (1906-1960) emigrated to the U.S.A. in 1936. This talented and inventive artist created intricately cut-out miniature figures which were then photographed against painted backgrounds, to give them a 3-D effect. Kapralik worked for many Hollywood film studios, such as Universal and M.G.M. 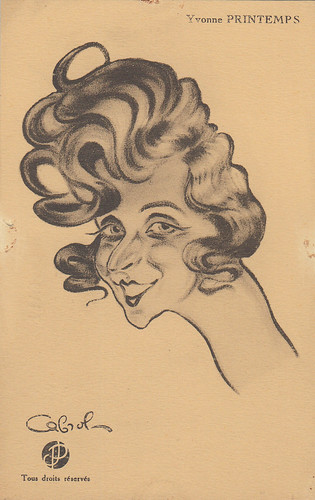 Raoul Cabrol (1895-1956) was one of the most famous French caricaturists of his time. For the record, one of his caricatures of Hitler published in a Luxembourg newspaper in 1938 caused a fit of rage from the German dictator. 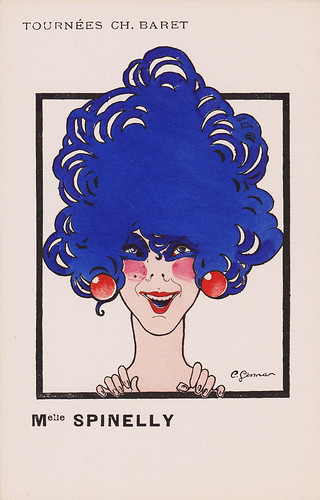 Charles Gesmar (1900-1928) had a short but brilliant career as a poster designer, illustrator, and costume designer. 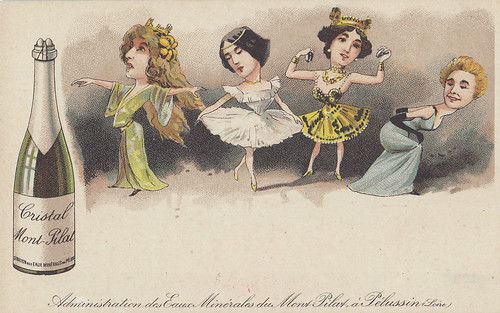 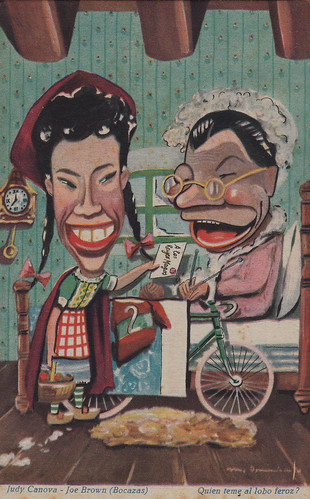 Judy Canova is dressed as the Little Red Riding Hood and Joe E. Brown plays the part of the Wolf disguised as the grandmother. Judy Canova and Joe E. Brown, who was nicknamed “Bocazas” (Big Mouth) in Spain, starred together in Chatterbox (1943). The artist’s name could be 'Domingo', 'Dimingo', 'Diminyo', or any other variation. I can’t be sure as the signature is quite cryptic.

More? Check out our post of last week on film star caricatures from Germany and Italy or this earlier post.