On Thursday 18 April 2017, French film actress Yvonne Monlaur has passed away. She starred in several European film productions of the late 1950s and 1960s. The glamorous French starlet is best known for her roles in a few Hammer horror films. 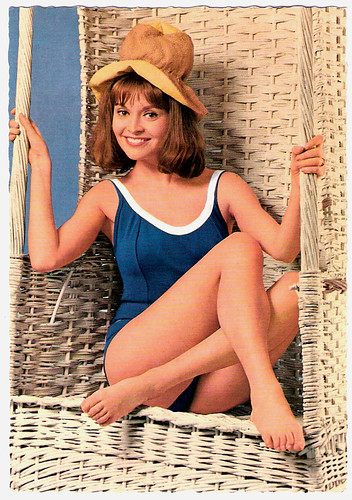 Yvonne Monlaur was born Countess Yvonne Thérèse Marie Camille Bedat de Monlaur in Pau, France in 1939. Her father was a White Russian count and her mother was a ballet dancer, who had great plans with her daughter. Yvonne followed her mother's footsteps and took ballerina lessons.

She eventually worked as a teenage model for magazines like Elle, when director André Hunebelle discovered her. He gave her small parts in his films Treize à table/Thirteen at the Table (André Hunebelle, 1955) with Micheline Presle, and Mannequins de Paris/Mannequins of Paris (André Hunebelle, 1956) starring Madeleine Robinson. She then had a supporting part in the Fernandel comedy Honoré de Marseille/Honoré from Marseille (Maurice Régamey, 1956).

Then Italian director Franco Rossi called her to Rome for the Italian-Spanish co-production Amore a prima vista/Love at First Sight (Franco Rossi, 1958) starring Walter Chiari. She appeared in more Italian films such as Non sono più Guaglione/I am not Guaglione anymore (Domenico Paolella, 1958) with Sylva Koscina, and Tre straniere a Roma/Three Strangers in Rome (Claudio Gora, 1958) with Claudia Cardinale in one of her first leading roles.

That year Monlaur was also spotted by the British producer Anthony Hinds. He asked to come to England to play in the an episode of the TV series Women in Love (1958) with George Sanders as the host.

In 1959 she suddenly seemed to be ‘hot’ all over Europe. In France a Paris magazine voted her the year's sexiest screen newcomer, in Great Britain she was featured with a four-page pictorial in the September issue of Male magazine and in Italy she is on the cover of a June issue of Tempo magazine and an Italian newspaper called her 'the year's most promising actress'. But during the shooting of the comedy Avventura a Capri/Adventure on Capri (Giuseppe Lipartiti, 1959) she had a serious accident. She suffered bad facial burns in a speedboat accident, resulting in months of recovery at a hospital. 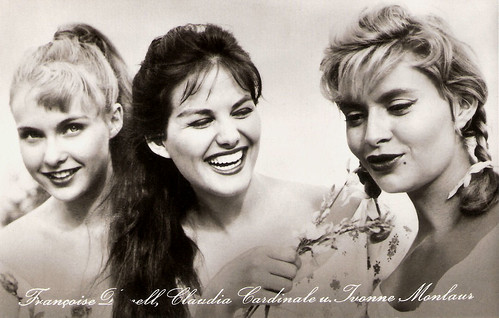 In 1960 Yvonne Monlaur travelled, accompanied by her mother, to England for a series of films. First she co-starred in the comedy Inn for Trouble (C.M. Pennington-Richards, 1960). Then followed the Hammer horror film The Brides of Dracula (Terence Fisher, 1960). She was introduced in the trailer as 'the latest sex kitten from France'.

Hal Erickson writes at AllMovie: “One of the best of the Hammer horrors, Brides of Dracula stars Peter Cushing as tireless vampire hunter Dr. Van Helsing. Though Drac himself doesn't make an appearance, his influence is felt thanks to teenaged bloodsucker Baron Meinster (David Peel). The baron's loving mother (Martita Hunt) shelters her son from harm, all the while scouring the countryside for potential female victims. When misguided schoolteacher Marianne (Yvonne Monlaur) falls in love with young Meinster, Van Helsing is forced to take drastic measures to show her the error of her ways. Excellent (and very bloody) special effects highlight this sumptuous production.”

In Circus of Horrors (Sidney Hayers, 1960), this time produced by Amalgamated studios, Monlaur appeared alongside Donald Pleasance and Anton Diffring as a deranged German plastic surgeon.

She played a Chinese lady in the Hammer production The Terror of the Tongs (Anthony Bushell, 1961) with Christopher Lee as the vicious leader of a Chinese Tong gang operating in 1910 Hong Kong. Hal Erickson describes it as “a gory, garishly colored melodrama written by Jimmy Sangster in the tradition of the Fu Manchu films.”

Back in Italy she had a small part in the romantic comedy It Started in Naples (Melville Shavelson, 1960) starring Clark Gable and Sophia Loren.

She continued to work in England too and appeared in Time to Remember (Charles Jarrett, 1962), one of a series of second feature films based on Edgar Wallace novels released in the UK between 1960 and 1965. 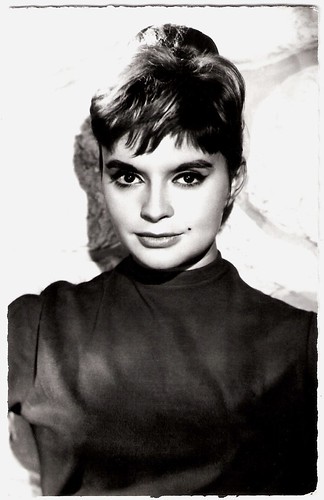 In France Yvonne Monlaur played a supporting part in Lemmy pour les dames/Ladies’man (Bernard Borderie, 1962), one of the cult action films starring Eddie Constantine which were based on the crime novels by Peter Cheney.

She stayed in France for the crime comedy À cause, à cause d'une femme/Because of a Woman (Michel Deville, 1963) with Jacques Charrier and Mylène Demongeot, and the crime potboiler Le concerto de la peur/Night of Lust (José Bénazéraf, 1963) with a fabulous free-jazz score by Chet Baker.

The latter was a thriller about two rival mobsters who fight for control of the local drug traffic. The film also included a lesbian nightclub act, which was featured prominently on the international posters.

Monlaur then screentested for the role of Domino Derval in the James Bond film Thunderball (Terence Young, 1965). In his book The James Bond Films (1981), author Steven Jay Rubin features a picture of Monlaur posing in a 'Domino' bathing suit. The role eventually went to another French actress, Claudine Auger.

Since then she attended film conventions, and wrote on her official Yvonne Monlaur blog, on which she shared memories of her 1960s Hammer films and other Eurospy and action films. Yvonne Monlaur died of cancer. She was 77.