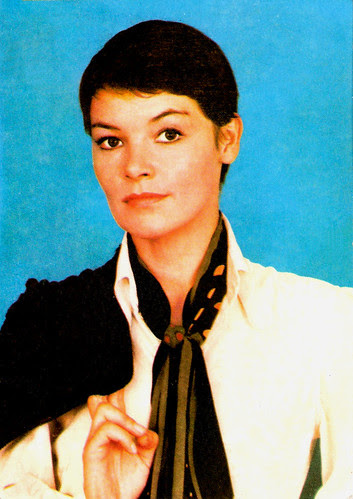 Blazing Intelligence, Sexual Challenge and Abrasiveness
Glenda May Jackson was born in Birkenhead on the Wirral, England, in 1936. Her father was a bricklayer. Jackson was educated at the West Kirby County Grammar School for Girls. She graduated from school at 16 and worked for two years in a Boots chemist shop. However, she found this boring and dead-end. She wanted better for herself. Her life changed forever when she was accepted into the prestigious Royal Acadamy of Dramatic Art (RADA) at the age of 18. Her work impressed all who observed it. Jackson made her professional stage debut in Terence Rattigan's Separate Tables in 1957. She was a member of the Dundee Repertory Company in the early 1960’s alongside Edward Fox, Michael Culver and Nicol Williamson. She made her film debut as a singer at a party in the British New Wave drama This Sporting Life (1963, Lindsay Anderson), starring Richard Harris. After ten years of scraping by, she was invited to join the Theatre of Cruelty, an offshoot of the Royal Shakespeare Company. She was cast as Charlotte Corday in Peter Brook's internationally award-winning The Persecution and Assassination of Jean-Paul Marat as Performed by the Inmates of the Asylum of Charenton Under the Direction of the Marquis De Sade (aka Marat/Sade), written by Peter Weiss. For this part she was nominated for a Tony Award as Best Supporting or Featured Actress (Dramatic). Jackson also appeared in the controversial film version, Marat/Sade (1967, Peter Brook), featuring Patrick Magee. According to the anonymous biographer at IMDb, Jackson “is acknowledged to have stolen the show”. Her first starring film role came in the offbeat drama Negatives (1968, Peter Medak). It was followed by a starring role in the 1920’s romance Women in Love (1969, Ken Russell), based on a scandalous novel by D.H. Lawrence. For her role opposite Alan Bates she won her first Academy Award for Best Actress. Brian McFarlane in Encyclopedia of British Film: “Her blazing intelligence, sexual challenge and abrasiveness were at the service of a superbly written role in a film with a passion rare in the annals of British cinema.” Another controversial role followed as Tchaikovsky's (Richard Chamberlain) nymphomaniac wife in The Music Lovers (1970, Ken Russell). Both roles added to her image of being prepared to do almost anything for her art. She worked again with Russell on the musical comedy The Boy Friend (1971, Ken Russell), although her part was only an uncredited cameo. 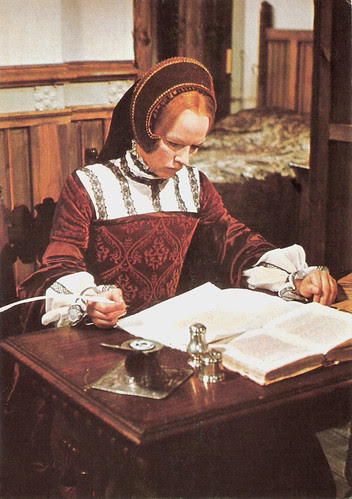 British postcard by British Broadcasting Corporation, no. 1, 1971. Photo: still of Glenda Jackson as Elizabeth I in the BBC TV series Elizabeth R (1971). 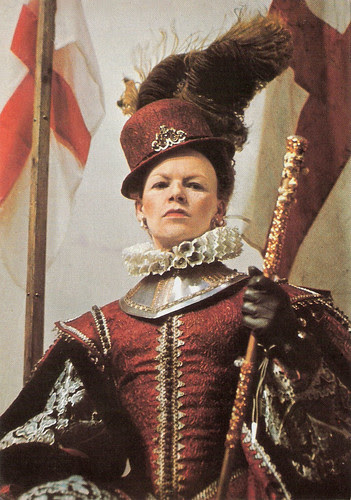 British postcard by British Broadcasting Corporation, no. 6, 1971. Photo: still of Glenda Jackson as Elizabeth I in the BBC TV series Elizabeth R (1971).

Controversial Reputation
In the early 1970’s, Glenda Jackson was much in demand. In Sunday Bloody Sunday (1971, John Schlesinger), she played a divorced businesswoman in a dead-end affair with a shallow bisexual artist (Murray Head). The film turned out to be another major success. She won the BAFTA Award for Best Actress in a Leading Role and was again nominated for the Academy Award. She confirmed her controversial reputation by having her head shaved in order to play Queen Elizabeth I of England in the BBC's blockbuster serial, Elizabeth R (1971). Jackson received two Emmy Awards for her work. She also portrayed Queen Elizabeth in the film Mary, Queen of Scots (1971, Charles Jarrott) opposite Vanessa Redgrave. For this role she won David di Donatello for Best Actress. She appeared on the popular comedy series Morecambe and Wise Show (1971), playing Cleopatra in a very funny comedy sketch. This led to many other appearances on the show, including the Christmas Shows of 1971 and 1972. American Filmmaker Melvin Frank saw Glenda Jackson’s comedic potential and offered her the lead female part in A Touch of Class (1973, Melvin Frank), co-starring George Segal. Her funny performance earned her a second Academy Award as Best Actress, plus a Golden Globe. Curiously she was not present to receive either of her Oscars. By then, she was recognized as one of Britain's leading actresses. She was praised for her high intelligence and meticulous approach to her work. Jackson refused obvious commercial roles and sought out serious artistic work. In the following years she played such roles as Solange in The Maids (1974, Christopher Miles) with Susannah York, Hedda Gabler in Hedda (1975, Trevor Dunn) and Sarah Bernhardt in The Incredible Sarah (1976, Richard Fleischer). For these impressive portrayals she was again nominated for major awards, and she took several of them home. In 1978, she was made a Commander of the Order of the British Empire (CBE). Sandra Brennan at AllMovie: “On stage, screen, and television, powerhouse actress Glenda Jackson displayed a fierce intelligence and a brazen toughness that have bordered on abrasiveness. With her sharp facial features, Jackson is more handsome than glamorous, but this has only helped her career in that it provided her the opportunity to play a wide variety of strong-willed, smart, and sexy women.” 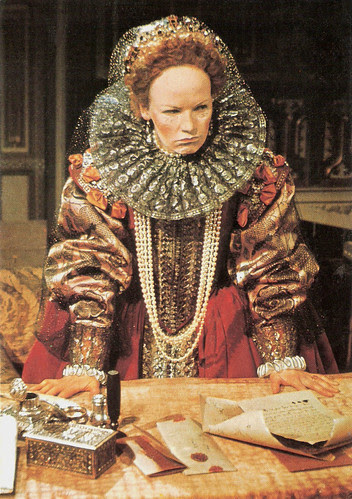 British postcard by British Broadcasting Corporation, no. 7, 1971. Photo: still of Glenda Jackson as Elizabeth I in the BBC TV series Elizabeth R (1971).

Passionate About Politics
During the 1980’s, Glenda Jackson often worked for television. She portrayed actress Patricia Neal in The Patricia Neal Story (1981, Anthony Harvey, Anthony Page) with Dirk Bogarde as Neal’s husband Roald Dahl, and Yelena Bonner in Sakharov (1984, Jack Gold) starring Jason Robards as Bonner’s husband, the imprisoned Russian nuclear scientist and dissident Andrei Sakharov. For both parts she was again nominated for an Emmy award, but both times she did not win. She was one of the most fondly remembered later guest stars on The Muppet Show because she told the producers that she would perform any material they liked; this turned out to be a role where she has a delusion that she is a pirate captain who hijacks the Muppet Theatre as her ship. She continued to make interesting films, including The Return of the Soldier (1982, Alan Bridges) with Julie Christie, and Turtle Diary (1985, John Irvin), but both were modest successes. In 1989, she appeared in Ken Russell's The Rainbow, playing Anna Brangwen, mother of Gudrun, the part which had won her her first Academy Award. Jackson retired from acting in order to focus on public affairs. She had grown up in a household that was staunchly supportive of the Labour Party, and throughout her adult life, Jackson has been passionate about politics. After the 1992 general election she became a Member of Parliament (MP) for Labour, and has been a MP since then. After the 1997 general election, she was appointed a junior minister in the government of Prime Minister Tony Blair, with responsibility for London Transport, a post she resigned before an attempt to be nominated as the Labour Party candidate for the election of the first Mayor of London in 2000. The nomination was eventually won by Frank Dobson, who lost the election to Ken Livingstone, the independent candidate. After constituency changes for the 2010 general election, her majority of 42 votes was one of the closest results of the entire election. In June 2011, Jackson announced that, presuming the Parliament elected in 2010 lasts until 2015, she would not seek re-election. She explained "I will be almost 80 and by then it will be time for someone else to have a turn". Glenda Jackson was married to former stage actor and designer Roy Hodges from 1958 until their divorce in 1976. They have a son, Daniel Hodges (1969) who is a Labour advisor and commentator.

She was a truly fearless actress. Caring much more about the work than her image. Enjoyed the read.