Maurice de Féraudy (1859-1932) was an actor of the Comédie-Française and a French director. He was also a notable actor and director in French silent cinema. 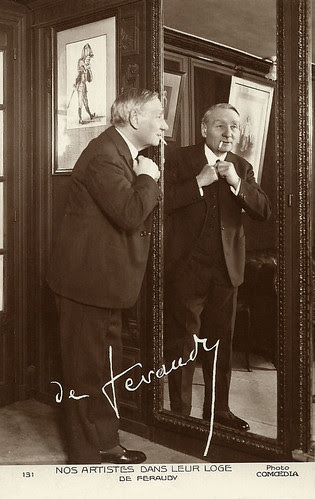 A Pupil Of GotDominique Marie Maurice de Féraudy was born in Joinville-le-Pont near Paris in 1859. His father was the commander of the Ecole militaire de gymnastique at Joinville-le-Pont. After the Conservatoire, where he was a pupil of Got, Maurice entered the Théâtre Français in 1880. He became ‘sociétaire’ of the Comédie-Française in 1887, and ‘doyen’ (dean) in 1929, but he left that same year. He was much acclaimed as comedian, because of his performances full of gaiety. The role of his life, which he performed some 1,200 times in within 30 years – and had the monopoly on it – was that of Isidore Lechat in Les affaires sont les affaires (Business is business) by Octave Mirbeau (1903). Other plays he acted in were by a.o. Bataille, Kistemaekers, Guitry, Ibsen, but also classics by Molière, Balzac and Dumas fils. Between 1896 and 1905, Féraudy taught at the Conservatoire, training upcoming actors like Gabriel Signoret. Féraudy also wrote numerous songs for Paulette Darty, such as the famous Fascination (1901), reprised afterwards by Suzy Delair and Diane Dufresne. He was the father of Jacques de Féraudy (1886-1971), who became an actor as well. 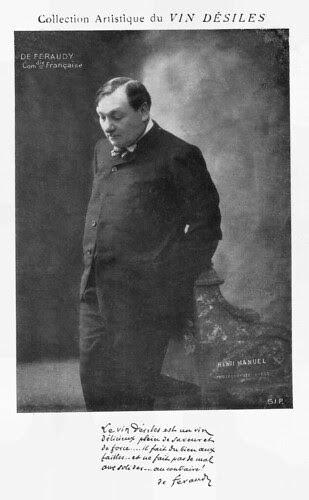 Memorable Roles
In 1908-1909, Maurice de Féraudy debuted in the cinema. He directed almost 40 shorts under the aegis of his short-lived company Théâtro-Films. His son Jacques debuted in two of these films, Simple histoire/Simple story (1908) and Georgette (1908). Afterwards Féraudy directed a handful of mostly short films at Pathé and Gaumont, with actors who would later become famous, such as Albert Dieudonné, Roger Karl, Maria Falconetti and Jean Angelo. Féraudy last’s direction was the film Après lui (1918) in which he had the lead himself. While most of the films he directed are forgotten now, better known are the films in which he acted. In the 1910's Féraudy played in films at Eclair, such as Les gaités de l’escadron/The gaiety of the squadron (1913, Joseph Faivre, Maurice Tourneur), La dame de Monsoreau/The lady Monsoreau (1913, Emile Chautard), and Monsieur Lecoq (1914, Maurice Tourneur). In the 1920's Féraudy enjoyed the pleasure of playing memorable roles despite his high age. After supporting roles in two films with René Hervil: L’ami Fritz/In Old Alsace (1921) and Blanchette (1921), both with Léon Mathot in the lead, Féraudy had the male lead himself together with young Jean Forest in Crainquebille/Coster Bill of Paris (1922,  Jacques Feyder). In this adaptation of a novel by Anatole France, Féraudy played an aging street vendor who has worked all his life at Les Halles in Paris. Innocently he lands in jail and loses his customers once released, thus becoming an alcoholic. A young street boy (Forest) prevents him from suicide, though, convincing him to start all over again. Next Féraudy played the title role in the Balzac adaptation Cousin Pons (1923, Jacques Robert), about a musician and poor art collector who is befriended with a sympathetic German (André Nox). The human vultures around him, such as his wealthy parvenu lawyer cousins and his landlady, realize that he possesses a valuable art collection, and try to crush poor Pons. 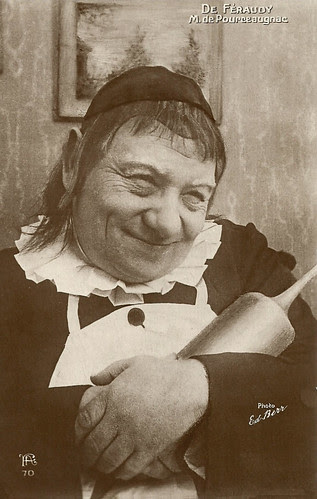 French postcard. Photo: Ed. Berr. PA, no. 70. Publicity still of Maurice de Féraudy as the apothecary in the Molière comedy Monsieur de Pourceaugnac. This part had been his breakthrough in 1887.

Cleared From Slander
Maurice de Féraudy next played in Le secret de Polichinelle/The Secret of Polichinelle (1923, René Hervil) about a young man who wants to marry a working class girl (Andrée Brabant) against the wishes of his parents, Le Coeur des gueux/Heart beggars (1925, Alfred Machin, Henri Wulschleger) with Ginette Maddie, the Danish film Klovne/The Clownn (1926, Anders Sandberg) with Gösta Ekman and Karina Bell, Lady Harrington (1926, Fred Leroy-Granville,  H.C. Grantham-Hayes) with Claude France and Warwick Ward, Fleur d’amour/Love Flower (1927, Marcel Vandal) in which Féraudy had the male lead opposite Rose Mai, and the German film Die Hölle von Montmartre/The Hell of Montmartre (1928, Willy Reiber, Franz Seitz) with Eric Barclay and Suzy Vernon. A last memorable part was Féraudy’s role in the tragicomedy Les Deux timides/Two Timid Souls by  (1928, René Clair) in which Pierre Batcheff plays Frémissin, a timid young lawyer who loves Cécile (Vera Flory) whose father (Féraudy) suffers from the same timidity. When because of his weak defence a brutal husband is sentenced, the latter (Jim Gérald) uses all means to wreck the young lawyer’s own future marriage with Cécile, as he wants her for himself. Helped by his future father-in-law, Frémissin triumphs and clears his father-in-law and himself from all slander. After one last part in the early French sound film Ça aussi! … c’est Paris/That too! This is Paris (1930, Antoine Mourre), Féraudy retired. He still acted on stage, and was even highly sucessful in Cette vieille canaille in 1931-1932. Maurice de Féraudy died in Paris in 1932 and was buried at the cemetery of Montparnasse. 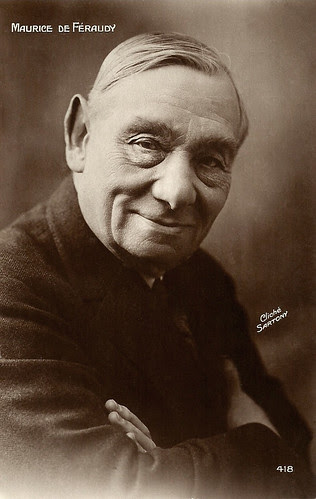