Italian actress Edy Darclea (1895 - ?) was active in Italian and foreign silent cinema in the late 1910's and early 1920's. She appeared in several biblical epic spectacles. 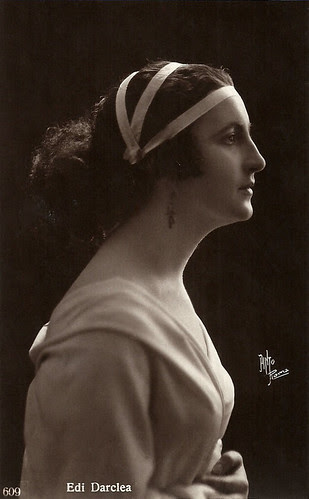 Gay Telephone Girl
Edy Darclea (also Edi Darclea) was born as Iole De Giorgio in Rome in 1895. Her father Alfredo De Giorgio had been a singer from Naples, who became a singing master in the American city of Baltimore. There he married Conception Walsh, originally Irish and educated in a college in Monza, Italy. They had four children, Amerigo (1891) and Maria (1892), born in Baltimore, and Edoardo (1893) and Iole (1895), both born in Rome, where the family had moved to in the mid-1890's. De Giorgio pursued his teaching career but also became a notable amateur photographer, specialised in stereoscopic photography. His rich collection can still be found in Rome at the Istituto centrale per il catalogo e la documentazione. Iole’s brother Amerigo started to act in the same year as his sister: 1917. While he kept his name Amerigo De Giorgio (also written as Americo De Giorgio (IMDb’s version) and Amerigo Di Giorgio), Iole changed her name into Edy Darclea. Iole and her brother played together in many films between the late 1910's and early 1920's, mainly in Italy, but in the mid-1920's also in Germany and the US. Darclea debuted in La duchessa del Bal Tabarin/The Duchess of Bal Tabarin (1917, Bob aka Nino Martinengo), in which she played a gay telephone girl who competes with a duchess for the hand of a nice young man. The film, based on a popular operetta, was an early attempt to synchronize sound with records, so Darclea might well have sung in the film, educated by her father. Darclea's first films were directed by various directors like Martinengo, Alexandre Devarennes, and Giuseppe De Liguoro. In 1919 she did two films with Romolo Bacchini, L’ombra fatale/The fatal shadow (1919) and Via Crucis/Way of the Cross (1919) with Elena Sangro. In the following years, she worked four times with prolific director Augusto Genina: Debito d’odio/A Debt of Hate (1920), La ruota del vizio/Conscience (1920) with Bruto Castellani, La crisi/The crisis (1921) and I diabolici/The evil (1921). 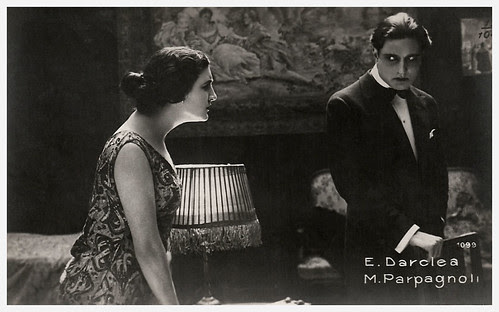 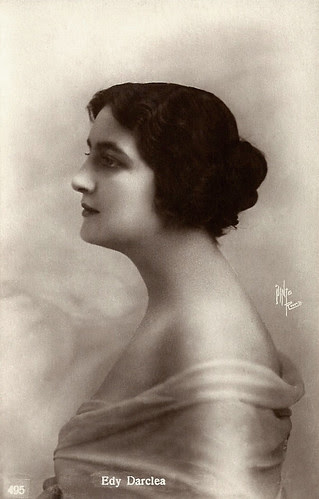 Big-Budget Spectacles
During the 1920's, Edy Darclea was casted in various epic spectacles. She had already acted in Enrico Guazzoni’s early 'kolossal' La Gerusalemme liberata/Jerusalem Liberated (1918), together with Amleto Novelli, Elena Sangro, and Edy’s brother Amerigo. In 1922 she played Acte, the first mistress of Emperor Nero (Jacques Grétillat)in the American production Nero/Nerone (1922, J. Gordon Edwards). Janiss Garza writes at AllMovie: "The Fox studio wasn't known for its big-budget spectacles, but when it needed to, it could really come through, as proven here. Director J. Gordon Edwards spent eight months in preparation and a couple of months in Italy filming the story of the last of the Caesars - quite a long time in those days. Except for Violet Mersereau, who played the part of the Christian heroine Marcia, the whole cast was made up of Italian actors (appropriate, considering that the film was about ancient Rome). For the most part, Edwards made good use of the 11 reels it took to tell Nero's story, showing off the immense Circus Maximus, the eruption of Mount Vesuvius, and giving heated life to the burning of Rome (accomplished with a combination of miniatures and full-size sets)." The success of the film lead to more parts in historical films for Darclea. First she played in Edwards’ epic The Shepherd King (1923, J. Gordon Edwards), starring Nerio Bernardi as (King) David. Janiss Garza at AllMovie: "After being made into a stage play by Wright Lorimer and Arnold Reeves, the Old Testament story of David was adapted for the screen. Director J. Gordon Edwards spent over a year in Palestine, Jerusalem and Egypt filming, with a primarily Italian cast. Unfortunately all this effort was in vain, as there were too many title cards and not enough thrills. In addition, it had heavy competition due to the concurrent release of Cecil B. DeMille's The Ten Commandments." It culminated in the title role of Manfred Noa’s epic, two-part German production Helena/Helen of Troy (1924), shot at the Bavaria Studios in Munich. Helen is adored by her husband Menelaos (Friedrich Ulmer) and by his rival Achilles (Carlo Aldini). But eventually she falls in love and elopes with Paris of Troy (Vladimir Gajdarov), thus causing war between the Greeks and the Trojans. When Achilles’ buddy Patroklos (Carl Lamac) is killed wearing Achilles’ armour, Achilles kills the culprit, Hektor (Carl De Vogt). Then Achilles is killed himself at his only weak spot, his Achilles heel. Eventually the Greeks invade Troy, misleading the Trojans by using a giant horse filled with soldiers. Paris is killed but Menelaos spares his infidel wife. After Helena, Darclea played in one more silent film, Da Icaro a De Pinedo/From Icarus to De Pinedo (1927, Silvio Laurenti Rosa), a series of tableaux on the Italian conquest of the air, from Icarus and Leonardo to modern aviators like De Pinedo. The film was her swan song. Nothing more is known about Edy Darclea, not even the date and place of her death.