Glamorous French beauty Nicole Maurey (1926-2016) appeared in 65 film and television productions between 1944 and 1997. She flirted with Hollywood stardom in the 1950s, co-starring with Bing Crosby in Little Boy Lost (1953) and Danny Kaye in Me and the Colonel (1958). She probably remains most noted as Charlton Heston's leading lady in Secret of the Incas (1954), often cited as the primary inspiration for Raiders of the Lost Ark (1981). 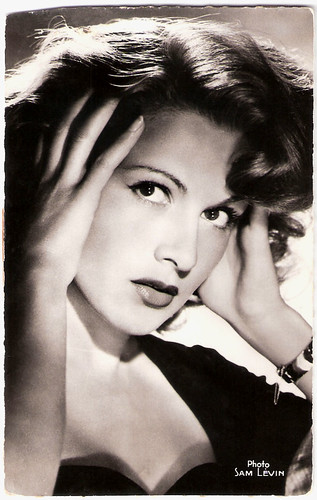 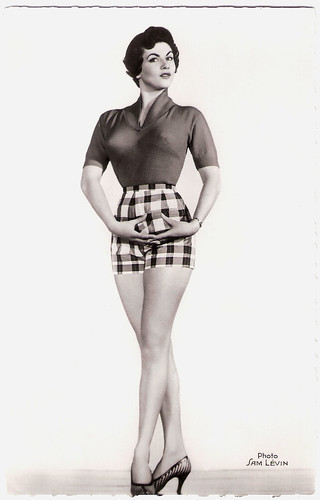 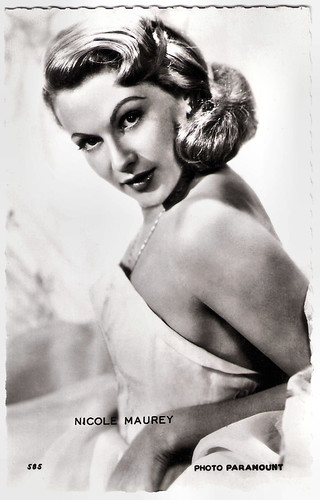 
Nicole Arlette Maurey was born in Bois-Colombes, a northwestern suburb of Paris, in 1926. Her father was an architect, her mother a housewife. She had one sister. Besides going to school, she took ballet lessons. She entered as a ‘petit rat’ at the Paris Opera, but her family preferred a career in the theatre. So she took drama lessons at the Cours d'Art Dramatique from Maurice Escande.

An important film on her résumé is Journal d'un curé de campagne/Diary of a Country Priest (1951) directed by Robert Bresson. It tells the story of an inexperienced and frail priest (Claude Laydu), who has just arrived in his first parish, a village in northern France, where he is not welcome. He tries to fulfill his duties even as he fights a mysterious stomach ailment.

The film won eight international awards, including the Grand Prize at the Venice International Film Festival, and the Prix Louis Delluc. It was a financial success in France and established Bresson's international reputation as a major film director. Film critic André Bazin wrote an entire essay on the film, calling it a masterpiece "because of its power to stir the emotions, rather than the intelligence." The film also had considerable influence on Martin Scorsese's Taxi Driver (1976).

Two years later, Maurey appeared in the American drama Little Boy Lost (George Seaton, 1953) about a war correspondent (Bing Crosby) stationed in Paris during World War II and once married to a French girl (Maurey) who was murdered by the Nazis. Following the war, he returns to France trying to find their son, whom he lost during a bombing raid but has been told is living in an orphanage in Paris. Filmed on location in Paris, Little Boy Lost received the Golden Globe Award for Best Film Promoting International Understanding and was also entered into the 1954 Cannes Film Festival.

Maurey was then Charlton Heston's leading lady in Secret of the Incas (Jerry Hopper, 1954), often cited as the primary inspiration for Raiders of the Lost Ark (Steven Spielberg, 1981). Secret of the Incas was filmed by Paramount Pictures on location in Peru at Cuzco and Machu Picchu, the first time that a Hollywood studio filmed at this archeological site. Five hundred native Indians were used as extras in the film, which also featured the Peruvian singer Yma Sumac. The film caused a surge in tourism to Peru in 1954. Many of the scenes in Secret of the Incas bear a striking resemblance in tone and structure to scenes from the Indiana Jones films. Heston and Maurey reprised their roles in 1954 in a Lux Radio Theater version of Secret of the Incas. 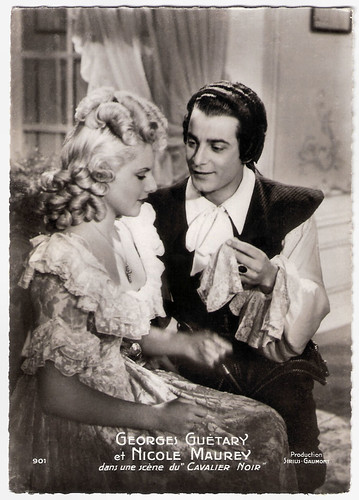 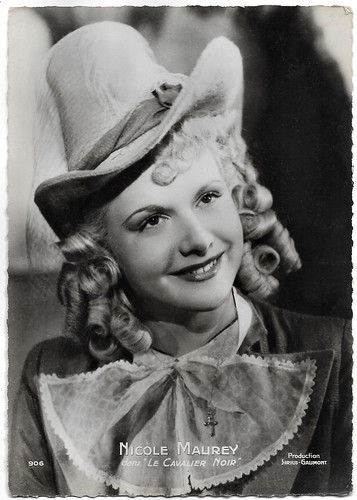 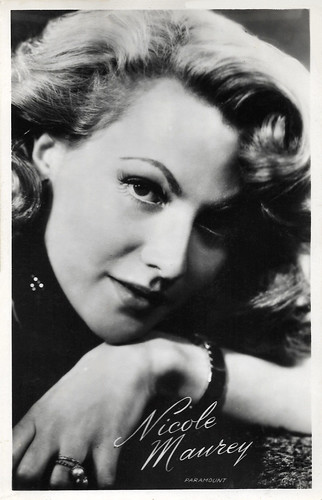 The Day of the Triffids


In the following decade, Nicole Maurey worked as well in France as internationally. In France, she was one of the many stars in the historical drama Si Versailles m'était conté/Royal Affairs in Versailles (Sacha Guitry, 1954), which portrayed the personalities who lived in the Royal Palace, the Chateau of Versailles. The following year, she also appeared in Guitry’s historical epic Napoléon (Sacha Guitry, 1955) which follows the life of Napoleon from his early years in Corsica to his death at Saint Helena.

Other French films were the crime film Section des disparus/The Missing Section (Pierre Chenal, 1956) with Maurice Ronet, and the crime comedy Action immédiate/To Catch a Spy (Maurice Labro, 1957), starring Henri Vidal. In Great Britain, she appeared in the comedy The Constant Husband (Sidney Gilliat, 1955) starring Rex Harrison. Then she co-starred in the American war film The Bold and the Brave (Lewis R. Foster, 1956), which traces the destinies of three American soldiers (Wendell Corey, Mickey Rooney, and Don Taylor) stationed in Italy during World War II. Maurey reunited with Bing Crosby in the comedy High Time (Blake Edwards, 1960), about a middle-aged widower who goes back to college, enters the world of a new generation of postwar youth and falls for professor Maurey. She settled in England and appeared pleasantly in a variety of films but without much fanfare.

Other international films were the thriller The Weapon (Val Guest, 1957) with Lizabeth Scott, the war comedy Me and the Colonel (Peter Glenville, 1958) starring Danny Kaye and Curd Jürgens, the crime film The Scapegoat (Robert Hamer, 1959) with Alec Guinness and Bette Davis, and the Western The Jayhawkers! (Melvin Frank, 1959). In 1960 she divorced Jacques L. Gallo.

One of her best-known British films is the Science-Fiction classic The Day of the Triffids (Steve Sekely, 1962) based on the novel by John Wyndham. Triffids are plants with a deadly sting that are able to uproot themselves, walk and even communicate. Craig Butler at AllMovie: “Although it takes entirely too many liberties with the excellent novel upon which it is based, The Day of the Triffids is generally an entertaining sci-fi romp. It has many of the classic (some might say clichéd) elements often associated with the genre - an alien invasion, stalwart hero, rag-tag band of allies, and a race against time to save the entire planet.” 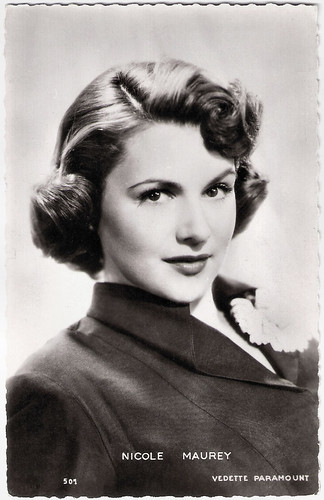 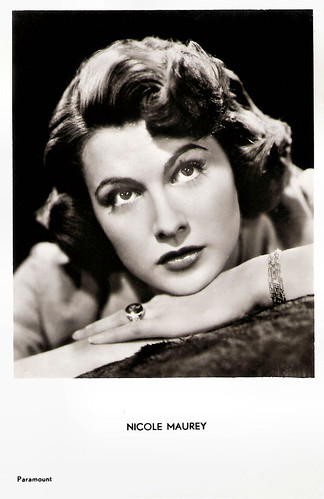 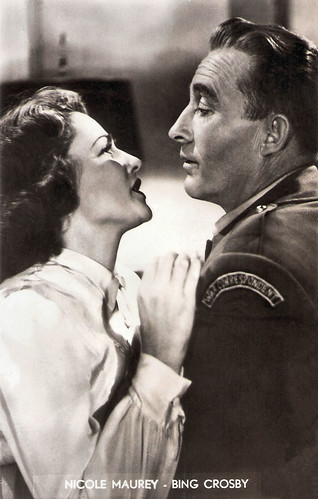 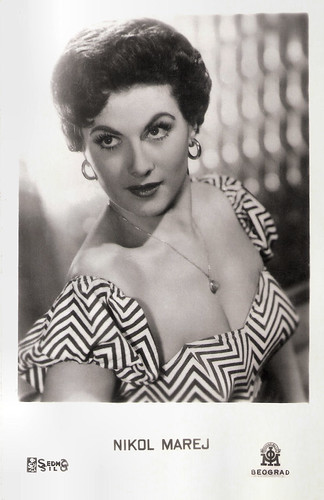