Helga Molander (1896 – 1986) appeared in several German silent films. She often worked with her partner, producer and director Max Glass. After the rise of the Nazis, the Jewish actress had to go in exile. 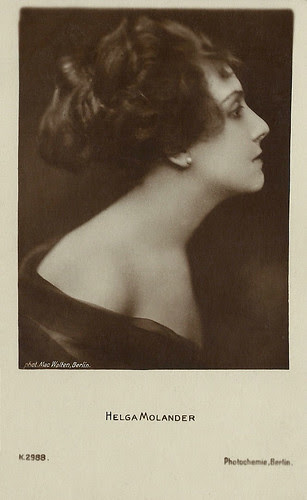 The Handsomest Man Of The Baltic Coast
Helga Molander was born as Ruth Werner in Königshütte, Germany (now Chorzów, Poland) in 1896. At 20, she fell in love with a nightclub entertainer who was once voted ‘handsomest man on the Baltic coast’, according to Wikipedia. She got pregnant and gave birth to a son, Hans Jürgen. The boy was brought up by his grandmother, who was a fervent Catholic, though of Jewish ancestry. She later died in a concentration camp. Helga Molander began her artistic career in 1918 at the Trianon Theater in Berlin. She was a success, and could also make her film debut that year. Among her first films were Verlorene Töchter/Lost Daughters (1918, William Kahn) and Im Zeichen der Schuld/In the sign of guilt (1918, Richard Eichberg) with Bruno Dercarli. The following year she played with Conrad Veidt in the groundbreaking drama Anders als die Anderen/Different from the Others (1919, Richard Oswald). The film was based on a script by Richard Oswald and physician and sexologist Magnus Hirschfeld, who was an outspoken advocate for sexual minorities. Raff-10 at IMDb: “It was banned after a short run in Germany where theatergoers were harassed at showings. It seems very brave of Conrad Veidt and the makers of the film to make a sympathetic, sexually charged film about homosexuals in 1919. The story is about a man who is blackmailed after making advances on a stranger he meets at a men only dance.” During the 1920’s, Molander performed in a number of silent films. These films include Feindliches Blut/Enemy blood (1920, Willi Achsel, Klaus Fery) with Eugen Klöpfer, Sappho/Mad Love (1921) with Pola Negri, Der Alte Gospadar/The old Gospodar (1922, Rolf Randolf) starring Ernst Deutsch, Die drei Portiermädel/The three girl porters (1925, Carl Boese) with Hanni Weisse and Maly Delschaft, and the historical drama Königin Luise/Queen Luise (1927, Karl Grune) featuring Mady Christians. Molander played major roles for Berlin film producer and director Max Glass in Der Mann mit der Eisernen Maske/The Man with the Iron Mask (1922, Max Glass) and Bob und Mary/Bob and Mary (1923, Max Glass). Glass was the head of Terra Film, for which Molander often worked. According to German journalist Georg Fuchs, Terra Film owed its rise to international recognition to Glass. He was sometimes nicknamed ‘the dictator of cinema’ because of his iron will. In 1928, just before the introduction of sound film, Helga Molander’s film career stopped. The reason for this is unclear. 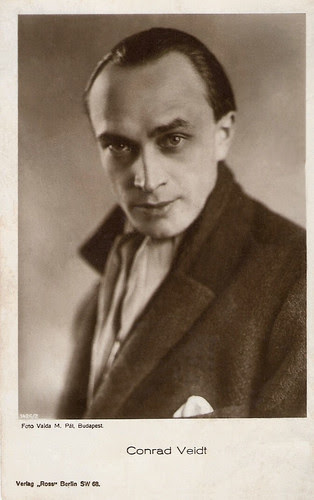 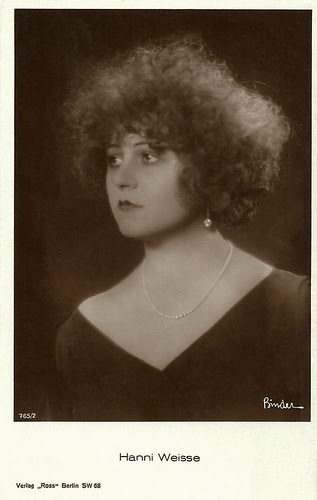 Locked Up In A French Internment Camp
With the advent of the Nazis in Germany, Helga Molander and Max Glass got in trouble and both had to flee. Not only were they both Jews, but several of the actors that appeared in Glass’ films were too, like for example Szöke Szakáll and Grete Mosheim. In 1933, Glass’ film companies in Germany were shut down and he went into exile in Paris. There Glass founded a new production company, Flora Films. According to some sources, Max Glass ‘spent a fortune’ buying his longtime friend Molander's freedom after - like most refugees from Germany - she had been rounded up by the French police and locked up in a French internment camp. For most of those who were handed over to the Nazis, this meant a prelude to Drancy, then Auschwitz. From then on Glass and Molander were a couple. In 1937 Max Glass and his two sons created a second French production and distribution company called Arcadia Films. It undertook two super-productions, La Tragédie Impériale/Rasputin (1938) with Harry Baur in the role of Rasputin, and the anti-Nazi Entente Cordiale (1939) after the novel by André Maurois. Both films were directed by Marcel L'Herbier. In 1939, a decree granted Glass and Molander their French citizenship. However, in 1942 the Vichy Government issued another decree, that stripped them of their French citizenship. But by then, they had already departed for Brazil, and then the United States. Little is known of their sojourns there. Glass seems to essentially have devoted himself to writing. After the war, they returned to France. Glass discovered that during his exile his companies, Flora Films and Arcadia Films, had been declared bankrupt and dissolved by a provisional administrator. He obtained an agreement that permitted him to recover some of the French films he had produced before the war. In 1948, Max Glass created his last company, the Max Glass Films, and produced three more feature films. In 1957, Molander and Glass finally married, after he had divorced his first wife Helene Münz. Glass died in 1965 and Molander in 1986. She was 89. Her son Hans Eysenck, was Professor of Psychology at the Institute of Psychiatry, King's College, London, and became famous for this I.Q. tests. Her grandson, Michael Eysenck is also a noted psychology professor.

What an amazing story. Quite a life. Thanks Bob/