Beautiful German-born actress Nastassja Kinski (1961) has appeared in more than 60 films. Her starring roles include her Golden Globe Award-winning portrayal of the title character in Tess (1979) and parts in Wim Wenders' films Falsche Bewegung/The Wrong Move (1975), Paris, Texas (1984) and In weiter Ferne, so nah!/Faraway, So Close! (1993). 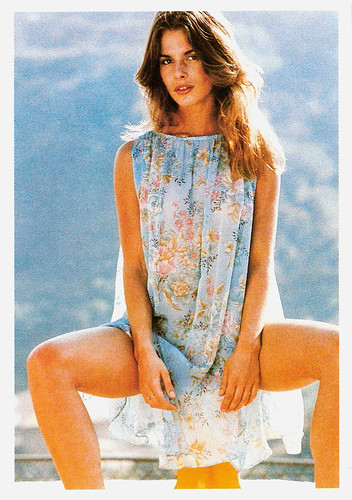 French postcard by Ebullitions, no. 502. 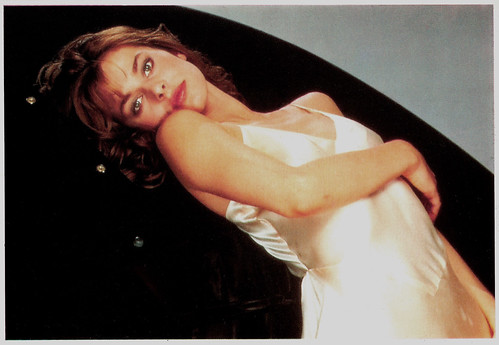 Petersen and Polanski
Nastassja Kinski was born as Nastassja Aglaia Nakszyński in Berlin in 1961 (some sources say 1964). She is the daughter of the German actor Klaus Kinski from his marriage to actress Ruth Brigitte Tocki. She is half sister to actress Pola Kinski and actor Nikolai Kinski. Her parents divorced in 1968 and Kinski rarely saw her father after the age of 10. She and her mother struggled financially and eventually lived in a commune in Munich. Her career began in Germany as a model. The actress Lisa Kreuzer placed her in the role of the dumb Mignon in Wim Wenders' film Falsche Bewegung/The Wrong Move (1975) starring Rüdiger Vogler and Hanna Schygulla. In Great-Britain she featured in the horror film To the Devil a Daughter (1976, Peter Sykes), starring with Christopher Lee and produced by Hammer Film. That year she had her first major role in an episode of the popular German TV crime show Tatort. This episode, Reifezeugnis/For Your Love Only (1977), had a feature film length and was directed by Wolfgang Petersen at the beginning of his career. Years later, after Kinski had become an international star, the TV film was released theatrically in the U.S. In 1976, Kinski was photographed for French Vogue by director Roman Polanski, and the two started a romantic relationship. She was 15 years old at the time and he was 43. In the cinema Kinski also had a May-December romance in Così come sei/Stay As You Are (1978, Alberto Lattuada) with Marcello Mastroianni. Polanski urged Kinski to study acting with Lee Strasberg, and cast her in the lead part of his film Tess (1979), based on the classic novel by Thomas Hardy. The film won three Oscars and Kinski won the Golden Globe for best newcomer. However, Derek Armstrong writes at AllMovie: “The quiet, contemplative nature of the film is echoed, although not so skilfully, in the lead performance of Nastassja Kinski. Seemingly cast more for her soulful eyes (and Polanski's budding relationship with her) than her acting, Kinski gives a tentative, one-note performance that is nearly inaudible. Still, it served to deliver her a variety of other projects and bring her limited stardom.” 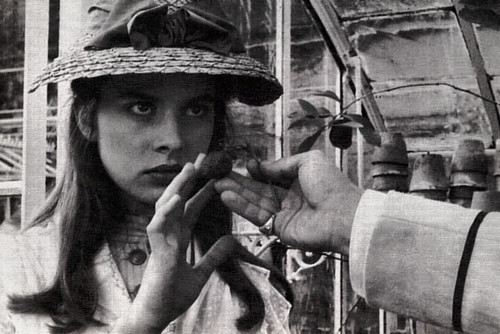 Coppola and Wenders
In 1981, director Francis Ford Coppola brought Nastassja Kinski to the U.S.A. to act for his new Zoetrope Studios. Hal Erickson at AllMovie: “Kinski became the dream of male college undergraduates everywhere by posing for a Richard Avedon poster wearing nothing but a large, live python which spiralled around her body.“ The first Zoetrope production, One From the Heart (1982, Francis Ford Coppola), starring Frederic Forrest, Teri Garr and Kinski, failed at the box office and was a major loss for Coppola's new studio. In 1982, she also appeared in the erotic horror film Cat People (1982, Paul Schrader), which also was not successful commercially. Kinski then split her time between Europe and the United States. In France she filmed La lune dans le caniveau/Moon in the Gutter (1983, Jean-Jacques Beineix) with Gérard Dépardieu. In Germany she played Clara Wieck in the biography Frühlingssinfonie/Spring Symphony (1983, Peter Schamoni) opposite Herbert Grönemeyer as composer Robert Schumann. In Italy she co-starred with Rutger Hauer in In una notte di chiaro di luna/On a Moonlit Night (1989, Lina Wertmüller). And in the U.S. she co-starred with Rudolph Nureyev in Exposed (1983, James Toback), with Rob Lowe and Jodie Foster in The Hotel New Hampshire (1984, Tony Richardson), with John Savage in Maria's Lovers (1984, Andrey Konchalovskiy) and with Al Pacino in Revolution (1985, Al Pacino). Her most acclaimed film was Paris, Texas (1984, Wim Wenders) in which she played the estranged wife of Harry Dean Stanton. Mark Deming at AllMovie: “Paris, Texas may be the finest of Wim Wenders' 'road movies', a deliberately paced but deeply moving story of a man at the end of his emotional rope who is given an unexpected chance to heal both his scars and those he has inflicted on others. Harry Dean Stanton gives perhaps his finest performance - few actors could pull off a scene like the long monologue he shares with Kinski near the film's conclusion”. The film won a César and also three awards in Cannes, and was nominated however, the film was not widely released in the United States, for the Oscar. In the mid-1980’s, Kinski met Egyptian filmmaker Ibrahim Moussa. They married in 1984 and they have two children together, son Aljosha (1984) and daughter Sonja Kinski (1986). 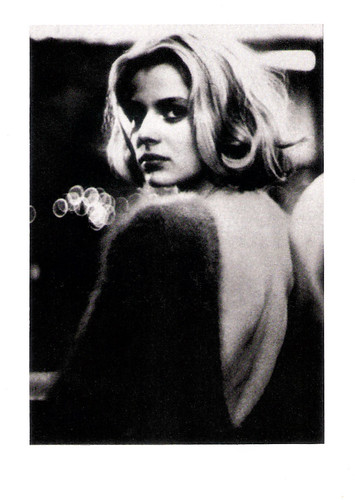 LaBute and Winterbottom
Nastassja Kinski's luck in Hollywood turned in the 1990’s when she appeared opposite Charlie Sheen in the action comedy Terminal Velocity (1994, Deran Serafian). After, her marriage with Moussa had been dissolved, Kinski lived with musician Quincy Jones till 1995. In 1993, their daughter, Kenya Julia Miambi Sarah Jones, was born. In the cinema, Kinski would tackle serious subject matter in the AIDS drama One Night Stand (1997, Mike Figgis) with Wesley Snipes, The Lost Son (1999, Chris Menges), a crime drama revolving around a network of pedophiles, and the Serbian war drama Savior (1998, Predrag Antonijevic) with Dennis Quaid. Her other film appearances include In weiter Ferne, so nah!/Faraway, So Close (1993, Wim Wenders) with Bruno Ganz, the comedy of manners Your Friends & Neighbors (1998, Neil LaBute) with Aaron Eckhardt, and The Claim (2000, Michael Winterbottom), loosely based on Thomas Hardy's novel Mayor of Casterbridge. The story, filmed in sub-zero Calgary, Canada, tells about a man (Peter Mullan) who sells his wife (Kinski) and daughter (Sarah Polley) for a gold-mining claim. Jason Clark at AllMovie: “Winterbottom subtly draws viewers into this haunting tale of family regained and the power of greed by letting them take in the details through small gestures.” In the following years Kinski played mainly in B-films and TV movies. Interesting were the French-Canadian Mini-Series Les liaisons dangereuses/Dangerous Liaisons (2003, Josée Dayan) with Catherine Deneuve and Rupert Everett, and the dark mystery Inland Empire (2006, David Lynch) with Laura Dern and Jeremy Irons. Most recently, she co-starred with Julian Sands in Il turno di notte lo fanno le stele/The Nightshift Belongs to the Stars (2012), directed by Edoardo Ponti, son of producer Carlo Ponti and Sophia Loren. Nastassia Kinski lives in Los Angeles. Her daughter Sonja Kinski works now as a model.

Such an icon of her generation. I still remember the famous poster with the snake.

Yeah, every boy had a crush on her then.