Blonde Austrian actress Gretl Berndt (1907 - ?) had a brief film career in the Austrian and German cinema of the late 1920’s and first half of the 1930’s. But her first love was and stayed the theatre. 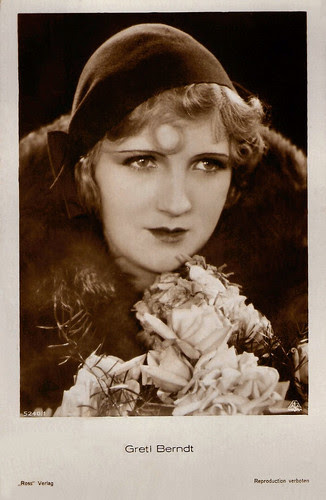 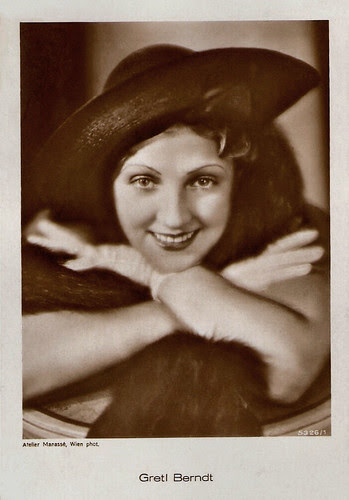 Shadows of the Past
Gretl Berndt later used the name Gretl Bernd–Larsen again. Thus she was credited in Alles für die Firma/Everything for the firm (1935, Rudolf Meinert), and ...nur ein Komödiant/Just a Comedian (1935, Erich Engel). In these later films she mainly played supporting parts. Her last film was the crime drama Schatten der Vergangenheit/Shadows of the Past (1936, Werner Hochbaum) with Luise Ullrich. About this film the Dutch site Cinema.nl writes: "A very interesting direction of a complicated script about changing identities with a courageous wink to the actual situation in Nazi-Germany. Director Hochbaum deserves to be rediscovered." Gretl Berndt then retired from the screen, but she continued with her stage work. During the Second World War, Gretl Bernd-Larsen was a featured performer at the Kabaret Don Juan in Paris during the Occupation. We could not find more information about her on the web. Is she still alife? 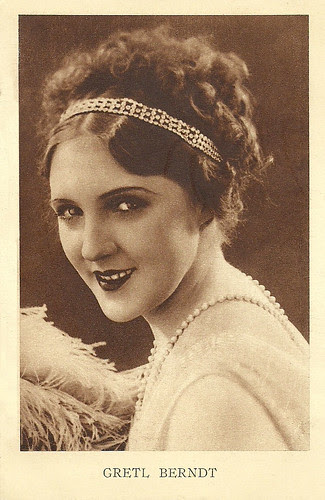 Sources: Thomas Staedeli (Cyranos), Cinema.nl (Dutch) and IMDb. Special thanks to Mary LaMarca, who provided some info on Gretl Berndt in a comment on an earlier version of this post.

Beautiful ladies. Thanks for stopping by my blog again. Nothing like old movies!
Judy

Hi,
I am currently doing research on Occupied France using German Language journals. Greta-Berndt-Larsen is the featured performer at the Kabaret Don Juan, 11 rue Fromentin (Pigalle) in Paris during the Occupation. The info comes from "Der Deutsche Wegleiter". I'm up to December 1941, and she's been consistently featured in their ads.

Hi Mary, thanks for the information. I really appreciate it. Good luck with your research project and greetings from Amsterdam, Bob