One of the 'other events' at Le Giornate del Cinema Muto 42 was the screening of a recent film by Olivier Bohler and Céline Gailleurd, Italia. Il fuoco, la cenere (2021). The film includes clips of Febo Mari (1881-1939) in Il fuoco/The Fire (1915) and Tigre reale (1916). The Italian actor, director and writer of the stage, screen and radio peaked during the 1910s with these unforgettable silent films. 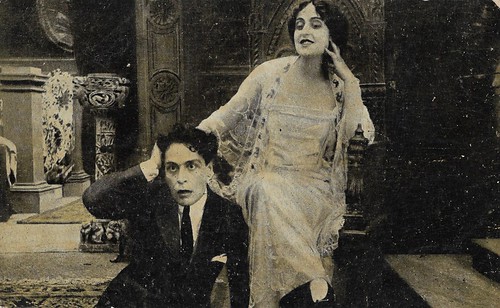 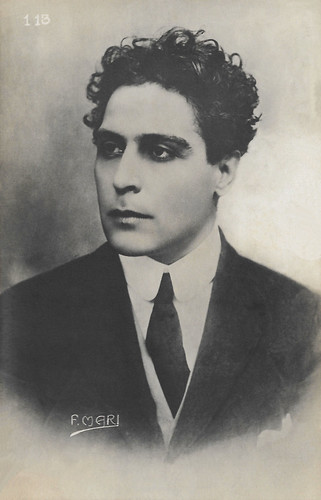 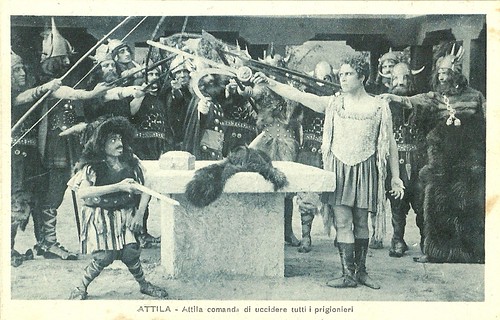 
Febo Mari was born in Messina, Sicily in 1881, as Alfredo Giovanni Leopoldo Rodriguez. His parents were Giovanni Rodriguez and Teresa Spadaro, and the Rodriguez family had Spanish aristocratic roots. When he was 14 he arranged with friends an improvised theatre school and wrote his first play. His parents considered it children’s play and let him be, as long as he continued his school.

Following his parents’ wishes, Alfredo Rodriguez studied and obtained his degree in Humanities, after which he moved to Milan to start working as a theatre critic for a Milanese journal. Soon however he decided to change jobs and debuted on stage himself.

As a young actor, he started to work with various acclaimed theatre companies, such as those of Virginia Reiter and Ferruccio Fumagalli. In 1911, he took over the direction of the Compagnia del Teatro Manzoni. One year after he became a member of the high-standing theatre company of Marco Praga, with Tina Di Lorenzo and Armando Falconi as the leading actors.

This theatre company was financed by Giuseppe Visconti, father of the future stage and screen director Luchino Visconti. In 1911, Arturo Ambrosio let him also make his screen debut in the film L’innocente/The Innocent (1911), an adaptation of the novel by Gabriele D’Annunzio.

In 1912 he directed his first film at the Ambrosio studio, Il critic/The Critic, starring Mari himself and Fernanda Negri Pouget. 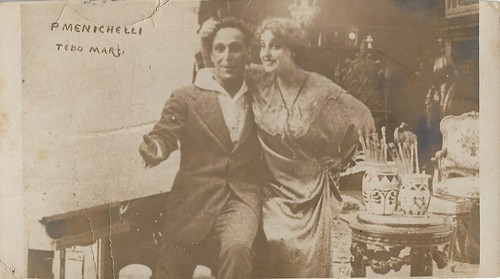 Old, faded photocard, reproducing a still from the diva film Il Fuoco (Giovanni Pastrone, 1915), starring Pina Menichelli and Febo Mari. Photo: Itala Film. Probably produced for the Iris Cinema in Cairo, Egypt. The cinema opened in 1912 as Teatro Iris and was situated on 13, rue Rosette, in Alexandria. Around 1915 it was one of the main five cinemas of Alexandria, having a capacity of 1000 people. In 1925 it was re-inaugurated. It was titled Cinema Fouad later on, just like rue Rosette became Fouad Street. The top and bottom of the card seem to have been cut off, so possibly this card stems from an album. The card represents the moment the aristocratic lady inspires the painter to make his masterpiece. 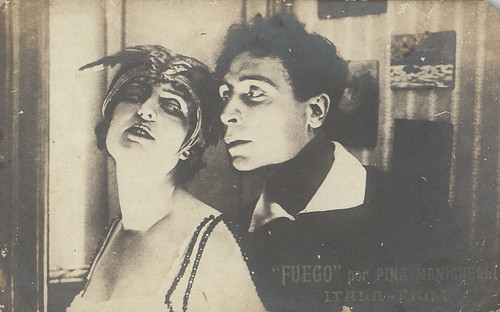 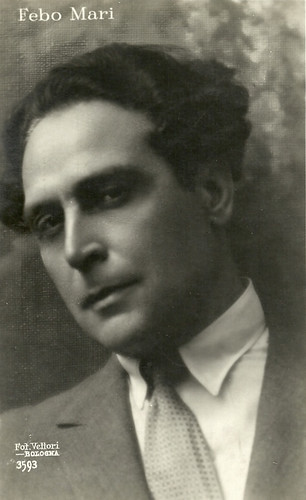 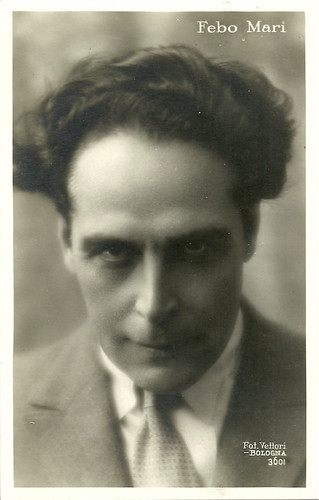 
Do it! It is beautiful!


In 1912, Febo Mari passed over to the Itala company, led by producer-director Giovanni Pastrone.He first acted opposite ‘monstre sacré’ of the stage Ermete Zacconi in Padre/Father (Dante Testa, Gino Zaccaria, 1912). He had the supporting part of the son of the enemy of Zacconi’s character Vivanti, in love with Vivanti’s daughter.

Mari had the male lead in Il fuoco/The Fire (Giovanni Pastrone, 1915) as a poor painter who falls in love with a rich femme fatale (Menichelli) and follows her to her castle. He paints her portrait which becomes a success, but she drugs and flees him when her husband returns. When afterwards she refuses to recognise the desperate artist as her husband and circle is around her, he goes berserk and will end his days in a madhouse.

Then again, she had warned him before that their love would only be short but fierce like a flame... Il fuoco/The Fire (Giovanni Pastrone, 1915) was a worldwide success, though the film was criticised as the femme fatale is not punished in the end.

Pastrone’s subsequent film, Tigre reale/Royal Tiger (Giovanni Pastrone, 1916), is only thinly based on a story by Giovanni Verga. Mari is seen in the supporting part of a Russian lover who commits suicide when Menichelli’s character, countess Natka, refuses him. When he threatens to shoot himself, she cries: "Do it! It is beautiful!", though she repents when he has killed himself.

With these films, handsome Febo Mari became one of the major male stars of the Italian silent screen. 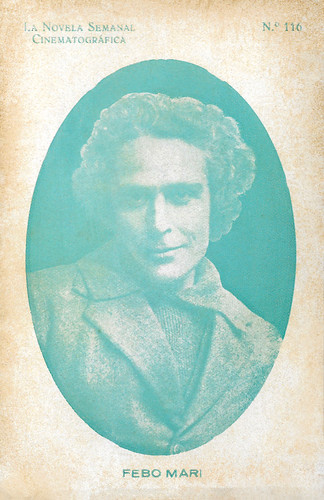 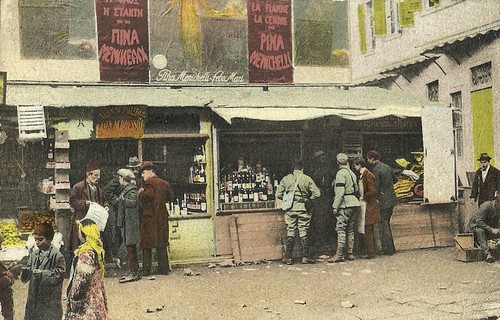 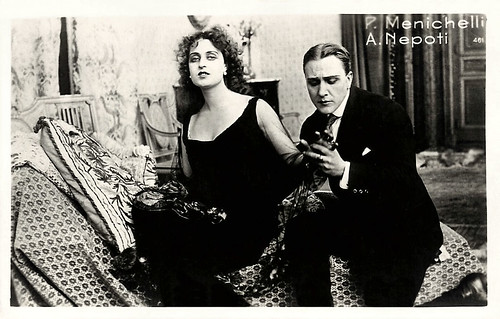 Artists and their unfaithful models


In 1915 Febo Mari directed Ermete Zacconi in L’emigrante/The Emigrant, in which an old man sells his belongings to find fortune in Argentine while his wife and daughter stay behind. There he encounters so many mishaps, that deluded him to return to Italy, reinforce his family ties and leave behind the idea of easy money.

In 1916 he made La gloria/The Glory, a now lost film with a typical plot on artists and their unfaithful models. A sculptor (Mari) protects a poor girl (Valentina Frascaroli) who becomes his model and inspires his masterpiece. However, when he is seriously injured, the girl gets tired of him and dumps him for an old art merchant. During a storm he saves his masterpiece and thus finds his forces, but when the girl returns he chases her away and destroys his artwork.

In 1916 Mari returned to Ambrosio where he directed Cenere/Ashes, based on the novel by Grazia Deledda and starring the stage diva Eleonora Duse in her only film. The film was largely shot on location in Sardegna and in simple interiors, like a Kammerspiel. It deals with Rosalia, a poor mother who leaves her son Anania to the natural father, well-to-do and married.

Years after, Rosalia has become destitute. Anania is about to marry a fancy girl (played by Mari’s second wife Misa Mordeglia Mari aka Nietta Mordeglia). Though disappointed that his mother had abandoned him in childhood, he wants to invite his mother to the wedding. But the girl dislikes the mother, so the poor woman loses her son once more. She dies, and Anania arrives too late.

Contrasting Mari’s rather heavy gesticulation, Duse showed more restraint, fitting to her reputation for Scandinavian-like acting on stage. A tinted nitrate print at the George Eastman House was used for the colour restoration of the film by the Cineteca del Friuli and the Cineteca Sarda, which had its premiere in 1992 at the Giornate del Cinema Muto. 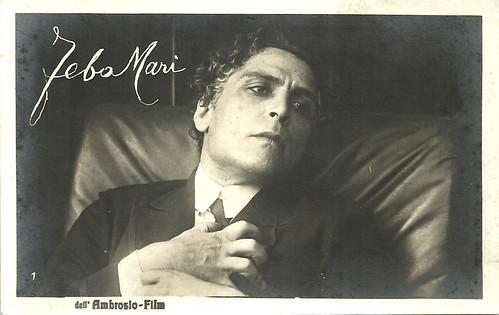 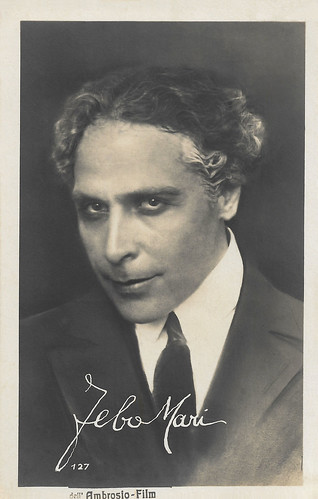 The romance of a faun


In 1917 Febo Mari directed Il Fauno/The Faun, a reverse Pygmalion-themed film starring Mari’s wife Nietta Mordeglia as a model who is neglected by her husband, a sculptor (Vasco Creti). She dreams the marble faun her husband has made (Febo Mari) becomes alive and they fall in love.

A rich female collector (Helena Makowska) buys the statue but underway it falls from a cart and becomes alive once more. The model and the faun live their romance in nature until a jealous hunter (Oreste Bilancia) shoots him and he becomes stone once more. A tinted copy of the film was found and restored.

Subsequently, he founded his own company Mari Film in 1918. He directed a few films for this company with Nietta Mordeglia as the female protagonist or antagonist. These films included …e dopo?/And after...? (1918), L’orma/The Footprint (1919), Giuda/Judah (1919), and Casa di bambola/A Doll's House (1919) after Henrik Ibsen's play.

In co-direction with Roberto Roberti, Mari made Maddalena Ferat (1920) starring Francesca Bertini, the period piece Triboulet (1923) with Umberto Zanuccoli in the title role, and La torre di Nesle/The Tower of Nesle (1925), with action hero Celio Bucchi. La torre di Nesle was Mari’s last film direction, but he continued to act in the film. He appeared in the late silent films Mese mariano/The Month of Mary (Ubaldo Pittei, 1929) and Assunta Spina (Roberto Roberti, 1930), in which he played Michele opposite Rina De Liguoro as Assunta. 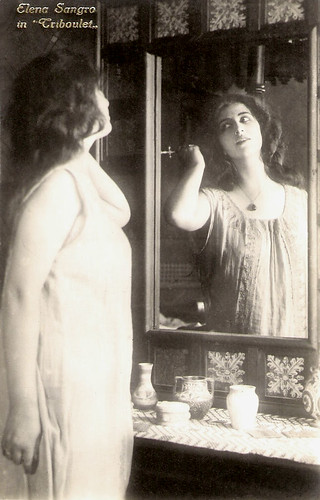 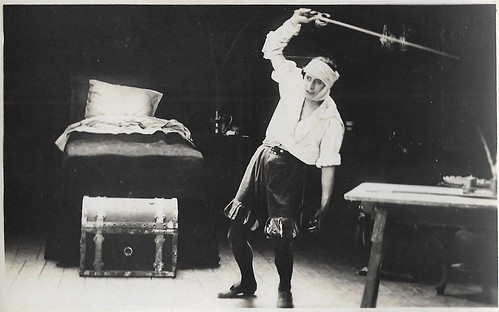 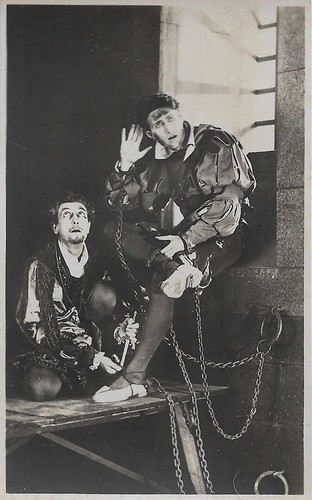 
In the sound era, in the 1930s, Febo Mari’s film parts were scarce. He was the billionaire in the Italian version of the multi-language film I tre desideri/The Three Wishes (Kurt Gerron, Giorgio Ferroni, 1937), a Milanese theatre director (!) in Giuseppe Verdi/The Life of Giuseppe Verdi (Carmine Gallone, 1938), and he had a supporting part in Lotte nell'ombra/Battles in the Shadow (Domenico Gambino, 1939).

In the late 1930s, Mari was active in radio plays, both comedy and drama, at the Roman radio studio EIAR. Febo Mari died in Rome in 1939. He was 55. He had played his last film part in Il conte di Brechard/The Count of Brechard (Mario Bonnard, 1940), starring Amedeo Nazzari. The film was released after Mari’s death.

Febo and Misa Mordeglia Mari's daughter was actress Isa Mari. Isa Mari also worked as a script supervisor for a.o. Federico Fellini’s La dolce vita (1960) and was the author of the novel Nella città l’inferno (Hell in the City).

Her novel about women in prison was adapted by director Renato Castellani as Nella città l’inferno/...and the Wild Wild Women (1959) starring Anna Magnani and Giulietta Masina.

Italian postcard for the Ambrosio film Attila (1918) by Febo Mari and starring himself in the title role. Translation caption: The torture of a girl by orders of Attila.

Italian postcard for the Ambrosio film Attila (1918) by Febo Mari and starring himself in the title role. Translation caption: Saint Genevieve announces that Attila is retreating.

Italian postcard for the Ambrosio film Attila (1918) by Febo Mari and starring himself in the title role. Translation caption: The Huns advance while killing and burning all over the Venetian plains.