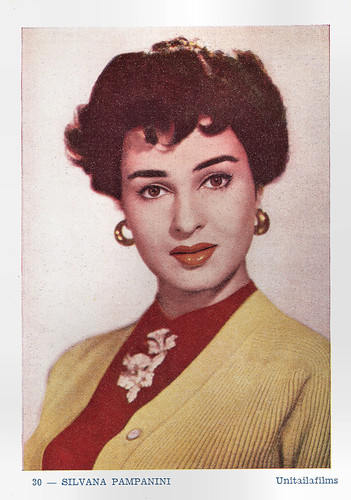 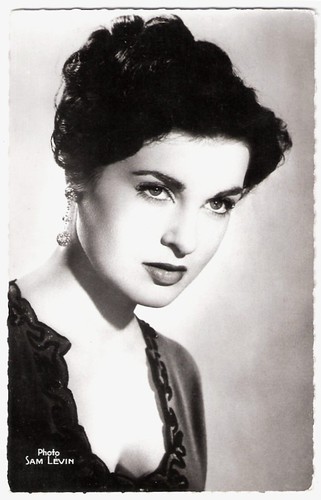 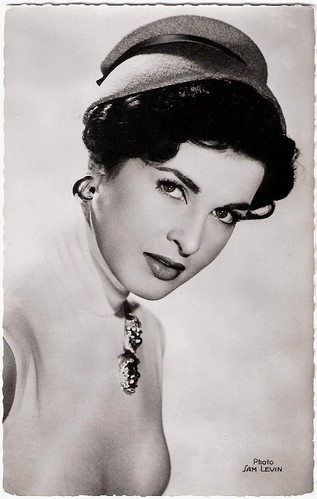 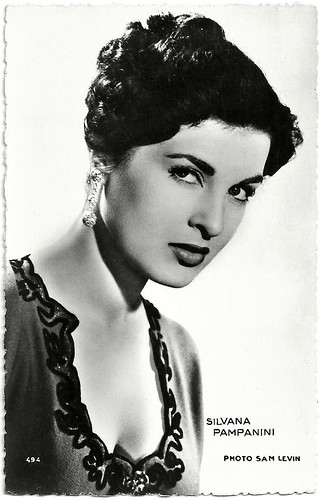 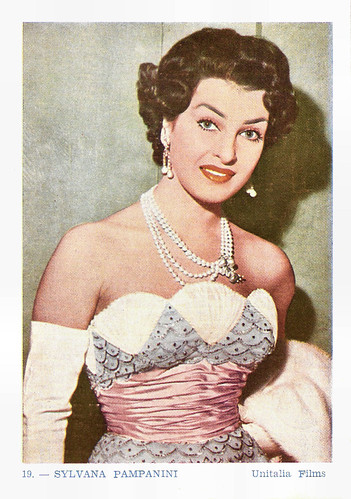 The Toast of Weeklies and Film Magazines

Silvana Pampanini was born in Rome in 1925. Her family had moved there from the Veneto some three centuries ago.

Pampanini got her law degree during the war and visited the Conservatory of Santa Cecilia where she got a degree in piano and song. As a singer, the young Pampanini made career within entertainment music. Her songs were widespread on unique records, and she even got an audience with pope Pio XII. Over the years she also was a frequent visitor of the opera seasons. Her cousin was the soprano Rosetta Pampanini.

When the Second World War was over, her singing master inscribed her for the Miss Italia contest in Stresa in September 1946. She ended second, but the public reacted fiercely against the decision of the jury to elect Rossana Martini. For the public, Silvana should have been the winner, but the jury did not change its decison and Martini stayed the official Miss Italia. However for Pampanini, her Miss Italia Runner-up title was her introduction to a career in the cinema.

Pampanini made her debut in the film L’Apocalisse/Apocalypse (Giuseppe Maria Scottese, 1948) and went on to perform in various films, often musicals. She became also the toast of weeklies and film magazines. Her father, who originally had been against his daughter's acting career, became her agent. Even if she was dubbed in her first roles, Pampanini became a star. 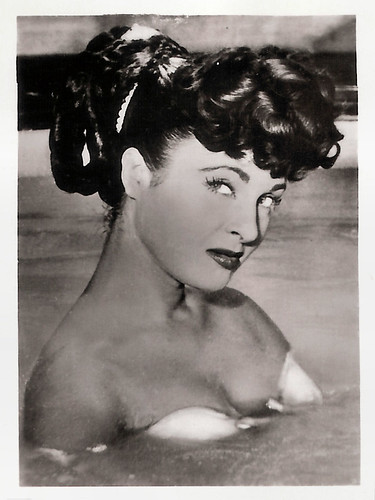 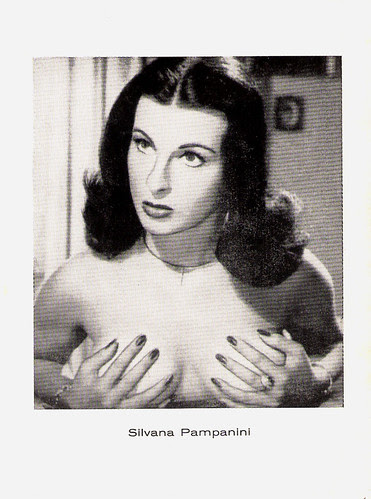 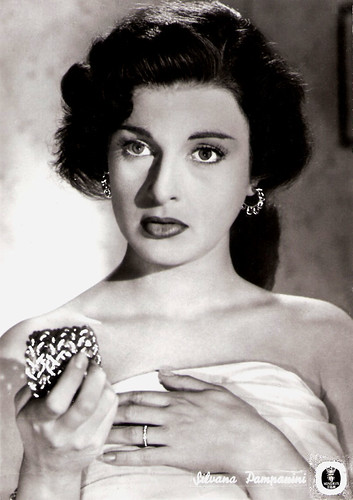 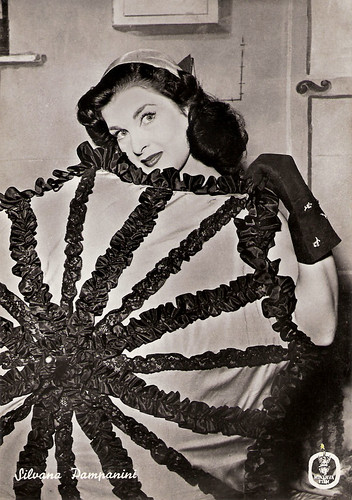 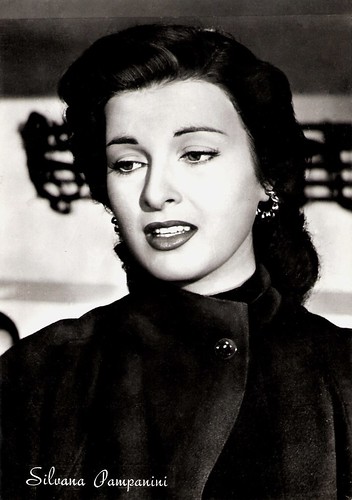 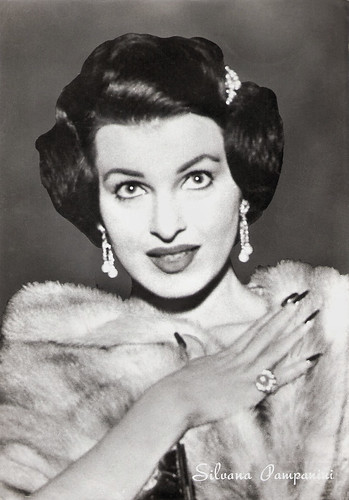 Beauty on a Bike

In the 1950s, Silvana Pampanini played in one film after another and many of her films were distributed worldwide. Well known was for instance the Dino de Laurentiis production I pompieri di Viggiù/The Firemen of Viggiu (Mario Mattoli, 1949), with Totò. Ennio Flaiano considered it rather a series of vaudeville acts than a film, and thus preceding TV vaudeville.

With the Quo vadis? parody OK Nerone/O.K. Nero (Mario Soldati, 1951), Pampanini had her first international success as Empress Poppea, opposite Gino Cervi as Nero, and Walter Chiari and Carlo Campanini as two American sailors who dream that they are in Nero’s Rome. In the romantic comedy Bellezze in bicicletta/Beauties on a Bike (Carlo Campogalliani, 1951) she formed a pair with Delia Scala and sang one of the most beloved songs of the time: Bellezza in bicicletta.

In 1953 Pampanini played in an episode of Un giorno in pretura (Steno, 1953) for which her make-up man transformed her in a lady 30 years older. That year she was also the title character in the melodrama Un marito per Anna Zaccheo/A Husband for Anna (Giuseppe de Santis, 1953), which costarred Amedeo Nazzari and Massimo Girotti. 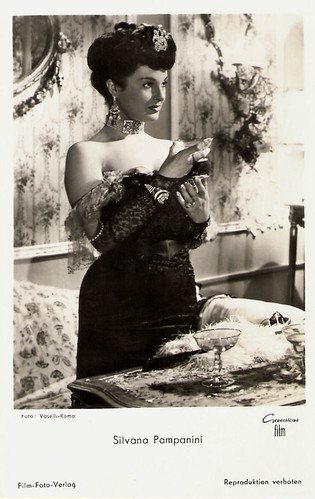 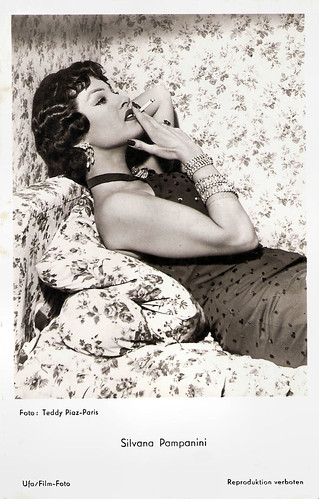 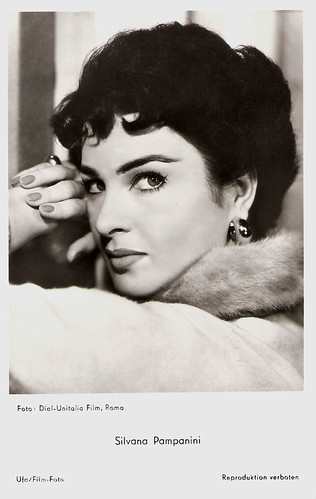 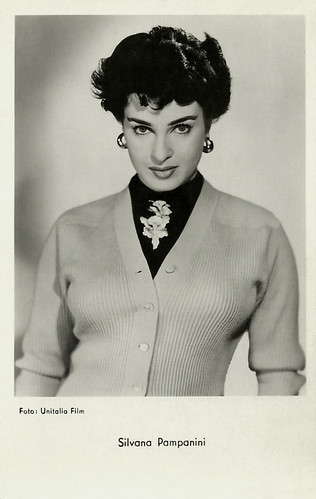 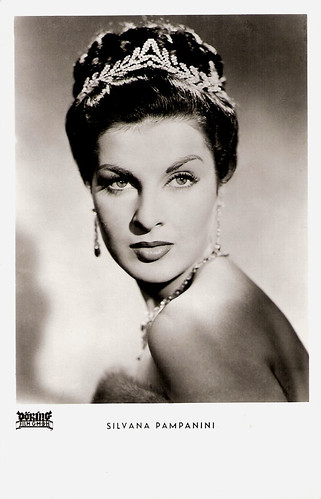 Even when she was in America, Silvana Pampanini refused to act in Hollywood, presumably because her English was not good enough. She did play in France, where she was known as Niní Pampan. Examples are La tour de Nesle/Tower of Lust (Abel Gance, 1955) in which she played Marguerite de Bourgogne opposite Pierre Brasseur as Jehan Buridan, and La loi des rues/Law of the Streets (Ralph Habib, 1956), with Raymond Pellegrin.

She also played in films in Spain, where she starred in La principessa delle Canarie/The Island Princess (Paolo Moffa, Carlos Serrano de Osma, 1954), Germany, Greece, Yugoslavia, Egypt, Argentine, and in particular in Mexico, where she played in some films that never were released in Italy, such as Sed de amor/Thirst for Love (Alfonso Corona Blake, 1959) with Pedro Armendariz, and the comedy Napoleoncito (Gilberto Martinez Solares, 1964).

In the meantime the yellow press published about Pampanini's flirts with prince Ahmad Shah Khan, Tyrone Power, William Holden, George DeWitt, Omar Sharif, Orson Welles, king Faruq of Egypt and others. Pampanini herself told that her one true love, a ten years older man, not involved in cinema and never identified, died of a disease one month before their wedding. After a brief experience as director and screenwriter in 1958, Pampanini slowed down her film career and focused on radio and TV, where she worked as announcer and host.

In 1964 Dino Risi directed her in Il gaucho/The Gaucho (Dino Risi, 1964), a partly autobiographical film in which Silvana played a declining diva, who pathetically searches for her lost glory and for a millionaire to marry. In 1966, after a career of twenty years, Pampanini retired in order to assist her aging parents whom she took care of till their death. She returned for one last role as a prostitute in an episode of Mazzabubù... Quante corna stanno quaggiù? (Mariano Laurenti, 1971) with Giancarlo Giannini and Sylva Koscina. After that she was only visible once more, as herself in Tassinaro (Alberto Sordi, 1983).

In the TV mini-series Tre stelle (Pier Francesco Pingitore, 1999) she had a bit part as the old mother of Alba Parietti and in the fall of 2002 she hosted the TV-show Domenica In during two months. Pampanini was devoted to Padre Pio and San Antonio. She never married nor had any children. However, she was proud that once Totò proposed to her, on the set of 47 morto che parla (Carlo Ludovico Bragaglia, 1950), even if he asked in vain.

In her roaring years Pampanini was not very beloved by the critics and she did not receive important awards, which caused her in her autobiography Scandalosamente perbene (Shockingly respectable, 1996), to compare herself with Greta Garbo. Pampanini never was afraid to keep silent, so in December 2006 she publicly mocked Gina Lollobrigida for marrying a much younger man, and when in 2008 mayor Walter Veltroni did not invite her for the Festa del Cinema in Rome, she started a serious polemic.

In 2007 she did participate in the festivities of 70 years Cinecittà and in 2009 she hosted the Mostra del Cinema dello Stretto which brought a warm welcome and the recognition of her career. Though living in Monaco, Pampanini was nominated Grande ufficiale dell'ordine al merito della Repubblica Italiana in 2003 by president Ciampi. In September 2009 she returned at the Venice film festival for the projection of the restored version of Noi cannibali/We Cannibals (Antonio Leonviola, 1953), a film inserted in the section Questi fantasmi 2 (These ghosts 2), dedicated to Italian films to be reconsidered. Silvana Pampanini died on 6 January 2016 in Rome, Italy. 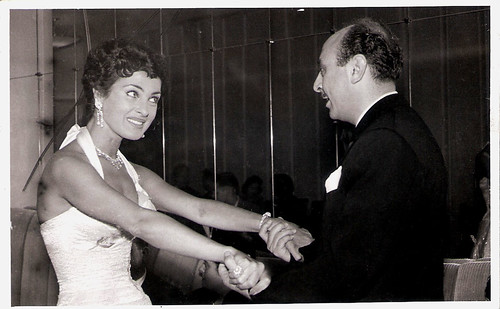 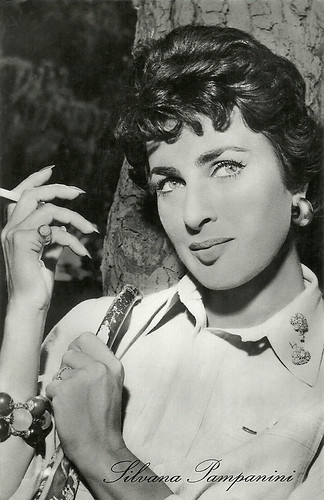 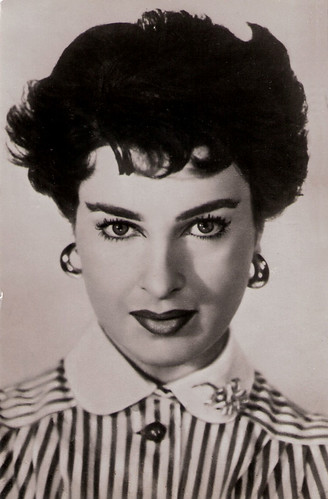 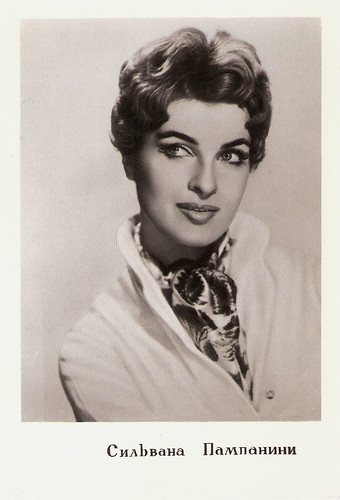 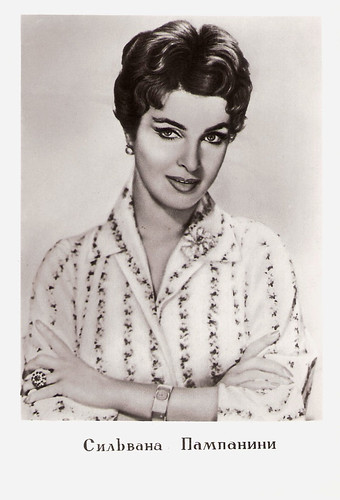 
Scene from Bellezze in bicicletta/Beauties on a Bike (1951). (No subtitles). Source: always the sun (YouTube).

What a beautiful woman !