Imported from the USA: Yul Brynner

Yul Brynner (1920–1985), famous for his completely bald head, was a Russian-born United States-based film and stage actor. He was best known for his portrayal of King Mongkut of Siam in the Rodgers and Hammerstein musical The King and I. He played the role 4,625 times on stage and won two Tony Awards. For the film version, The King and I (Walter Lang, 1956), he also won the Academy Award. The following decades, he starred in a wide range of roles from Egyptian pharaohs to Western gunfighters, both in Hollywood and European films. 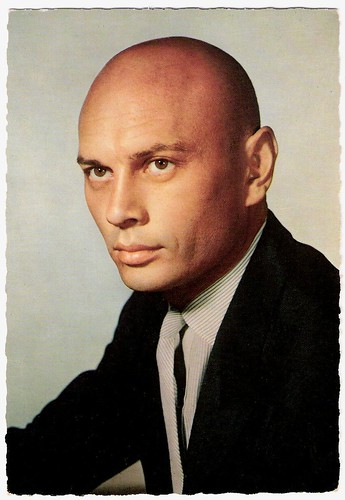 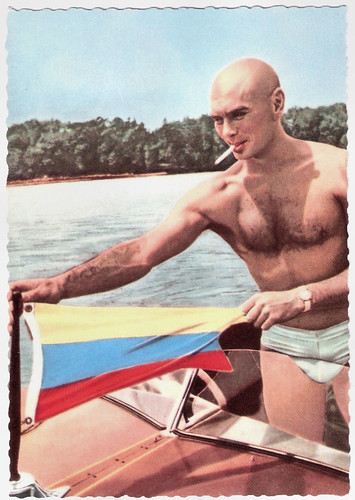 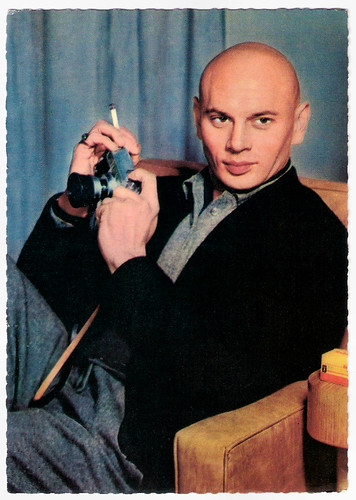 Yul Brynner was born Yuly Borisovich Briner (Russian: Юлий Борисович Бринер) in Vladivostok, Far Eastern Republic (present-day Vladivostok, Russia) in 1920. His father, Boris Yuliyevich Briner, was a mining engineer and inventor. Brynner's mother, Marousia Dimitrievna (née Blagovidova), came from the Russian intelligentsia and studied to be an actress and singer. In 1923 his father fell in love with an actress, Katya Kornukova, at the Moscow Art Theatre, and soon after abandoned his family.

Yul's mother took him and his sister, Vera, to Harbin, China, where they attended a school run by the YMCA. In 1932, fearing a war between China and Japan, she took them to Paris. Brynner played his guitar in Russian nightclubs in Paris, sometimes accompanying his sister, playing Russian and Roma songs. He trained as a trapeze acrobat and worked in a French circus troupe for five years, but after sustaining a back injury, he turned to acting. In 1940, speaking little English, he and his mother emigrated to the United States, where his sister already lived.

During World War II, Brynner worked as a French-speaking radio announcer and commentator for the US Office of War Information, broadcasting propaganda to occupied France. At the same time, he studied acting in Connecticut with the Russian teacher Michael Chekhov. He toured the country with Chekhov's theatrical troupe. Brynner’s first Broadway performance was a small part in William Shakespeare's Twelfth Night (1941). Brynner found little acting work during the next few years. He did some modelling work and was photographed nude by George Platt Lynes.

Brynner's first marriage was to actress Virginia Gilmore in 1944, and soon after he began working as a director at the new CBS television studios, directing Studio One, among other shows. In 1946, he co-starred in a production of Lute Song with Mary Martin. He made his film debut in the Film Noir Port of New York (László Benedek, 1949) with Scott Brady.

The next year, at the urging of Mary Martin, he auditioned for Richard Rodgers and Oscar Hammerstein II's new musical, The King and I (1951). Brynner became an immediate sensation. The part of King Mongkut would become his most famous role which he played 4625 times on stage. Brynner shaved his head for his role and continued to shave his head for the rest of his life. Brynner's shaven head was unusual at the time, and his striking appearance helped to give him an exotic appeal. He won Tony Awards for both the first production in 1951 as for the Broadway revival in 1985. 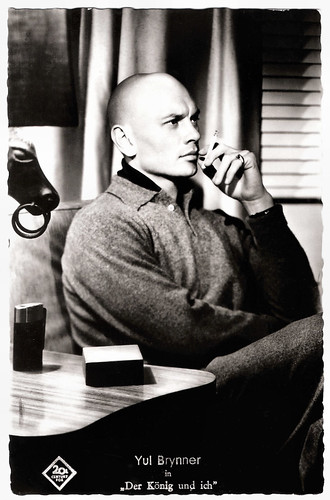 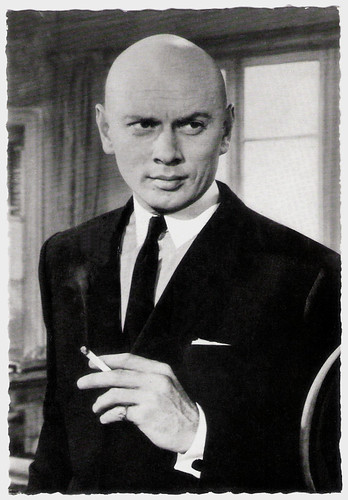 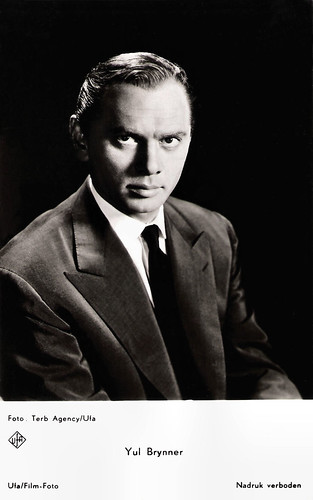 In 1956, Yul Brynner also appeared in the film version, The King and I (Walter Lang, 1956), opposite Deborah Kerr. For his role he won an Academy Award as Best Actor. Brynner is one of only nine people who have won both a Tony Award and an Academy Award for the same role. He quickly gained superstar status with his roles as Pharaoh Rameses II opposite Charlton Heston's Moses in the blockbuster The Ten Commandments (Cecil B. DeMille, 1956) and as General Bounine in the historical drama Anastasia (Anatole Litvak, 1956) opposite Ingrid Bergman.

He made the 'Top 10 Stars of the Year' list in both 1957 and 1958. He co-starred with Lee J. Cobb in The Brothers Karamazov (Richard Brooks, 1958), based on Fyodor Dostoevsky's novel. Brynner starred as Solomon opposite Gina Lollobrigida in the epic Solomon and Sheba (King Vidor, 1959), and as Chris Adams in the Western The Magnificent Seven (John Sturges, 1960) with Eli Wallach, Steve McQueen, and Horst Buchholz. The film was a box office disappointment in the United States, but proved to be such a smash hit in Europe that it ultimately made a profit.

Over the next two decades, Brynner appeared in more than 40 other films. In the early 1960s, he starred in Taras Bulba (J. Lee Thompson, 1962) and Kings of the Sun (J. Lee Thompson, 1963). He co-starred with Marlon Brando in Morituri (Bernhard Wicki, 1965), and with Katharine Hepburn in The Madwoman of Chaillot (Bryan Forbes, 1969).

In Europe, Brynner appeared in the Anglo-French war film Triple Cross (Terence Young, 1966) with Christopher Plummer and Romy Schneider, in the Yugoslavian partisan film Bitka na Neretvi/Battle of Neretva (Veljko Bulajić, 1969) and the British thriller The File of the Golden Goose (Sam Wanamaker, 1969). He also appeared in drag as a torch singer in an unbilled role in the Peter Sellers comedy The Magic Christian (Joseph McGrath, 1969).

In the following decade, he played a gunslinger robot in the Science fiction Western-thriller Westworld (Michael Crichton, 1973) and returned in its sequel Futureworld (Richard T. Heffron, 1976). Among his final feature film appearances were the titular role in The Ultimate Warrior (Robert Clouse, 1975) and his role opposite Barbara Bouchet in the Italian film Con la rabbia agli occhi/Death Rage (Antonio Margheriti, 1976).

Later in life, Brynner was an active photographer and wrote two books. His daughter Victoria put together Yul Brynner: Photographer a collection of his photographs of family, friends, and fellow actors, as well as those he took while serving as a UN special consultant on refugees. Brynner wrote Bring Forth the Children: A Journey to the Forgotten People of Europe and the Middle East (1960), with photographs by himself and Magnum photographer Inge Morath, and The Yul Brynner Cookbook: Food Fit for the King and You (1983).

Yul Brynner died of lung cancer in 1985, in New York City. He married four times. His first three marriages ended in a divorce. Brynner had a long affair with Marlene Dietrich, who was 19 years his senior, beginning during the first production of The King and I in 1951. He fathered three children and adopted two. His oldest son Rock wrote a book about his father and his family history titled Empire and Odyssey: The Brynners in Far East Russia and Beyond (2006). 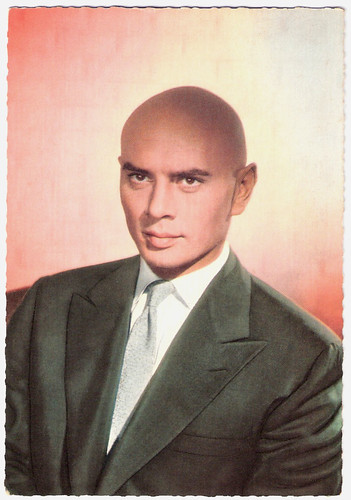 German postcard by ISV, no. B 20. Photo: MGM. Publicity still for The Brothers Karamazov (Richard Brooks, 1958). 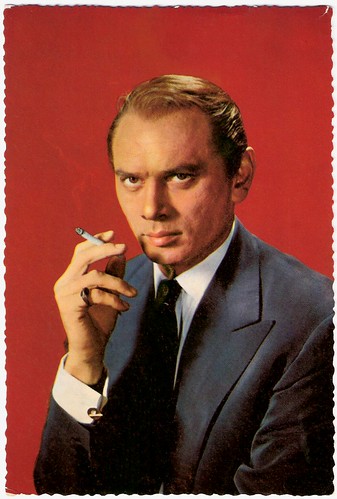 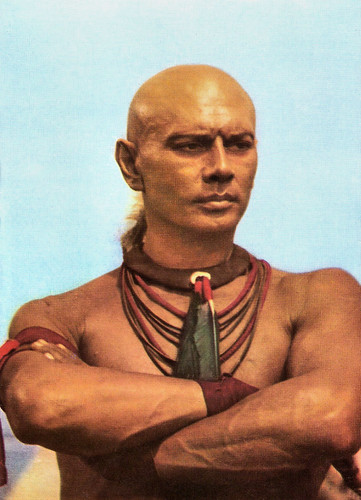