One Hundred Million views for Truus, Bob & Jan Too!

Last Night, we counted the 100.000.000th view for our sibling site Truus, Bob & Jan Too! at Flickr. Like many others we discovered social media around 2005 and started to upload our pictures at Flickr in 2007. After a while, 'Jan' began to post star postcards from his collection, and I joined him. A few months later this blog was born, ten years ago. And in the case you like to know which cards are the 15 most popular film star postcards ever at Truus, Bob & Jan Too!, here they are. 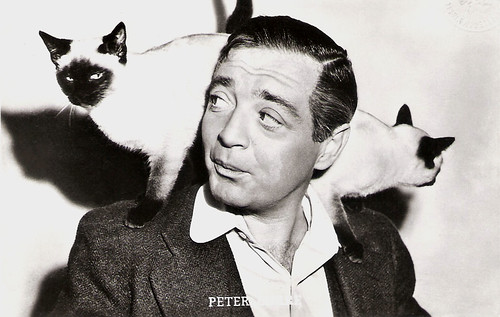 Peter Lorre (1904–1964) with his trademark large, popped eyes, his toothy grin and his raspy voice was an American actor of Jewish Austro-Hungarian descent. He was an international sensation as the psychopathic child murderer in Fritz Lang’s M (1931). He later became a popular actor in a two British Hitchcock films and in a series of Hollywood crime films and mysteries. Although he was frequently typecast as a sinister foreigner in the US, he also became the star of the successful Mr. Moto detective series. 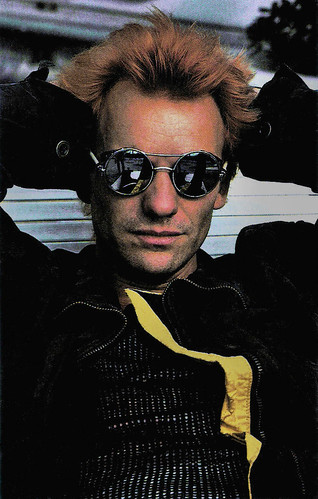 British rock artist Sting (1951) is best known as the pop star with the high-pitched, raspy voice and blonde, spiky hair. He made his breakthrough as the singer and bass player for The Police and then launched a successful solo career. Sting occasionally ventured into acting on both film and television. He was memorable as the Mod leader in Quadrophenia (1979) and as Eddie’s father in Lock, Stock and Two Smoking Barrels (1998). 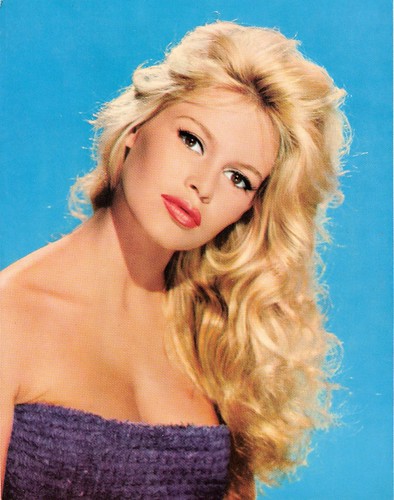 Beautiful French actress Brigitte Bardot (1934) was the sex kitten of the European film industry. BB starred in 48 films, performed in numerous musical shows, recorded 80 songs. After her retirement in 1973, she established herself as an animal rights activist. 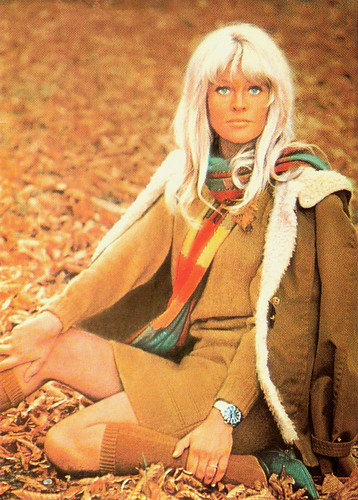 Smart and sexy Julie Christie (1941) is an icon of the new British cinema. During the Swinging Sixties she became a superstar with such roles as Lara in the worldwide smash hit Doctor Zhivago (1965). Since then she has won the Academy, Golden Globe, BAFTA, and Screen Actors Guild Awards. 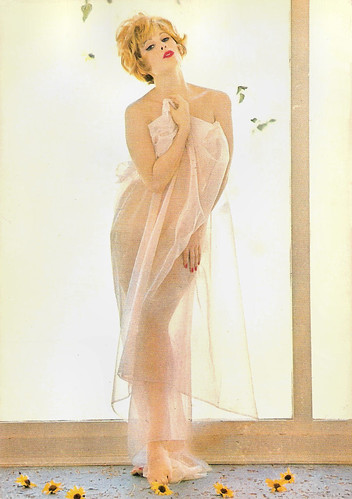 Voluptuous, red-haired American actress Jill St. John (1940) played countless bikini sexpot roles in Hollywood films of the 1960s. She was at her best as the tantalizing Bond girl Tiffany Case in Diamonds Are Forever (1971).

British postcard in the Picturegoer Series, London, no. D 551. Photo: J. Arthur Rank Organisation. Publicity still for Romeo and Juliet (1954). Comment by Asa2BobNote9: "Very interesting bio. Reassuring to learn he was bi-sexual. I always thought so - there were plenty of clues. He's mentioned quite a lot in Noel Coward's diaries."

Handsome Lithuanian-born actor Laurence Harvey (1928–1973) achieved fame as the Jack the Lad of British cinema. He is best known for his lead performance as a ruthless social climber in Room at the Top (1959). 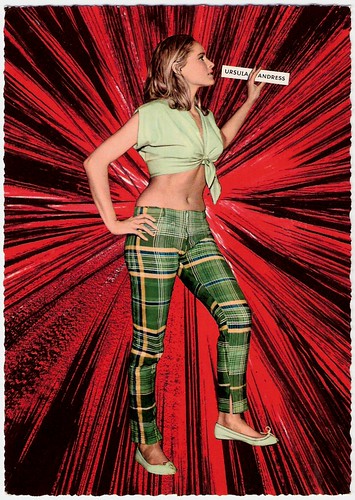 German postcard by Krüger, nr. 902/412. Comment by Roloff de Jeu: "What a wild trippy photograph! She's got a pair of hot pants (not hotpants) too!"

Stunning Swiss sex symbol, starlet and jet-setter Ursula Andress (1936) will always be remembered as the first and quintessential Bond girl. In Dr. No (1962), she made film history when she spectacularly rises out of the Caribbean Sea in a white bikini. Though she won a Golden Globe Ursula's looks generally outweighed her acting talent and she never took her film career very seriously. 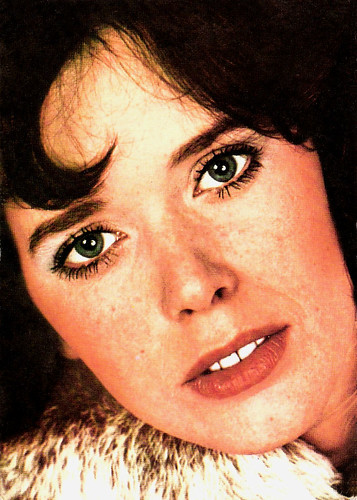 Romanian postcard by Casa Filmului Acin. Comment by Richard Arte Digital: "I will be forever in love with those eyes! The most suggestive look on film. Thanks for sharing it!"

Dutch actress Sylvia Kristel (1952-2012) will always be remembered as Emmanuelle, thanks to the massive soft-porn hit of the 1970s. Emmanuelle’s sexual adventures attracted 500 million people to the cinema. 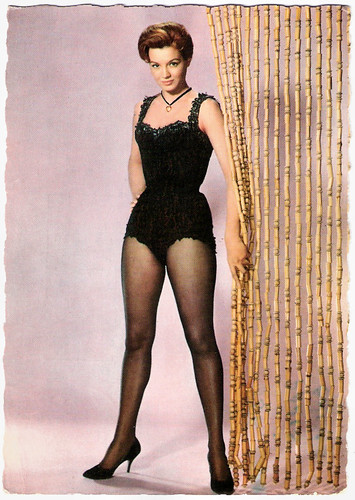 French postcard by E.D.U.G., no. 51. Comment by Tony Jom: "A great actress. Great photo." Comment by GoodGuyGoneBad: "I have done so many searches on her and have never seen this one. Dayum"

American actress Angie Dickinson (1931) has appeared in more than 50 films and starred on television as Sergeant Leann 'Pepper' Anderson in the successful 1970s crime series Police Woman. Her trade marks are her honey blonde hair (on the postcard she still has her original brunette hair colour), her large brown eyes, a voluptuous figure and her deep sultry voice. 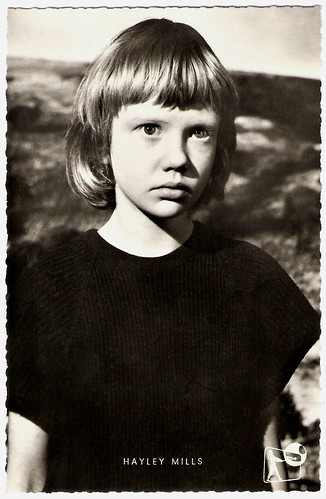 English actress Hayley Mills (1946) began her acting career as a popular child star and was hailed as a promising newcomer for Tiger Bay (1959), and Pollyanna (1960). During the late 1960s she played in more mature roles. Although she has not maintained the box office success she experienced as a child actress, she has always continued to make films. 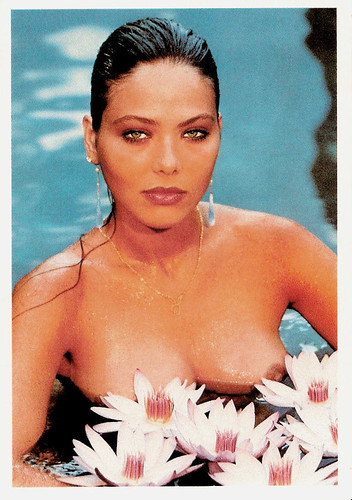 French postcard by Humour a a la Carte, Paris, no. ST-150. Comment by Steve Taylor: "I would not mind receiving this in the post and nor would the postman". 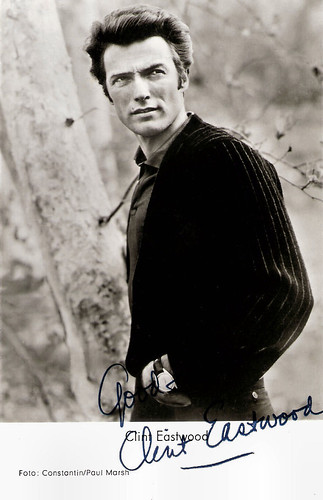 American film actor and director Clint Eastwood (1930) rose to fame as the Man with No Name in Sergio Leone's classic Spaghetti Westerns Per un pugno di dollari/A Fistful of Dollars (1964), Per qualche dollaro in più/For a Few Dollars More (1965), and Il buono, il brutto, il cattivo/The Good, the Bad and the Ugly (1966). Later in the US, he played hard edge police inspector Harry Callahan in the five Dirty Harry films, which elevated him to superstar status, and he directed and produced such award-winning masterpieces as Unforgiven (1992), Mystic River (2003) and Million Dollar Baby (2004). 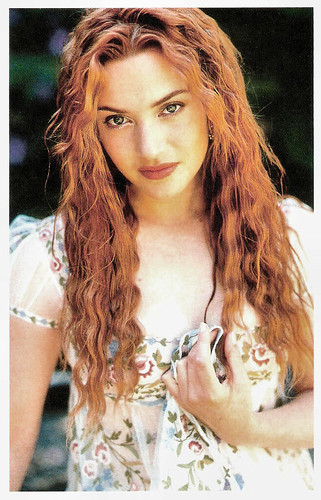 Belgian postcard by P Magazine, no. 37 in the series 'De mooiste vrouwen van de eeuw' (the 100 most beautiful women of the century). Photo: Sante D'Orazio / Outline. Comment by navarzo 21: "Kate has always been beautiful!"

Vivacious Kate Winslet (1975) is often seen as the best English-speaking film actress of her generation. The English actress and singer was the youngest person to acquire six Academy Award nominations, and won the Oscar for The Reader (2008). 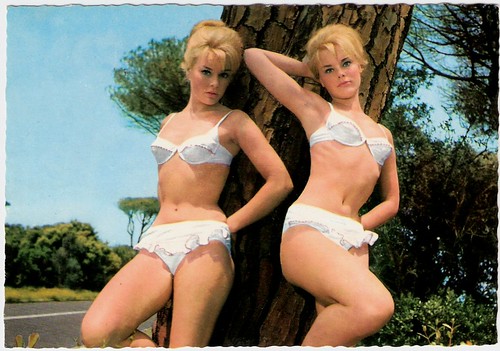 German postcard by Krüger, no. 900/300. Photo: Georg Michalke. Comment by Henry R: "Thanks t,b,n j. great bio n exhaustively done. always been a fan of elke sommer since 60's('deadlier than the male'-1st time seeing her). too bad no kids to pass her beauty."

In the late 1950s, blonde, German Elke Sommer (1940) was a European sex symbol before conquering Hollywood in the early 1960s. With her trademark pouty lips, high cheek bones and sky-high bouffant hair-dos, Sommer made 99 film and television appearances between 1959 and 2005. The gorgeous film star was also one of the most popular pin-up girls of the sixties, and posed twice for Playboy. 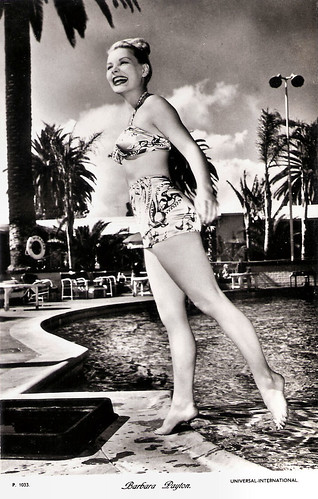 American film actress Barbara Payton (1927-1967) was a blue-eyed, peroxide blonde sexpot, less known for her films than for her stormy social life and eventual battles with alcohol and drug addiction. Her tale is one of the saddest ever to come out of Hollywood.

Thanks for visiting our Flickr site and also this blog, and let's go for the billion!

Hellow it's Maria from the Everything Croton blog in the states. Congratulations!