Gilbert Gil (1913-1988), originally Gilbert Moreau, was a French stage and screen actor, who mostly had supporting acts in French cinema between the mid-1930s and the early 1960s. He had a stage career in the same years. In the 1930s Gil represented the young nervous obstinate, the rebel, but he also had a natural charm. 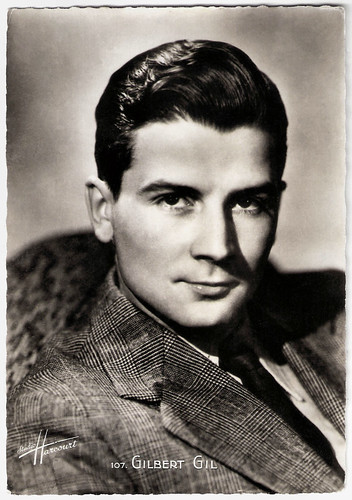 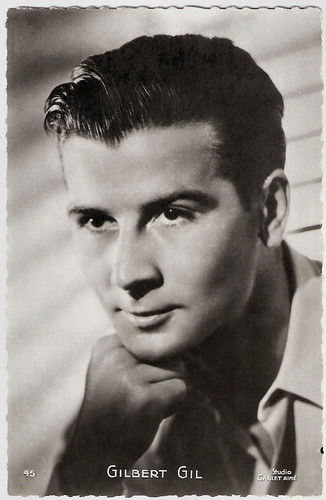 
Gilbert Jean Alphonse Moreau was born in Goussainville in l913. Soon after Gilbert's birth, his father Jean Moreau left his wife, after which she married his younger brother Jacques. Gilbert grew up within a bourgeois family that owned a large estate, thanks to his grandfather's foundry.

Gil became a handsome young lad, but with the insolence that often comes with it. He often quarrelled with his stepfather and grandfather, and finally moved to Paris. He inscribed at the Conservatoire and set his first steps on stage from 1930, e.g. incarnating a rebellious Arthur Rimbaud in the play 'Verlaine' by Rostand.

A bigger part Gil had as Pierrot, the young friend, acolyte, and protege of Pépé (Jean Gabin), the title character of Pépé le Moko (Jules Duvivier, 1937) on a gang leader in Algiers, hunted by the police. When Pierrot is betrayed to the police by informer Régis (Fernand Charpin) and returns to the Casbah, mortally wounded, Pépé takes revenge on Régis.

When Gil first played opposite Pierre Blanchar in the Oscar Wilde adaptation Une femme sans importance/A Woman of No Importance (Jean Choux, 1937), the two so looked alike, that it was rumoured that Blanchar was Gil's father. Raymond Bernard exploited this in his film Le Coupable/Culprit (Raymond Bernard, 1937), in which Gil is a young delinquent involved in murder. The prosecutor (Pierre Blanchar) proves to be his father. Two more films with the 'father' and 'son' would follow: Nuit de décembre/Night in December (Kurt Bernhardt, 1940) and Secrets (directed by Pierre Blanchar himself, 1942).

After several minor parts, Gil had a more substantial role in Gribouille/Heart of Paris (Marc Allégret, 1937). Here he is the son of a shopkeeper (Raimu) who has taken under his wings a Russian young woman (Michèle Morgan), who thanks to his testimony has been acquitted from murder. Father and son both rival for her affections, despite the fact there is still a mother around.

In 1938 Gil joined the French cast and crew of Le voleur des femmes/The Woman Thief (Abel Gance, 1938) travelling to the Pisorno studios in Italy, where the film was shot in both a French and an Italian version. In La Glu (Jean Choux, 1937-1938), Gil was a sailor who falls in love with Marie Bell. 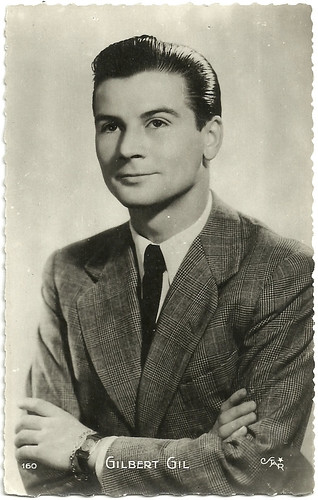 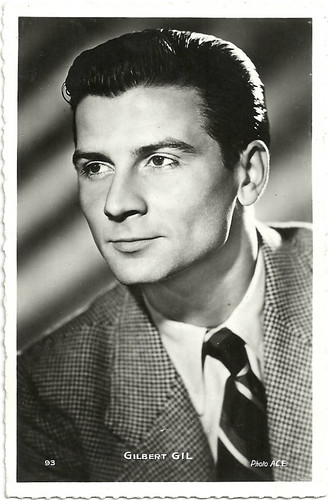 
During the war years, Gilbert Gil played e.g. the rebellious son of Jean-Louis Barrault's Hector Berlioz in La symphonie fantastique/The Fantastic Symphony (Christian-Jaque, 1941). In L'Assassin a peur la nuit/The assassin is afraid at night (Jean Delannoy, 1942), shot at and set in the South of France, Gil played the young worker friend of a thief on the run (Jean Chévrier), who tries to become honest and falls in love with his friend's sister (Louise Carlettti). Yet, the thief's past haunts him and a former mistress (Mireille Balin) pushes him to kill an antiquarian.

In Pierre et Jean/Pierre and Jean (André Cayatte, 1943), based on a novel by Guy de Maupassant, two brothers (Bernard Lancret and Gil) go through a crisis when they realise they are only half-brothers. Afterward, Gil joined the French actors in the resistance under the pseudonym 'Hortensia Bleu'.

Once the war was over, André Cayatte called him back to play a naive plaything of a femme fatale (Ginette Leclerc) in Le dernier sou/The Last Penny (André Cayatte, 1944). After the hardship of the war, comedy was welcomed, so Gil acted in e.g. Leçon de conduit/Lessons in Conduct (Gilles Grangier, 1945) at the end of which a bitch played by Odette Joyeux just doesn't manage to behave well.

In On demande un ménage/We ask for a household (Maurice Cam, 1945) he played the brother of Robert Dhéry, who is disguised as a woman for a practical joke (announcing more of these pranks in subsequent years).

In 1947, Gilbert Gil went behind the camera to direct the crime film Brigade criminelle/Criminal Brigade (Gilbert Gil, 1947). While appearing in front of the camera too, he also introduced Ellen Bersen, his future wife, who would have a short career as an actress. The film, though, was not a huge success and would remain Gil's unique film direction. 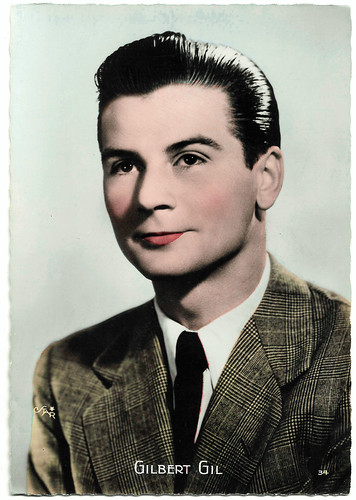 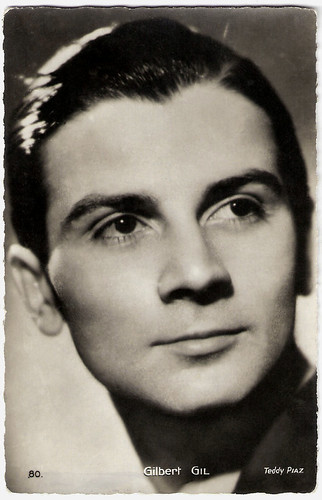 
During the 1950s, Gilbert Gil was as attracted to the city as he was to the scene. He attended many women, which did not prevent him from also being very close to the tandem Jean Cocteau / Jean Marais.

A young father himself, he appeared in Né de père inconnu/Born of Unknown Father (Maurice Cloche, 1950), a melodrama that had to remind him of something. At the same time, he hosted 'Le bar de l'escale', a series of nightly radio programs broadcast on Radio-Tunisie (1953).

Sacha Guitry, who liked him a lot, asked him to play Jean-Jacques Rousseau in Si Versailles m'était conté/Royal Affairs in Versailles (1953), Louis Bonaparte in Napoléon (1954) and Molière in Si Paris nous était conté/If Paris Were Told to Us (1955).

However, the new artistic wave, The Nouvelle Vague, and its competition of a new generation of actors made life harder for Gil. In the early 1960s, he played his last film parts, while he had a last performance in the TV series of Thierry la Fronde (1965).

Gilbert Gil married for the first time with Ellen Bernsen, with whom he had a son who would make a career as a diplomat. After his divorce of Bernsen, Gil remarried with Jeanne Poirson, and finally married for the third time, with Livine Le Tinnier, a notary clerk.

By the mid-1960s, Gilbert Gil, the rebel, was gradually forgotten, and he finally became a driving instructor. A big smoker, Gilbert Gil died of chronic emphysema in 1988, in the retirement home of Maison-Lafitte. His ashes are deposited in the cemetery of La Garenne Colombe. 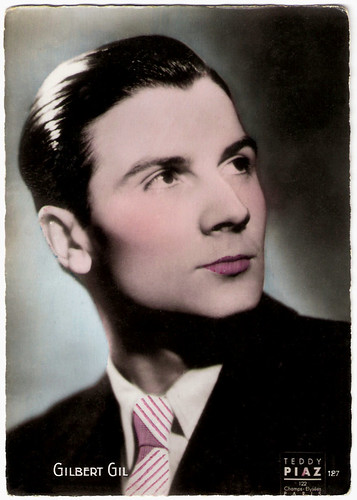 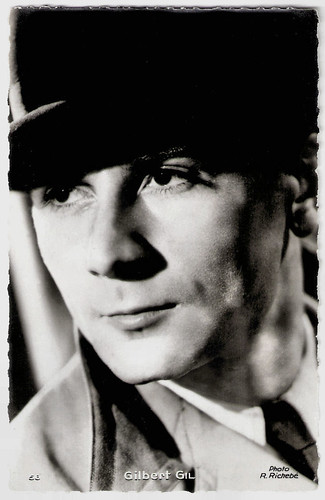 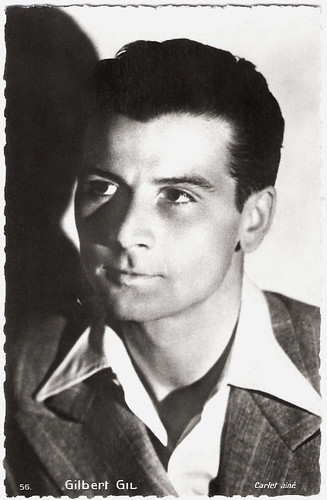